The Culture of Japanese Geisha

With their distinctive white make-up, elaborate hairstyles, and beautiful kimono, geisha are one of Japan’s most iconic cultural symbols. Yet they are also shrouded in mystery, with many tourists still wondering exactly what a geisha is and what they do. That’s where this post comes in! We’re going to shine a light on these enigmatic artisan entertainers, from the history of the profession to modern geisha performances – and how you can enjoy a dining experience with a geisha on your next trip to Japan. 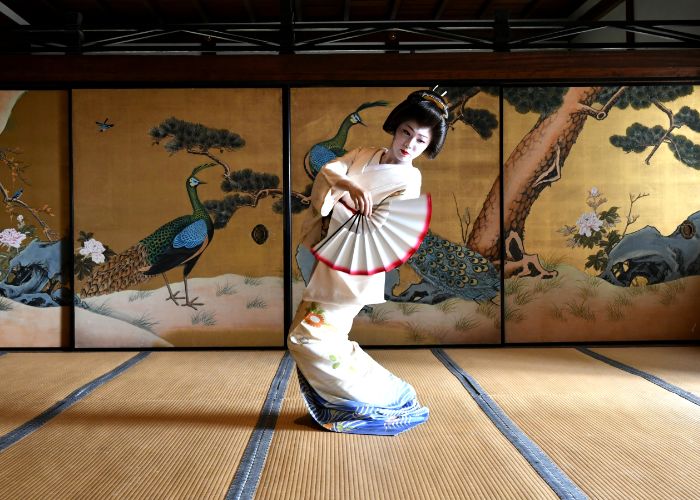 What is a geisha?

To answer this question, let’s first look at what geisha means in Japanese. The word is formed of two kanji characters: 芸 (gei), meaning art, and 者 (sha), meaning person. So we can literally translate geisha as meaning ‘a person of the arts’ or a performing artist.

More specifically, Japanese geisha are professional female entertainers who specialize in the country’s traditional cultural arts. They usually attend guests at exclusive teahouses and dinners, where they not only serve food and drink but also put on performances and engage in conversation and lighthearted games. There is an unfortunate misconception that geisha are courtesans or escorts, however, this is entirely false.

Geisha are trained in a wide variety of Japanese arts, including singing, dancing, and playing music on traditional instruments such as the koto and shamisen. They also study etiquette, poetry, tea ceremony, calligraphy, flower arranging, and other classical talents, becoming experts in a range of sophisticated cultural pursuits. 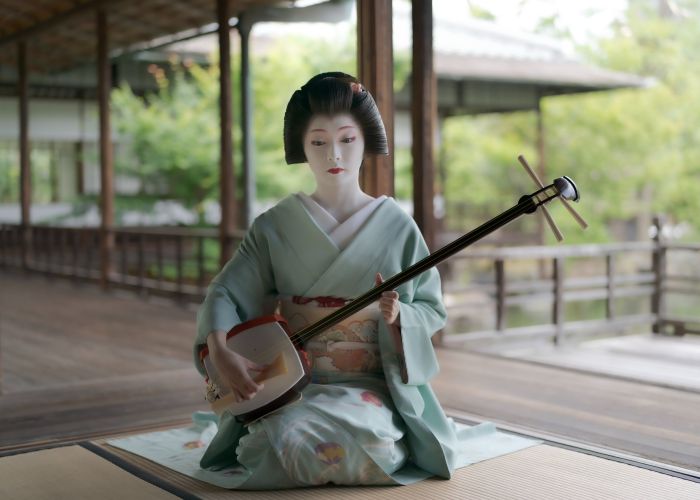 One reason people are sometimes uncertain about geisha is that they can be referred to by a few different terms. Although ‘geisha’ is the most common word used, there are some regional variations. For example, in Kyoto geisha are known as ‘geiko’ (芸子), while in Niigata they are referred to as ‘geigi’ (芸妓). In all cases, the words share the same first kanji – 芸, meaning art – and have the same overall concept as geisha meaning a performer of the arts. 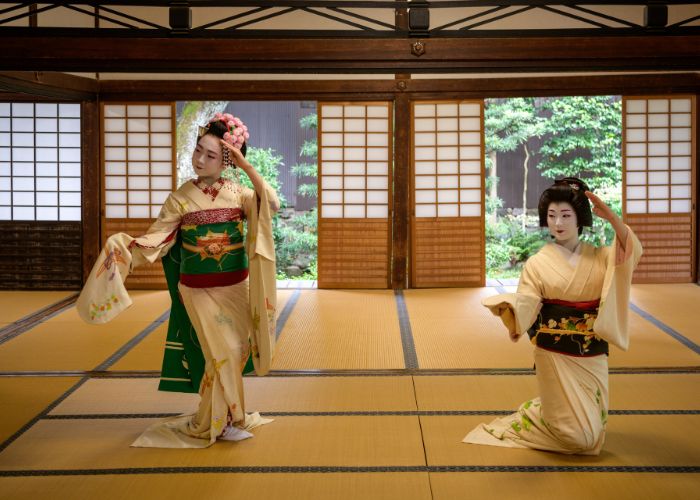 Maiko (舞子) is another term you might hear in connection with geisha. Literally translated as ‘dancing child’, it’s the most common term for an apprentice geisha. Training to be a geisha usually takes around five years to complete, and girls often begin their apprenticeships at age 15 or 16. During this time, the maiko live in a geisha house (known as an okiya), and learn all the requisite hospitality and performance skills to become fully-fledged geisha. 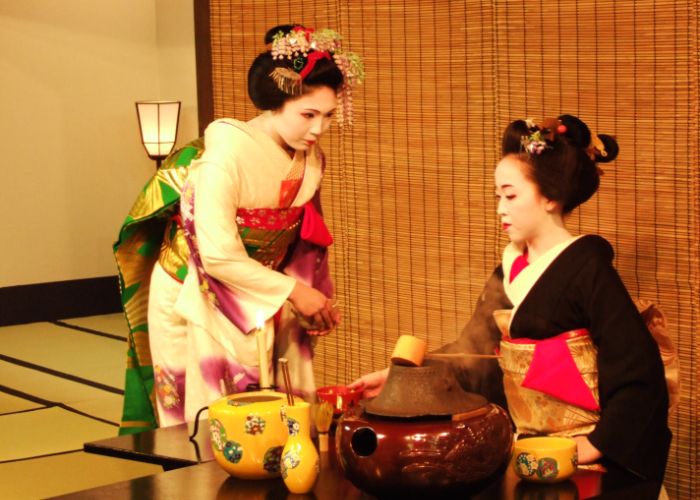 The History of Japanese Geisha

The roots of geisha culture date back hundreds of years, to saburuko serving girls in the 7th century and shirabyōshi dancers in the Heian period. Although today’s geisha are all female, some of the earliest were actually male performers known as taikomochi, who were a little like court jesters (there are a handful still performing today).

Some of the forerunners of modern-day geisha worked as assistants to courtesans, but their popularity soon saw the profession develop into an independent one. There were estimated to be as many as 80,000 geisha in Japan in the 1920s, though this number fell dramatically during and after the Second World War. Today, there are thought be fewer than 1,000 geisha working across the country. 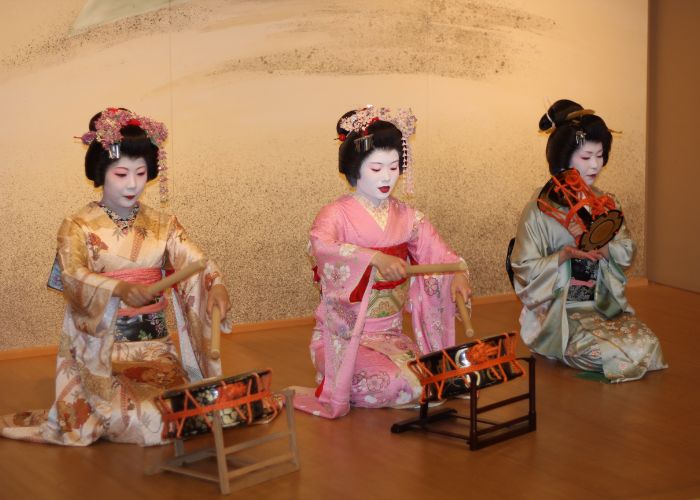 Geisha culture still persists in modern Japan, both as a form of entertainment and as a way to preserve the country’s traditional arts. The majority of geisha work in districts known as hanamachi (flower towns), and often live in the geisha house they’re affiliated with. These are typically run by former or more experienced geisha, referred to as the okā-san (mother).

Geisha perform in exclusive teahouses (ochaya) and luxurious restaurants (ryotei) within their hanamachi, where often only trusted customers and invited guests can enter due to the extravagant costs of geisha banquets. At these events, participants can enjoy a high-end dinner and drinks while chatting with elegant geisha and maiko, and watching them perform a seasonal dance accompanied by traditional music.

In recent years, the industry has also opened up to tourists in order to ensure its survival as local interest in traditional arts and culture declines. This modernization has even extended to the digital world, with online geisha performances offered so that people all around the globe can experience this unique aspect of Japanese culture. 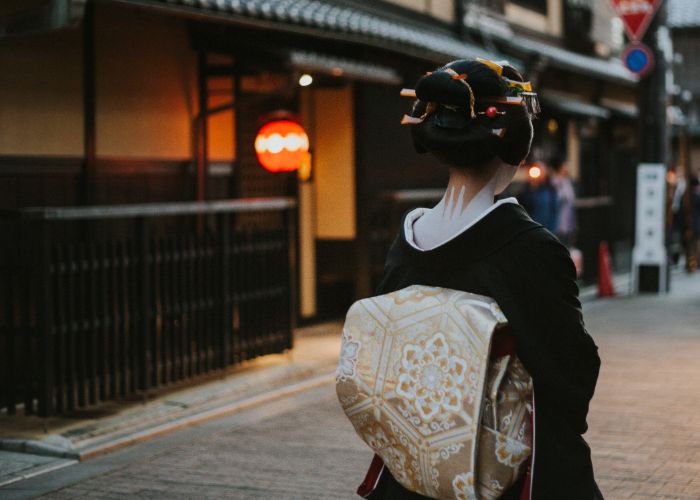 A geisha banquet will typically consist of a classic kaiseki ryori meal, where guests are served multiple small courses featuring top-quality, fresh seasonal ingredients. Each dish is beautifully presented, and often highlights a particular ingredient or method of cooking.

The meal is followed by a variety of traditional dance and music performances, after which the geisha will lead guests through some simple yet highly entertaining party games (many of which are drinking games). Depending on how many geisha and maiko are present, one or more may continue to play music in the background as the games are played. 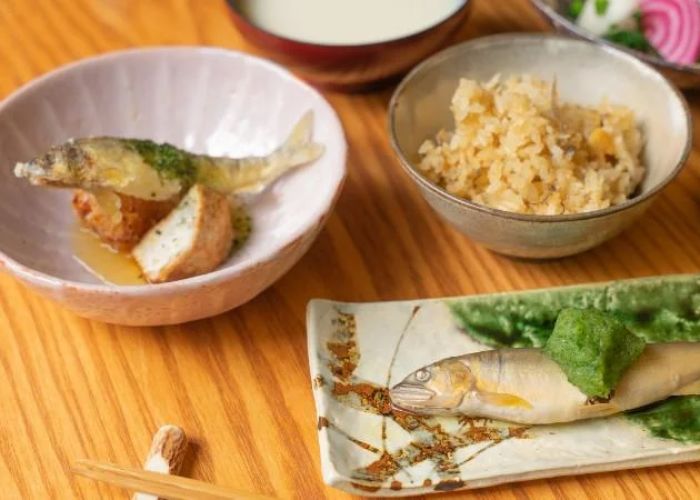 Where to see Geisha

Today there are geisha districts in several of Japan’s major cities, including Tokyo, Kanazawa, and Niigata. However, the ancient capital Kyoto remains the beating heart of geisha culture. Here you’ll find five atmospheric geiko districts lined with historic teahouses and geisha houses, and even services where you can dress up as a maiko or geiko yourself.

As well as traditional geiko banquets, visitors can enjoy geisha culture by attending one of the daily maiko dance performances at Gion Corner or the Miyako Odori that takes place throughout April.

If you’re planning a trip to Japan and would like the opportunity to dine with geisha and experience the very best of Japanese hospitality and cuisine, you can do so with byFood. From a private banquet in a 100-year-old teahouse in Kamakura to a night of sake tasting and games in Tokyo, it’s sure to be an evening you’ll never forget! 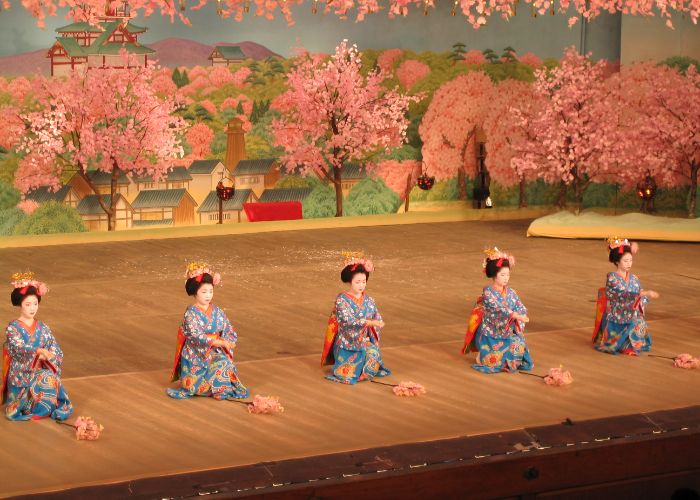 Geisha are an integral part of Japanese history and culture, embodying the ideal notion of omotenashi hospitality. Even today, they have a key role to play in the tourism industry and keeping Japan’s traditional arts alive. So if you’re heading to Japan, don’t miss the chance to experience geisha culture for yourself!

We strive to be as accurate as possible and keep up with the changing landscape of Japan’s food and travel industries. If you spot any inaccuracies, please send a report.
2
Click clap if you like this post
Ashley Owen
Ashley is a freelance travel writer from the UK who spent the last two years living in Japan, and is about to embark on her next adventure to New Zealand. She's always on the lookout for exciting new vegan treats wherever she goes!
SEE ALL POSTS
You may also be interested in
Kyoto

Where to See Cherry Blossoms in Kyoto

10 Best Izakaya in Kyoto to Eat, Drink, and Mingle At