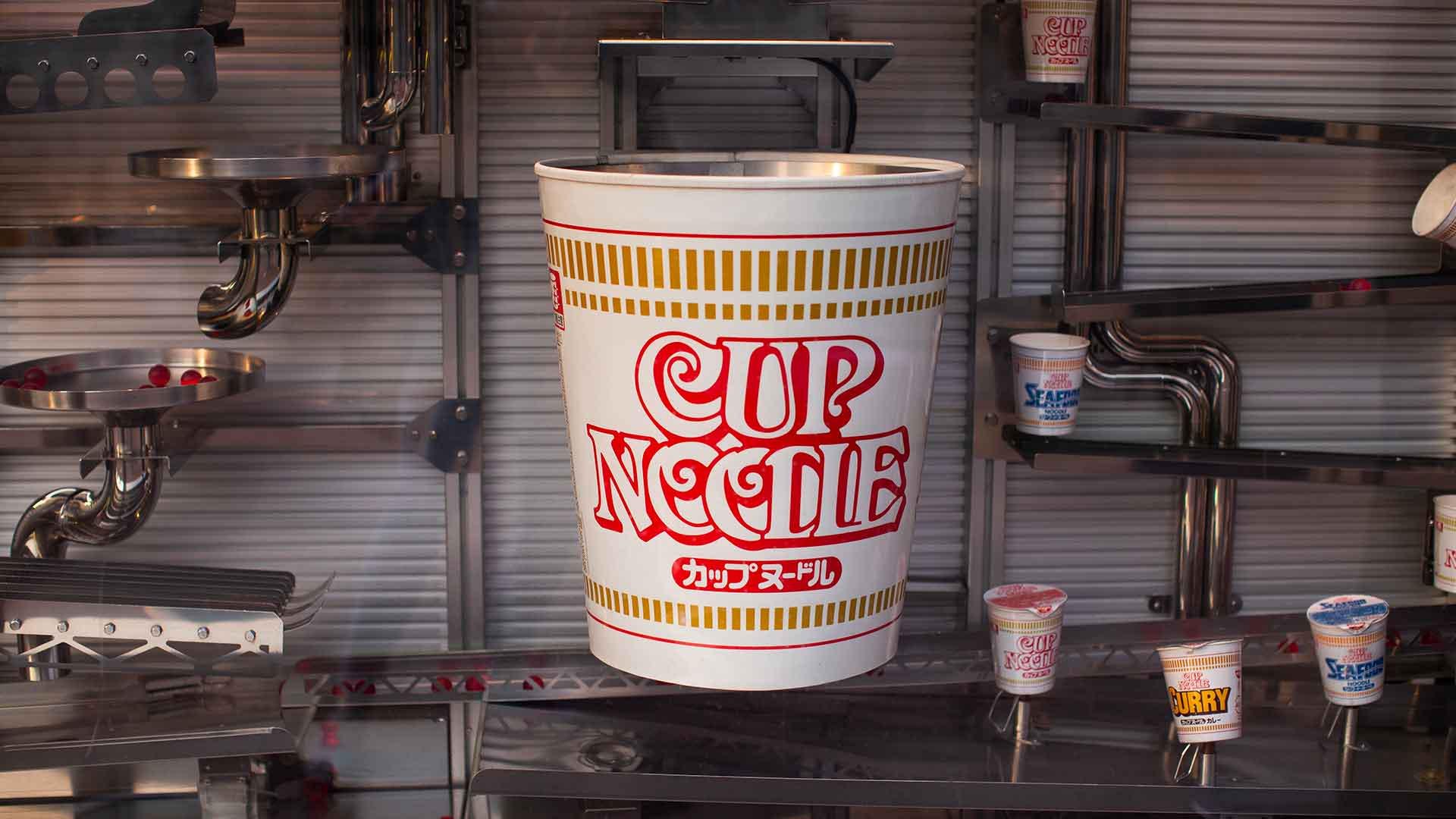 I think deep down I've always been more of a noodle girl than a rice fan. Of course, rice is such an important staple in Asia, but I just can't go past a good noodle dish. Particularly in Japan, there's so much for variety from ramen to udon to yakisoba. But, don't get me wrong, I'll still demolish a tasty gyudon rice bowl or a warming plate of Japanese curry rice, no problem. I mean that, Japanese glutinous rice is just so unbelievably addictive! It's just that my everlasting love of noodles might explain why I've been to the famous Cup Noodles Museum a total of 3 times in one year. That's 2 visits to the Cup Noodles Museum in Osaka, Ikeda, and once to the Yokohama Cup Noodles Museum. Yep, my heart goes out to noodles of all kinds, even including the instant type. 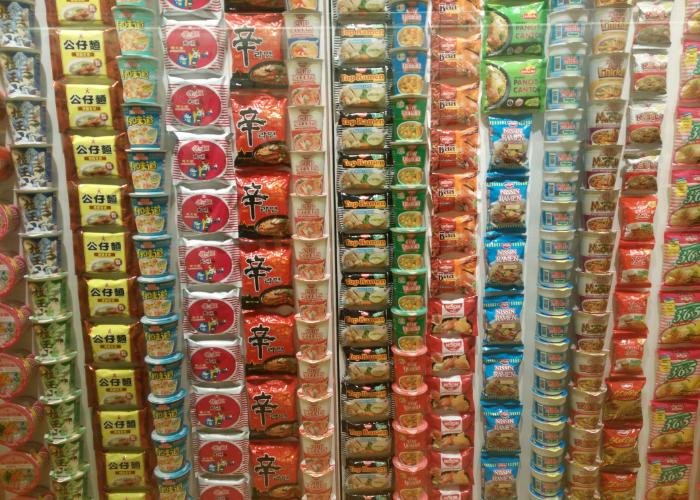 The Invention of Instant Ramen

The concept of the two Cup Noodles Museums is that they are institutions paying homage to the revolutionary work of Momofuku Ando. Taiwanese-Japanese inventor and later owner of major Japanese food company Nissin Food Products, Ando is the father of instant ramen.

Ando’s 3 great achievements throughout his life was firstly the invention of Chikin Ramen instant noodles in 1958. Ando invented instant ramen during the late 1950s in response Japan’s shortage of food during the postwar era. With a healthy dash of entrepreneurial spirit and an inventor’s undying curiosity, Ando spent months of trial and error until landing on the secret recipe of instant noodles: flash frying ramen. This process preserves the noodles, allowing them to be rehydrated with boiling water in just a few minutes. Fast forward till today, and now anyone can enjoy delicious noodles in no time! Ando later invented the museum’s namesake in 1971, the famous Cup Noodles. Finally in 2005, Ando invented Space Ramen for astronauts to enjoy.

Since the first ever instant ramen, Ando has brought instant food to another level by creating the instant ramen industry, changing the game forever. In its early days, instant ramen was an expensive luxury item, but it has since become one of the cheapest meals around. Thanks to Ando, this deliciously simple invention has made it possible for uni students to survive through their degrees around the world. Some people say that it’s one of Japan’s best inventions, and it certainly helped to put ramen on the map.

The Cup Noodles Museums are two noodle wonderlands for the young and the young at heart. The Yokohama Cup Noodles Museum is the bigger of the two. The standard free attractions include a replica of the house that Ando created the noodles in, as well as a fascinating “instant ramen packaging through the ages” display. There’s also a movie about Ando’s ramen journey at the Momofuku Theater, as well as other interactive facts and exhibitions about instant ramen throughout the museum. 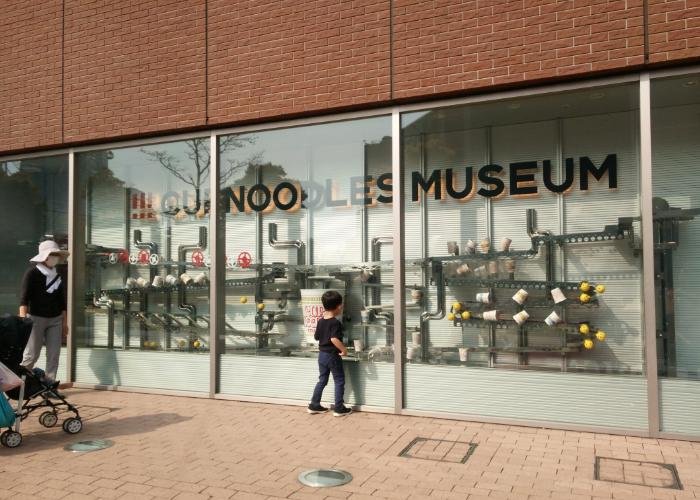 Among the paid attractions (you can buy tickets when you arrive) is the Cup Noodles Park for kids. In this attraction, children pretend to be noodles and go through a simulation of what it’s like to be made in the factory! The Noodles Bazaar on the top floor of the museum is a mini noodle market, supposedly inspired by the flavors that Ando discovered on his travels, while searching for the origins of ramen. Entry is 300 yen, but you get a mini bowl of ramen included. Bonus for the extra adventurous: we also tried some strangely accurately tasting curry flavored soft serve! 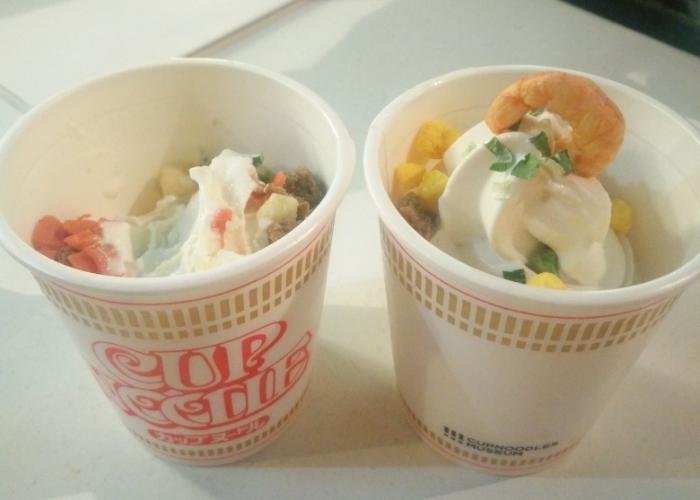 Ikeda is the official birthplace of instant ramen. If you want the purist experience, this is truly where the magic happened. Osaka Ikeda Cup Noodles Museum is a bit smaller than the Yokohama Cup Noodles Museum, but it’s still got all the main attractions like Ando’s house, a cool retro noodle display, and the movie recount of Ando’s life (except the Cup Noodles Drama Theater is actually in the shape of a Cup Noodle. Nice.)

If you book ahead, you can secure a spot in the popular Chicken Ramen Factory. This is where you can learn to make ramen from scratch, however be warned that it’s a 90-minute session designed for elementary and junior high school children. Note: the Yokohama Cup Noodles Museum also has one, as well as a killer gift shop for anyone who wants to load up on souvenirs emblazoned with Chicken Ramen’s yellow mascot, Hiyako-chan. But, the best part of visiting either of the museums is the My Cup Noodles Factory where you can make your own personalized Cup Noodles! 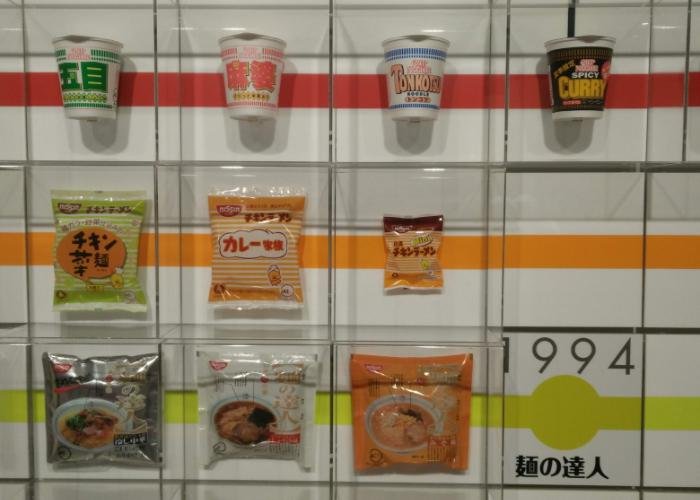 Make Your Own Cup Noodles

You can make your own pot of Cup Noodles at either of the Cup Noodles Museums. You get to customize the flavors and personalize the cup by drawing whatever you like on it. This main attraction is in a big room with tables for drawing, and then the production area at the head of the room. I remember feeling like such a big kid each time, but honestly, it’s great fun for all ages. 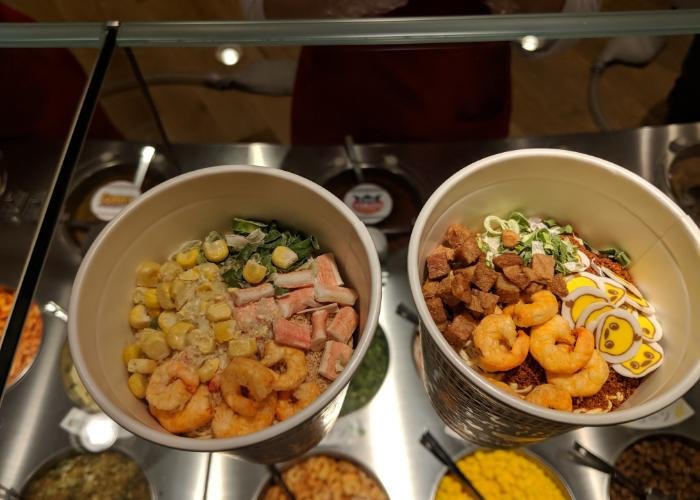 You’ve got to queue, as is expected in Japan, but the wait is worth it. Firstly, you need to buy your cup (or as many as you’re prepared to decorate) from a vending machine. At only 300 yen per cup, it’s an absolute steal to be able to make your own noodles! You do this while you line up for a drawing table. Your cup comes empty and with plenty of blank drawing space to create your very own Cup Noodles masterpiece.

When it’s your turn, a friendly guide will direct you to a free table with special colored markers for decorating your cup. Time to get creative and unleash your inner Picasso. They also have some “how to” instructions for those who would like to attempt drawing their own signature chicken ramen character, Hiyoko-chan. Take a look around you, and watch the parents getting into it just as much as the kids. At my table, my friends and I are in deep concentration, fervently drawing with a secretly competitive energy. Who will be the one to make the coolest cup?! 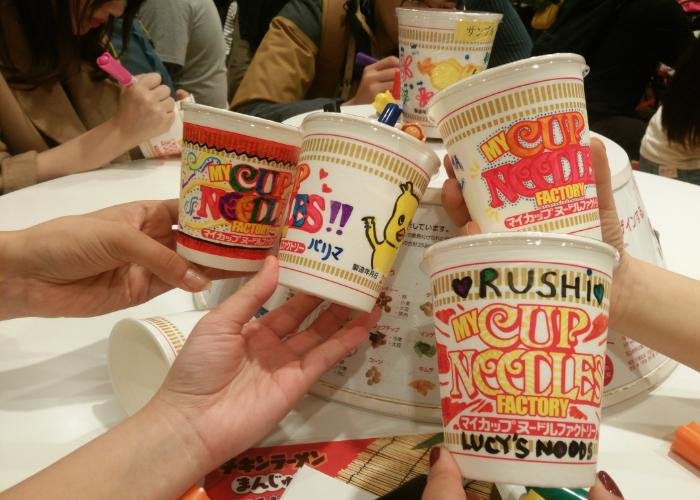 Once you’re done making your one-of-a-kind cup, line up to choose your flavors and have your noodles packaged up. Behind glass is the production line, and you go through each step of the process with your cup and a noodle-y staff member. 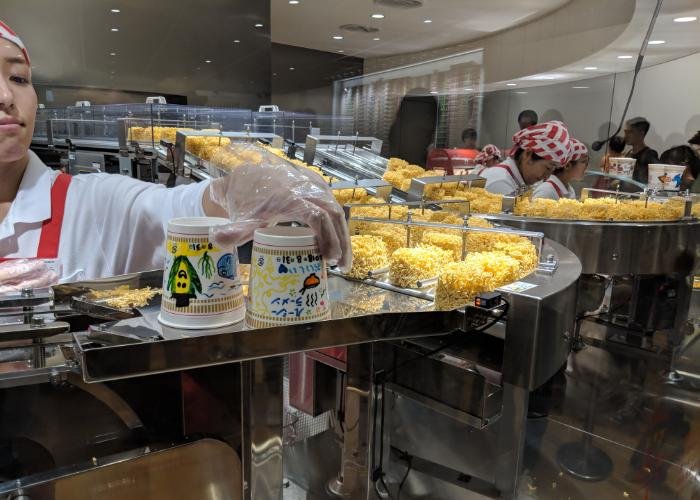 You can choose one of 4 flavors: original, seafood, curry, or chili tomato (I’ve tried all but the original one). Next, you can choose 4 out of the 12 topping ingredients for your noodles. Corn, green onion, and tiny shrimp are among the standard toppings, but make sure you get some of the fish sausage with little Hiyako-chan’s face on it! 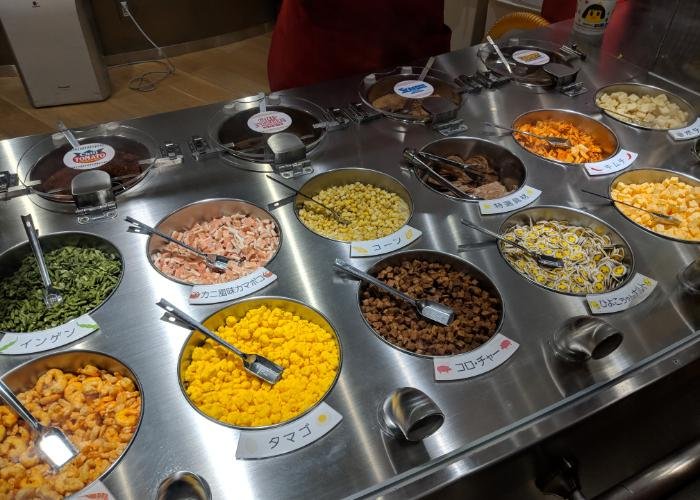 This mini production line is quite interactive. You get to help put the noodles in the cup, then put the seal over the top, turning handles and pulling knobs. Watch the plastic shrink wrap around the cup, and viola! Your noodles pop out and you can take them home. Even as someone in their twenties, it’s so exciting to watch your own noodles get made in front of you!

To protect your cup from the elements, take your final product to a packaging station off to the side. Place your cup inside the clear plastic packaging, then use the air pumps to inflate it, creating a balloon to protect the cup. Tie on one of the red strings to create a handle, and now you’ve got a custom cup of noodles that is convenient to transport (or, some might see it as a very chic accessory). Alternatively, you can eat your noodles immediately at the in-house tasting room. 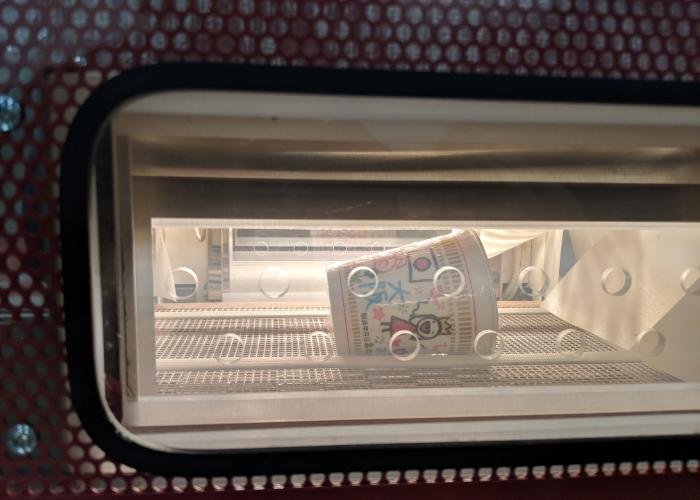 The two Cup Noodles Museums, whichever you go to, are great. Even if you don’t have kids, it makes for a really fun way to spend an afternoon (particularly good if it’s raining). It’s a very colorful and interactive attraction, and you can still learn a lot without paying for the extra activities. The museum encourages creative thinking, perseverance, and of course, the whole-hearted consumption of instant noodles a-plenty. I felt like a big kid every visit, and I’d definitely recommend it. Thanks Ando. 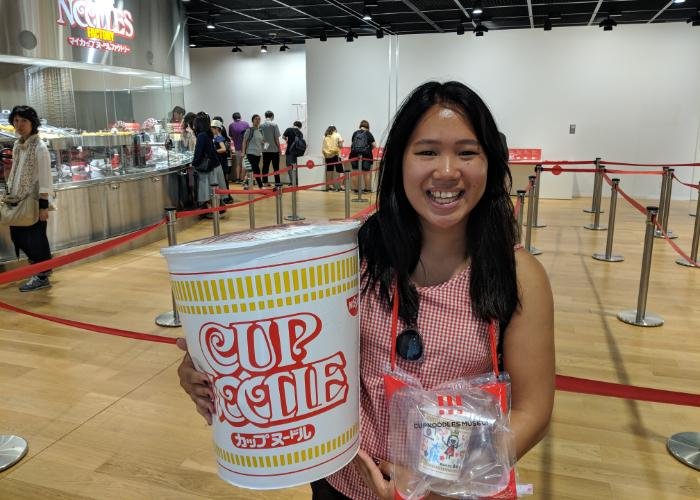 For more about the history of Cup Noodles, check Noodle Fever, episode 2 of our Tabesugi Podcast. Or, browse ramen experiences in Japan and have your own ramen adventure!