Stuck at home and wanting some family entertainment? Let’s have a takoyaki party—a tako-pa! Here, I go overboard in the octopus department with three simple Japanese octopus recipes. I’ll teach you how to cook octopus in three ways: tako karaage, takosu and takoyaki. “Tako” means octopus, and these are the most popular Japanese octopus dishes.

There are actually several kinds of octopus in Japan, and you may see a ginormous arm of the giant Pacific octopus from Hokkaido (Enteroctopus dofleini) or its more moderately-sized relative, also from Hokkaido, the chestnut octopus (O. conispadiceus) at your local fishmonger’s. But the octopus we will be dealing with here is the domestic madako (O. sinensis) and its nearly indistinguishable cousin the “common octopus” (O. vulgaris), mainly imported from the West African countries of Morocco, Mauritania and Senegal. The difference between the two is just the length of the arms and the arrangement of the suckers on the males’ “special arm.”

“What is special about the arm?” I hear you asking… It is used as a sex organ. But don’t let it weird you out—it doesn’t seem to affect the taste.

Well, let’s dig right into it—how to cook octopus. I cooked all three of these recipes myself today, so they’re fresh in my mind. 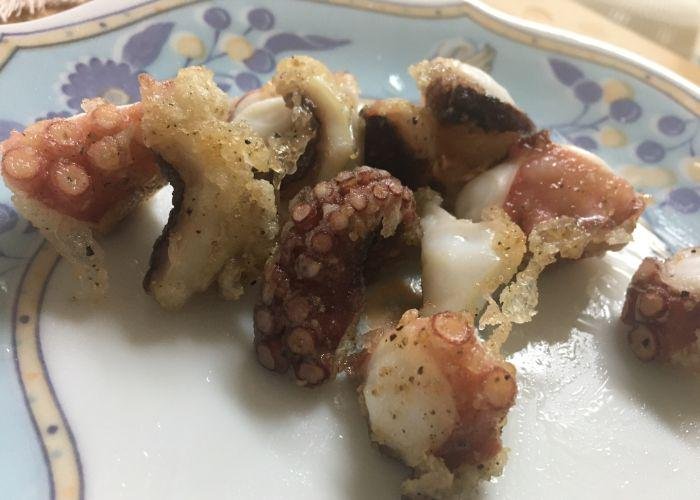 The first Japanese tako recipe I tried was a tako karaage recipe that was featured on the NHK website, but I changed it a little. This is supposed to serve two.

Cut two boiled octopus tentacles with diagonal cuts to make bite-sized chunks. The idea is to make the appearance slightly random, which is aesthetically pleasing.

Add salt and pepper. I used pink rock salt from the Himalayas, and if you want to be an elite gourmet I suggest you do the same. 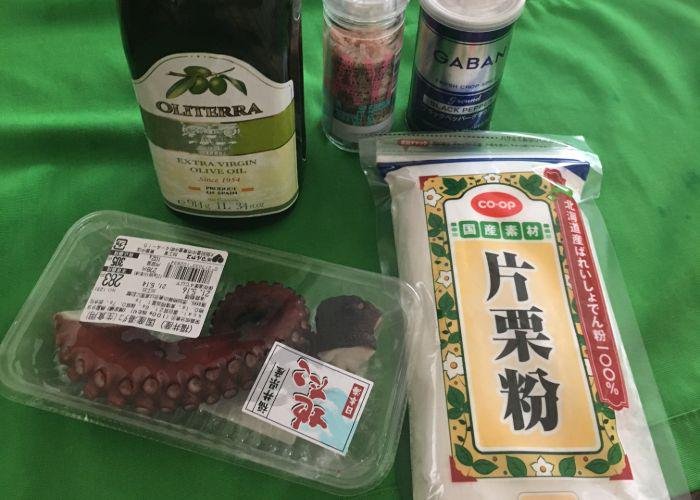 Coat the octopus with potato starch (katakuriko in Japanese). This was the hard part. It doesn’t really stick to the octopus, so I didn’t get a very good covering. An improvement is to dip the octopus in some beaten egg white and then transfer it to a bag of the starch and shake it. This will make the katakuriko stick better. 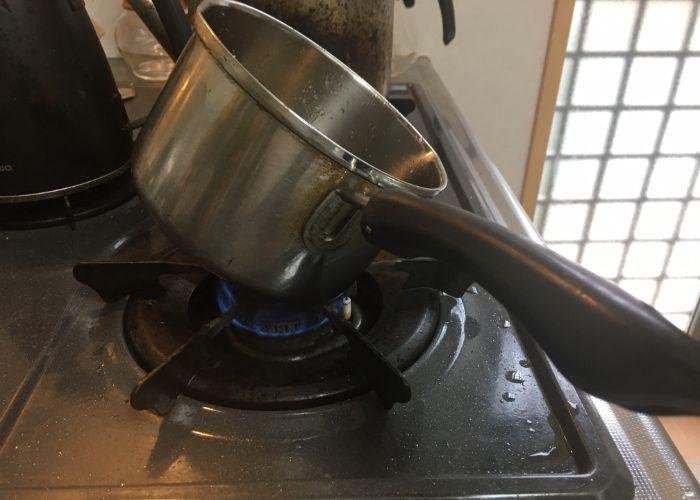 Move the pieces into a pot of hot vegetable oil. I used extra virgin olive oil, because that’s what I happened to have. However, not wanting to waste a lot of expensive oil, I tipped the pot onto a corner to get some depth without adding more oil. Garnish with sudachi citrus. I used bottled lemon juice, because—what else—that’s what I happened to have.

The following Japanese octopus recipe for takosu can be used equally well with firefly squid, which is usually in season from May. But as today is all about how to cook octopus, I used madako.

First make the pickling liquid in a large mixing bowl. I used two tablespoons of sushi vinegar (vinegar is “su” in Japanese—thus the name of the dish), one tablespoon of mirin (sweet rice wine), a squirt of soy sauce, and a teaspoon of brown sugar. The sugar can be white—I just like a little brown sugar now and then. Mix it up. 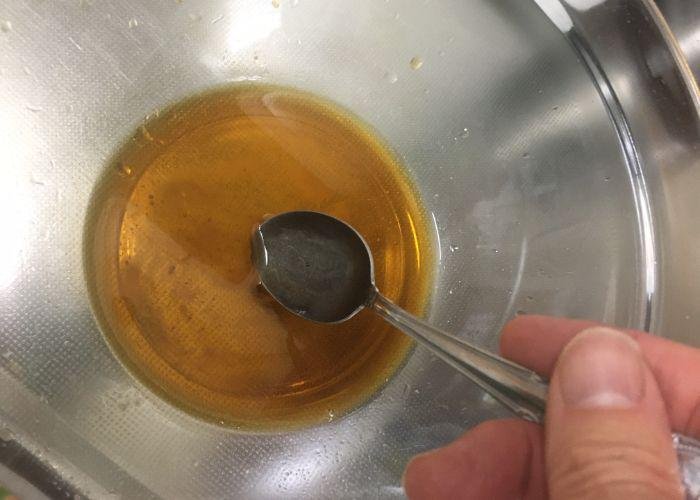 Now for the cucumber, I used two long skinny Japanese kyuri. I cut off the ends and peeled a few strips lengthwise, leaving some of the green skin for color. Then slice them as thinly as possible at an angle to make the pieces a little larger. Dump into the bowl of liquid. 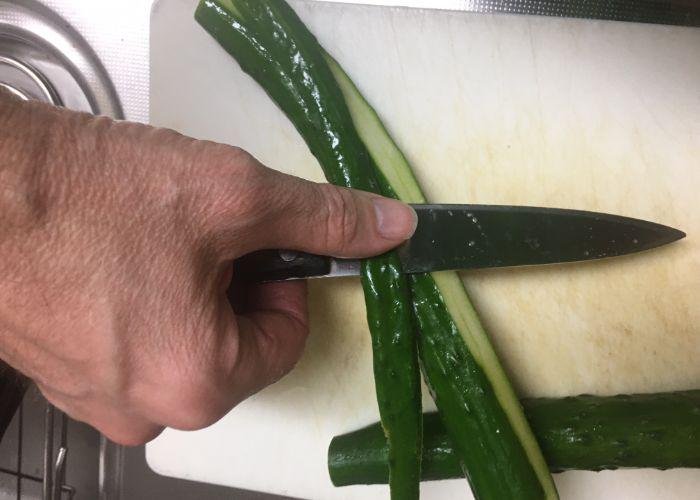 For the octopus, slice it with diagonal cuts in alternating directions, as for the tako karaage, but a little smaller this time. Dump this in as well. 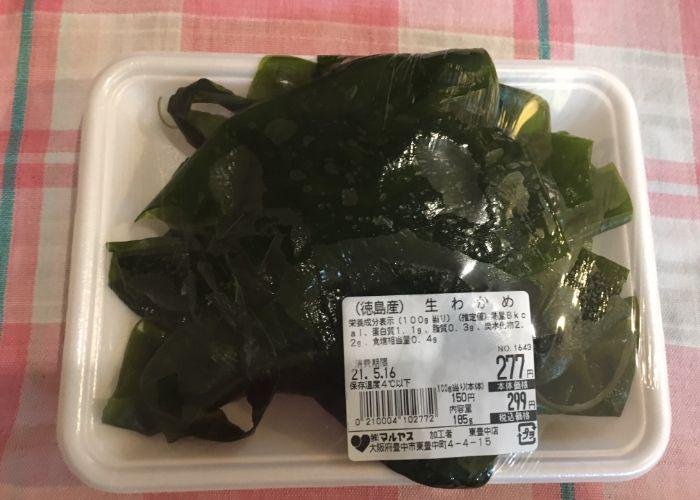 For wakame seaweed, if you can find it fresh, as I did, that would be good. You’ll have to cut it up. If not you can get the dried stuff and rehydrate it in a bowl of water. Add as much as suits you. 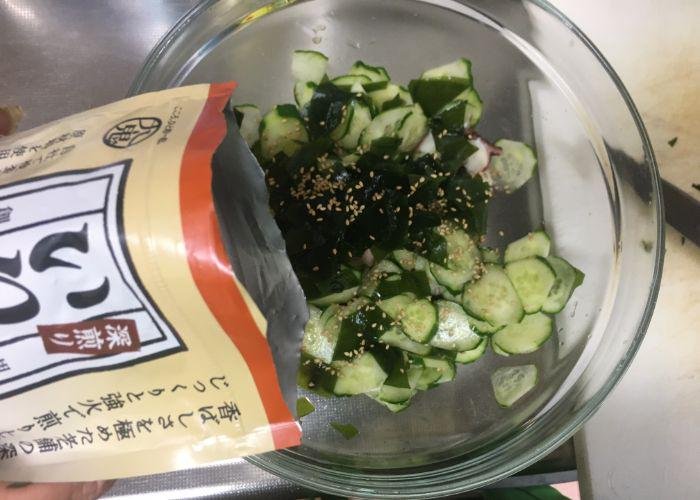 Sprinkle some sesame seeds on top. Then get in there with your hands and mix it up, separating the cucumbers—which tend to stick together—and getting everything into the liquid. 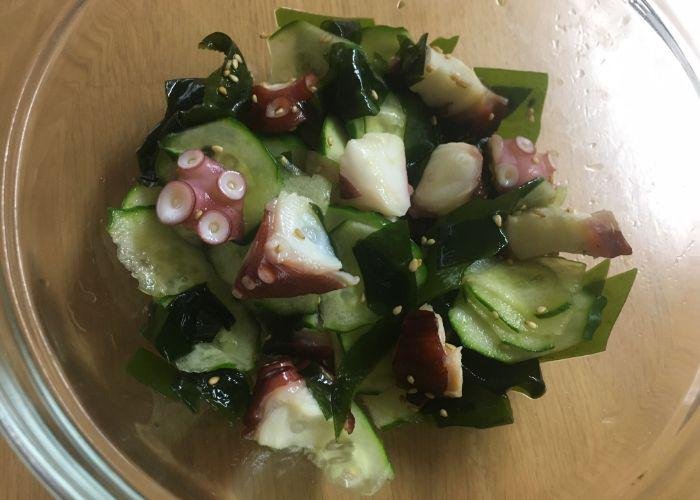 Now, cover the bowl with some plastic wrap and set it in your refrigerator for three hours to marinate. This dish usually tastes better on the second day. 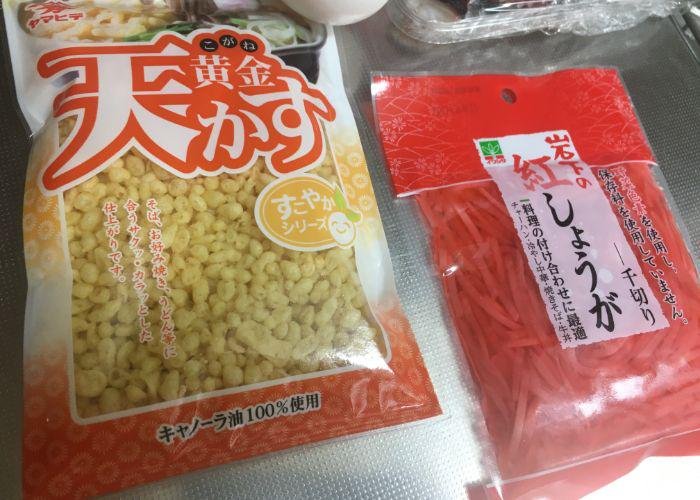 I’m going to give you a pretty standard takoyaki octopus ball recipe, but you can put other things into it too. After I ran out of octopus for takoyaki, I made “sausage, broccoli and shredded cheese-yaki.”

For the ingredients, you have some options. You can combine 100 grams (1 Japanese cup) of all-purpose flour, an egg, 300ml (1 ½ Japanese cups) water, a half teaspoon of baking powder and about the same of powdered konbu (kelp) and katsuobushi (fermented bonito tuna flakes) dashi stock. Or if you are in Japan, you can buy pre-mixed takoyaki flour and just add the egg—which is what I did. 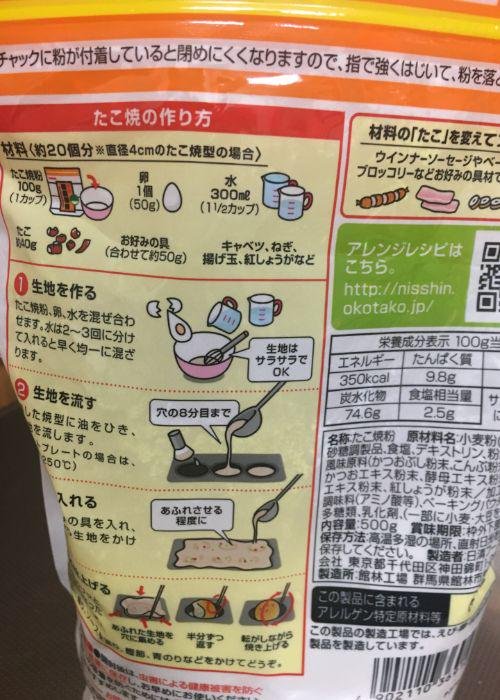 It is convenient to move the batter into a container with a spout so that you can pour it easily. I used a Pyrex measuring cup.

To go inside the tako-balls, you will want one tentacle cut up even smaller than for the other two Japanese octopus recipes, sliced green onions, tempura bits (tenkasu) and beni-shoga (the pink one shaped like matchsticks) cut up small. Have all of these things ready to drop in before you start dropping batter.

You will also want the traditional toppings: first sauce—which is about the same for tonkatsu (pork cutlet), okonomiyaki and takoyaki. The one for yakisoba is a little stronger and less sweet. Then mayonnaise, katsuobushi (fermented bonito tuna flakes) and aosa/aonori (dried green seaweed).

I should admit here that when I planned out my recipes I did not own a takoyaki pan, which has many hemispheric depressions to hold the individual balls. And being the cheapskate that I am, I planned to improvise with a waffle maker. (This was after my original idea of improvising with a mini-muffin pan.) However, my Japanese wife found a simple takoyaki cooker at the Konan home improvement store for the low, low price of 980 yen—and she bought it for me. So, I made them the normal way. 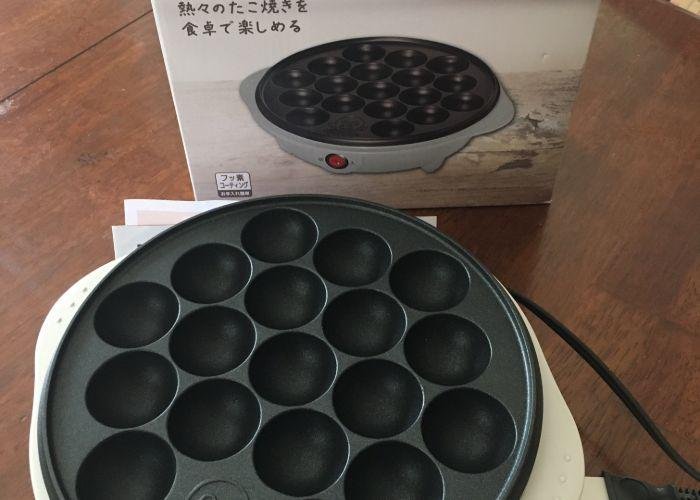 To cook the balls, first turn on the heat and grease the holes with oil. Then pour batter until it fills the holes. There are two strategies for making nicely formed balls. The original way is to overflow the holes, then drop in all of the fillings, then use a skewer to cut up the overflow and shepherd it into each hole, then flip it. That looked hard. 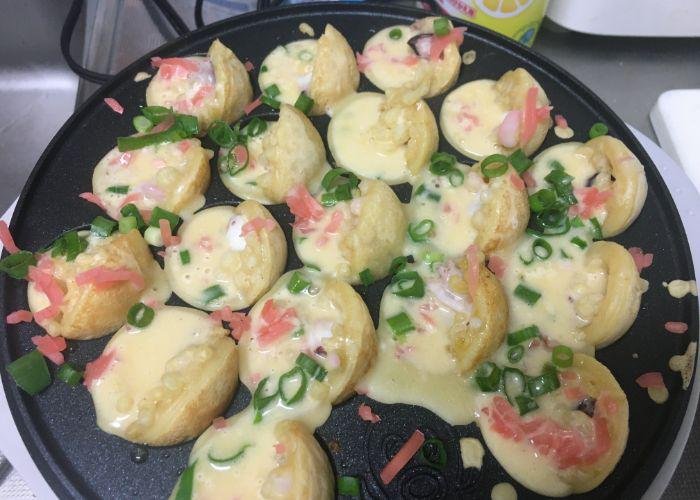 I cheated and filled the holes only to the top, then dropped the octopus and tenkasu. Then I used two skewers to turn the half-balls on their sides and filled the green onion and beni-shoga into the hole. After that, I filled the remaining space with batter and then flipped it over completely. The first method makes a rounder ball, the second is less messy. 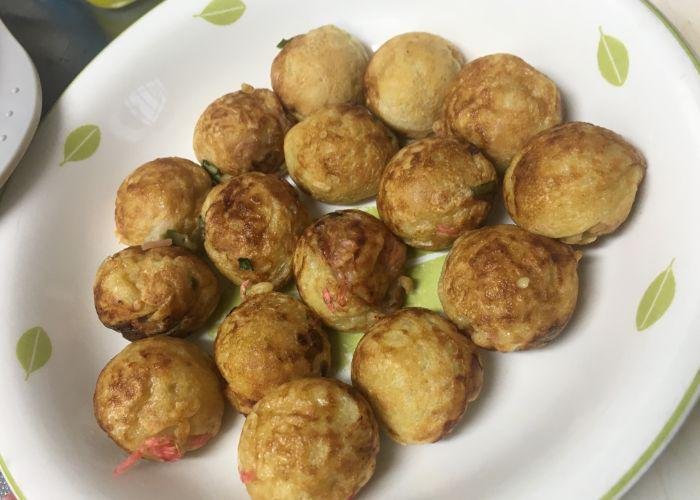 I recommend to coat the tops with oil again and move the ball around to cook any rare spots. When it looks golden brown, you can remove it and top it with the sauce, mayo, katsuobushi and aosa. Finally, eat.

I am so happy the Osakans created such a nice dish for the rest of the world to enjoy. And that the Chinese are making takoyaki griddles that sell for 980 yen. Thank you, Osaka! Thank you, China!

Want to sharpen your cooking chops? Check out these online food experiences and cooking classes!

We strive to be as accurate as possible and keep up with the changing landscape of Japan’s food and travel industries. If you spot any inaccuracies, please send a report.
8
Click clap if you like this post
Chris Loew
Chris Loew reports from Osaka, where he has lived for 20 years. He writes about food, Japanese companies, and marine policy issues. He previously worked for two years in the purchasing department of a Japanese meat importer, and for five years as export director for two Seattle food companies, selling to customers in the Far East. He has co-authored two college-level language texts. When not writing, he proofreads Japanese-to-English translations.
SEE ALL POSTS
You may also be interested in
Osaka