Takoyaki, okonomiyaki, yakiniku - these are just some of the dishes that come to mind when you mention Osaka, Japan’s famous food capital. However, if we are talking about Osaka food, one cannot miss out on trying the luxurious pufferfish delicacy, also known as fugu. Known to be an extremely poisonous fish, it is a food that has existed since the ancient times for the Japanese, and the fugu restaurants in Osaka are known to be the best to serve it in the country! No worries, though, as chefs that do serve the poisonous fugu undergo training for at three years before qualifying for a license. 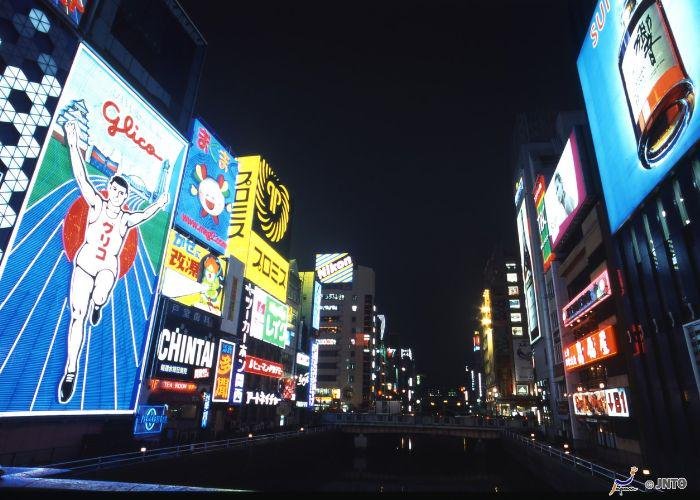 Fugu can be enjoyed in several ways with three styles being the most common: tessa, tecchiri, and karaage. Tessa is what they call fugu prepared sashimi-style; thinly sliced and arranged in a floral pattern, it is said that fugu sashimi is best eaten with several pieces, instead of eating individually, and dipping them in ponzu, soy sauce, or momiji-oroshi (grated daikon radish with chili pepper). Meanwhile, tecchiri is what people from the Kansai region call a fugu hotpot. A perfect winter dish, the meat and bones of the fugu is mixed with vegetables and mushrooms in a pot filled with kombu-based broth. For those who like to drink alcohol, they say that deep-fried fugu, known as karaage, is the perfect food to pair it with. 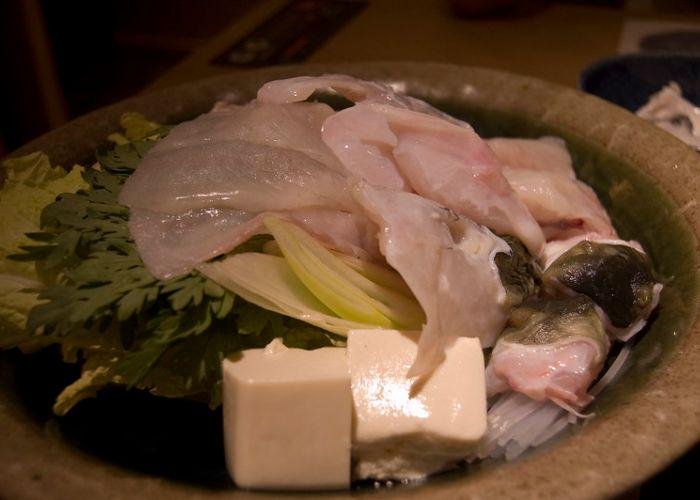 The fugu’s meat is not the only thing that can be eaten. Its milt is also enjoyed by people, especially grilled which brings out its fragrant smell. The fugu’s skin which has a jelly-like consistency and is very rich in collagen can be boiled lightly, making it a perfect snack to eat with alcohol; or be added to cold soba – creating fugu nikogori. Lastly (and surprisingly), fugu can also be served as a hirezake by using its fins, sun-dried and cooked over an open flame, and adding them into hot sake.

Here are a few of Osaka's top fugu restaurants! 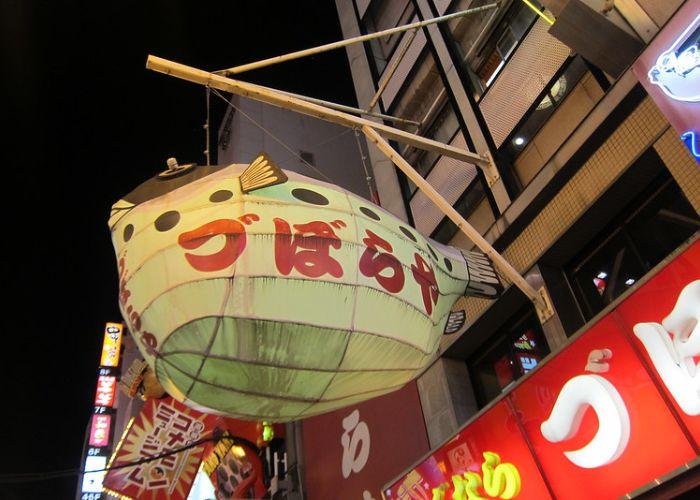 Located in the most famous area of fugu restaurants in Osaka, Zuboraya is a household name when it comes to fugu dishes. Established in 1920, the restaurant with its iconic inflated pufferfish lantern hanging out its storefront, is known to specialize in the domestic tiger pufferfish to create a variety of fugu dishes including tessa, tecchiri, and tempura. Zuboraya also has another branch (with an inflated pufferfish lantern on its storefront as well) in the busy street of Dotonbori.

If you are in search of the best fugu in Osaka, then Takoyasu might be the fugu restaurant you’re looking for. With 2 Michelin stars under its belt, it is considered to be one of the best fugu restaurants in Osaka, serving only rare wild fugu that is only available from October to April. Housed in an old traditional house in a quiet residential area, Takoyasu’s friendly staff are sure to make you feel at home while the owner-chef, the founder’s grandson, prepares its specialty dishes. The fugu used for sashimi is left to sit for several days to bring out its natural flavor, while the fugu for the hotpot is grilled to emphasize its flavor, and combined with vegetables. 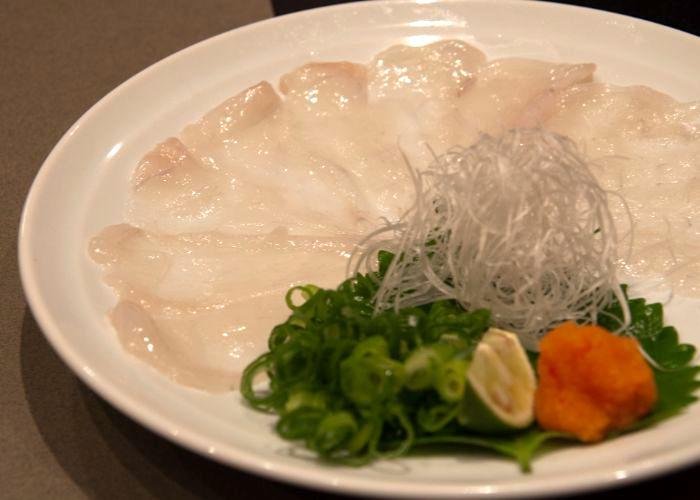 Distinct from the rest of these fugu restaurants in Osaka, Guenpin Fugu is considered to be the #1 pufferfish restaurant chain in Japan. With 88 branches all over Japan, as well as in China and Singapore, as of 2018, Guenpin still managed to maintain the quality of its fugu dishes with internationally patented techniques and more than 130 licensed chefs to prepare fugu safely. Guests can enjoy a taste of traditional Japan with Guenpin’s wooden panels, intimate lighting, and traditional table settings while choosing from the restaurant’s different meal sets: Guen (five-course), Daigo (six-course), and Tenraku (eight-course). Furthermore, while fugu dishes are normally seasonal, Guenpin is able to serve their fugu dishes all year round.

Fugu in Japan can be quite expensive, with a full-course meal costing from 10,000 to 30,000 yen. Fortunately, fugu in Osaka is relatively cheaper than in other areas of Japan, with the city being quite close in fugu-producing areas. Fuguyoshi Ikeda is one such affordable fugu restaurant. Just located outside the city center, Fuguyoshi Ikeda is a small, Japanese-style restaurant serving fugu dishes at reasonable prices, making them a local favorite. Their fugu lunch courses can cost from 3,000 to 5,000 yen, while dinner courses such as the hotpot or karaage costs from 6,000 to 7,000 yen. 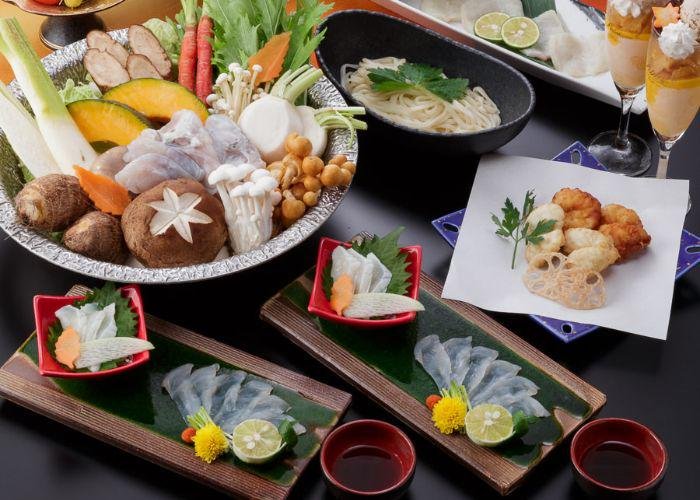 Feast on fugu in Osaka like a king when you visit Yumefuku, just a short walk from the JR Osaka Station. The traditional restaurant with its modern interiors and intimate private rooms is sure to make guests comfortable whilst they enjoy the fugu delicacy. While known for their reasonable prices for Japanese fugu dishes, Yumefuku is also known for their Kukai course: a full-course meal that utilizes a whole fugu to create the dishes. Anyone who chooses the Kukai course is sure to enjoy fugu at its fullest with the variety of dishes such as fugu sashimi, fugu sushi, fugu karaage, grilled fugu, fugu hotpot, and fugu porridge.

The historical castle town of Kishiwada is home to a 2 Michelin star fugu restaurant, Kitahachi. Run by the world-famous fugu expert and chairman of the Japanese Fugu Society, Chef Kiichi Kitahama, this fugu restaurant in Osaka offers unique dishes that can only be eaten there. Dedicated to creating delicious fugu cuisine, Chef Kiichi has been studying fugu for over 60 years. With his knowledge, combined with the 20 or so techniques he learned from his father, the founder of Kitahachi, he has managed to create unique fugu dishes such as the fugu skin prepared in five layers, and a stunning nikogori. Adjacent to the restaurant is a fugu museum that guests can visit as well.

Eating in Osaka is such an adventure that the locals have a saying of "eating yourself to bankruptcy in Osaka" (Osaka no kuidaore in Japanese)! When going on a trip to Osaka, one cannot miss out on trying the local Osaka cuisine which includes the luxurious fugu delicacy. While fugu has long been a part of Japan’s history, fugu restaurants in Osaka are still continuously trying to evolve and create new dishes that could potentially bring out the best in fugu.

Curious about the other delicacies of Osaka? Check out our guide, What to Eat in Osaka! Or browse food experiences in Osaka!

We strive to be as accurate as possible and keep up with the changing landscape of Japan’s food and travel industries. If you spot any inaccuracies, please send a report.
14
Click clap if you like this post
Clarence Rowan
Always documenting her travels, Clarence is a freelance writer and hobbyist photographer who suffers from wanderlust. She has traveled several countries all over the world but always finds herself going back to Japan at least once a year. A lover of culture, people, and of course, good food, discovering local gems and the area’s best eats is what she defines as a trip well done!
SEE ALL POSTS
You may also be interested in
Osaka