Known as one of Japan’s largest Chinatowns, Nankinmachi sits in the heart of Kobe in Hyogo Prefecture and attracts hundreds of tourists every day. Although the Kobe Chinatown street foods are especially popular with visiting tourists and locals, Nankinmachi is also known for its vibrant and energetic spirit all year round, as hawkers and visitors jostle about, adding to the seemingly tireless hustle and bustle of the area.

During the months of January and February, Nankinmachi is also especially busy, as the Chinese begin preparations to welcome the Lunar New Year. Already an incredibly lively place to begin with, Nankinmachi is especially festive during this period, with dragon and lion dances, as well as parades being held all over Kobe Chinatown. It is truly a festive sight to behold as you watch the place literally come alive. 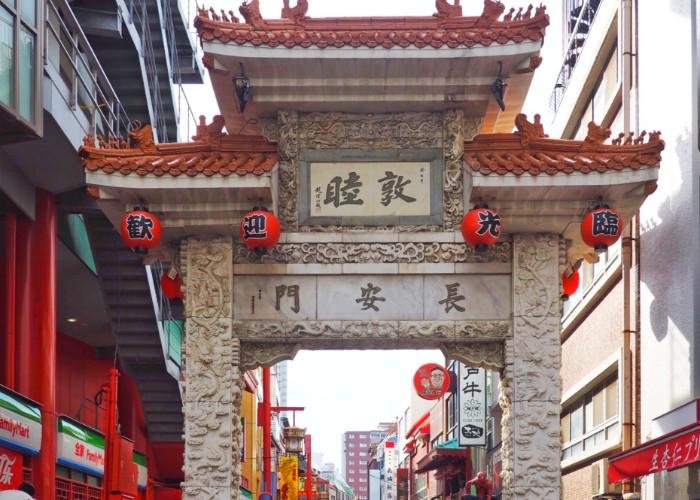 During the late 1800s, Kobe was a blooming industrial port, which saw a rise in the number of Chinese immigrants in the west of Kobe. Although Nankinmachi originated in 1868, it was partially destroyed by allied bombings and later on, was severely damaged by the Great Hanshin Earthquake in 1995. However, Nankinmachi was reconstructed and what we see today is a cultural melting hotpot of Japanese and Chinese fusion that is now a must-visit tourist attraction for visitors of Kansai.

Home to many stores selling a variety of Asian ingredients and knick-knacks you can purchase as souvenirs, Kobe Chinatown is perhaps most well-known for their street food. Although a walk down the lane might be an overwhelming affair for your olfactory senses, fret not, for this Kobe Chinatown Street Food Guide will help you discern the dishes most worthy of your calories and those which are not. Make sure you come hungry and ready to queue!

Here are some of the most delicious must-try street foods in Kobe Chinatown! 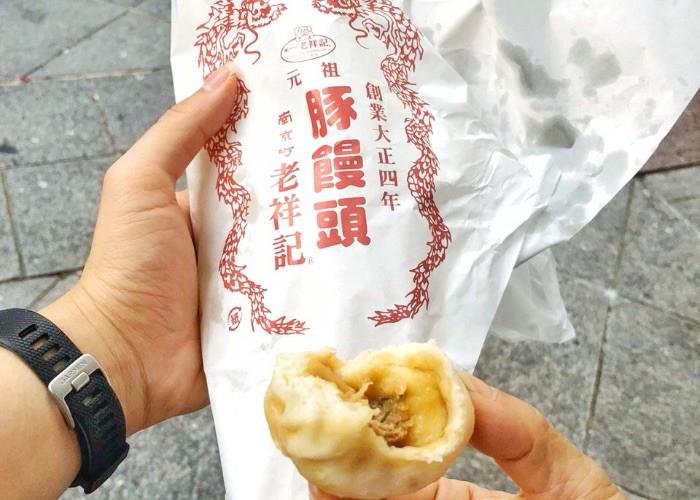 While steamed buns are a common sight across Japan, butaman, which literally translates to “pork bun,” is a common Kobe Chinatown street food and is sold at most stalls lining the streets of Nankinmachi. While you might be tempted to simply purchase the first butaman you see, we recommend that you hold on to your rumbling bellies for Roushouki.

Touted to be the best butaman in Nankinmachi, it is little wonder that the queue for Roushouki’s butaman snakes through the better half of the south of Nankinmachi. What sets Roushouki’s butaman apart from the rest is not only the juicy pork filling, but also its near-perfect ratio of bun to pork filling. A single bite of the butaman is enough to ensure that you get a mouthful of the dense yet pillowy bun complemented by the savoury minced pork filling. If you’re patient enough to wait to get your hands on a butaman form Roushouki, the queue is hard to miss - walk right down to the open square in the middle of Nankinmachi, and you will notice a snaking line that joins up to Roushouki, a small stall which sits across the plaza square. Be warned though, a 60 to 90 minutes wait is not uncommon. 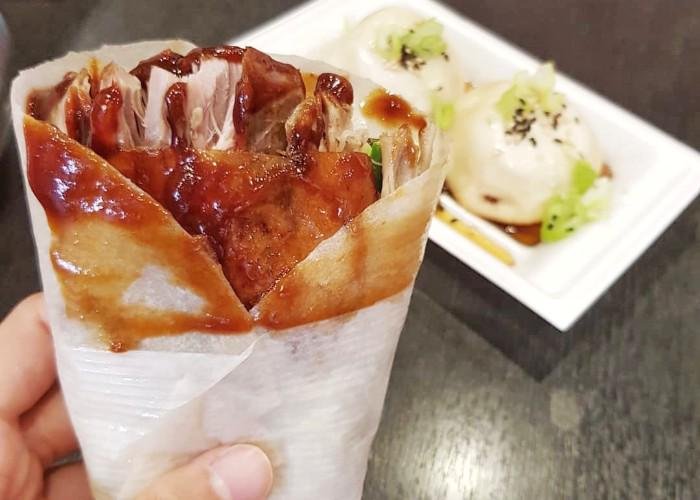 Peking duck wraps are sold aplenty across Chinatowns globally, and Nankinmachi is no different in its offering. Like the butaman, the peking duck wrap is offered at just about every stall across Nankinmachi. While the dish certainly looks enticing enough, it is essentially made up of slices of roasted duck and slivers of cabbage drizzled in a thick sweet sauce, swaddled in a single wrap called a pancake. However, with an overly thick and doughy pancake loosely holding limp slices of duck and greens together, the Peking duck wrap was sadly unimpressive. Considering that there are more delectable street food lining the streets of Nankinmachi, we suggest you save your stomachs and feast on other street foods that Kobe Chinatown offers. 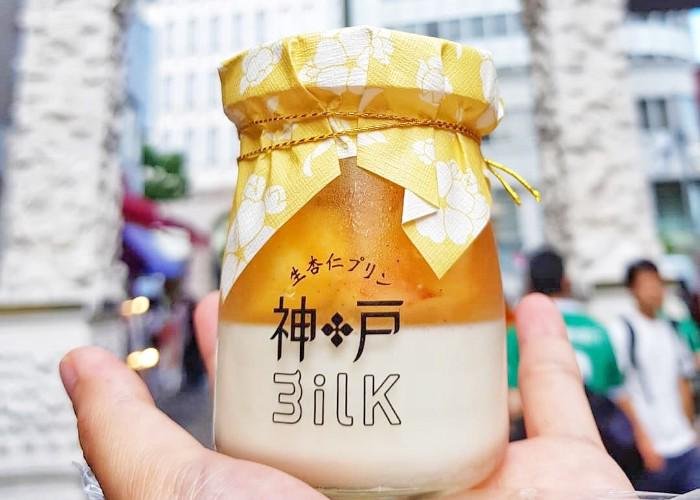 Once you step through Choanmon Gate, it is impossible to miss the long queue on the right, and a curious following of the trail will lead you to the storefront of Kobe Milk. Kobe Milk Pudding is one of Nankinmachi’s most popular desserts and one of the most Instagrammable ones too. The milk pudding comes encased in a little glass jar, lined with a layer of firm and creamy gelatinous custard, topped off with a caramel blend of fruits or other flavor you have selected. Although the original flavor offered is lined with a thin coating of caramel at the bottom before being filled with its signature layer of custard, Kobe Milk also offers several flavors of milk puddings, and as an optional indulgence, you can top it off with a soft serve too. Even if you are lactose-intolerant, this is truly a #worthit confection you have to get, both for your tummy and Instagram page’s sakes. 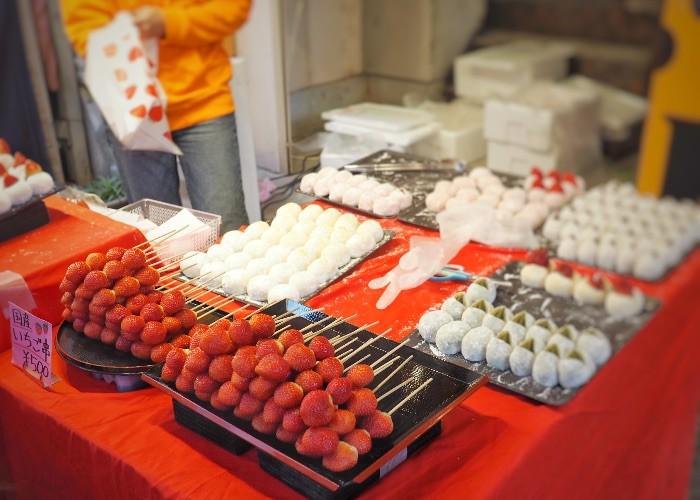 As someone who has lived most of her life in the tropics, Japanese strawberries are prized as an exclusive sought-after fruit. In addition to being larger and sweeter than regular strawberries, Japanese strawberries are firm to the bite, yet soft and juicy on the inside. However, some find these strawberries border on cloyingly sweet. If you do find it to be so, these fruit stalls often sell ichigo daifuku too, a soft mochi dessert that encases a whole strawberry in the middle. These are less sweet and a favorite amongst both the young and old. 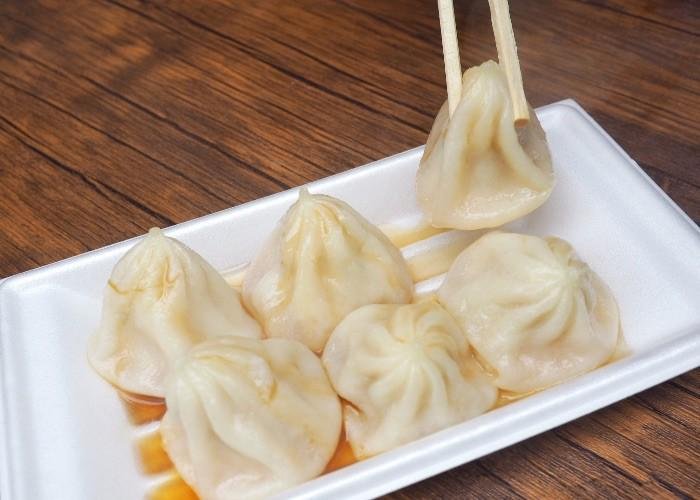 Yet another staple synonymous with the topic of Kobe Chinatown street foods, steamed soup dumplings, or xiao long baos (shoronpo in Japanese), are essentially steamed dumplings, usually filled with meat fillings and hot soup broth. The bottom of these dumplings are usually gummier than its upper half, which is delicate and thin, allowing you to pierce through the top to get to the broth, without spilling the soup.

There is an art to eating these steamed soup dumplings, and this topic has been a point of contention for many foodies. Although some recommend waiting about 3-4 minutes before popping the dumpling into your mouth whole, to get an explosive mouthful of flavors, the most common way of eating these little dumplings is to first pierce a small hole at the top with your chopsticks, and slowly slurp the soup out, before devouring the rest of the dumpling whole, thus preventing you from scalding yourself. Most stalls in Nankinmachi sell these steamed soup dumplings in trays of four or six, alongside other typical Chinese cuisine such as fried rice and other variants of steamed dumplings. 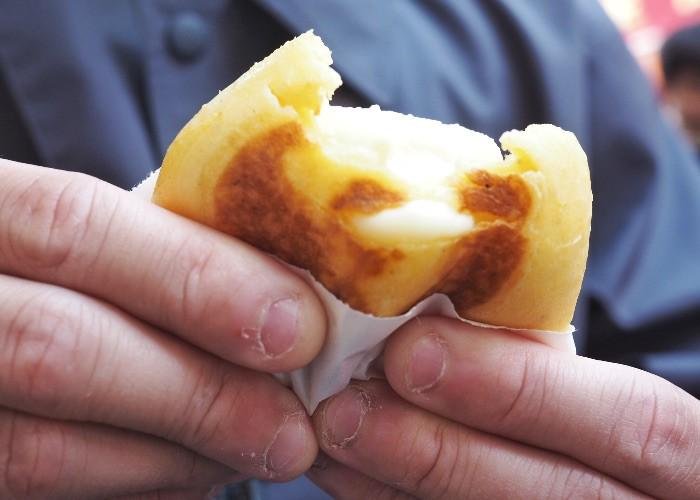 Having been featured in countless magazines and television shows, Kobe Croquette is no stranger to fame and long lines. Its most popular item is its cheese bun, with many people ordering half a dozen at a go. Nestled inside the chewy mochi bun is a ball of soft and gooey cheese. What we particularly like about the cheese bun was how light the cheese was. Instead of a strong salty flavor that one typically expects of a cheese bun, the cheese was mild and clean, which complemented the yeasty aroma of the mochi bun wonderfully. Having straddled the fine line between being overly cheesy whilst ensuring that their cheese is just buttery enough, the cheeseman is sure to please both cheese and non-cheese lovers.

7. Ebi to Hotate no Katsu, Prawn and Scallop Croquette from Kobe Croquette 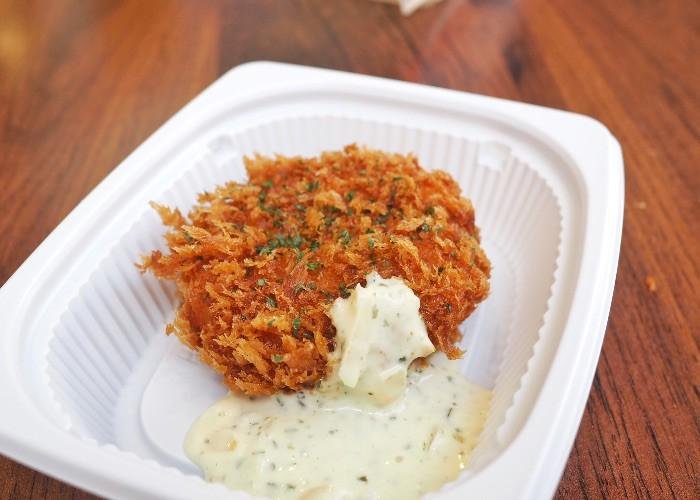 While its cheese bun is what most people patronize Kobe Croquette for, they are also known for their namesake - their croquettes. Their prawn and scallop croquette and their tori cheese chicken cutlet have been consistently ranked as their bestselling croquettes. Upon ordering, the croquettes are freshly fried and there is nothing more exciting than having your ticket number called and being handed a small tray of piping hot croquette (or croquettes). The crust of the croquette is crunchy, with the breadcrumbs just flaky enough to lend enough of a bite to the croquette, with delicious chewy meat cocooned inside the nest of breadcrumbs. A quintessential Japanese street food, croquettes are definitely a convenient snack you can buy to have on the go as you continue your Kobe Chinatown Street Food voyage. 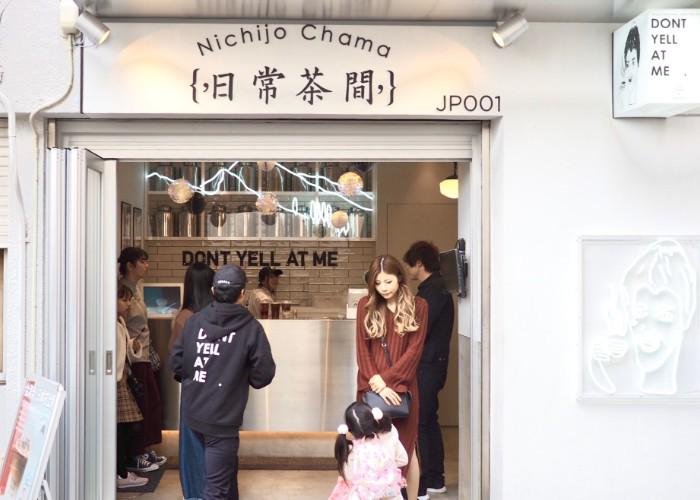 Affectionately known as bubble tea, the tapioca pearl tea craze has finally hit Japan and it is no surprise that these bubble tea shops have been popping up by the dozens over the last year. Nankinmachi has caught on to the hype and is now home to at least a dozen bubble tea stores. The “bubbles” are made from tapioca flour, shaped and rounded into black balls which are then slowly cooked into squishy, chewy pearls. These are then added to a variety of sweetened drinks, the most popular of which are milk tea-flavored drinks, as the milky concoctions complement the smooth chewy texture of the pearls. The latest to join the scene in Nankinmachi is three-months-old Nichijo Chama, whose specially crafted milk-tea drinks have quickly garnered a strong base of fans.

If you happen to be in Nankinmachi on a weekend, chances are, most bubble tea stores will be sprouting long queues just like the one at Nichijo Chama. Grab a cup and join the tourists and Japanese sipping cups of bubble teas as you leisurely stroll through Nankinmachi. 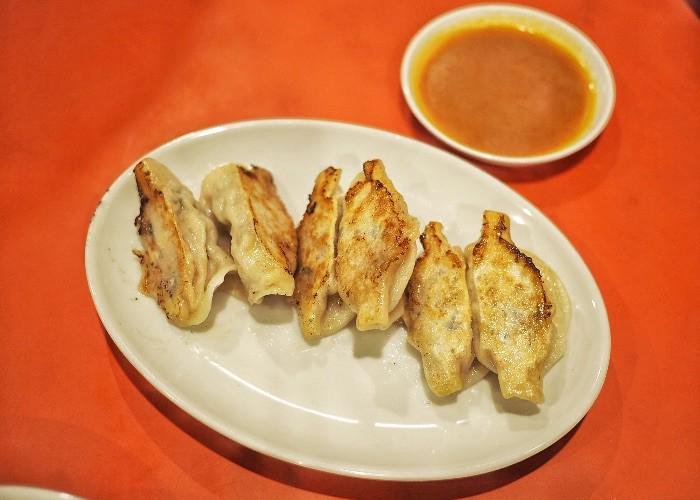 Although not conventionally associated with street food, gyoza found in Nankinmachi have concretely etched themselves onto many Kobe Chinatown Street Food lists. While gyoza are typically eaten with soy, sesame or vinegar sauces, Kobe Chinatown is home to gyoza dipped in a specially concocted miso sauce. In Nankinmachi, these gyozas are usually sold in small restaurants selling pan-fried gyozas, various steamed dumplings and different versions of Chinese noodles. We recommend Gyoza Gansoen. The pan-fried gyozas are served warm and freshly cooked, with an almost charred crispy bottom. Once served, you can prepare the miso dipping sauce with the range of condiments provided at each table. Mixing the miso dipping sauce is itself an experience and instructions are provided to create the ideal sauce. While you can certainly adjust the ratio of the condiments to your taste, we recommend that first-timers adhere to the recommended ratios when mixing the sauces, to create a full-bodied thick sauce. This is truly a unique experience that can only be found in Kobe and one you will certainly savor (in both senses of the word).

Although Chinatowns are no longer strange phenomenons for many international visitors, Kobe’s Chinatown is a one-of-a-kind that packs within it food stands, shophouses and restaurants that showcase the best of Japanese-Chinese fusion. As a cultural melting hotpot, Nankinmachi is definitely a must-visit that delights both international tourists and locals alike.

To get to Kobe Chinatown, the closest train station would be Motomachi, a stop away from Kobe-Sannomiya on the JR West Line. From Motomachi Station, a short 4 to 5 minutes walk will bring you to Choanmon Gate, also known as Chang’an Gate, Nankinmachi’s east and most popular entrance.

Curious about other must-try Kobe foods? Read our guide to What to Eat in Kobe. Or for an overview of the offerings of Asia’s largest Chinatown, check out Yokohama Chinatown Street Food Guide.

We strive to be as accurate as possible and keep up with the changing landscape of Japan’s food and travel industries. If you spot any inaccuracies, please send a report.
0
Click clap if you like this post
Sue Gan
A closet bibliophile, when she’s not on the hunt for delicious grub, Sue takes armchair expeditions to feed the bookworm eating at her soul.
SEE ALL POSTS
You may also be interested in
Kobe

What to Eat in Kobe: A Portal to Beef and Beyond

Beginner's Guide to Kobe Beef: What is Kobe Beef & How It's Rated