Yokohama, the capital city of Kanagawa Prefecture, is the second-largest city in Japan and home to the largest Chinatown in Asia: Yokohama Chukagai. At Yokohama Chinatown, you can get your fix of everything from Hong Kong-style egg tarts to Peking duck to Taiwanese noodle soups.

While you can certainly have an incredible meal at a sit-down Chinese restaurant in Yokohama and there's no shortage of restaurants offering tabehoudai (all-you-can-eat) deals, going on a street food adventure is definitely the best way to scope out the authentic Chinese foods that Yokohama Chinatown has to offer.

This Yokohama Chinatown Street Food Guide will introduce you to some of the most delicious savory and sweet street foods, as well as let you know which ones you can pass on with no regrets.

Here are 9 sweet and savory dishes to try at Yokohama Chinatown: 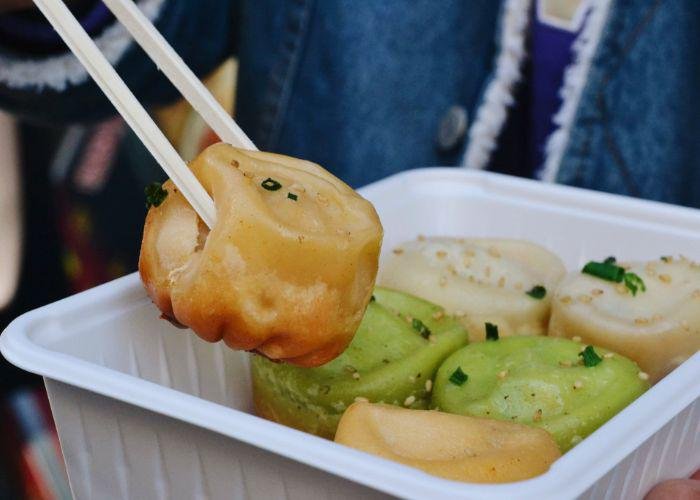 Yaki shoronpo, or pan-fried soup dumplings, are a staple of the Yokohama Chinatown street food scene. Filled with collagen-rich pork broth, these soup dumplings are popular with women, as collagen reportedly aids in keeping skin smooth and supple, slowing down signs of aging, as well as helping build muscle and lose fat.

This shop sells three types of soup dumplings: masamune shoronpo are stuffed to the brim with juicy pork, fukahire shoronpo contain thin strands of shark fin, and hisui shoronpo are filled with pork and seven kinds of vegetables.

How to Eat Soup Dumplings:

There’s an art to eating shoronpo. While some pioneers forge ahead with reckless abandon, daring to pop the innocent-looking little dumpling into their mouth whole, this route only leads to scalded tastebuds and shame.

Alternatively, just go ahead and eat it whole. But consider yourself warned! 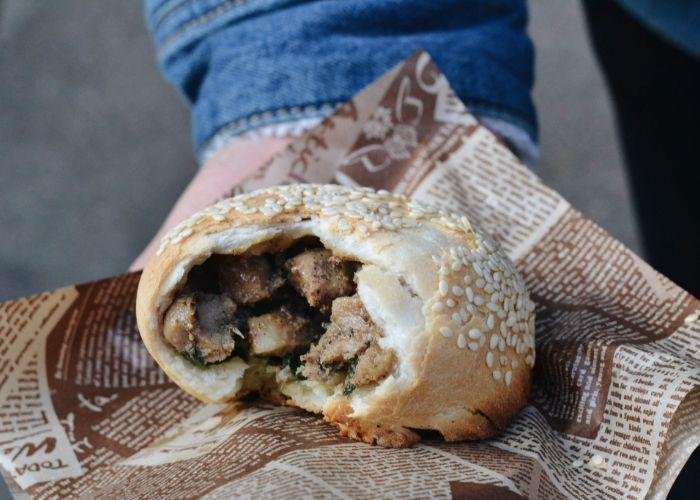 While Yokohama Chinatown is famous for chukaman (steamed Chinese buns such as nikuman meat buns and anman red bean buns), you can find steamed buns all over Japan in supermarkets and convenience stores. Now, koshou mochi, Taiwanese black pepper buns, are really something special...

Baked, rather than steamed, in a deep clay oven much like an Indian tandoor oven, they have a crunchy outer texture and a soft interior that's jam-packed with tender, peppery meat. They’re a street food staple of Taiwanese night markets, and are a hearty and filling option, with just enough spicy heat to warm you up on a chilly winter day in Yokohama. 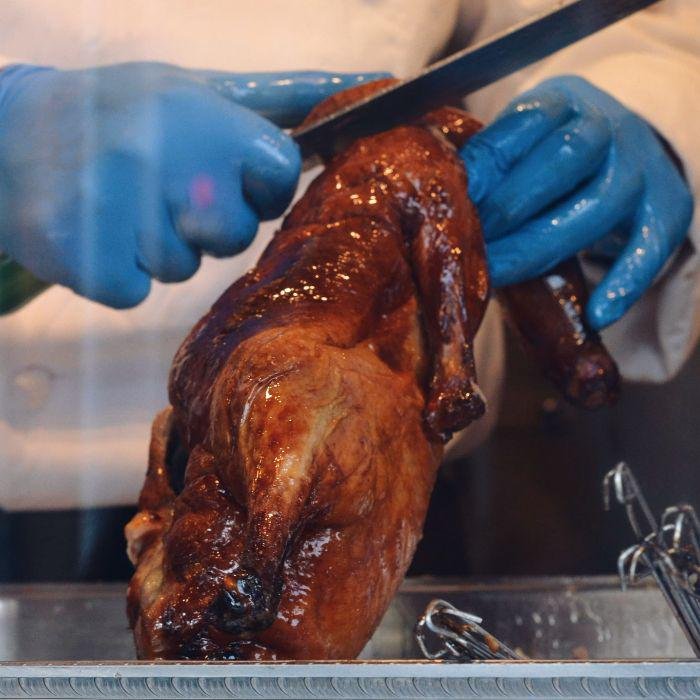 Hailing from Beijing, Peking duck is a delicacy among Yokohama Chinatown street food, with the price tag to match. Tuck into a whole Peking duck for a whopping 7800 yen, roughly 70 U.S. dollars, or half of one for 4000 yen.

Or, you could go for a rolled pancake wrap featuring a couple of freshly-sliced strips of Peking duck, drizzled with a sweet and savory sauce, and nestled up beside pan-fried veggies and a fresh leaf of lettuce.

But honestly, for the price of 250 yen, two thin slivers of Peking duck in a wrap are hardly worth it, especially as the flavor and texture of the Peking duck, a dish renowned for its crispy skin, are overwhelmed and dampened by the sauce (though to be clear, the sauce is pretty delicious).

So, when you’re beckoned by that ever-present line outside the Peking duck wrap shops, which seem to promise tasty things within, keep walking. This is one Yokohama Chinatown street food to pass on. 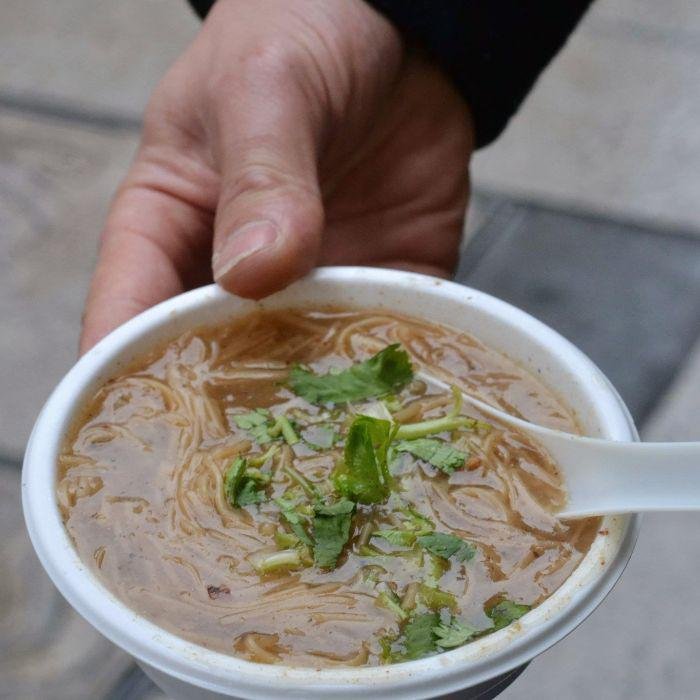 Another classic Taiwanese street food of Yokohama Chinatown, mensen is a Taiwanese oyster noodle soup made with oysters and misua (vermicelli noodles), and sometimes pork intestine.

Super warming and comforting, Taiwanese mensen is perfect for a chilly day or evening. The thin, slippery noodles are addictingly slurpable, and the broth is thick and smooth with a slight seafood-y brininess. The cilantro garnish adds a bit of brightness (but if your palate puckers at the mention of the divisive herb, you can ask them to omit it when you order).

Still have room for dessert? If not, go ahead and work up an appetite by taking a walk around the block and checking out some Chinese souvenirs, because you won’t want to miss out on these next Yokohama Chinatown street foods: dessert edition. 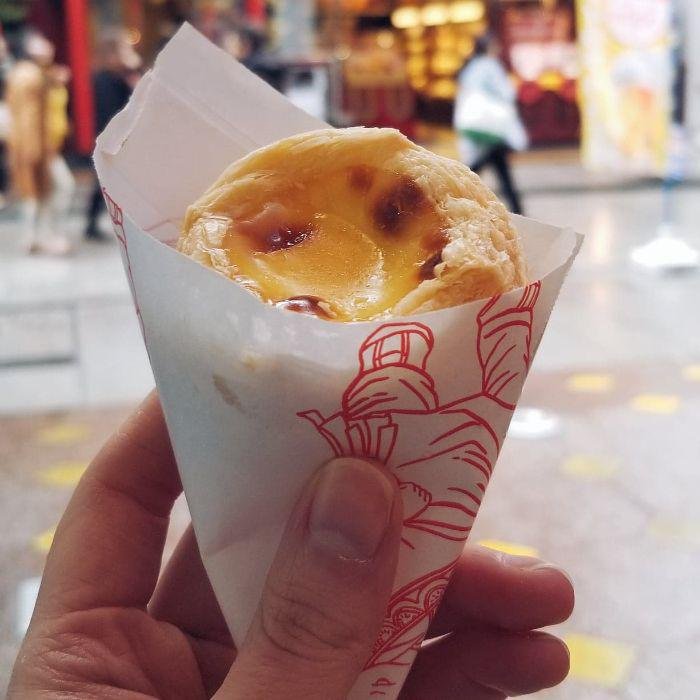 If you come to Yokohama Chinatown, a Hong Kong style egg tart is a must-try! The egg filling is smooth and custardy, and very subtly sweet. Even if you don’t have a sweet tooth, you can definitely enjoy an egg tart as a dessert after you’ve eaten your fill of street food.

The exterior is crispy and flaky, the dough perfectly laminated with those lovely layers that shatter when you take a bite. Somehow the puff pastry doesn’t feel oily or greasy, but very light and airy. It’s the perfect bite. 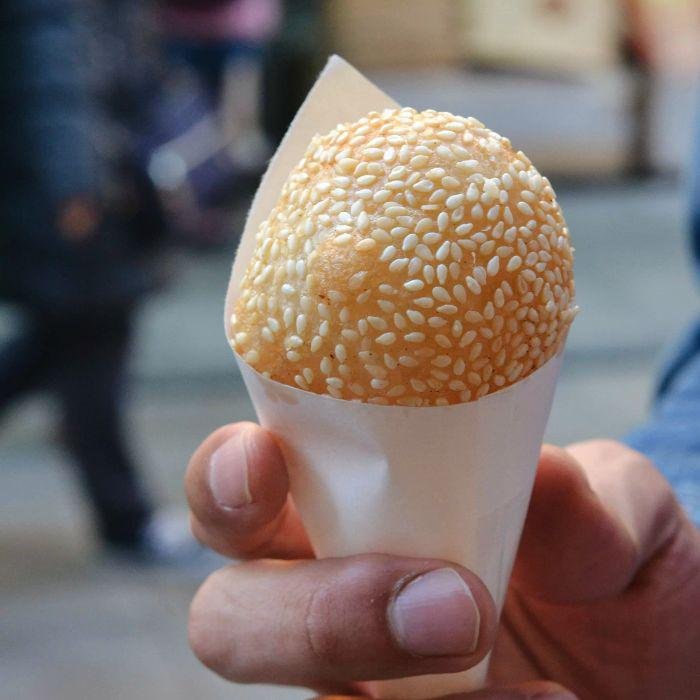 Of course, the fan-favorite age goma dango, or fried sesame ball, had to make this list of Yokohama Chinatown street foods. With the crispy, sesame-studded exterior and smooth red bean paste filling, sesame balls are pure joy in a bite. We’re talking ridiculously delicious, especially if you can get them while they’re still hot out of the fryer. 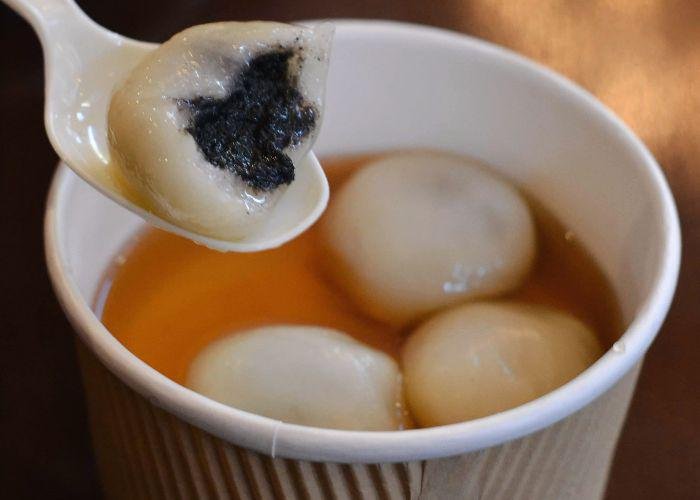 Called tangyuan in Mandarin Chinese, the Japanese name for this next Yokohama Chinatown dessert is more of a mouthful than the dango themselves: kuro goma an irishiratama, meaning black sesame-filled dumplings.

Swimming in an insanely yummy sweet ginger syrup, these ground sesame-filled mochi-like dango are yet another major hit! The kick from the ginger pairs beautifully with the sweet dango, which are chewy and stretchy and oh-so-soft.

The warm, gingery, syrupy broth would be very gentle on a sore throat; a nice pick-me-up if you’re feeling a little under the weather. While the syrup is quite sugary, it pairs well with the goma dango, which have a toned-down sweetness and toasty roasted flavor. 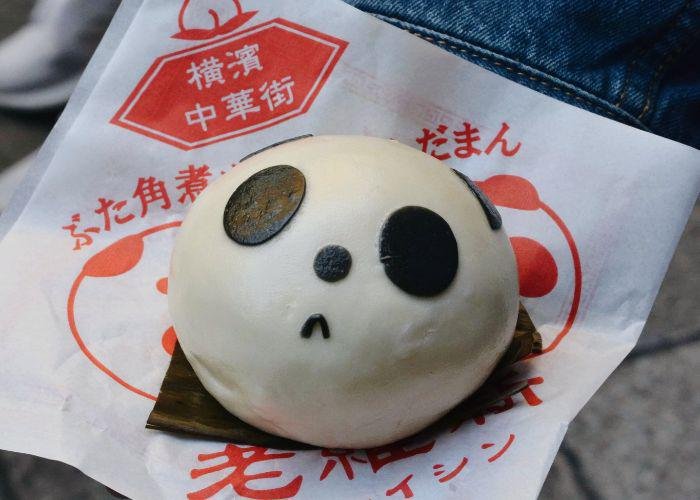 It comes as no surprise that the panda, the official mascot of Yokohama Chinatown, is also celebrated in the area's food. But while these adorable steamed panda buns certainly qualify as Instagram-worthy, the chocolate-flavored panda-man was a bit of a miss, as the flavor of the chocolate filling was on the blander side.

While the panda-man was a miss, try some of the other animal-shaped steamed buns; there may be a hit among them. These buns come in a variety of flavors and colors, with both sweet and savory options. The pig-shaped steamed bun, for example, has a pork filling, while the green panda bun is matcha flavored. 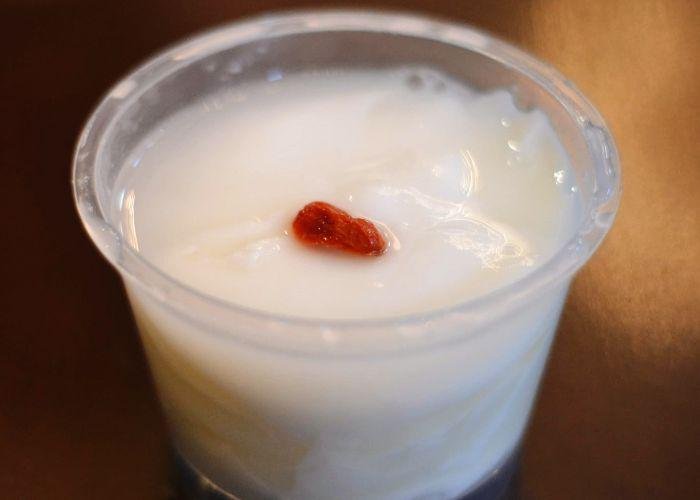 For me, annindofu is slightly reminiscent of the Chinese dessert douhua, which is a silky tofu pudding. But while the name “annindofu” sounds like it implies “tofu,” this dessert is actually made with agar-agar (a gelatin-like thickening agent made from seaweed) and not soybeans.

Annindofu has a gentle sweetness, slippery-smooth texture, and mild almond-like flavor. But, rather than almond milk, annindofu is made with apricot kernel milk, which has that almond-like flavor and a pleasantly fresh aftertaste.

Like the Hong Kong egg tart, annindofu is subtly sweet, and it is also light on the stomach so it's the perfect dessert to end with after indulging in your favorite Yokohama Chinatown street foods. 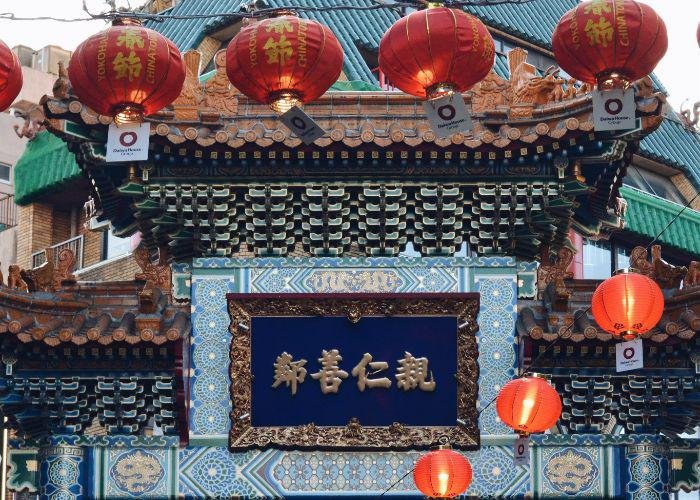 Looking for more food in the city, beyond these Yokohama Chinatown street foods? Check out our Where to Eat in Yokohama guide.

We strive to be as accurate as possible and keep up with the changing landscape of Japan’s food and travel industries. If you spot any inaccuracies, please send a report.
78
Click clap if you like this post
Rika Hoffman
Rika is a sourdough enthusiast, amateur film photographer, and pun-lover, born and raised in the suburbs of Philadelphia. A carb-based lifeform, she is always on the lookout for tasty bakeries in Tokyo.
SEE ALL POSTS
You may also be interested in
Yokohama

Where to Eat in Odawara