An hour and forty-five minutes by car and one hour by train and bus from Kyoto Station is the Obubu Tea Farm in Wazuka Town. Wazuka has a rich history of producing tea and accounts for almost half of all tea production in Kyoto. They’re most well-known for producing Uji tea. That day, had the chance to join the Kyoto Tea Farm Tour, Tasting, and Lunch in Scenic Wazuka, one of the award-winning food experiences selected by Eat! Meet! Japan.

On our way to the farm, we wind through the valleys of rice paddy fields, dwarfed by the hills that were beautiful greens, ambers, and reds and dotted with quaint rural villages that are home to traditional wood-paneled, and tiled-roof houses. The area is known as Chagenkyo, a member of the Association of The Most Beautiful Villages in Japan, and the reason we are here, is Japanese green tea.

The Obubu Tea Farm was created by a lovely, eccentric man named Akky. Akky originally came to Wazuka for a part-time job while he was at university, and while he was there, he fell deeply in love with tea after having a delicious cup of the region's famous Ujicha. So much so, that he dropped out of university and decided to dedicate the rest of his life to producing some of the finest Japanese green tea. He spent the next fifteen years mastering farming methods and the art of taking care and processing some of the most exquisite tea. In 2004, he partnered with his high school friend, Hiro, and Matsu, creating Kyoto Obubu Tea Farms.

The name “Obubu” is the slang for tea in the local Kyoto dialect, meaning that the name is technically Kyoto Tea Tea Farms; so nice they named it twice. Obubu has three main values: quality, community, education. They want the best quality tea which they believe comes from single-origin tea that is natural and fresh and believes in using as much of the tea plant as they can, resulting in less waste. They strive to develop deeper bonds between tea drinkers, tea farmers, local communities and tea entrepreneurs across the world, they also donate to several local charities.

In terms of education, Obubu strives to actively promote accurate knowledge of Japanese tea both locally and abroad and achieve this through tea tours, internships, and educational programs. They run two internships that anyone can get involved in for three months at a time, offering one in tea and one in agriculture, and since they started running the internships in 2012, they’ve had over 110 interns from over 20 countries.

After arriving and being introduced to everyone, we took a seat in a beautiful traditional room and were given a presentation by two of the interns and Hiro, one of the main partners. As the presentation began, a glass of houjicha tea which is a traditional welcome tea was handed out for us to try. It was warming and lightly roasted which resulted in a deep smoky flavor that was slightly sweet. It was made from the lower spring leaves that were roasted, and it’s low in caffeine content. It’s harvested from the lower leaves for a deeper flavor.

While we were enjoying this cup, we were informed about how tea is grown, the different ways you can grow the plant it to manipulate the taste, the difference in oxidization, and about how changing the temperature of the water changes the taste of the tea. For example, brewing a certain tea at 80 – 100 degrees Celsius will bring out different flavors than using water that is at 50-60 degrees Celsius. After, we tried another tea, Sencha of the Spring Sun, which is made with leaves grown in direct sunlight and is made from the leaves of the first harvest of the spring that had pleasantly light and grassy notes, brewed in a clay teapot. We were shown a couple of short films about how they harvest the tea on the farms and how they dry it by hand and machine which was truly insightful.

After the introduction, we all bundled into minivans and were whisked up to one of their hidden tea farms that were around a five-minute drive away. The drive wound up narrow tracks that had deep drops down the hillside, luckily the staff knew the roads like the back of their hands. We arrived at the farm and walked up a steep path which resulted in a (slightly out of) breathtakingly beautiful view of the surrounding hills and valleys of the Wazuka area. It was a mix of dense bamboo forest and row upon row of groomed, perfectly primed tea bushes that were etched into the hillsides. This was their second-highest plantation, with their highest reaching 540 meters above sea level, which they refer to as the heavenly hill. 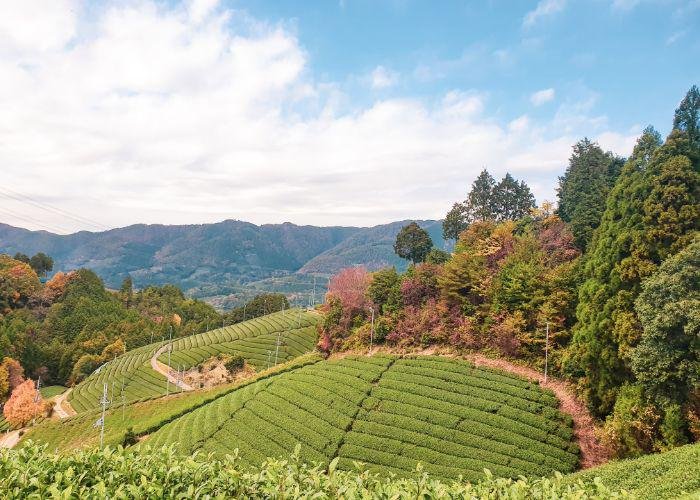 While we were admiring the view, one of the staff who started out as an intern, George, told us about the methods the farm uses to harvest the leaves, and how due to the river running through the hills and valleys, there is always a gentle breeze on the hills that results in the perfect conditions for growing tea. Along with the climate being hot in the summer and cold in the winter, these weather conditions create tender, soft, and slightly sweeter tea leaves. While we here hilltop, we were offered two other types of tea to taste, Kyobancha, a roasted winter harvest tea, and Kukicha Mejiro, which is made from tencha stems that’s used for creating some of their matcha. They were both lovely and warm on the chilly and overcast autumnal morning.

After the swift descent down the hillside passing the countless tea plantations, we were taken to the factory where they sort, dry and package their harvests. George showed us all the different machinery that is used in the process and how they all work and what they all do. Most of the machinery we saw was donated to Obubu by other local farms and some were many years old. We were walked through the process and saw the special hand-rolling table that they use when hand-rolling the tea. The total hand-rolling process can take around six hours and is truly a skill. The leaves can reduce from 80 kilograms to 15 once the drying process is complete. Of course, because of how labor-intensive it is, and how much tea the farm produces, they primarily use machines to dry and roll the tea. 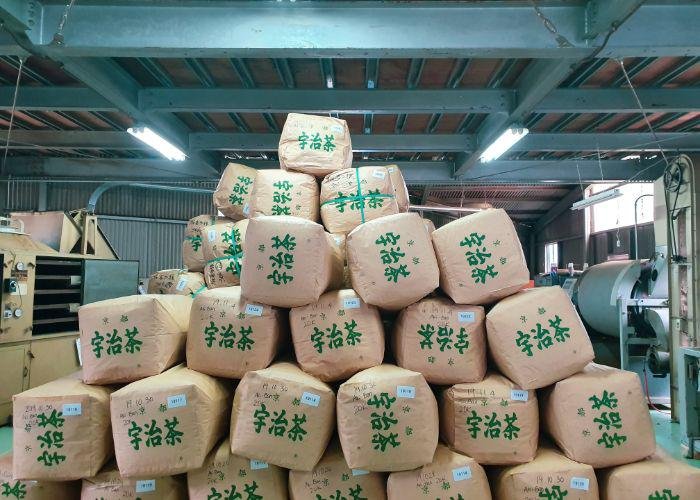 After having worked up quite the appetite, it was finally time for lunch. We headed into the intern’s house just across the road from the factory, and just behind the main building, where we were seated for a delicious lunch. As we walked up the path, we noticed a small tea plantation and were told that it was their experimental tea field. This is where they experiment with different growing conditions and shading to create different tasting teas. All the meals used locally produced ingredients from the surrounding area and options included mountain vegetables and green tea soba noodles and vegetable curry, of course, accompanied by a pot of tea. The food was delicious and while you were eating, you could look out the window across to the rice paddies that were at the foot of the amber-specked hillside and you truly felt that you were nestled in the heart of rural Japan. 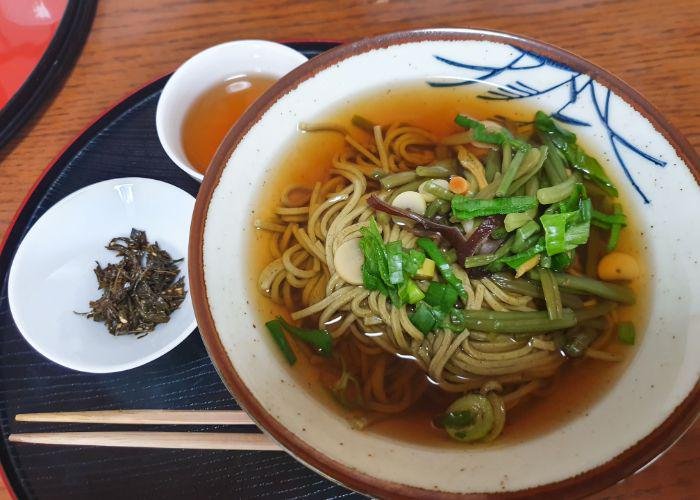 Following the incredibly delicious lunch, we moved back to the main house and sat down once more for a tea tasting experience and brewing lesson led by George and the interns once more. In this final tea tasting session, we were to taste a further five teas.

We were first handed a martini glass filled with ice cubes and Gyokuro, one of the rarest Japanese green teas, at the bottom. We were told to wait until the ice had melted before we tried which was the best way to enjoy this type of tea and that it was to be our last drink.

Next up was Genmaicha, which entails mixing one of Japan’s most popular teas, Yanagai Bancha leaves, with roasted rice. An odd combination you might think, that’s until you try it and then you wonder how you haven’t possibly had this before as it was delicious.

The next tea was Kabuse Sencha and it was a distinct umami tea that was made with two different brewing methods. The water was brewed at two different temperatures and left to brew for two different time periods. The pouring method for this tea was unique and made sure that each glass received the same developed flavor.

This was followed by a Japanese Black Tea which was a deep, nutty and full-bodied in flavor.

Next, George taught us how to make matcha using the traditional bamboo mixer and how to mix it properly in two different stages. Finally, we were able to drink the melted ice brewed Gyokuro which has been shaded from the sun while growing for three weeks, resulting in a silky, rich umami flavor that was a deeply refreshing, elegant and lovely note to finish our tea tour and tasting experience on.

Our day out at the Obubu Tea Farm was over and what a day it had been. Within around 4 hours time, we tried nine different teas that they produce on the farm, all with different complexities, tastes, temperatures, and growing methods. You could tell from our short time that we had spent on the farm that everyone involved who worked on the farm had a genuine passion for Japan and the tea in which they produce here; that alone, is worth coming for, but of course, you must come to try all of their wonderful teas! They have 46 different types available to buy on their website, and ship almost everywhere.

Their passion is what really makes this farm tour experience unique from others that I have experienced, and although it takes a little longer to get there compared to other tea farms, it’s totally worth it.

Book the Kyoto Tea Farm Tour in Wazuka, or check out these other Japanese tea experiences in Kyoto!