Japan is all about food culture: ramen, gyoza, sushi, takoyaki, gyudon, and many others. But, no visit to Japan would be complete without having tried some sake. Sake is the result of fermenting rice and water into alcohol. Very popular in Japan and overseas, sake is the quintessential Japanese alcohol. But did you know that in Japanese, “sake” refers to alcohol in general (including beer, wine, and spirits)? The Japanese refer to sake rice wine as “nihonshu,” translating to “Japanese alcohol.”

On the shelves of the liquor store, in bars or your local izakaya, from cheap bottles to expensive ones, many variations of sake exist. But the real secret of good sake resides in five key ingredients: water, rice, yeast, weather, and the skills of the toji (chief sake maker).

Should you drink it chilled, warm, or at room temperature? What are the different types of sake? Nihonshu can be overwhelming to try for the first time, but we promise with all those alternatives, you’ll surely find the right fit for your palate!

Not sure where to start shopping? See our guide, Where to Buy Sake in Tokyo! 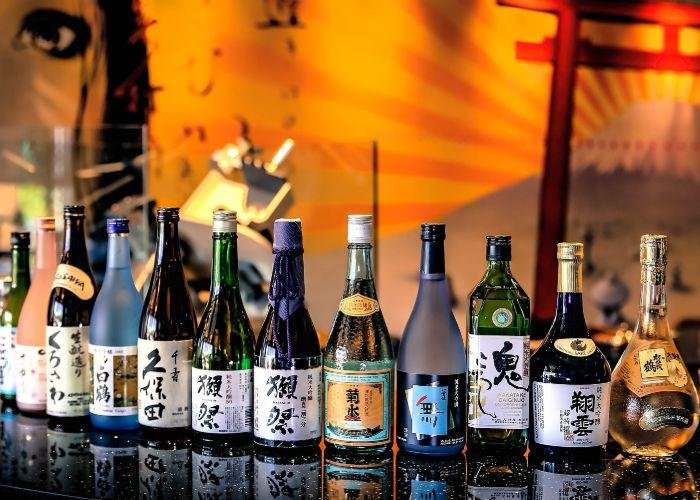 As there is no written proof, we do not know for sure when Japanese people first started to make sake. Experts believe the drink came from China and was established in Japan about 2,500 years ago when rice culture became popular.

The primary form of Japanese sake making was pretty rudimentary, people would gather and chew nuts and rice, spitting them into a communal container, then store it and let the time ferment it. The enzymes present in the saliva would kickstart fermentation.

This “saliva process” did not last long, as people discovered koji, a filamentous mushroom (or “mold”) used to ferment the rice. This new method spread widely throughout Japan during the second half of the Nara period (710-794), founding the basis of contemporary sake brewing. During that era, Japanese sake was only produced at the imperial court, a privileged drink for the emperor.

From the 10th century, temples and shrines started their distilleries and sake became a part of the religious ceremonies and festivals in Japan, linking humans and Shinto gods together in a practice that is still prevalent today. 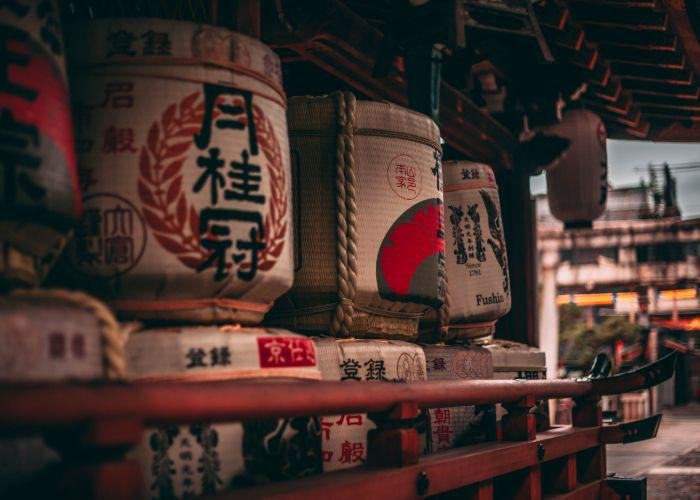 Sake producing became a viable option for commoners during the Meiji Restoration, from 1868 to 1912, a time when anyone with the financial resources could open their own distillery. While the sake production boomed across Japan, the government increased the taxes on the drink, forcing breweries to close down. However, some breweries that survived this era are still active today.

At first, Japanese sake was only made from water and rice, but this traditional “pure sake” evolved during World War II when rice shortages occurred. Brewers, to maintain their volume, added pure alcohol and glucose to the traditional drink. A new technique was born, and nowadays more than half of the sake produced is still made this way.

Over the decades, sake became more and more popular, not only among Japanese but also in Europe and America. Today the drink is synonymous with Japanese culture and tradition.

How is Sake Made? 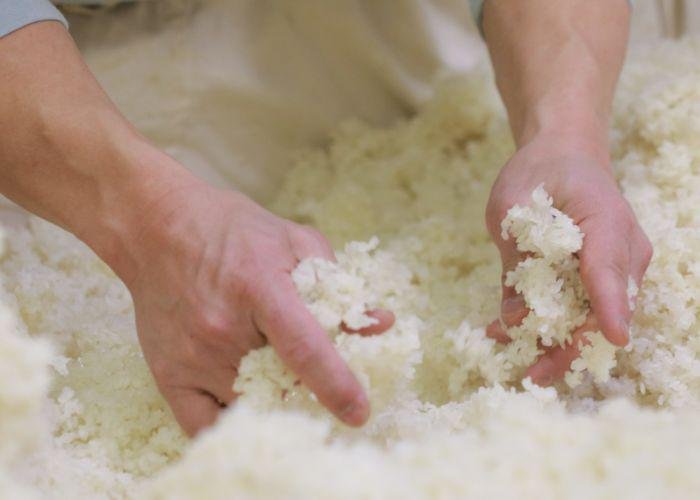 Nihonshu, Japan’s national drink, translates to “Japanese alcohol” and is often referred to as “rice wine.” But although the drink resembles wine, its brewing process is far more similar to beer.

In total, seven steps are required to produce sake. The differences in the end products depends on the quality of the rice and water, the variations of temperatures, the koji mold, and the skills of the sake maker.

Before even thinking of making sake, the raw rice has to be polished (or milled). The process has to be done gently to remove the external layer of each grain, exposing the rice kernels. The rice needs to be polished to remove any impurities and to contribute to a smoother taste. The rice is then polished down to a certain percentage, influencing the final taste of the sake. Rice that is polished to less than 50% is called Junmai Dai Ginjo (higher quality); the more rice has been refined, the greater the percentage.

Once the rice has been polished, it is time to wash, rinse, and soak it. Those steps are always done under the clock. The rice that has been milled more will absorb water faster, reducing its soaking time. This process can be done in a few minutes or overnight.

During the 3rd step, the soaked rice is then steamed in a steamer. Once the process is over, the steamed rice is usually divided into two, with some going to the fermentation room, while the rest is sake kasu, which will become koji rice.

But what is koji? Koji is steamed rice inoculated with koji mold. This secret ingredient will become the sugar for the yeast, creating alcohol and carbon dioxide. To create koji, breweries separate the steamed rice and lay it flat on sheets in a very humid room with dead air; this room is called the “koji room” and is considered to be sacred by sake brewers. To make good koji, the room temperature needs to be optimal and the spores need to be spread out evenly with great precision over the steamed rice. After a few days, koji is created, giving the rice a sweet chestnut aroma.

The Japanese sake fermentation process occurs in different steps; depending on the brewery, all those steps can happen in the same tank. The fermentation starter is called shubo: a mix of steamed rice, water, yeast, and koji. This basic mixture will increase over the days as the yeast multiplies. After a few weeks, the shubo becomes the “mash” or moromi, basically the cake on the top. From this step, more water will be added regularly over the days. The yeast will then convert into sugar and alcohol; this is when fermentation happens. The whole process usually lasts around 35 days.

When the fermentation process is finally done, the sake is pressed and filtered. The usual way to press sake is through an industrial press that will gently remove the moromi and leave a translucent liquid: the sake.

Once it is ready to be bottled, Japanese sake is first pasteurized. For that, the sake is heated to 60-65°C to kill the bacteria present. 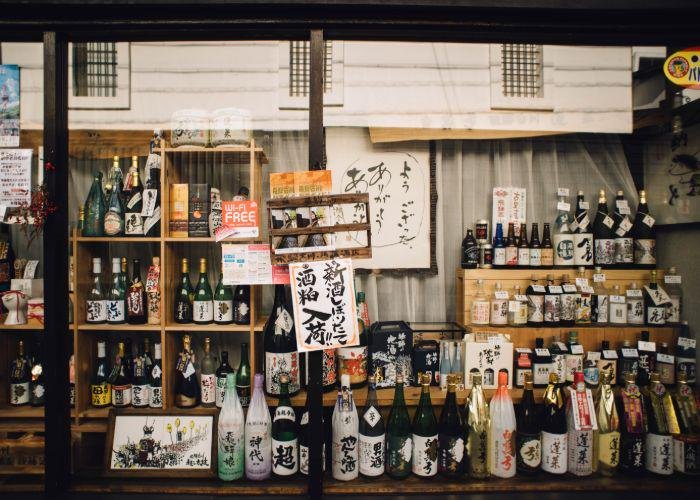 Even if all sake is made with the same basic process, many differences can occur depending on the raw material used. There are so many types that it can be overwhelming to see all the different bottles lined up at your local izakaya. Depending on the brewery, alcohol can also be added to the mix, creating another type of sake. Here are the principal ones:

Junmai-shu is the original Japanese sake, it contains pure unmodified sake and no extra alcohol is added to it. Depending on the brewery, the Junmai-shu sake contains rice that has been polished down to 70%. Junmai-shu is tasty and usually heavier and richer than other sake, with a higher level of acidity.

Ginjo-shu sake has a subtle and light flavor. To make this sake, brewers use a special type of yeast and the fermentation process occurs at low temperatures. The grain of rice used for the Ginjo-shu sake has been polished down to 60%.

Daiginjo-shu sake is basically Ginjo-shu sake but it is made with rice that has been polished down to a minimum of 50%, leaving the sake with a full body and a delicate taste.

Honjozo-shu is a type of Japanese sake where alcohol has been added during the fermentation process. Adding alcohol to the brew gives to the final sake a light and subtle flavor with a drier taste. To make Honjozo-shu sake, brewers use rice that is polished down to 70%.

Namazake can be any type of sake including Ginjo-shu and Junmai-shu, the only difference is that the alcohol hasn’t been pasteurized. This particular sake needs to be refrigerated to keep the initial taste. Kept at a warm temperature, the sake will change in flavor and aroma.

How to Enjoy Sake 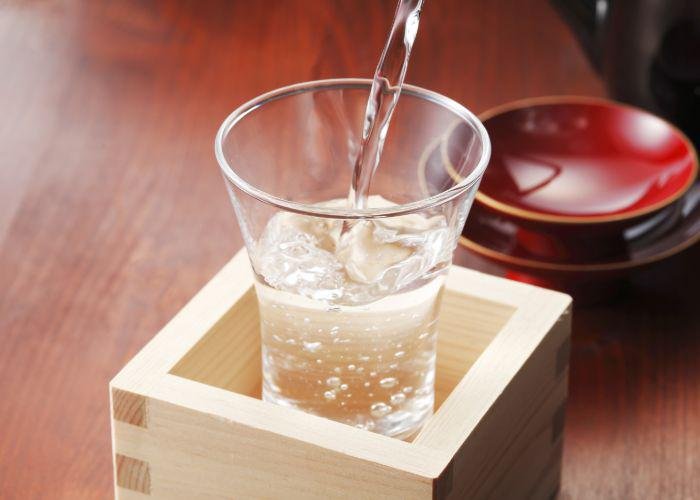 Japanese sake is traditionally served from a “tokkuri,” a tall porcelain bottle, into a small porcelain cup called “ochoko.” In some restaurants, sake can also be served in a glass placed into a wooden box, referred to as “masu.”

Now that we are done reviewing the technicalities of sake, it is time to finally drink it! Sake can be drunk just about everywhere: in bars, restaurants or during tasting experiences, you just have to choose. Sake can be appreciated on its own or over a meal, as it marries well with Japanese cuisine.

The most common question when drinking sake is “At what temperature should I serve sake?” The way to enjoy sake often depends on the season and the outside temperature, preferring chilled sake for summer and warm sake to combat the rough winter. Another common rule is that top-quality sake (when the rice has been milled down to 50% or under) should be drunk chilled or at room temperature, while cheaper sake are more enjoyable when served hot. Hot sake is called atsukan. But those ground rules do not have to be respected, in the end, everything comes down to personal taste, so you should definitely trust your taste buds! And if you ever doubt, just ask the waiter for recommendations.

Sake has always been a way to connect people together, so if you are not drinking alone, make sure to fill the cup of your drinking buddy before serving yourself. He will make sure to do the same for you.

Now that you have some background knowledge about Japanese sake, check out sake experiences in Japan and visit sake breweries, experience sake tastings, and learn firsthand how sake is made.

We strive to be as accurate as possible and keep up with the changing landscape of Japan’s food and travel industries. If you spot any inaccuracies, please send a report.
0
Click clap if you like this post
Emilie Lauer
Emilie is a passionate traveler always looking for the next adventure. With French and Italian origins, food is her mantra. In Tokyo, you’ll find her in front of a ramen bowl or with her dog, “Sushi.” Her favorite question? What do we eat next?
SEE ALL POSTS
Stay in the Loop!
We are always discovering the latest foodie trends.Sign up to receive insider tips about the food scene in Japan's most extraordinary areas.