Ever since tea was brought over to Japan from China, it’s been an important part of Japanese culture. Today, Japan is one of the top tea-producing countries in the world; in particular, Shizuoka has the highest Japanese tea production of any prefecture in Japan, with around 40% of Japan's tea farms located there. If you’re new to tea drinking then you might be surprised to see how many different types of Japanese tea there are available. From everyday sencha and luxurious gyokuro to the famous powdered matcha that’s used in traditional tea ceremonies, there’s a style for almost every taste and occasion.

In this article, we’ll take you through the different kinds of Japanese green teas and herbal teas that are available, to give you a better idea of which ones to choose next time you’re in a teahouse or a specialist tea shop. So put the kettle on and let’s dive into the world of Japanese tea!

The Main Types of Japanese Tea 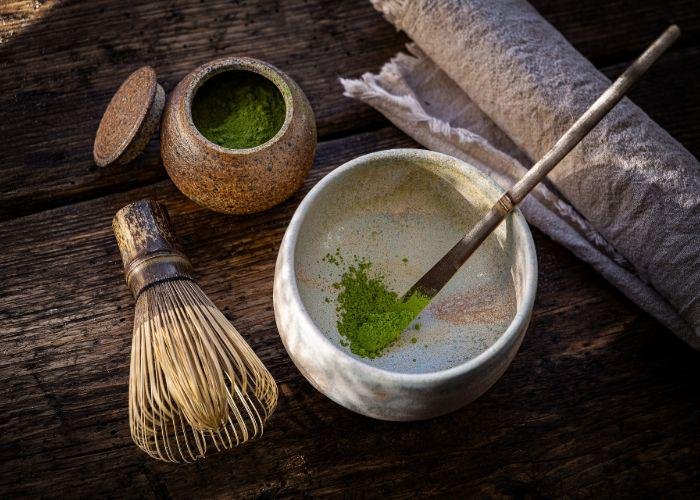 Each type of Japanese tea has its own distinctive color, flavor, and aroma, making it a wonderfully versatile drink. Here, we list nearly a dozen types of green tea, a handful of other types of tea from the same tea plant, and a few Japanese herbal teas. Some of the most common varieties of Japanese tea include:

Teas Made From the Camellia Sinensis Plant

A little-known fact about tea is that both green tea and black tea come from the same plant. The leaves of the Camellia sinensis plant are used to make a variety of teas; the difference comes from the post-harvest tea production process. Here we have listed the names of Japanese teas, including several varieties of green and black teas, with explanations about the differences in production, taste, and brewing instructions. 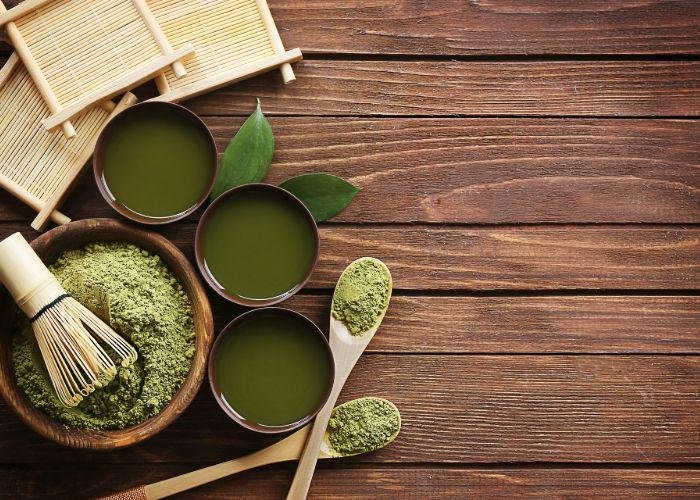 Matcha is perhaps the most famous of all the different types of Japanese tea worldwide; and in addition to being served as a drink, it is also used to flavor all sorts of sweet and savory foods. A powdered tea, it's made from high-quality leaves that are shaded from the sun for a few weeks before harvest.

Hot water (ideally around 80ºC/175°F) is added to the ground leaves and then frothed using a chasen whisk crafted from a single piece of bamboo to create a frothy, bright green drink.

Best served in beautiful types of chawan (tea bowls), the perfect place to try matcha is at a traditional Japanese tea ceremony, where you can experience the precise tea etiquette of Japan's historic ritual.

Tencha is the name for the tea leaves that are ground up to make matcha, however, it’s also possible to brew tea with the unground leaves. Unlike most other types of Japanese green tea, tencha leaves are not kneaded or rolled after being steamed and dried. This means that the leaves remain lightweight and flaky, and often need to be pressed down into the water when brewing the tea.

It should be made with slightly cooler water than matcha, around 75ºC/165°F, and steeped for 2-3 minutes. 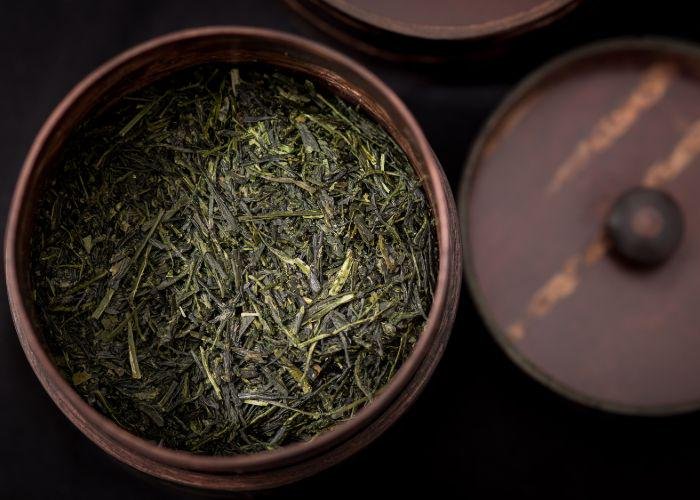 Ryokucha is a general term for Japanese green teas, of which there are four main grades of tea. The main difference between them is the degree of shading when they are harvested.

Konacha or “powder tea” is created from the leftover bits of the top-quality tea leaves that are used to make gyokuro and sencha. Despite the name, it’s not a completely powdered tea like matcha as the leaves are not ground. Due to the small size of the tea fragments that it’s made with, konacha has a vibrant green color and strong flavor in comparison to other types of Japanese green tea.

Brew in just-boiled water for about 30 seconds – any longer and it might be too astringent – and infuse no more than twice. 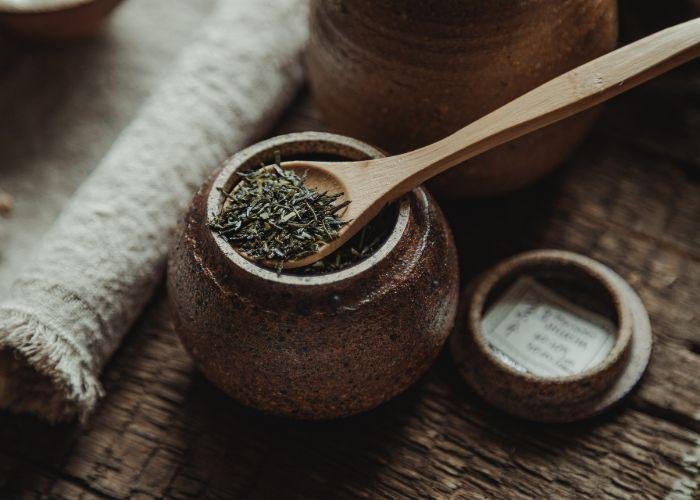 Another type of ryokucha, shincha translates as "new tea," and refers to leaves picked in the very first flush of the season and then quickly processed in a similar way to sencha. These fresh young leaves produce tea with a sweet, grassy taste and refreshing aroma, plus a low caffeine content. Shincha is believed to contain more vitamins and nutrients than other tea leaves and is only available for a limited time during the spring – which is why it’s so highly prized.

Translated as “bud tea,” mecha is one of the rarer tea varieties, created from the buds of the tea plant rather than the leaves. This results in a small rolled-up shape and gives the drink a concentrated umami taste and rich, fragrant aroma once brewed. It also has a high caffeine content, making it a great alternative to coffee. 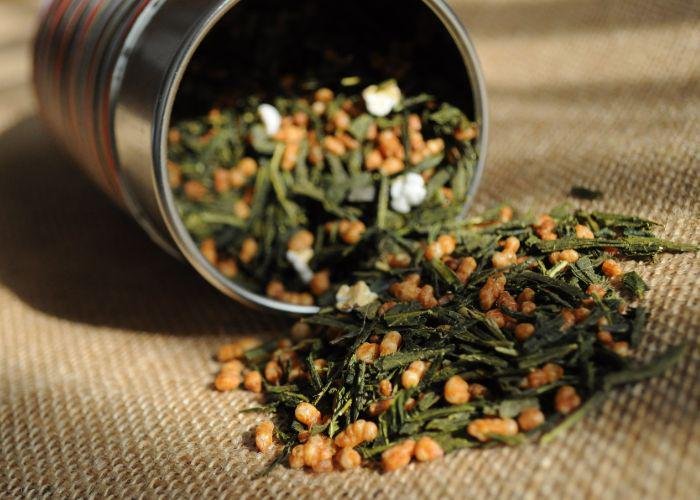 Genmaicha is one of the more unique types of Japanese tea, made by mixing tea leaves (usually sencha or bancha) with puffed and roasted brown rice. This gives it a distinctive toasty and nutty flavor and light yellow color, plus naturally lower levels of caffeine because it contains less actual tea. Keep an eye out for different varieties, such as genmai mixed with matcha powder! 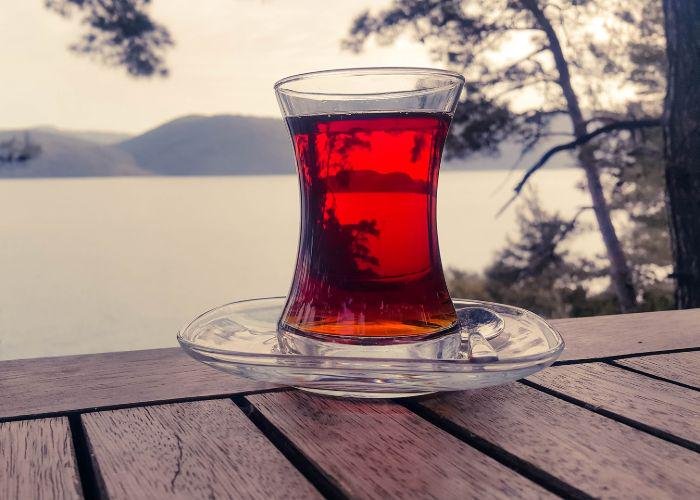 More commonly called black tea in English, kōcha literally means "red tea" and is named for the rich amber color of the brewed drink. You’ll sometimes see it referred to as wakocha, meaning "Japanese red tea," to distinguish it from black teas produced in other countries. It’s an oxidized and fermented tea with a mild, sweet flavor that’s very smooth to drink.

Brew in freshly boiled water for about two minutes – like all types of Japanese tea, there’s no need to add milk!

Kamairicha is one of the rarer types of tea and is unique for being pan-fried rather than steamed. This actually makes it closer to Chinese tea than most other types of Japanese green tea and gives the leaves a distinctive curly shape. The brewed tea has a mildly roasted aroma and rich flavor with low astringency.

Another unique style that’s closer to Chinese tea visually is tamaryokucha, also known as guricha. Unlike other types of Japanese tea, the leaves are not rolled into needle shapes and instead have a curly shape like kamairicha. The difference between the two is that tamaryokucha is steamed rather than pan-fried.

Brew at 80ºC/175°F for one minute for a low astringency drink with a pleasant, mellow flavor.

Houjicha is a newer variety of tea, thought to have originated in Kyoto about 100 years ago. It’s made by roasting tea leaves (usually bancha or sencha) after they’ve been steamed, which gives them a unique red-brown color reminiscent of the fall. The chemical change this produces gives the tea a lower caffeine content and removes most of the bitterness from the drink. Houjicha has a darker color than most other types of Japanese tea, as well as a more earthy aroma and smoky taste.

Whereas most types of Japanese tea are made using tea leaves, kukicha is unique because it uses the twigs and stems of the plant. Once brewed, it tends to have a sweeter flavor and lower caffeine content than other green tea varieties. That makes it a great choice if you prefer a drink with very little bitterness. 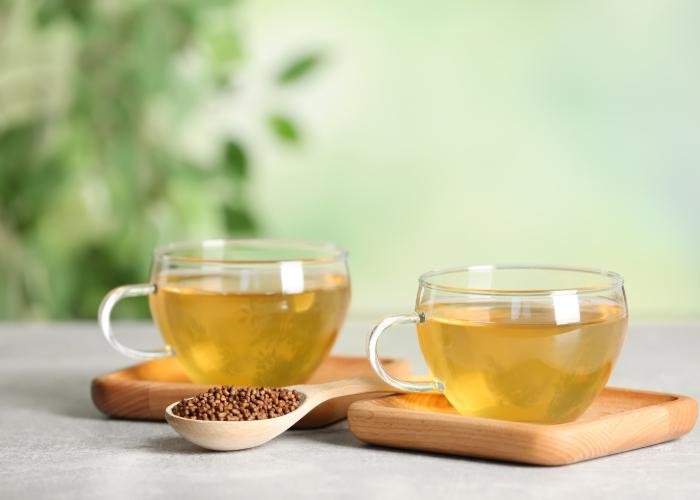 Sobacha, or buckwheat tea, is a herbal infusion made using roasted buckwheat kernels. This makes it entirely caffeine-free, so you can drink it comfortably throughout the day. The drink has a sweet, nutty flavor, a slightly toasted aroma, and a mild yellow hue when brewed. It’s popular for its anti-inflammatory properties and high level of antioxidants.

Infuse in boiling water for about three minutes, or enjoy iced in the summer months. 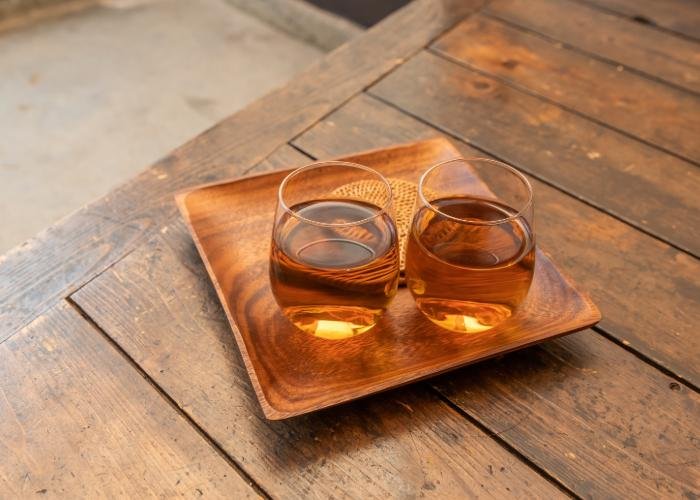 Mugicha is another great caffeine-free tea, made from roasted barley. Thanks to its refreshing taste, it’s one of the most popular types of Japanese tea to have brewed cold in the hot summer season. It’s also said to be great for digestion and enhancing your immune system. Just be aware that it’s not gluten-free. Caramel-colored and mild in flavor, mugicha is readily available in bottles from convenience stores and vending machines.

To make it at home, use freshly boiled water and infuse it for about five minutes. You can also brew it cold and keep a pitcher of it in the refrigerator to enjoy chilled.

A popular choice for special occasions such as weddings and other celebrations, sakura-cha (also known as sakura-yu) is a kind of tea that's made using cherry blossoms. The petals are pickled in salt and plum vinegar before being dried so that they can be enjoyed all year round. This gives the drink an unusual taste, with a hint of saltiness and a flowery fragrance.

Simply add hot water and enjoy the beautiful sight of the petals unfurling slowly in the bottom of your cup. If you find it a bit too salty, try rinsing the blossoms before brewing.

Another of the more unique types of Japanese tea, kuromamecha is made from roasted black soybeans. This gives it a nutty, toasty flavor and savory aroma. The drink is renowned for its health benefits and is thought to help with weight loss as well as having anti-aging properties.

Add freshly boiled water and allow to steep for about five minutes. Alternatively, leave it to chill in the fridge for a refreshing summer drink. You can even eat the beans afterwards!

A Quick Recap of the Main Tea Varieties 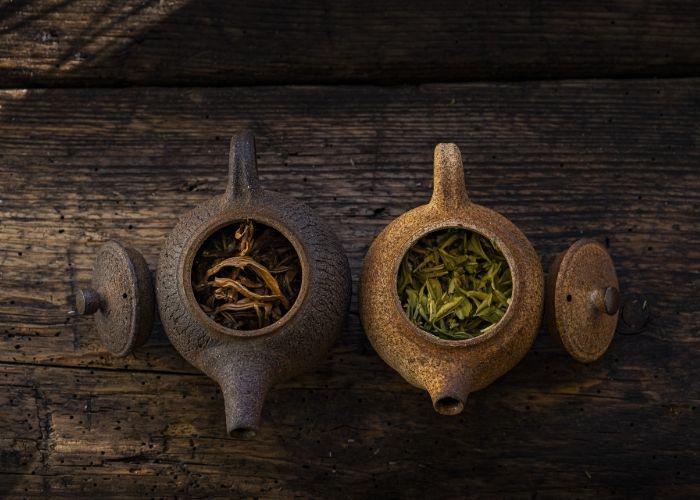 Don’t worry if you feel like this has been a lot of information to take in! The more you explore all the different types of Japanese tea, the more familiar you’ll become with how to brew each one and which varieties you prefer. Until then, here’s a quick cheat sheet to help you find the specific type of green tea (or herbal tea) for you:

Most types of Japanese tea can be infused more than once, with each successive cup having a slightly different color and flavor. You can also change the taste and astringency by adjusting the steeping time, so feel free to experiment a little. If making tea in a pot for many people, pour a little tea at a time in each cup, going around to all the cups multiple times in the same order until the teapot is empty to ensure each one has a balanced taste. Feeling peckish? Green tea pairs perfectly with Japanese sweets such as wagashi, because they offset the natural bitterness of the drink – so why not see if you can find your favorite combination!

Want to dig deeper into the world of Japanese tea? Check out these tea farm tours in Japan.

Or, join the Online Wagashi Making Class to learn how to make classic Japanese teatime sweets at home!

We strive to be as accurate as possible and keep up with the changing landscape of Japan’s food and travel industries. If you spot any inaccuracies, please send a report.
6
Click clap if you like this post
Ashley Owen
Ashley is a freelance travel writer from the UK who spent the last two years living in Japan, and is about to embark on her next adventure to New Zealand. She's always on the lookout for exciting new vegan treats wherever she goes!
SEE ALL POSTS
You may also be interested in
Culture