Characterized by a rich and juicy pulp, and a mild sweet taste with a delicate bitterish aftertaste, eggplant is undoubtedly one of the most outstanding ingredients during the summertime. Known for its versatility, which makes it the star of many traditional summer dishes around the world (such as the Italian parmigiana or baba ganoush from the Middle East), its use in cooking is popular in Japan as well.

Looking for more Japanese recipes? Check out our posts on how to cook goya (Japanese bitter melon) and nagaimo mountain yam or browse online cooking classes!

Up until now, if your choice of eggplant has fallen on the usual eggplant with a rounded shape, slightly "fat" and with a dark purple color, (I am referring to the "American" variety, the most common one) know that, in reality, the biodiversity of eggplants goes beyond imagination.

Walking through a farmer's market, you'll observe that its shapes and colors are variegated. You will find eggplants with white or green skin, Indian eggplants characterized by a small shape and a dark purple color, "Sicilian" eggplants, distinguished by white streaks on the skin (which disappear during cooking), and Thai eggplants, easily recognizable by their small shape and dark green color.

Among all of them, even in Japan, there is an autochthonous variety, which among all the eggplants previously described, it will not be difficult to identify. The Japanese eggplant, called nasu, is known for its elongated and thin shape, dark purple color, and pulp that's almost seedless, which reaches a creamy and soft texture once cooked.

The Japanese eggplant has a very delicate flavor, less bitter than other varieties (for this reason they don’t need to be salted before cooking them) but thanks to the spongy pulp, they can easily absorb flavors when seasoned with the right ingredients.

Here are three of my favorite Japanese eggplant recipes, which are also among the much-loved staple dishes of izakaya bars and Japanese home cooking! 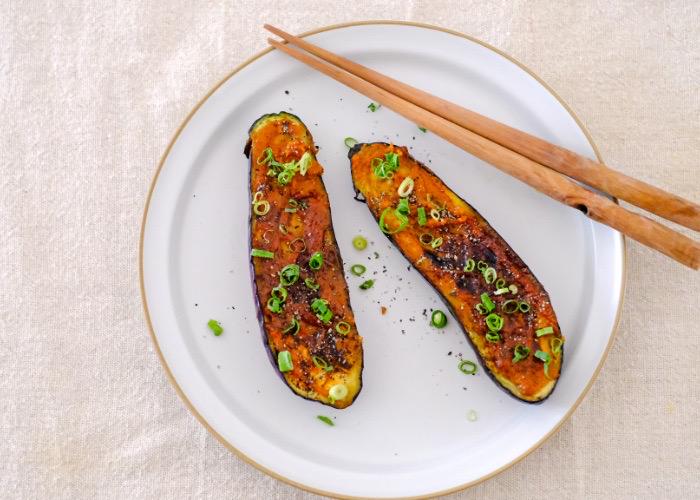 Nasu Dengaku is a simple dish, delicious to eat both hot and cold as well as a perfect accompaniment for rice, or a snack with sake.

Its preparation involves cooking the eggplant in a pan with sesame oil and glazing with a red miso-based sauce. With its soft texture and rich sweetness, this Japanese miso eggplant is a perfect treat for summer.

After washing the eggplant, cut the skin into strips. In this way, we will facilitate the cooking of the flesh. Next, divide the eggplant into two equal parts vertically, and make incisions in a grid pattern.

(Be careful not to make incisions too deep or you will risk that the heat will ruin the shape of the eggplant). 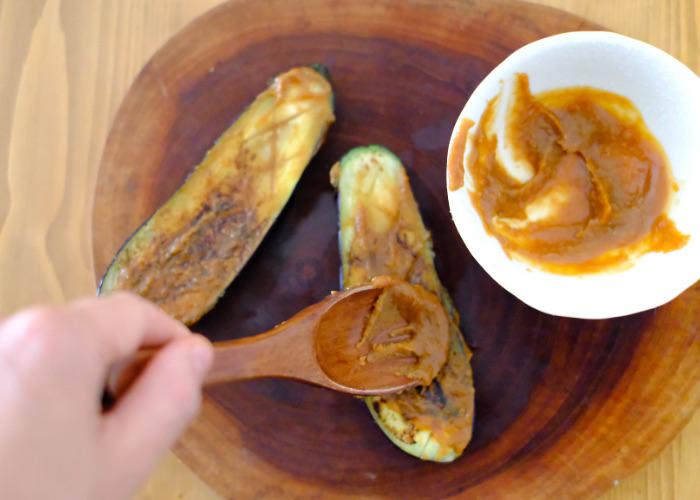 Soak the cut eggplant in water to remove the lye and set it aside.

While they are soaking prepare the miso sauce. In a pan mix all the ingredients of the sauce (Miso, sugar, sake, mirin) and cook over medium-low heat. When the mixture begins to boil, turn off the heat and continue stirring with a spoon for 3 to 4 minutes, making sure it does not stick to the bottom. Set aside and let cool.

Take the eggplant and remove excess water with kitchen paper. Cover the surface with potato starch being careful not to overdo it as we only need a light coating on the outside.

Heat the sesame oil in a frying pan and cook the eggplant for 3 minutes per side.

Once cooked (they should be tender), place them on kitchen paper to wipe off excess oil and coat them with the miso sauce.

Sprinkle some sesame seeds and enjoy your miso Nasu recipe while still warm! 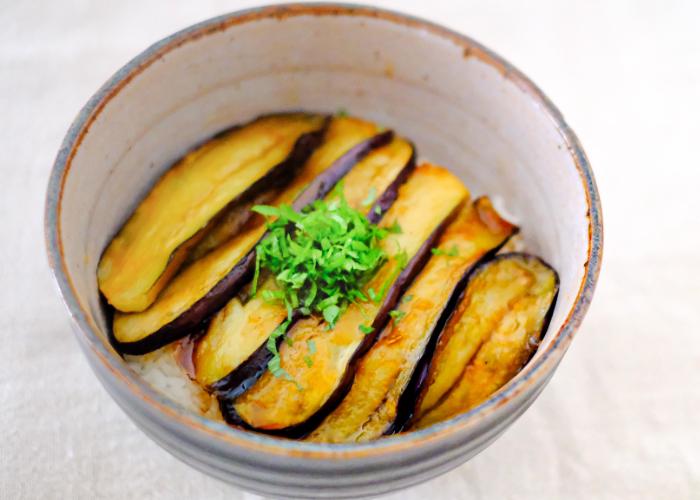 Nasu donburi is perhaps one of the few vegan donburi available on the menus of izakaya here in Japan (but I suggest you ask for confirmation before ordering it). What characterizes this dish is the strong umami flavor and creamy texture of the eggplant, which blankets the delicate rice bowl, and the garnish of shredded shiso leaves that gives a final fresh touch to the dish. Absolutely a Japanese eggplant recipe that you must try!

Remove the top part from the Japanese eggplant, and cut them into slices of more or less 1 cm in width (try to make them all similar sizes). 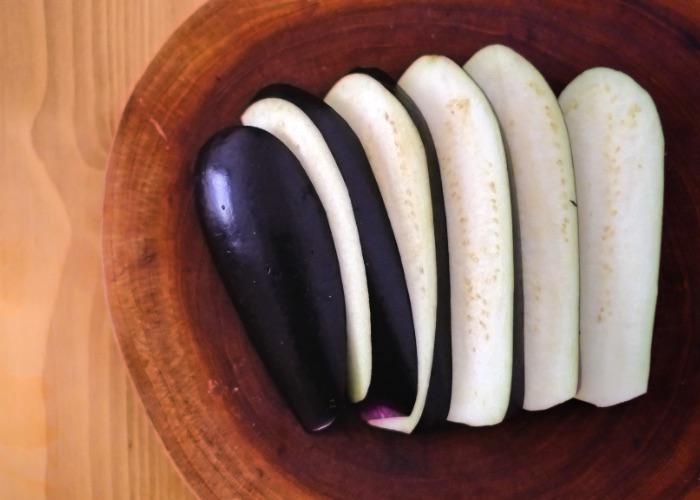 Soak the cut eggplant in water to remove the lye. In the meantime, prepare the seasoning. In a bowl mix sake, mirin, sugar, soy sauce, and ginger. Mix well and set aside.

Take the eggplant and wipe off the water with kitchen paper. Sprinkle the surfaces with potato starch, taking care not to put too much on, as we just need a thin layer.

Pour the cooking oil into a frying pan, heat it over medium heat, add the eggplant and cook on both sides for 3-4 minutes each.

Add the seasoning to the pan and cook for 2-3 more minutes and then turn off the heat after the seasoning starts to bubble. The sauce will get thicker and will be absorbed by the eggplant fast, so take care not to burn it.

While still warm, put the eggplant on top of rice and enjoy your nasu donburi with shiso leaves and white sesame on the top as a final touch. 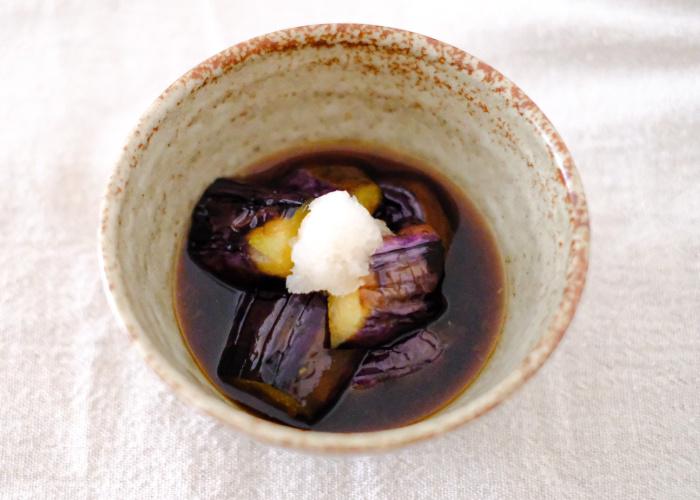 Don't let the term stew scare you. This simple Japanese eggplant recipe can be eaten either hot or cold, and the longer the eggplants are allowed to simmer in the fridge in contact with the dashi broth, the more intense and flavorful they will be!

Remove the top of the eggplant and cut it first in half vertically and then into three equal parts. Make diagonal cuts and soak in water. 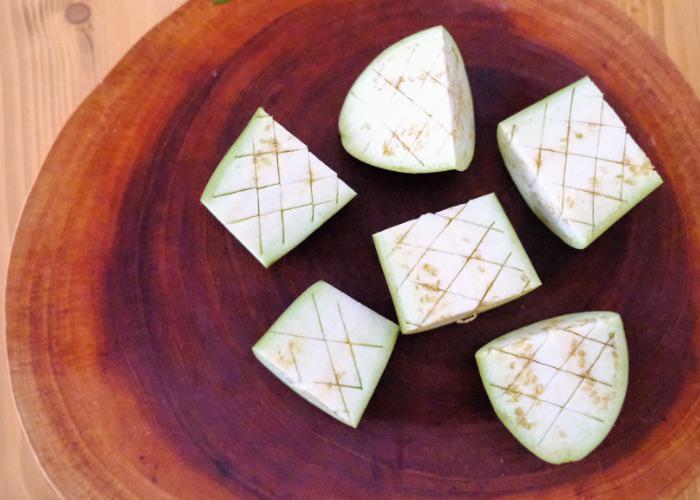 Meanwhile, add all the seasonings to a bowl (dashi, ginger, mirin, and soy sauce) and mix well. Take the eggplant and wipe off the water with kitchen paper.

Place oil in a frying pan and cook beginning with the skin on medium heat. When it turns slightly brown, cook the other side the same way (it will take 2-3 minutes per side). Add the dressing to the pan and let it sit on low heat for a few minutes, until you will observe that the eggplant has absorbed some of the broth. Serve on a plate and top with spring onion or grated daikon.

With these popular Japanese eggplant recipes under your belt, you're well under your way to mastering Japanese home cooking. Join a cooking class in Japan for more in-depth recipes and expert guidance from Japanese cooking teachers! 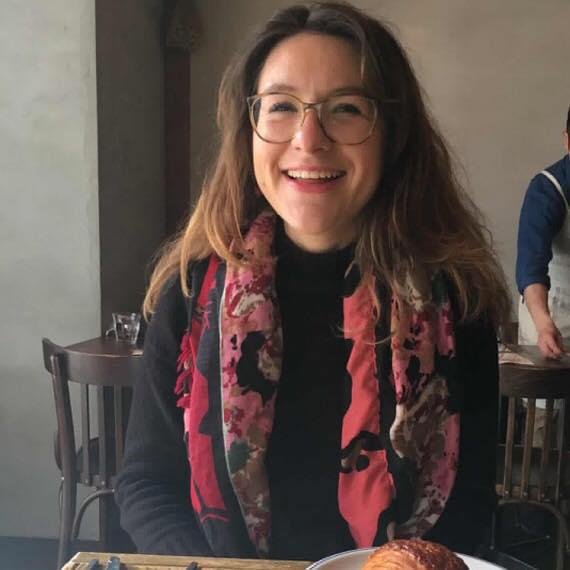 Eleonora Badellino
Born and raised in Italy, Eleonora has been a food enthusiast and nature lover since she was a child. After graduating from "Gastronomic Sciences" university and work experience abroad in the food industry, she arrived in Japan intrigued by the culinary culture of Washoku. Destiny made her meet her husband here, and now they live together in the Japanese countryside, with their newborn baby.
You may also be interested in