Traditional Japanese food, known as washoku, is one of the most diverse and fascinating world cuisines. This seasonally-sensitive cuisine, developed over centuries behind the closed doors of this formerly isolationist nation, is now celebrated on the global gourmet scene for its inventiveness, healthiness, and heritage.

But do you know about the sheer variety of traditional Japanese foods available in the country itself? Once you scratch the surface of authentic Japanese food, you’ll find that there’s a wealth of dishes to discover that you might never have heard of before.

Here is our list of the 20 Japanese traditional foods you must try in Japan: 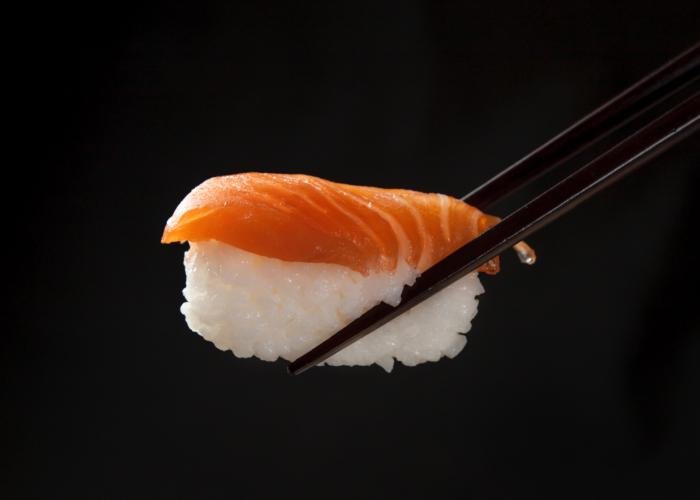 The quintessential Japanese food; in its homeland the craft of sushi is taken to religious extremes, with elite chefs training for decades and going to insane lengths to create the perfect (usually very expensive) bite. It wasn’t always such an elite craft. Japanese sushi has its roots in the street food culture of medieval Tokyo, with pieces of nigiri (a rectangular bed of vinegar-seasoned rice topped with a slice of raw fish) served up from stalls and eaten by hand.

Of all the types of fish on the menu, fatty tuna is the gold standard. These melt-in-your-mouth fish are so coveted that the first giant maguro (bluefin tuna) of the year from Toyosu Market sold for almost $1.8 million in 2020! You read correctly — one point eight million USD. 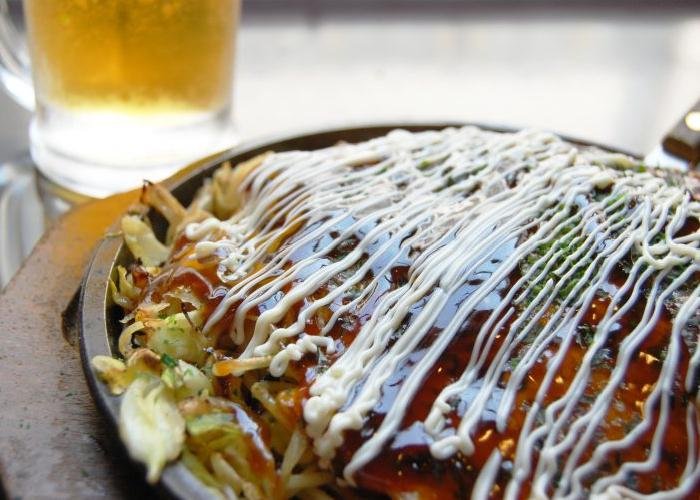 The Japanese will often tell you that this griddle-fried dish is a “Japanese savory pancake,” or something along those lines, but that doesn’t quite fully describe it. Okonomiyaki is made from an egg-and-flour batter mixed with cabbage and fried. Other ingredients can also be added according to regional recipes and your personal taste (in fact, okonomi literally translates to "preference"). These can include pork belly, kimchi, various vegetables, and usually a topping of dried bonito fish flakes, mayonnaise, and special okonomiyaki sauce. 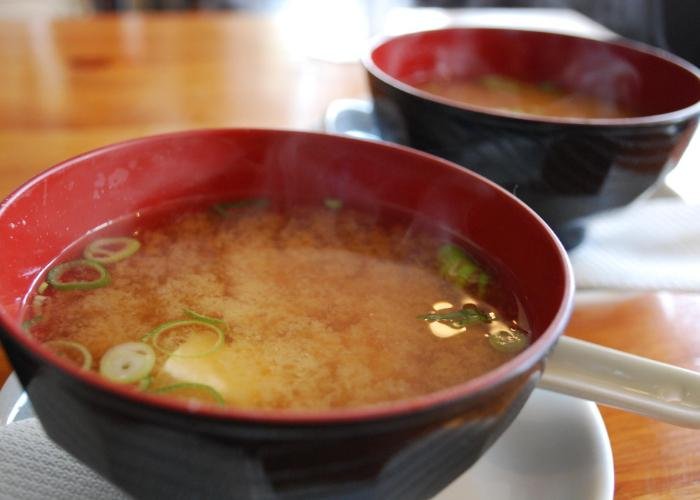 A firm staple in the Japanese diet, you can find this thin soup on the menu for breakfast, lunch, and dinner. Miso soup is made from dashi stock and miso: a salty-tasting paste made from fermented soybeans and rice koji. There are four main categories of miso — white, red, blended, and barley — and dozens of regional varieties, each of which produces a distinctive soup. 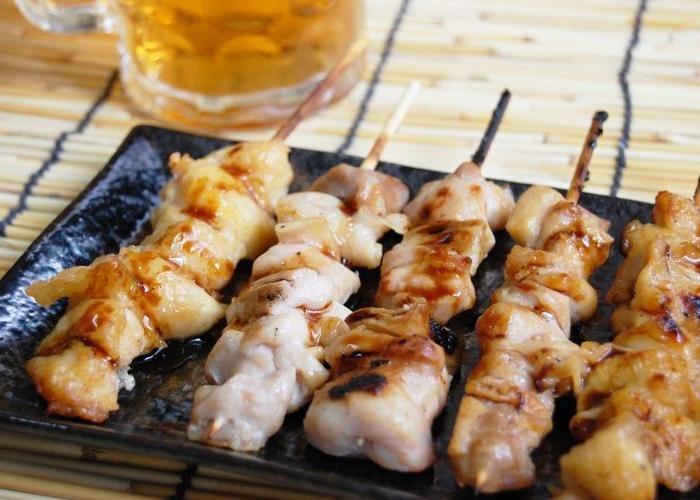 These reasonably-priced grilled chicken skewers are a favorite among after-work diners looking for a cheap and relaxed meal with a few beers. Step inside a yakitori restaurant and you’ll be met with the heat of burning charcoals, with chefs busy fanning away at them and arranging skewers with pretty much every piece of the chicken imaginable; from the breast and thigh to the heart, gizzard, and cartilage! 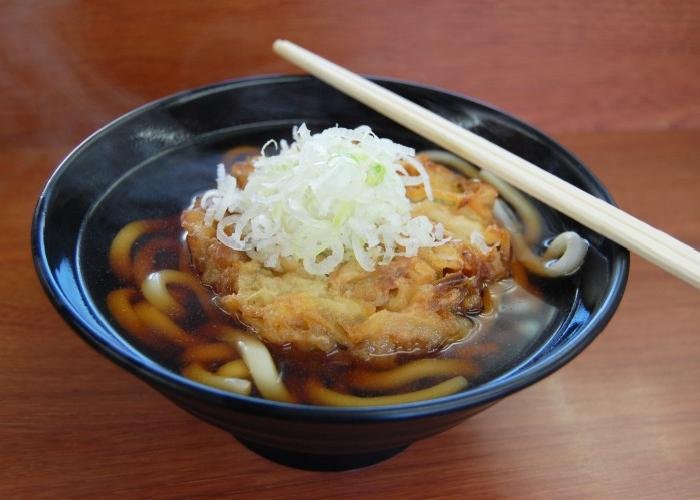 These thick wheat-flour noodles are thought to have been introduced to Japan from China around 800 years ago. Nowadays, udon is a hearty and inexpensive lunch option, usually boiled then served with a simple broth. Kake udon features those two ingredients alone, and although it might look basic, it actually makes for a very hearty meal by itself. If you want a bit more bite, udon shops usually offer a wide range of toppings such as raw egg, tempura bits, and spring onion.

These octopus-filled wheat batter balls hail from Osaka, where they were invented by a street vendor in the 1930s. The distinctive takoyaki ball shape is achieved by using a specialized pan with half-sphere indents across its surface. Flipping the batter at the right time to get the perfect ball shape takes some skill. If you think flipping pancakes is tough, try doing it two dozen times in a row — with chopsticks! The traditional style of takoyaki is topped with dried bonito flakes, dried seaweed flakes, and a special takoyaki sauce. 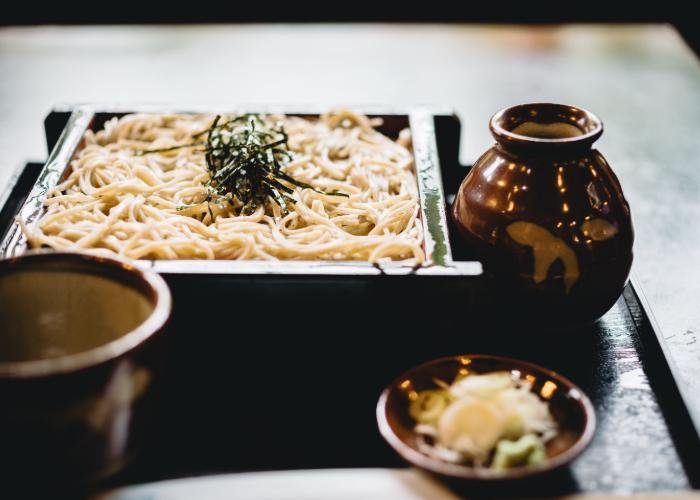 This is without a doubt one of the oldest dishes on the list, thought to have been first made in China over 6000 years ago. However, these buckwheat noodles were only popularized in Japan during the Edo period. Much more healthy and nutritious than many of the other noodle varieties, it was found that eating soba could prevent nutritional deficiencies. 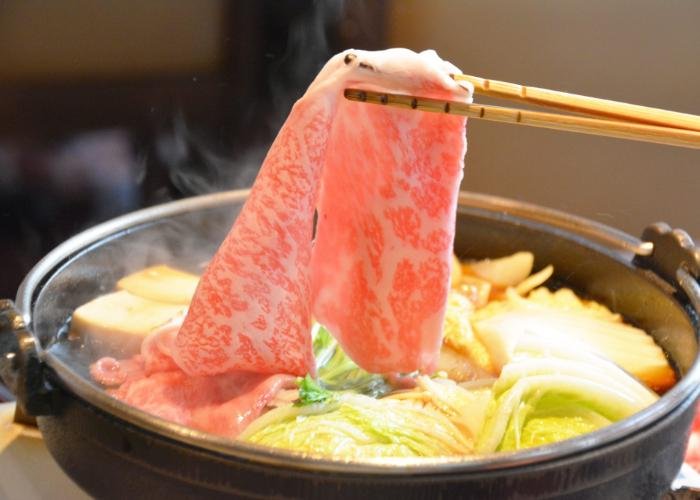 This Japanese hot pot dish is perfect for social dining, with raw beef, noodles, and vegetables cooked at your table in a shallow iron pot of boiling broth made from soy sauce, sugar, and a type of rice wine for cooking called mirin. The thin strips of beef are usually dipped in raw, beaten egg after cooking.

It was invented during the Edo period, but failed to fully catch on due to strict Buddhist restrictions around meat consumption, meaning beef could only be eaten on special occasions or if you were recovering from illness. These restrictions were eventually lifted, but sukiyaki maintained its status as a treat dish for celebrations, popular for end-of-year parties among coworkers and families. 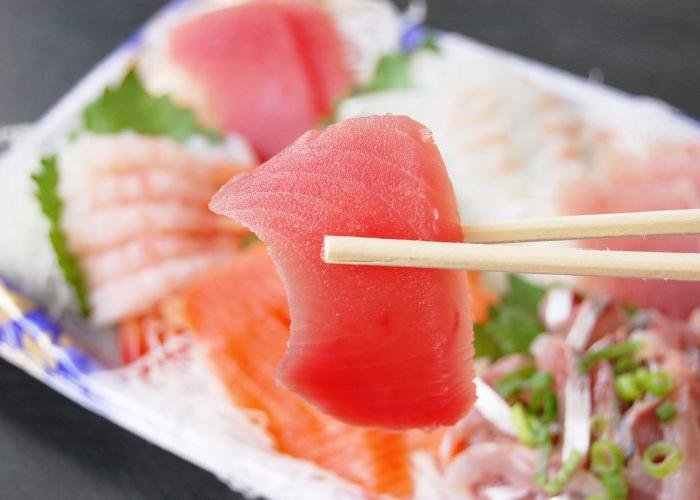 Some of the more obnoxious Japanophiles will delight in pointing out the technical difference between sushi and sashimi if you fall into the trap of assuming they’re the same thing. Don’t let that intimidate you! Basically, sashimi is sushi without the rice. You’ll usually find it as a dish in fancy set-course meals, or an appetizer at izakaya gastropubs. 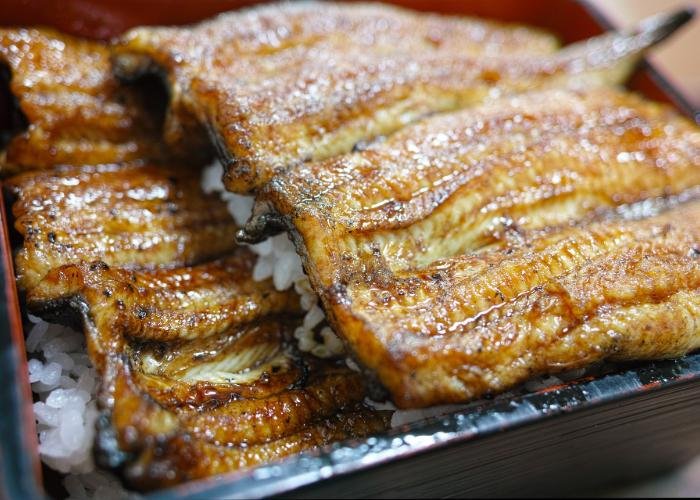 From the early 17th century onwards, unagi was an inexpensive and common meal among the people of Japan due to the abundance of eel in the rivers and streams. Its status as a delicacy nowadays can be blamed on Japan’s insatiable appetite for this delicious fish, traditionally eaten grilled and coated with sweet and salty tare sauce. Unagi is said to give energy and vitality, so it has long been eaten on the Day of the Ox as a remedy for midsummer fatigue, and as an aphrodisiac for men.

The history of this soybean curd ingredient, now a popular vegan staple, stretches back to ancient China. It’s said to have been discovered by a Chinese chef who accidentally curdled his soy milk with seaweed. There are many different types of tofu eaten across Asia, from thin noodle-like strips to huge yellow sheets, but the most common types in Japan are the white block varieties; mainly the firmly-pressed momen (literally meaning "cotton"), the unpressed and incredibly smooth kinu (meaning "silk"), and yuba ("hot water leaf"): thin sheets of skin formed on top of boiled soy milk.

The savior of many a famished salaryman, these rice balls (the Japanese equivalent of a sandwich) can be found on the shelves of every convenience store — far and away the most convenient choice for a meal on the go. This has been the case as far back as 2000 years ago when laborers and fishermen carried pressed rice balls around in their packs. The current form of onigiri can be traced back to the Edo period when the edible seaweed wrapping was introduced. Inside, you’ll usually find salty fish fillings, pickled plum, or more modern additions like teriyaki chicken. See our Beginner's Guide to Common Onigiri Fillings for more classic and adventurous flavors. 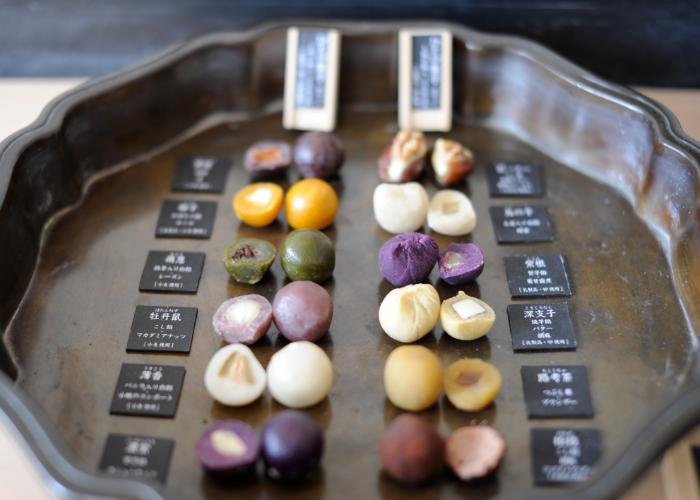 These traditional sweets are the jewels of Japanese food culture. The wagashi category is incredibly broad, basically referring to all regional, seasonal, and commonplace traditional Japanese sweets. Starting off in ancient times as very basic creations of mochi (a sticky dough made from steamed and crushed rice) that were filled with nuts, these sweets evolved into ornate delicacies made to accompany the traditional matcha green tea ceremonies of the Edo period. 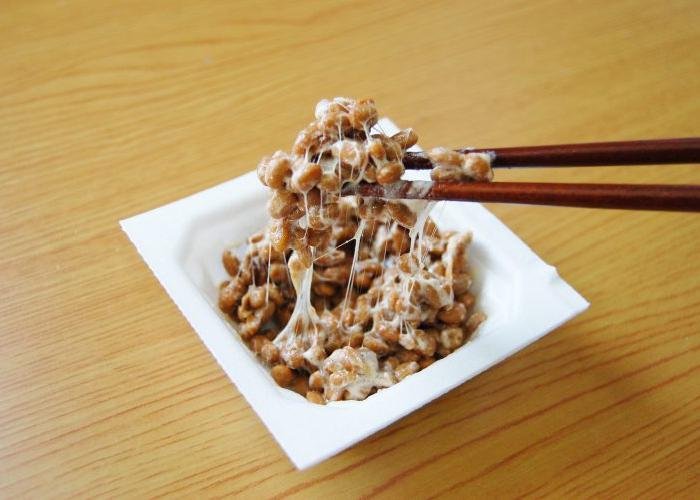 Legend has it that this divisive dish was invented by accident in the 11th century when the samurai Minamoto no Yoshiie left cooked soybeans in a straw bag on his horse’s back which had fermented by the time he got around to eating them. Many people would say he just should’ve thrown them away.

Natto is the Japanese equivalent of marmite — you’ll either love it or hate it. Despite its pungent smell, natto is a popular breakfast food. It’s also incredibly healthy due to the effect the bacteria has on the boiled soybeans, said to benefit heart health, digestive health, and bone strength. 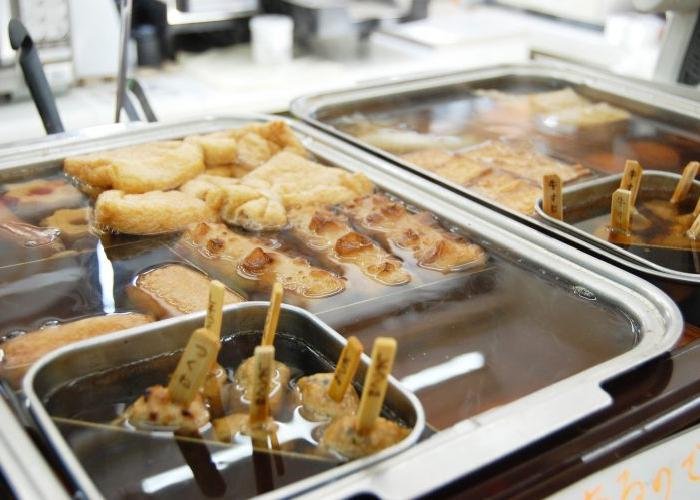 This popular winter comfort food started out in the Muromachi period as a stewed tofu dish. Nowadays, other ingredients are added to the bone-warming oden broth, such as fish cakes, potatoes, boiled eggs, daikon radish, and other assorted vegetables. They’re usually simmered for several hours to infuse the ingredients with the flavor fully. The rich-yet-mild broth itself typically consists of dried bonito (skipjack tuna) flakes and dried kombu (kelp). 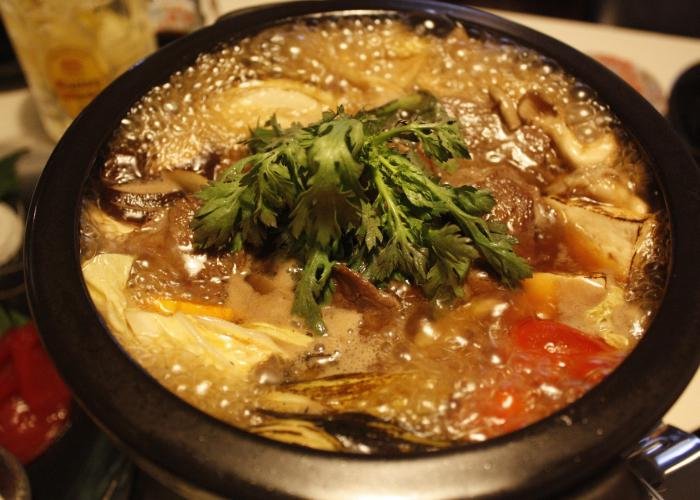 This is far and away the most modern dish on the list, invented in 1952 at a restaurant in Osaka. You’d be forgiven for mistaking it for sukiyaki. After all, both are hot pot dishes in which you cook thinly-cut beef strips alongside vegetables.

There are a few key differences though. Shabu shabu is cooked in a deeper pot with a milder and more savory broth. It’s also common practice to only partially cook the meat in a shabu shabu hot pot, and raw egg isn’t used as a dipping sauce. 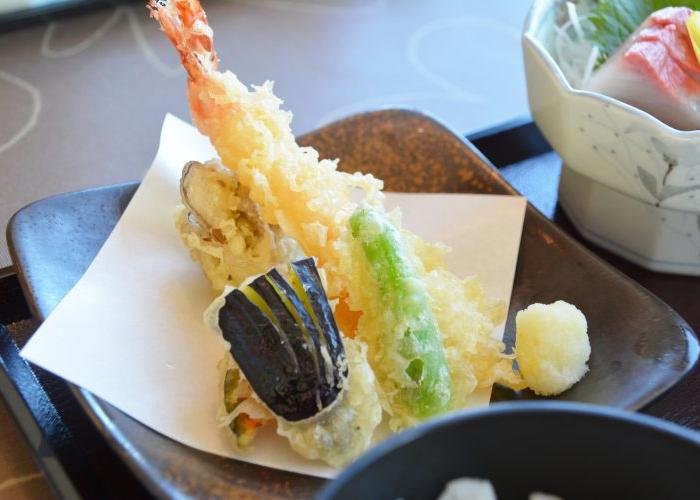 One of the pillars of Japanese cuisine, tempura consists of pieces of fish and vegetables coated in a light egg and flour batter then deep-fried. The technique actually found its way to Japan via Portuguese traders who were permitted to do business with the country in the 1500s. In fact, the name even comes from the Latin tempora — a word related to the Christian fasting weeks of Lent. It quickly caught on in Japan, becoming the favorite food of the first Edo shogun, Tokugawa Ieyasu. 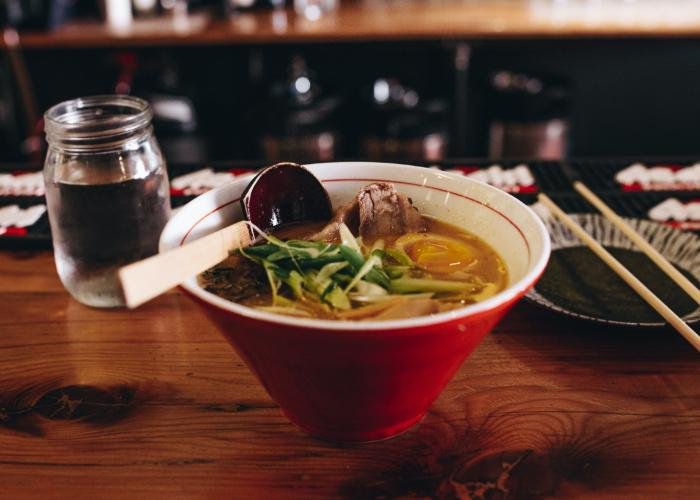 The premise for ramen is deceptively simple: soup stock, flavorings, seasonings, wheat noodles, and toppings (usually fatty pork and vegetables such as bamboo shoots). However, within this simple formula there’s massive room for interpretation.

You’ll find instant ramen packets in supermarkets worldwide, but if you’re really serious about trying this dish, head along to any of the ten-thousand-plus local eateries across Japan that prepare it with fresh noodles, rich broths (miso, salt, soy, and tonkotsu being the main types), and generous helpings of toppings. 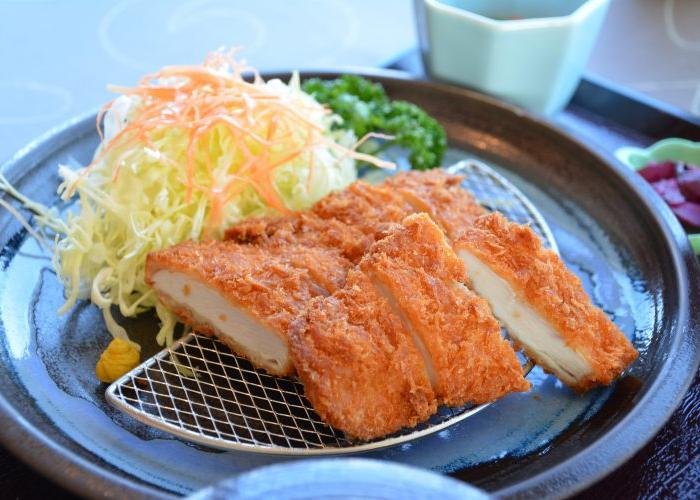 As with many of the things we consider to be quintessentially Japanese, that’s only half the story of this breaded pork cutlet dish. Tonkatsu was invented at a Tokyo restaurant called Rengatei in 1899, served with rice and shredded cabbage. It was originally considered a Western-style dish due to the use of pork, which the Japanese rarely ate. On top of that, the Japanese curry sauce added to make the popular katsu curry was introduced to Japan by the British via India. 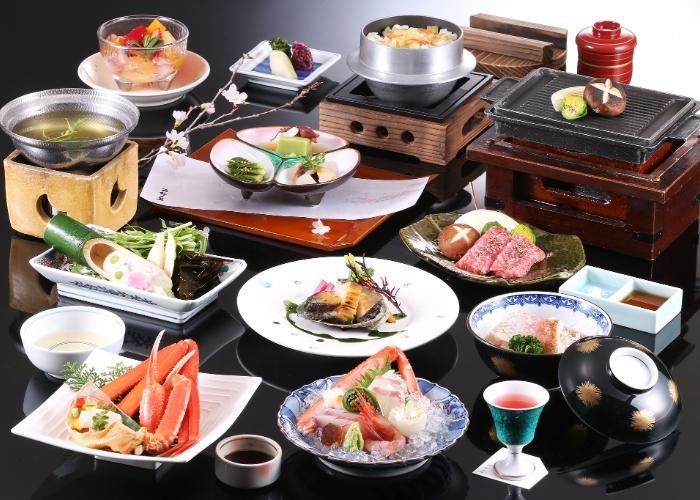 A type of cuisine, rather than a food, this style of fine-dining has its roots in the courtly culture of imperial Kyoto in the 16th century, when visiting samurai and dignitaries were treated to a series of small dishes to accompany traditional tea ceremonies. Today, anywhere from around 12 to 20 dishes feature in a typical kaiseki meal, with the exact offerings varying according to the season, the chef’s expertise, and how strictly they adhere to orthodoxy.

You could spend a decade touring Japan and never fully discover the nation’s cuisine, but the twenty Japanese traditional foods mentioned above are a good starting point. Try them all and you’re sure to discover a new favorite!

Feeling hungry? Browse food experiences across Japan and book your next food adventure.

We strive to be as accurate as possible and keep up with the changing landscape of Japan’s food and travel industries. If you spot any inaccuracies, please send a report.
0
Click clap if you like this post
Callum Howe
Originally from Fife, Scotland, Callum is a literature graduate, freelance writer, and English teacher living in Tokyo. An interest in Zen drew him to Japan, so you can often find him visiting temples around Tokyo and beyond. He loves getting involved with the local music, sports, and arts scenes.
SEE ALL POSTS
You may also be interested in
Culture