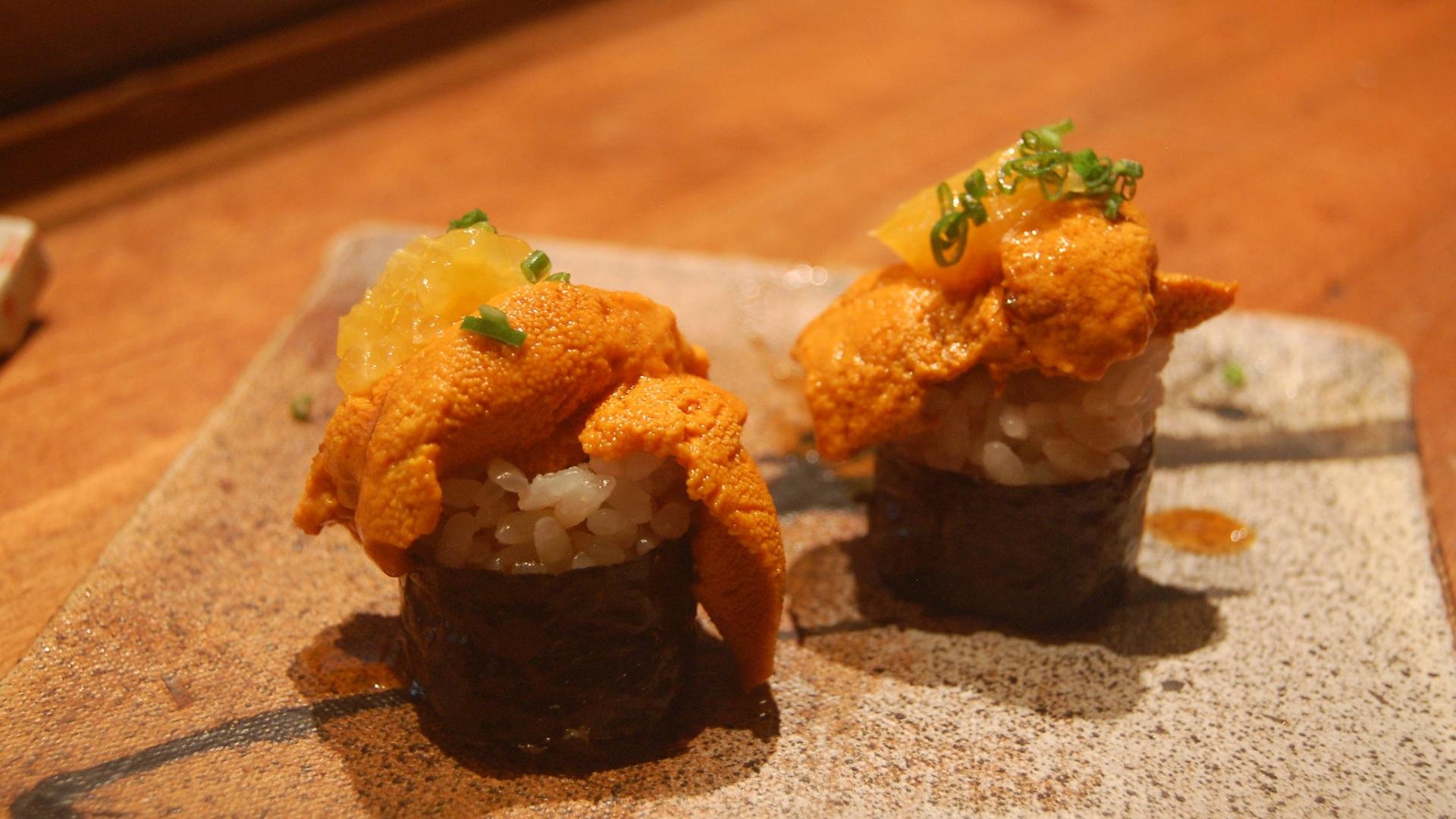 Types of Sushi Fish and Seafood: A Beginner's Guide

American sushi often bears little resemblance to the native product and, with a few exceptions, the more popular items in Japan are different than stateside. The purpose of this article is to help people who are new to Japanese sushi become more familiar with the varieties of fish served in Japan, so they can feel comfortable walking into a sushi restaurant in Japan.

Here are some types of sushi fish (and cephalopods and mollusks) that you are likely to encounter in Japan. Should you try them? Read on… 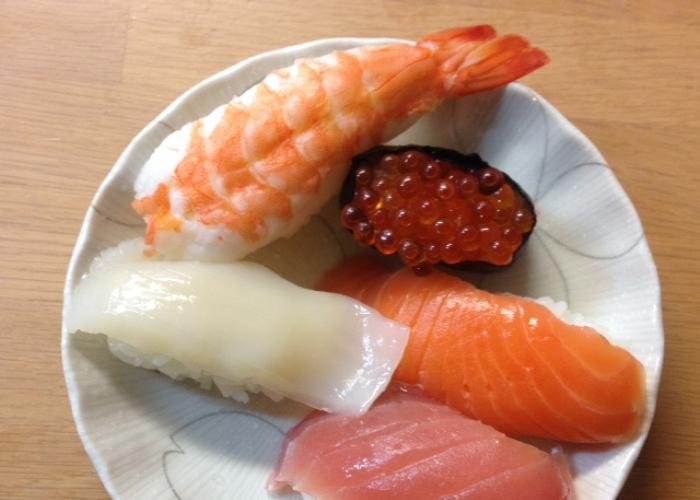 Chiba-based sushi chain Kyotaru (a subsidiary of Yoshinoya Holdings, which also owns the eponymous beef-bowl chain), conducts an annual survey of its customers to find their favorite sushi toppings (called neta). Note that their list does not include makizushi (sushi rolls) or inarizushi (with the sushi rice in a sweet bean curd pouch), but does seem to sneak in a few gunkan style items (a “battleship” – wrapped in nori seaweed which, standing on end, resembles something like a boat). Otherwise, it’s all nigiri sushi (formed sushi rice called shari topped with seafood).

I’ll use their list of the most popular 15 items as a starter, but my list will be by types of sushi fish, rather than by neta item.

By the way, this is from their 2020 list, as they suspended it in 2021 due to COVID-19. The most noticeable point here is that salmon and bluefin tuna supply seven out of the 15 neta items on their list. These two types of sushi fish annually battle for the top spot. Salmon is generally more popular with women and children, who like its soft texture and slightly sweet flavor, while tuna (lean akami or medium fatty chutoro) is top with men.

I’m getting ahead of myself—first, here is a list of the different types of sushi fish I’ll be presenting:

That’s because the salmon roe comes from a different species than the salmon meat. Still salmon, but I’m going into detail here. 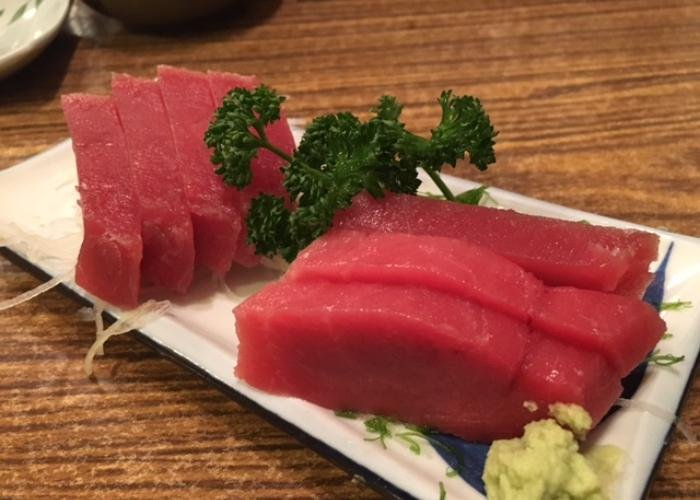 Pacific Bluefin tuna is mostly caught in the Northern Pacific ocean. You may have heard that it is endangered and that you shouldn’t eat it. This is partially true. The Southern bluefin tuna is listed on the International Union for Conservation of Nature (IUCN) Red List as “critically endangered,” and the Atlantic Bluefin is listed as “endangered”—though, oddly, the sustainable fishing certification scheme Marine Stewardship Council (MSC) certified an Atlantic bluefin tuna fishery as sustainable in 2020.

The Pacific bluefin, which is the most likely to appear on the plate in Japan is not in quite such dire straits, being listed as merely “vulnerable.” So, you can take solace in that thought as you chomp away.

If you’re still worried about it, you could visit the Kinki Daigaku Suisan Kenkyujo restaurant in the Grand Front building in Umeda, Osaka where they serve closed-cycle farm-raised bluefin. That is, it was bred and raised in captivity and not taken from the wild. Quite an accomplishment, but still making up a very small part of the bluefin supply in Japan.

Types of tuna sushi made from this species, Thunnus orientalis, include: 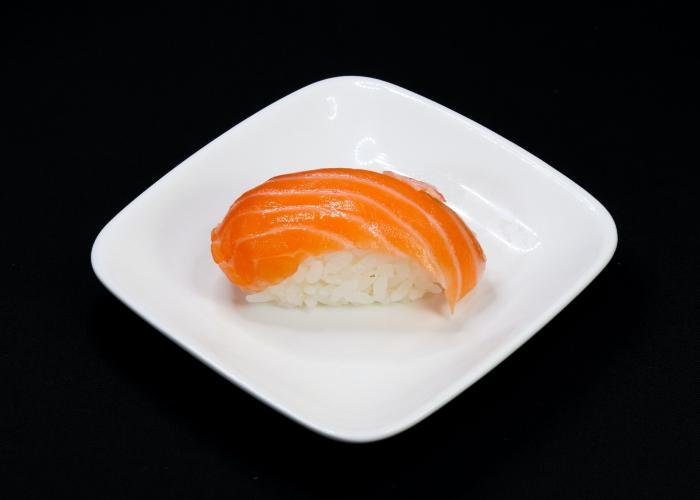 Atlantic salmon dominates the sushi market. “Why not use the wild Pacific coho salmon native to Japanese waters?”, I hear you say—well, that’s because they can carry the parasite anisakis. As a result, salmon was not among the types of fish used in sushi traditionally. It was introduced in 1995 by a Norwegian who showed that fish that only eat feed produced in controlled conditions and guaranteed free of the parasite can be eaten raw with no problems. So don’t worry.

Items made of salmon meat include simply “salmon” and the fattier salmon “harasu” (salmon belly)—basically the salmon equivalent of otoro. There are some other salmon variations, such as salmon with basil and cheese, or lightly braised salmon. All are good. 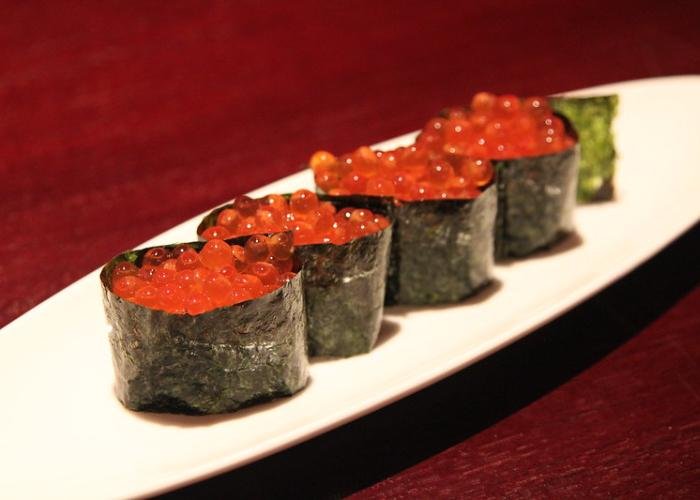 Chum salmon is not a common fish for sushi, but the roe (eggs) sold as ikura are popular. I don’t imagine that the roe from one kind of salmon tastes much different from that of another, but chum is the most plentiful type of salmon and so I suppose the supply is large. Alaska supplies salmon roe, but much of Japan’s supply comes from Russia’s Far East.

Personally, I’m not a fan, due to a childhood experience. I went fishing using a jar of salmon eggs as bait and left the jar in my tackle box for year—where it leaked and rotted and stank. After discovering and smelling this, I acquired a dislike of salmon roe. But don’t let me ruin it for you. Some people like the little explosions in their mouths as the eggs burst. 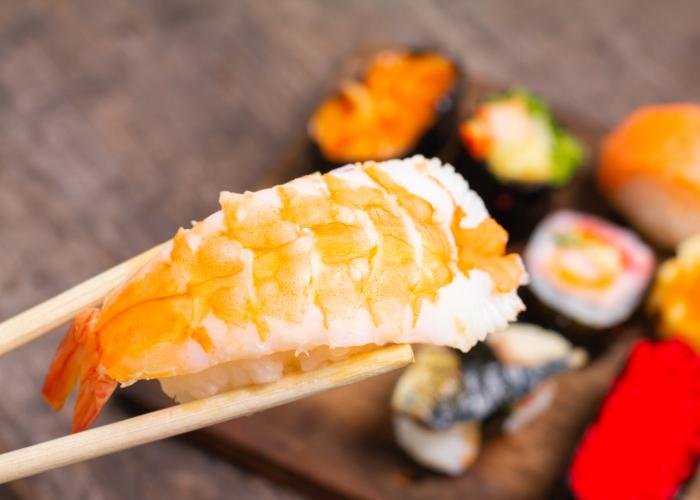 Black tiger prawns are being largely supplanted in the cooked shrimp segment by their faster-growing but slightly less flavorful cousin, the vannamei or “whiteleg” shrimp. But they still hold their own in the sushi shop. This is a cooked item, so it is suitable—along with egg—for those who do not actually like raw seafood. The version with sliced onion, mayo, and avocado is tasty. Most shrimp in Japan is farmed and imported from Indonesia, India, Vietnam, or Thailand.

Cuttlefish is similar to squid but stockier and it has a raspy “cuttlebone,” which was once a popular item for removing callouses on ladies’ feet. (Note that the cuttlebone is not served with the sushi.) However, in Japan, both squid and cuttlefish can be called “ika.” This particular one is “mongo-ika.” It is served raw and is a bit chewy. If fresh, it is sweet, but if old, it has more the consistency of a rubber eraser. Thus, it is a pretty good test of the sushi shop’s freshness.

Yellowtail is one of the most common fish for sushi. You will see it called “hamachi” at the sushi shop, but what is hamachi?

This issue is confusing because there are two similar species. Hamachi is Seriola quinqueradiata, but a species called “kampachi” (Seriola dumerili) is also farmed in Hawaii and Mexico and may be marketed as “yellowtail” in the US, and what the Japanese call “hiramasa” (Seriola lalandi) is farmed in Australia and may be called “yellowtail” there. Oh my—what a confusion! Don’t worry—they’re all delicious, if a little different.

Generally, kampachi has a springier texture compared to the buttery texture of hamachi, and hiramasa is in-between in texture, but with a cleaner, less oily taste than hamachi.

Oh, I nearly forgot to make it more confusing. Because the Japanese use different names for the fish as it grows (think veal and beef), a young yellowtail could be called a tsubasu while an older one would be sold as buri. Confusingly, buri will be sold in the sushi shop as hamachi, which can also be a name for a young yellowtail in the Kansai region around Osaka (bigger than a tsubasu, but smaller than a mejiro or buri).

In the Kanto region around Tokyo, there is a whole ‘nother set of names which I hope you will forgive me for not bringing into the mix right now. 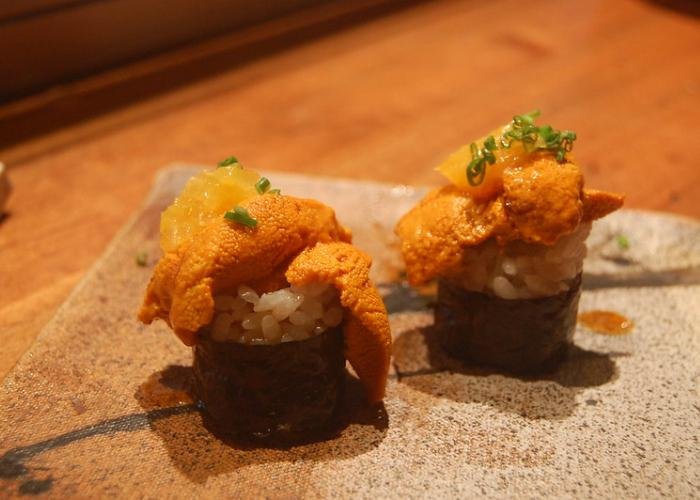 Sea urchin roe fresh from Hokkaido is sweet with a firm and not watery or mushy texture. If served less than fresh, it becomes bitter. Much of the product sold in Japan is airfreighted from Chile. I won’t insult this product—but really, try it in Hokkaido if you have a chance. You needn’t feel guilty about eating too many of these critters. They are a prickly pest that overgrazes kelp beds. A venture for feeding underweight sea urchins onshore and selling them for their roe—urchin ranching—is being trialed in Japan by Urchinomics. 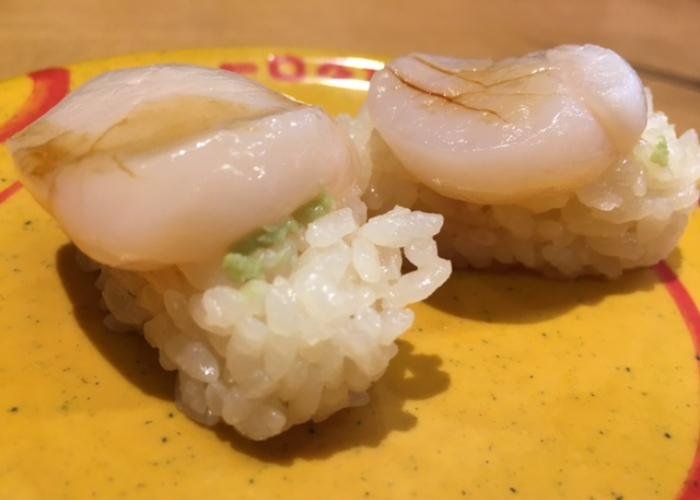 Yesso scallop is farmed in Mutsu Bay in Aomori. I had the opportunity to eat one right off the boat at the port of Hachinohe and still remember the sweetness of the meat with the slight saltiness of seawater. You likely won’t get it that fresh, but it is a local Japanese product likely to be good wherever you buy it in Japan. Scallop actually flash freezes well with little effect, so it’s a pretty safe bet in any season. 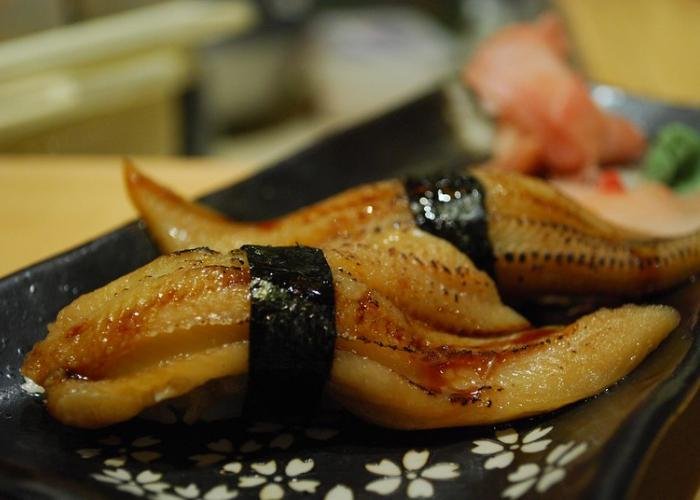 Conger eel (or anago) is somewhat bland compared to its richer cousin the river eel (unagi) but it doesn’t overwhelm the shari (the rice portion of nigiri) and, cooked with a light sauce, still has a taste that contrasts nicely with the plainer raw fish offerings.

Olive flounder is mostly eaten cooked, and only one part of this fish makes this list of sushi fish—the engawa (edge of flounder’s tail fin). This is often cited by sushi aficionados as the favorite item for people who really know sushi. The unwashed masses declare bluefin otoro to be best, but to impress those in the know, order this instead. It is good, but in a subtle way that takes a little discernment to appreciate. 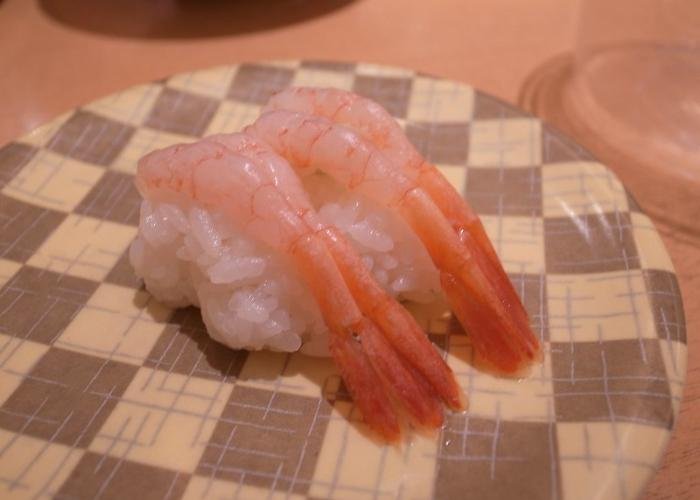 Sweet shrimp (ama-ebi) is another gunkan item, usually served with a bit of mayonnaise. Different from the farmed shrimp listed earlier, this is a small wild shrimp. I visited a factory in Oregon where the same kind of shrimp is processed. There, they are run through a series of gentler rollers that cause the shells to fall off and are then boiled for use in shrimp cocktails. In Japan, they are eaten raw, and as the name implies, they are sweeter that way.

Pro tip when deciding on a sushi restaurant:

So there you have the mainstays of the Japanese sushi shop.

One last tip—I have been informed by those in the know that eating at cheap kaitenzushi (conveyor belt sushi restaurants) is a good deal, and that eating very good sushi at a very expensive sushi shop is a worthwhile experience, but that the restaurants that fall somewhere in between are not a good deal—the sushi being not much better than the kaiten and the improved décor not worth the inflated cost. Go high or go low, but don’t aim for the middle.

Want to take a virtual trip to Japan? Check out these online cooking classes and food experiences or subscribe to the Japan by Food YouTube channel! 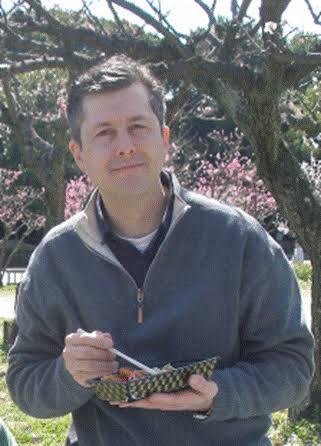 Chris Loew
Chris Loew reports from Osaka, where he has lived for 20 years. He writes about food, Japanese companies, and marine policy issues. He previously worked for two years in the purchasing department of a Japanese meat importer, and for five years as export director for two Seattle food companies, selling to customers in the Far East. He has co-authored two college-level language texts. When not writing, he proofreads Japanese-to-English translations.
You may also be interested in