Japanese people, as a general rule, put a lot of stock in lucky charms, omens, wishes, and prayers. Most do not describe themselves as strongly religious. In fact, less than 40 percent are members of an organized religion, according to a 2008 NHK survey of religion in Japan. Yet, they enjoy and honor ancient customs and traditions. This applies very much to osechi ryori (osechi-ryōri), Japanese New Year food, as the New Year is a time when tradition is felt strongly. If asked whether they really expect these activities to bring them luck, a common reply is, “At any rate, it won’t hurt.”

Osechi ryori is Japanese New Year's food, an array of colorful dishes often served in a special multi-tiered lacquerware box. The custom began in the Heian period (794-1185). Fires were not to be used in the first few days of the year, except to heat ozoni (the Japanese New Year mochi soup made with a dashi-based broth and mochi rice cakes), so foods were prepared in advance.

Originally, osechi ryori was limited to preserved pickles and nimono, foods simmered in soy sauce and dashi. Gradually, additional items were added and now the jubako (lacquerware box) is filled with an assortment of colorful dishes ranging from sweet rolled omelette to fishcakes to sweet black soybeans.

While there is some flexibility recently in what goes into the boxes—with Chinese food (sweet and sour pork and shrimp in chili sauce), roast beef, or lobsters creeping in—the basic components of typical New Year's food in Japan are fixed. One reason for the endurance of traditional Japanese New Year dishes is that these foods have auspicious names or appearances, boding well for the coming year.

Osechi Ryori Foods and Their Meanings

Here, we list eight lucky foods that you can be pretty sure to see during the New Year holiday in Japan—six of these special dishes appear in the box, and two outside, but auspicious just the same. Indeed, it would hardly seem like Oshogatsu (Japanese New Year) without these traditional Japanese New Year foods. 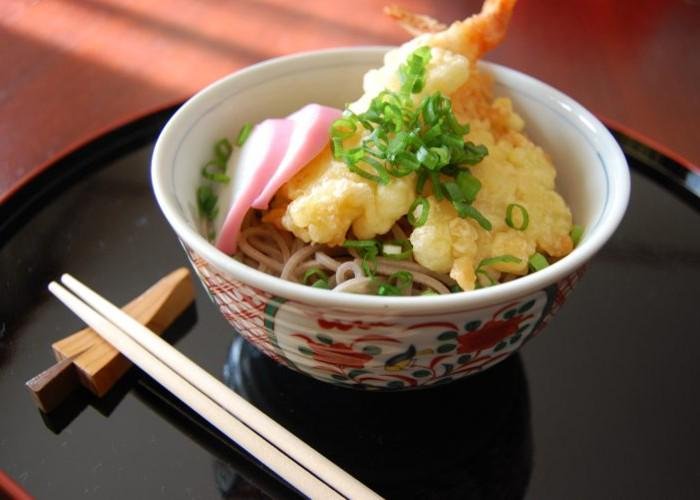 Toshikoshi soba is a New Year’s Eve food tradition. It is buckwheat noodle soup, and the long noodles symbolize a wish for long life. The soba is usually served topped with prawn tempura or a teriyaki-flavored herring, along with chopped green onions. It’s a simple dinner, but between preparing the dishes for the next day and taking a bath to symbolically purify the body, everyone is pretty busy.

Later will come an evening of TV, switching back and forth between the “Red and White Song Battle” and Japanese comedy at its best: a show where comedians try not to laugh at a series of elaborate pranks, on pain of a spanking. Then, Beethoven’s Ninth and the ringing of temple bells at midnight. After toasting the New Year, get some sleep—the family will gather in the morning for a special breakfast: Japanese sake, ozoni (Japanese New Year mochi soup), grilled sea bream, and some stacked up lacquered boxes, called jubako, containing the osechi ryori.

Now if you’re lucky, you have a family matriarch who will have managed most of the Japanese New Year food arrangements for the next day. My mother-in-law is making less and buying more pre-made as she gets on in age, but she still gets all of the essential items. 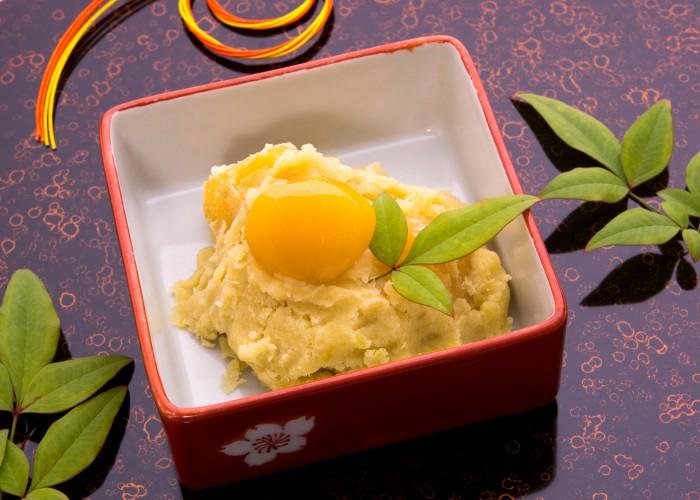 Kuri-kinton preparation is assigned by said matriarch to my better half. It is sweet chestnuts in smashed boiled sweet potatoes—the smashing is delegated to me. The golden yellow of the dish represents the promise of wealth. It hasn’t worked for me, but I probably didn’t eat enough. I’ll have to double-down on this osechi ryori dish. 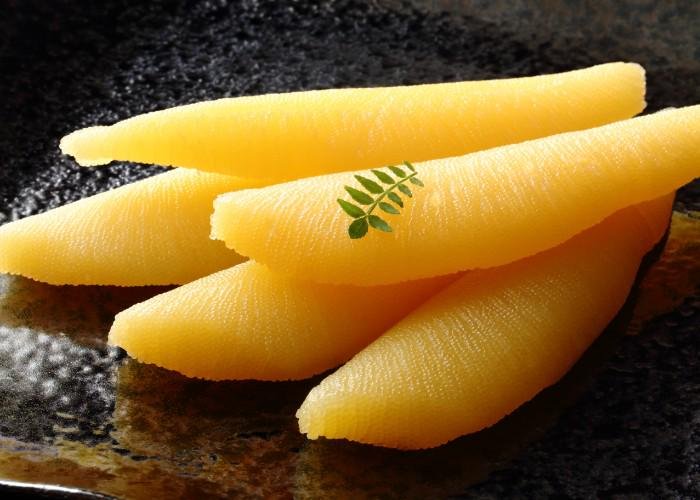 Kazunoko are tiny crunchy yellow herring eggs, usually imported from the United States. The eggs stick together in the shape of the roe sack. They are marinated in dashi stock, sake, and soy sauce, and topped with dried bonito shavings. Since each roe sack contains about 20,000 eggs, kazunoko symbolizes having many children. Ladies of Japan, eat more kazunoko—the birthrate is falling! 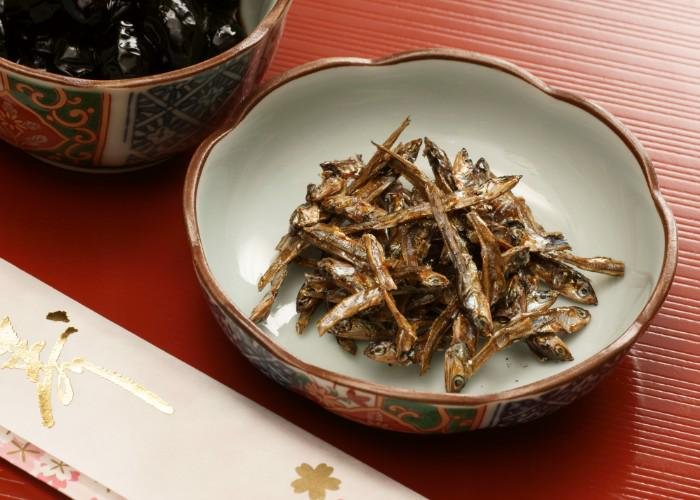 Gomame are small sardines that have been dried and then finished in a sweet sauce of sugar, mirin, soy sauce and sake. They are sweet and crispy and are eaten with the heads on. The word “gomame” can mean “50,000 ears of rice,” so this Japanese New Year food symbolizes a bountiful harvest. 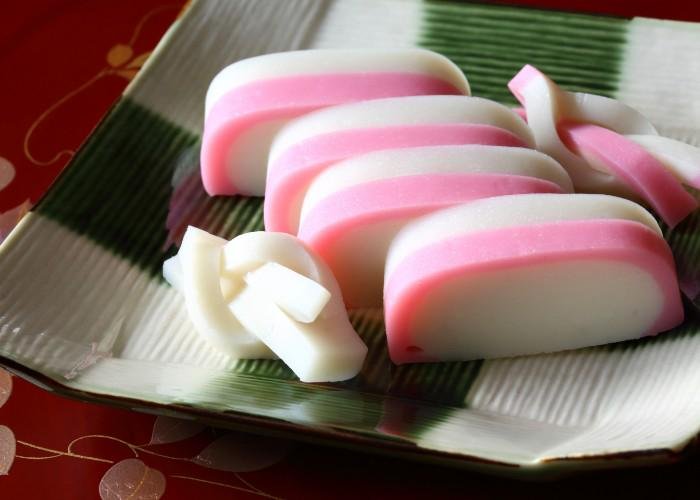 Kamaboko is broiled fishcake. Its cheerful red and white colors represent the rising sun, the auspicious symbol of Japan. The semicircular shape of kamaboko fish cake supposedly symbolizes the first sunrise of the new year. 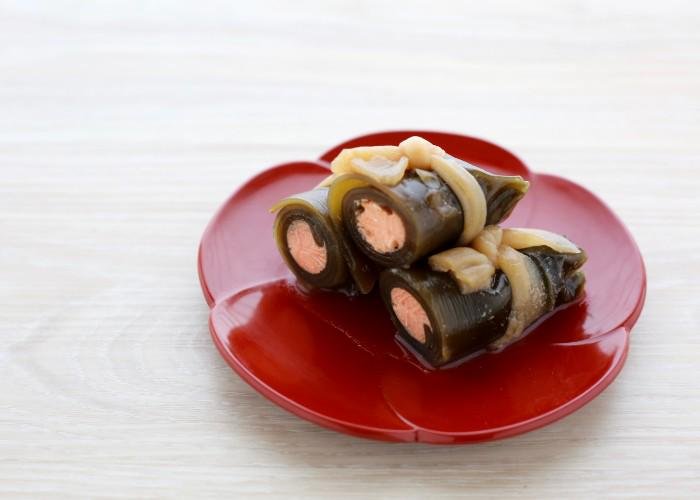 Kombumaki is kombu (kelp) rolled tightly and bound with a ribbon of kampyo (a gourd strip). These are often stuffed with salmon or herring. They are slowly steeped in dashi, mirin, sugar, and soy sauce. Kombu can also be pronounced as “kobu” for a play on the word “yorokobu,” which means happiness. 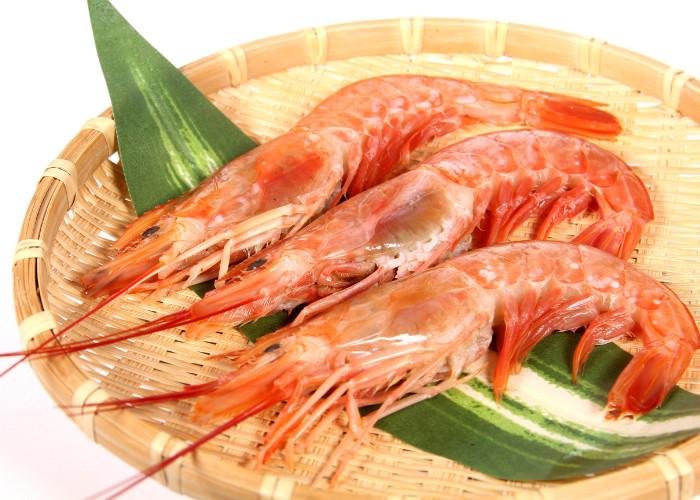 Boiled ebi (prawns) with shell, head, and antennae on, represent long life. The curved body and long antennae remind us of the stooped back and long whiskers of an old man. They’re a bit messy to peel, and your lilliputian plate will be half occupied with the shells, so I recommend saving these for the end. 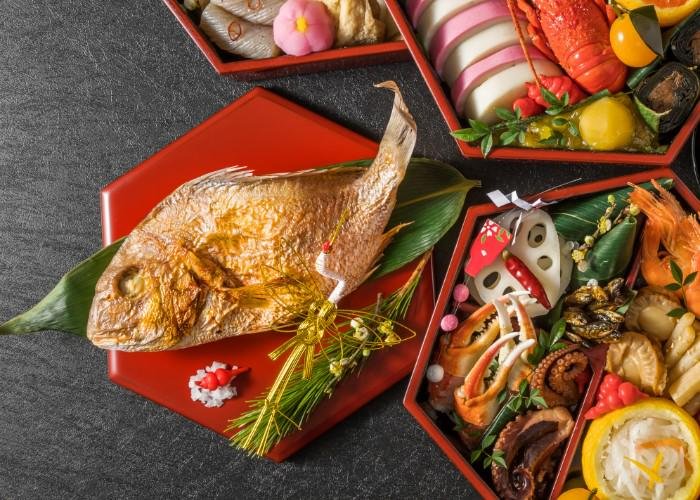 Tai (sea bream), gutted, and grilled whole, is commonly served for celebrations—not only for Oshogatsu, but also to celebrate important birthdays and other events. A centerpiece among the traditional Japanese New Year foods, it is displayed separately from the boxes containing the osechi ryori. The name can be included in the phrase “omedetai,” which can mean “I want to congratulate you,” or “congratulatory sea-bream.” For the full lucky effect, staring at the sea bream for a bit before consuming it is recommended. By the way, this fish is not a “red snapper,” though it looks similar. You won’t get much luck from a snapper, so don’t be fooled.

If you are a visitor to Japan, and are not fortunate enough to snag an invite to a Japanese home on New Year's day, all is not lost. Sets of high-end osechi food are available on the basement floor of department stores or can be ordered online (such as through online shopping portal Rakuten) from expensive traditional restaurants, though many start taking advance orders as early as September. Less extravagant sets can now be found at convenience stores such as 7-Eleven. Prices range from around 10,000 to 30,000 yen for a set of three stacked boxes depending on the ingredients. Many large prawns tend to increase the price. Some go so far as to include lobster tail or sliced abalone, but I recommend you to stick with the most typical and popular Japanese New Year's food to maximize your good fortune.

Of course, I can’t promise you that these foods will bring you wealth, fecundity, longevity, and happiness—but at any rate it won’t hurt.

We strive to be as accurate as possible and keep up with the changing landscape of Japan’s food and travel industries. If you spot any inaccuracies, please send a report.
39
Click clap if you like this post
Chris Loew
Chris Loew reports from Osaka, where he has lived for 20 years. He writes about food, Japanese companies, and marine policy issues. He previously worked for two years in the purchasing department of a Japanese meat importer, and for five years as export director for two Seattle food companies, selling to customers in the Far East. He has co-authored two college-level language texts. When not writing, he proofreads Japanese-to-English translations.
SEE ALL POSTS
You may also be interested in
Tokyo