A Day at Boroichi Market in Setagaya

Do you fancy a visit to a flea market? Moreover, are you an Edo Japan fan who loves Japanese traditional handicrafts and clothes, but also food specialties? Then the Boroichi Market is a must-visit in Tokyo if you are there in mid-December and/or in mid-January! 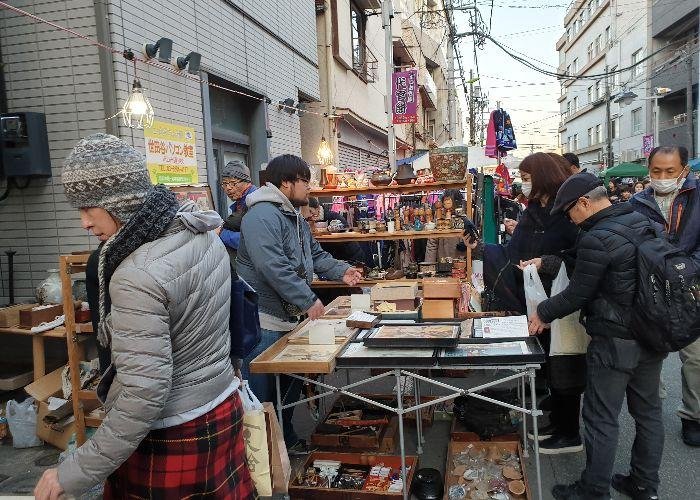 Boroichi Market is one of the oldest flea markets in the wider Tokyo area, with the first dating all the way back to 1578 (that’s 442 years!), though with a different name back then. At its peak, the market had reached 2000 little stalls, each about the size of a door! Later, due to urbanization and other factors of modernization, it was restricted to 700. In spite of its shrinking size, Boroichi Market still attracts 200,000 to 300,000 visitors! Impressive, isn’t it?

In the beginning, the market was specialized in farming tools, daily goods, waraji and zori (farmers’ straw sandals), and of course boro (rag) clothes, thus the name "Boroichi." Both boro clothes and straw sandals were valued by farmers because of their durability.

Since the Meiji era, the Boroichi Market has taken place every year in December and January on the 15th and 16th, though over time the merchants’ stalls have changed significantly, with boro clothes and second hand traditional Japanese clothing like kimono, as well Japanese street food, being the sole survivors of the market’s initially offered products. 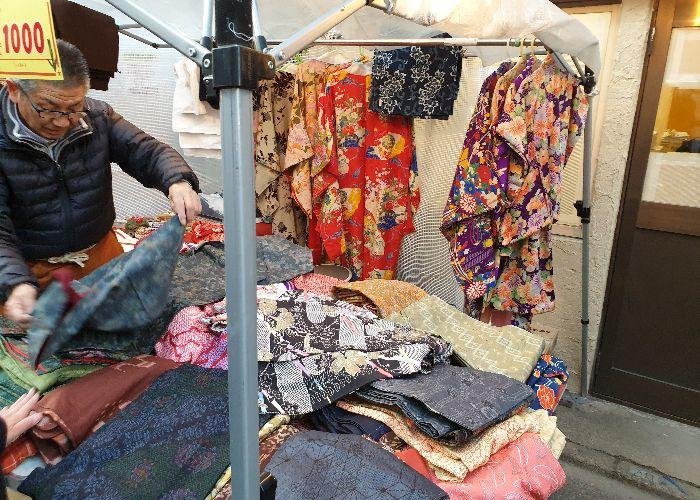 Today, Boroichi Market is filled with antiques, Japanese handicrafts, some second-hand stalls with various objects, toys, accessories, etc. During my visit last December, I stumbled upon the last straw sandal maker and merchant in the whole market, who was even weaving some on the spot!

It was a nice sunny December day, so I took the subway near my home and rode all the way to Shimo-Takaido Station and from there I took the Tokyu-Setagaya Line to Kamimachi Station. For the full Boroichi experience I suggest that you do that! The Tokyu-Setagaya Line uses a tiny train (at least when compared to other trains of the Tokyo subway), which is full of older people who live in the wider Setagaya area. It was quite a fun ride.

When I got down at Kamimachi Station, I directly crossed the southern junction and in less than 150 meters I stumbled upon the colorful and rowdy Boroichi Street, filled with people and market stalls covering every single inch of both sides of the street.

I started walking down the street, full of enthusiasm, taking a look at every stall, big and little alike. In the beginning, the stalls were full of handicrafts, like ceramic teapots and cups, vases, handmade hashi (chopsticks), bowls, etc. There were many clothing stalls to be found, from modern custom-designed indigo clothes to traditional boro clothes, indigo cotton rags sewed together.

Finally, Some Food (That’s what you’re here for, right?)

At some point I started getting hungry, it is then that I came across a stall with little snacks and delicacies. I had delicious, crunchy, and quite salty fried sweet potato (satsumaimo) sticks, something that made me instantly thirsty, so it was good that I had some green tea with me. 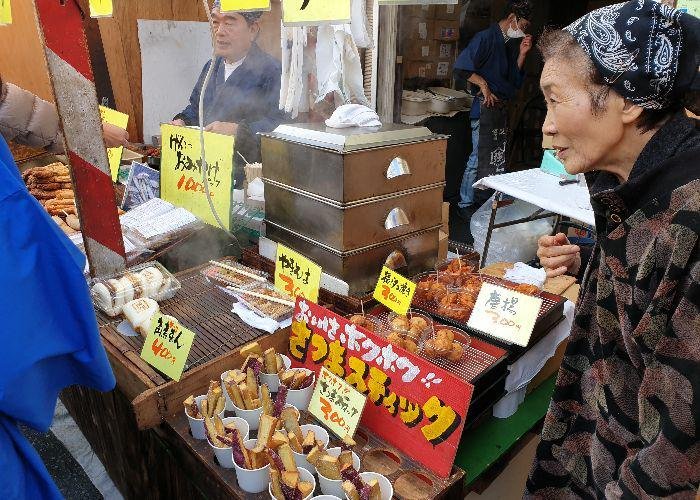 I went on with karaage, deep-fried chicken, really savory! The coating was crispy, but inside was tender and hot, a small mouth-blast. As the last part of my short meal, I had kakuniman, a kind of sandwich with pork ribs cooked in soy sauce and Japanese sake, fatty and salty and tender, laid within a soft chewy rice flour bun. There’s not much more to say if you like meat buns, pork ribs and chashu (seared pork belly, especially used as a ramen topping). Just try it!

After that, I returned to weaving through the different stalls and discovered a bunch of amazing things! Like handmade tiny wooden shrines for homes, sold by an adorable old couple who have been selling their wares for 50 years straight at the Boroichi Market. 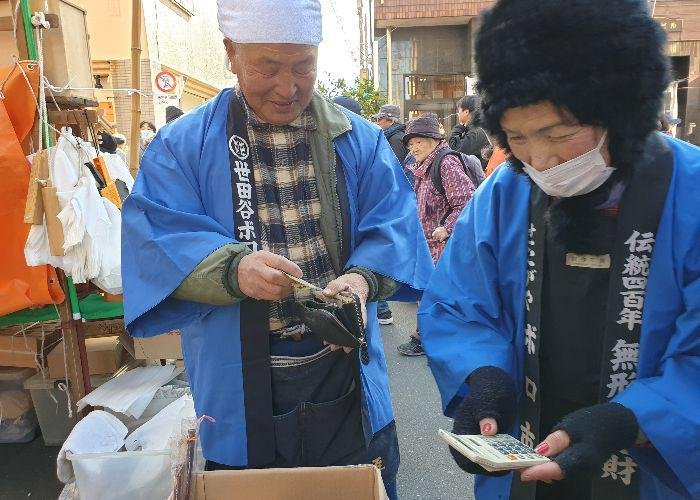 Many beautiful garments and silk kimono were sold at several stalls, some for just 1000 yen each piece! At some point, I met a wonderful lady who has lived in Australia for some time and could speak in English to me. She was selling huge yuzu, locally produced in Chiba. 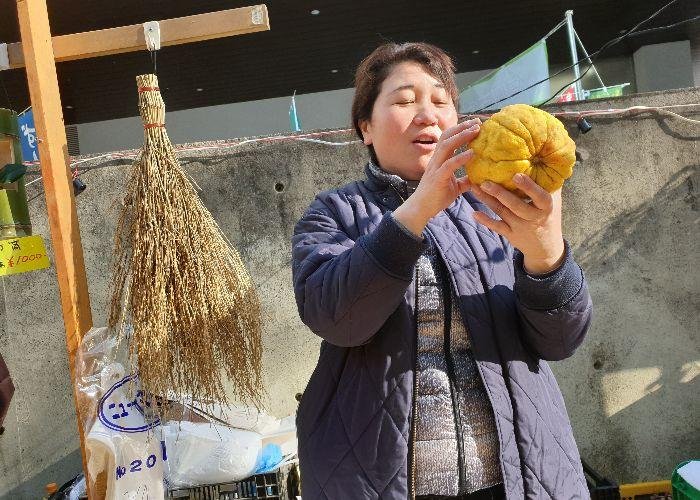 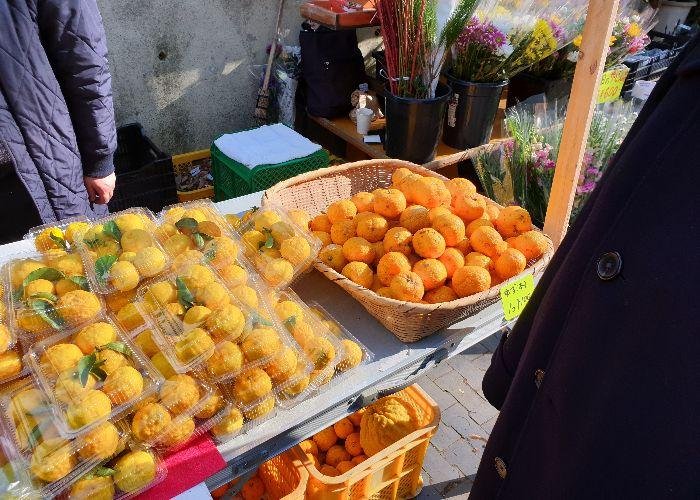 A few steps further ahead, in front of a temple’s main entrance, a sunburned (tanned?) Japanese man from Kansai was selling hot sweet potatoes. 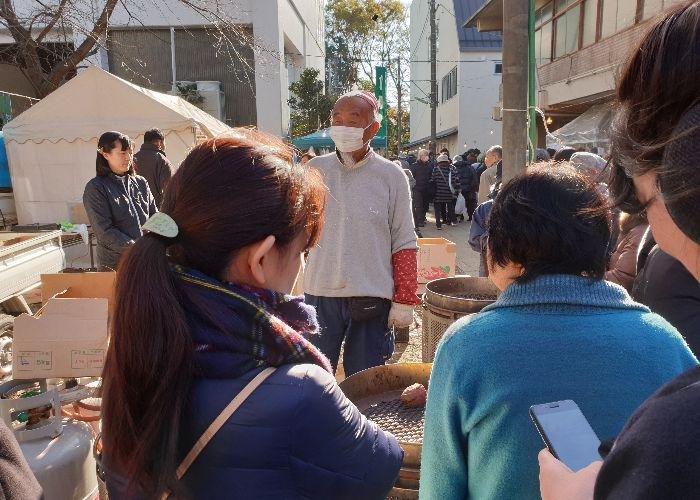 Arriving at the middle of the market I came across the Daikan Yashiki (mansion). 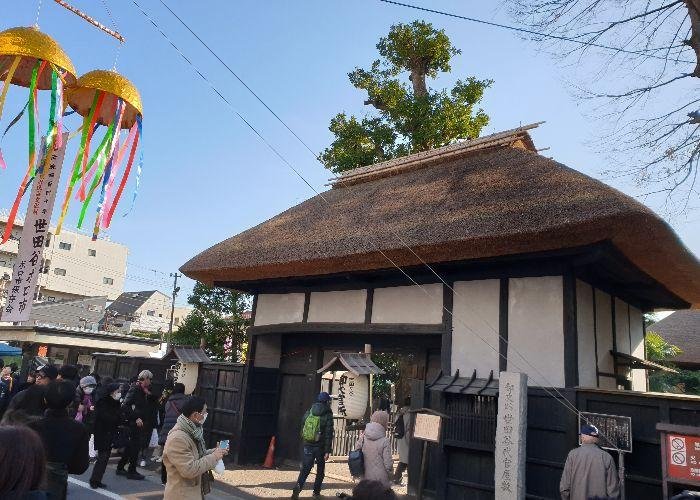 The Oba family was in charge of the wider area and after the Meiji Restoration, the mansion has found several uses and is an open museum today. As long you are around, it is worth the visit, as you can see how people used to live more than 200 years ago! 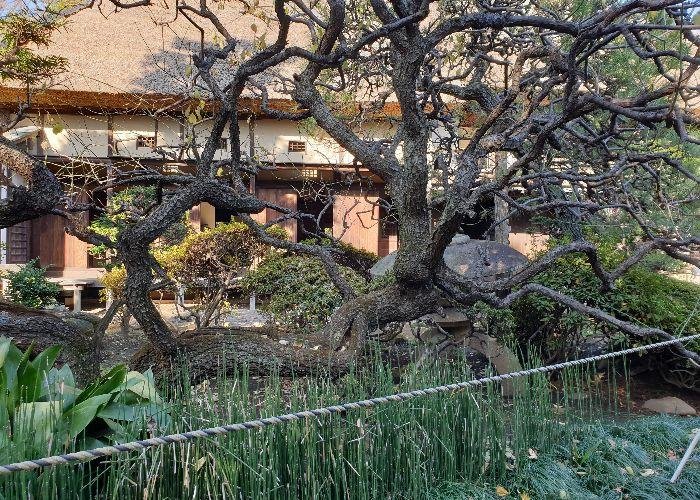 While exiting the mansion’s inner yard, a stunning smell enchanted my nose. It was a churrasco, Brazilian barbeque! Huge pieces of juicy beef with fat, marinated and cooked! Oh my, they were so yummy, just melting in your mouth, slightly stingy because of the salt and with a spicy-sour twist of the pickled mustard seed sauce.

Boroichi Market is for All Ages

Some things that caught my attention were a children’s toy fishing game, as well a stall with walls of Yu-Gi-Oh!, Pokémon and other trading card games. 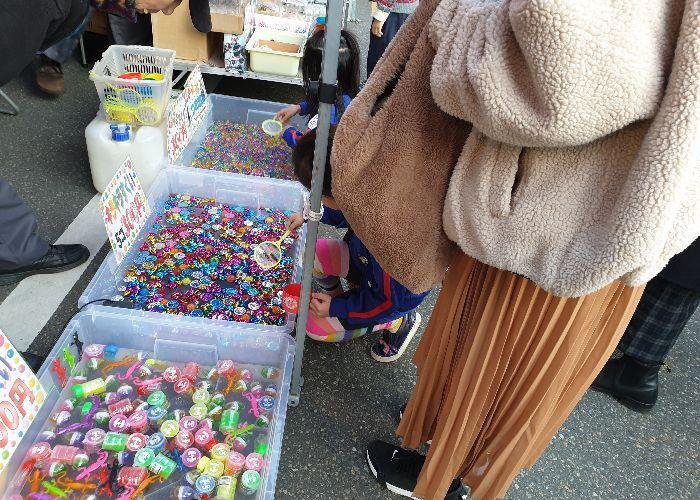 At the end of the main market, I found the last waraji, straw sandal, maker! He was there with his wife, making sandals and other straw goods on the spot while selling those that they already had weaved. 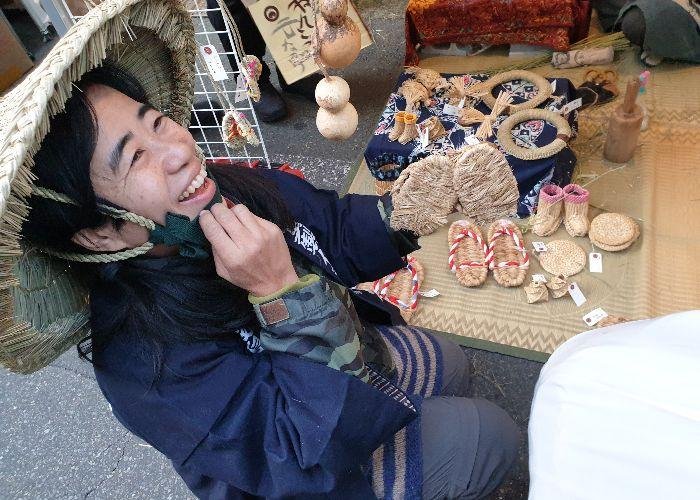 Coming to an End

At last, walking towards the end of the market, even though it seemed endless, I discovered some super cheap vintage film cameras and Showa era books (each one of them was a time machine of its own), and some other second-hand stuff and street food stalls. Probably, the only person still selling farming tools, was also selling second hand DJ equipment with it! 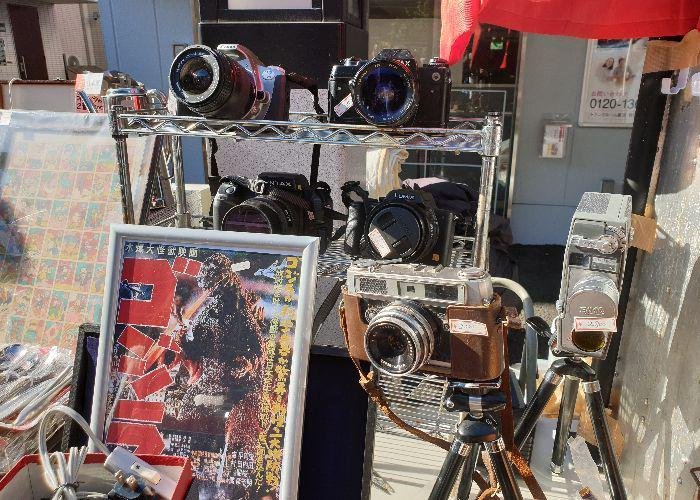 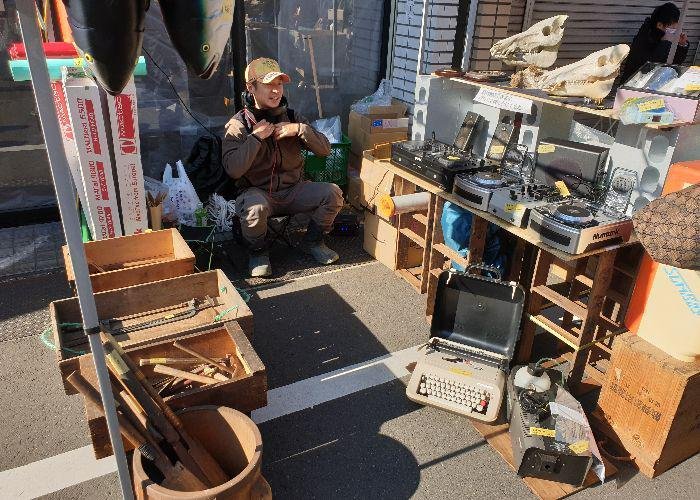 I suggest trying the mini waffle balls across the street next to the bus stop at the eastern entrance of the market, and buying local produced green tea: light, slightly bitter with a grass-like after taste. 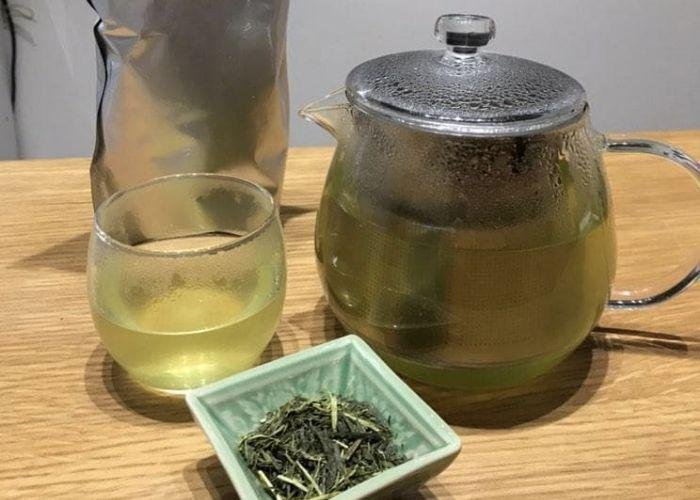 For boro or second-hand clothes of pre-war Japan, wooden toys, ceramics, ornaments, or just a stroll around and some tasty food, the Boroichi Market is an indispensable visit if you are around Tokyo in mid-December or mid-January. Remember to have some Daikan mochi, the specialty rice cake that comes in two flavors and is prepared exclusively for the Boroichi Market.

There are special toilets at designated areas. If you want to use the restroom at any shop, you will have to buy something there first. Even the konbini lock their restrooms during the days that the market is running. There are tables where you can relax as you eat the food from the stalls. And (this goes for all flea markets) make sure to go early to catch a good bargain, though there is plenty for all!

﻿Have a taste for travel? Browse food experiences in Tokyo or check out our YouTube channel.

We strive to be as accurate as possible and keep up with the changing landscape of Japan’s food and travel industries. If you spot any inaccuracies, please send a report.
0
Click clap if you like this post
Georgios Kechagias
Georgios is a modern nomad, changing countries and places when he has had his fill. He's curious about different cultures and experiences, like a 5-year old with a special focus on food. Proof of the latter can be found in the photo.
SEE ALL POSTS
You may also be interested in
Tokyo