Japan is of course a country that is famed for its cuisine. Across the globe, Japanese food is revered for its depth, flavor, and subtlety. Ask anyone from New York to Hong Kong about sushi or ramen and you will no doubt receive an enthusiastic response! However, for many first-time visitors to the country, Japanese drinks remain something of a mystery. Today, we will look at some of the most famous and unique Japanese drinks that are the perfect complement to any meal. 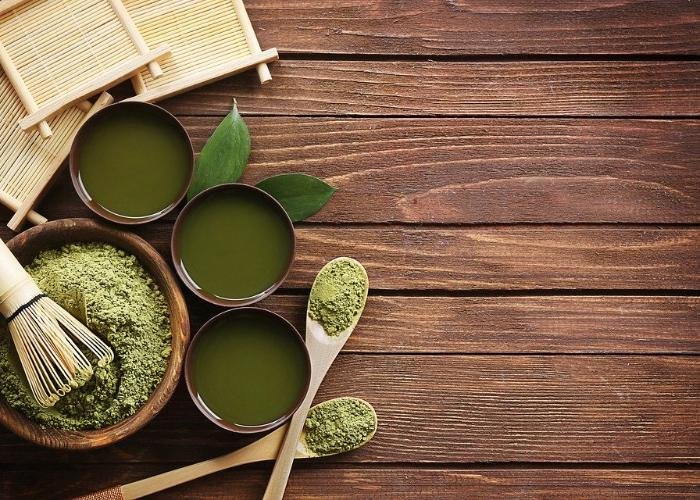 Here is our list of some of the most popular Japanese drinks, organized by non-alcoholic beverages and alcoholic drinks below.

Japan is a country where both the traditional and the modern exist in tandem. This is an aspect of the culture that can also be seen even when we look at what people drink in modern Japan. We start with perhaps the most important and famous Japanese drink of all, the humble green tea.

Green tea first originated in China and legend states that the first green tea seeds were brought to Japan by two Buddhist monks, Saicho and Kukai, in the early 9th century. These seeds were then planted in Uji, near Kyoto, which then became the birthplace of Japanese green tea (specifically Uji matcha) in Japan.

Today, there are about 20 different variations of green tea that exist in Japan. The green tea flavor has also become a symbol of the country and can be found in everything from Kit Kats to soap!

However, nothing truly embodies the importance of green tea to Japanese culture more than the traditional tea ceremony, chado (茶道) or "the way of tea." This ritual with Zen Buddhist origins, which uses the matcha tea variation of green tea, has come to represent Japanese culture to the outside world and is all centered around the presentation and enjoyment of the humble beverage. 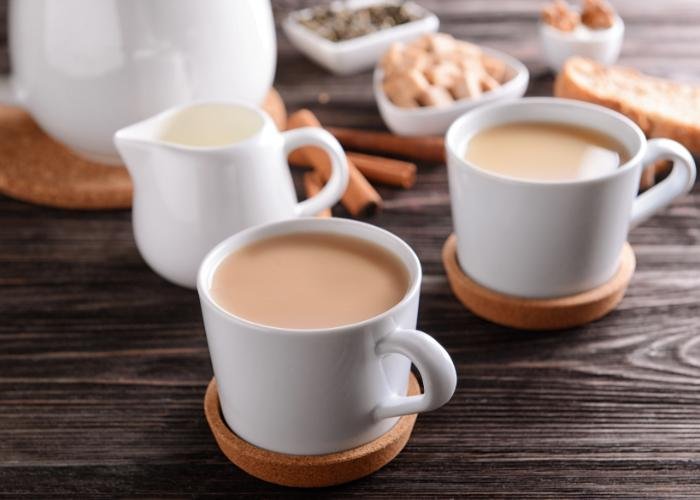 In keeping with the different teas of Japan, another unique drink that is very popular amongst Japanese people is Royal Milk Tea. This blend of "English" tea (black tea, like Assam or Darjeeling) is brewed and then a healthy measure of milk is added. This can then be sweetened with either milk or honey to taste. This is a drink that can be enjoyed either hot or cold and is a year-round favorite. 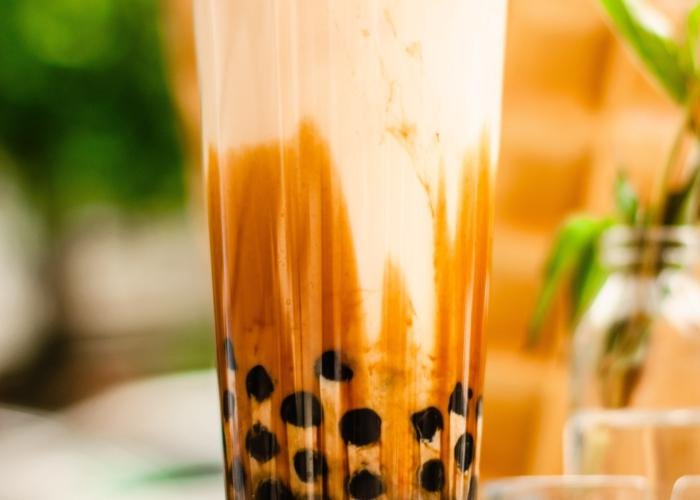 Originally an imported drink from Taiwan, bubble tea has now become a massive hit, particularly amongst the younger generations. In its original incarnation, this tea is milk tea (not dissimilar to Royal Milk Tea) that can be made with black, oolong, or jasmine tea leaves, with added tapioca balls. The tea is usually served sweetened with sugar.

Check out our blog post 6 Bubble Tea Shops in Tokyo to read more about the bubble tea craze in Japan! 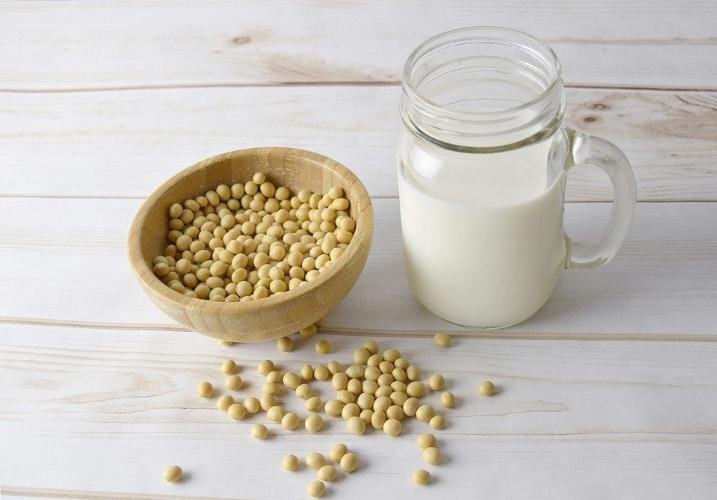 Soy milk, a natural ingredient of tofu that's made by grinding soybeans, has long been an alternative to dairy milk in Japan. It is a beverage that again holds a place of special importance in Japanese cuisine, and is used to make yuba (the skin that forms atop boiled soy milk). It is also used as the base for a special winter stew called tonyu nabe (soy milk hotpot). However, in recent years the popularity of soy milk as a stand-alone beverage has soared with many flavored options such as banana, sakura, and of course matcha! There are even limited-edition flavors such as pudding-flavored soy milk!

Make your own soy milk in our Sustainable Soy Cooking Class! 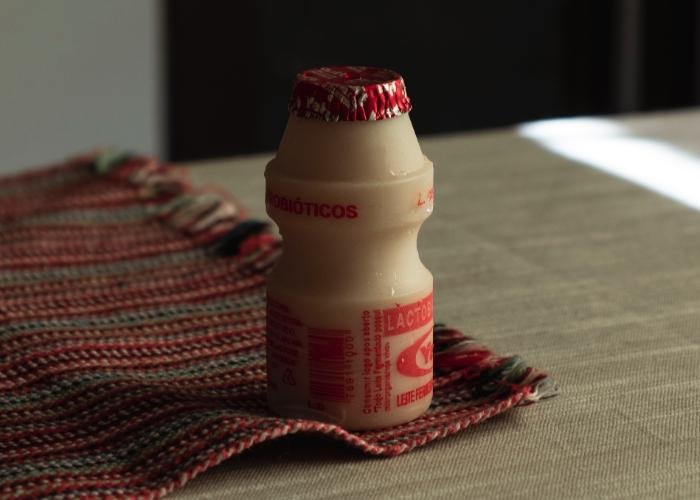 Today a drink that is famous the world over, this probiotic, fermented milk beverage was first invented by the renowned Japanese scientist, Dr. Minoru Shirota in 1935. This small but mighty drink has been scientifically proven to help maintain a healthy stomach and increase the good bacteria in your system. Yakult is so popular in Japan that not only does it come in different flavors, but it is delivered from door-to-door and to offices each day and it even has a baseball team (the Yakult Swallows) named after it! 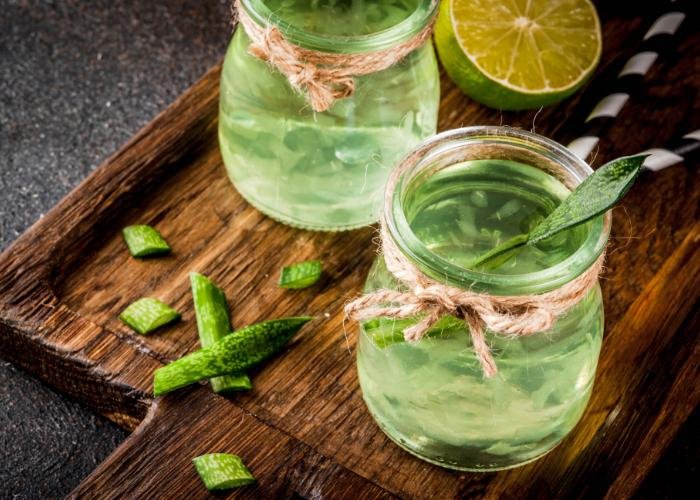 Okinawa is famous for many different tropical fruits and vegetables. Perhaps one of the best known is its aloe vera plant, which is cultivated year-round. The plant contains over 200 active compounds and vitamins and is acknowledged by the people of Okinawa as one of their secrets to long life! Aloe vera juice and aloe yogurt drinks are now among the most popular drinks in Japan and are widely available. 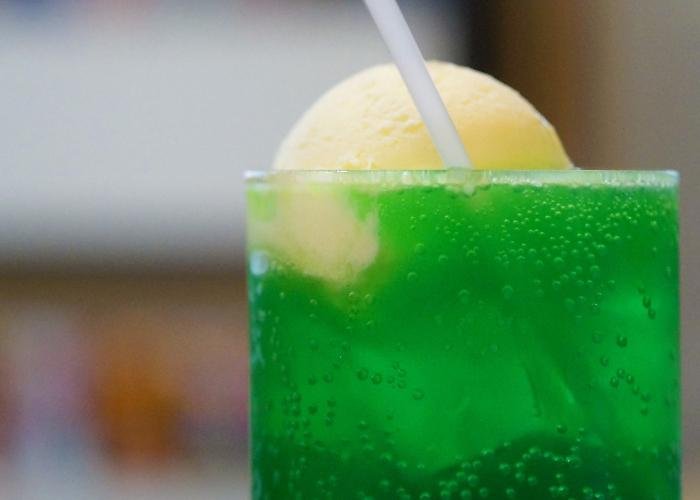 An absolute favorite amongst young Japanese high school students, melon soda is widely available and is a particular treat at karaoke bars and other places where students congregate! For a particularly decadent twist, add a scoop of vanilla ice cream for a melon soda float. 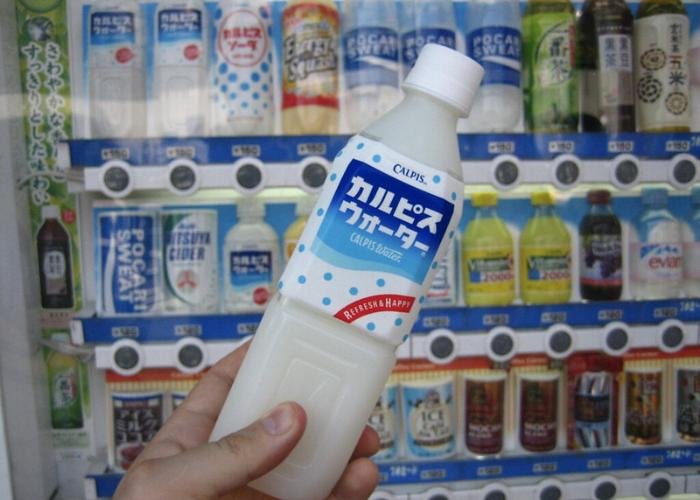 Calpis is a non-carbonated soft drink with a very unique taste (though it is also available as Calpis Soda, the bubbly version). It has a somewhat sweet and milky texture and a light, slightly sour aftertaste, not unlike Yakult. It is a drink that is popular with all age groups and is found throughout the country. Interestingly, Calpis is based on the ancient Mongolian drink airag, which the inventor of Calpis, Kaiun Mishima, tasted during an expedition to Mongolia. 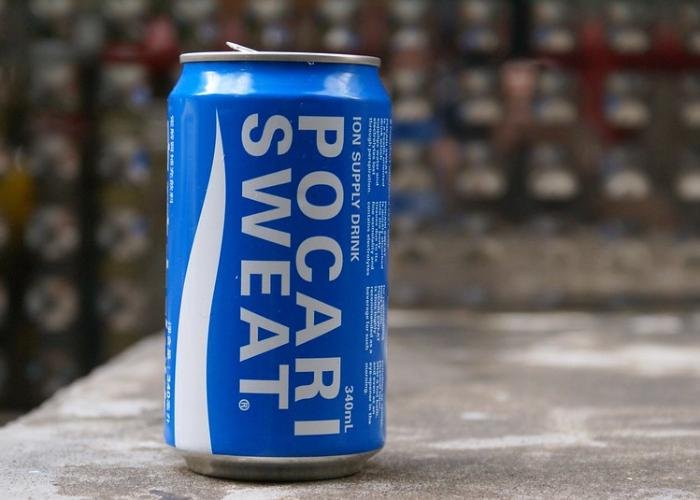 In the summer months, Japan can be punishingly hot and humid, so it is important to stay hydrated! Pocari Sweat is the drink (with a somewhat off-putting name) that will help you do just that! Strange name aside, Pocari Sweat is in fact a non-carbonated isotonic sports drink that contains important minerals and electrolytes that keep you hydrated and well-supplied with nutrients. The drink is available in convenience stores across Japan and is a favorite with athletes and sports teams. 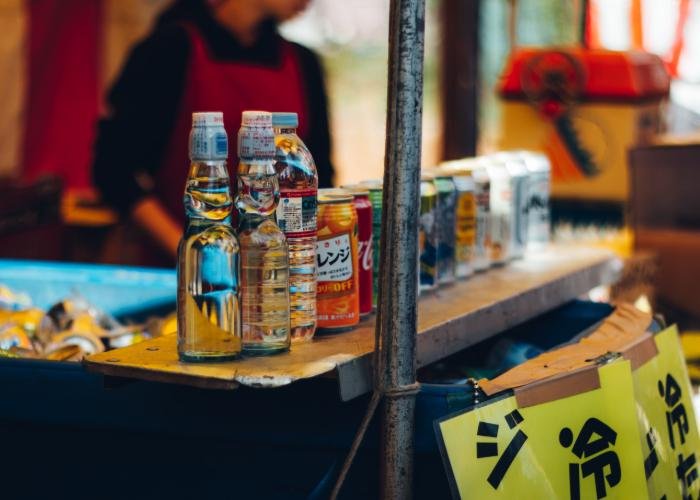 A summer favorite that is available at all matsuri (festivals) and is one of the most uniquely Japanese drinks on this list (despite first being introduced to Japan by a Scottish pharmacist during the Meiji era), Ramune is a carbonated soda that comes in a variety of different flavors and is served in its distinctly-shaped glass bottle for a refreshing summer treat. Sometimes referred to as "marble soda" abroad, to open this beverage you must push the marble that seals it into the narrow neck of the bottle. 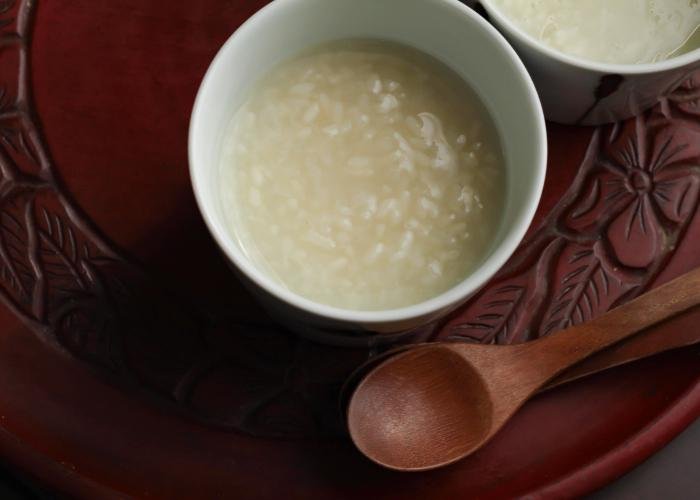 Amazake is perhaps the most unique drink on this list and has one of the longest histories. This sweet drink is made with fermented rice, and it can be alcoholic or non-alcoholic. Sometimes it is made with the sake kasu that's left over from the Japanese sake brewing process, giving it a delicious tang.

It can be served either hot or cold but is more traditionally enjoyed hot in winter to warm up holiday revelers through on chilly evenings. This drink is also a traditional Japanese New Year's beverage that is offered at temples and shrines during hatsumode.

Learn more about hatsumode and oshogatsu in our article about Japanese New Year Traditions! 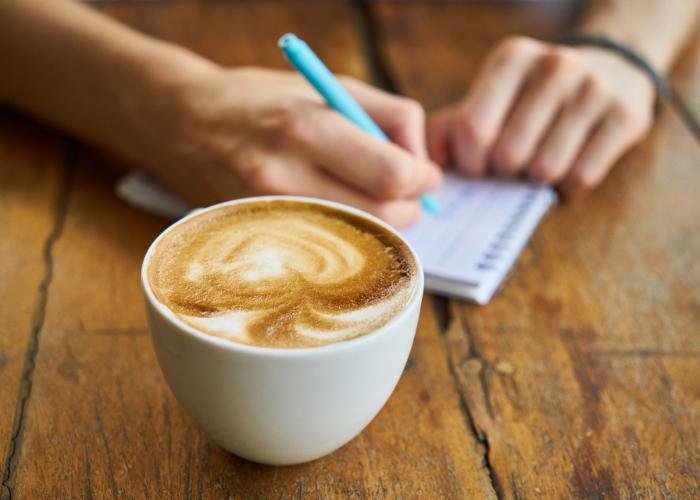 While Japan may be seen by many as the nation of green tea, make no mistake, Japan is also a coffee drinker's paradise. The most popular drink in the world after water, coffee can be found absolutely everywhere in Japan, from convenience stores and vending machines to tiny shops run by coffee purists who sell some of the most expensive and rare coffee beans in the world. Visitors to Japan should not miss the opportunity to sample a cup of one of Japan’s drip coffees, which is one of the preferred methods of brewing across the country.

To get your caffeine fix, check out these 8 Tokyo Cafes and Roasteries with Killer Coffee, or enjoy Japanese coffee anywhere in the world by ordering through byFood's gourmet market! 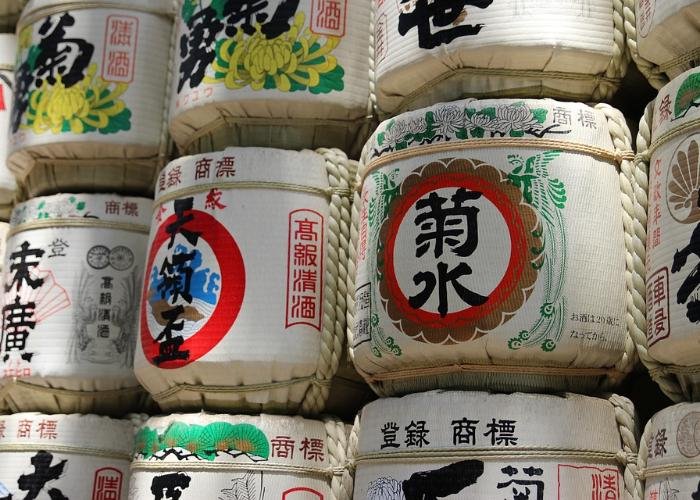 The grandfather of Japanese alcoholic drinks, nihonshu, or sake as it is known outside Japan, is a rice wine that is made from rice, rice koji, and water. It is believed that sake is the oldest alcoholic drink in Japan and there is evidence of sake consumption dating back to the third century!

This is a drink that can be served cold in summer and hot in winter and certainly should not be missed by any visitor to Japan. Sake has a huge number of different varieties and regional specialties. You can also find a great number of specialty sake bars that will give you the opportunity to try a wide variety.

Much like the growth of Japanese whisky, Japanese craft beer has also experienced a real boom in recent years. There are now many different craft beer pubs dotted around the country that offer some fantastic Japanese interpretations of beers such as IPAs and stouts but also some truly unique Japanese flavors such as beers brewed with sakura or yuzu! Read all about the must-try beer in Japan in our Japanese Beer Guide. 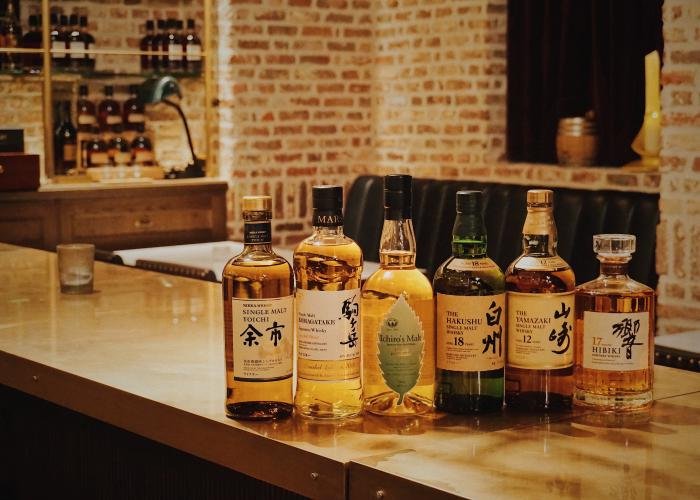 In 2014, the world of whisky experienced a shock when, for the first time in history, a Scottish whisky was defeated and a Japanese whisky was named the best in the world. Japan takes its whisky very seriously indeed and this can be seen with the wide and varied selection of local brands available. For those who are very interested in the process, the major Japanese distilleries also offer guided tours and sampling! 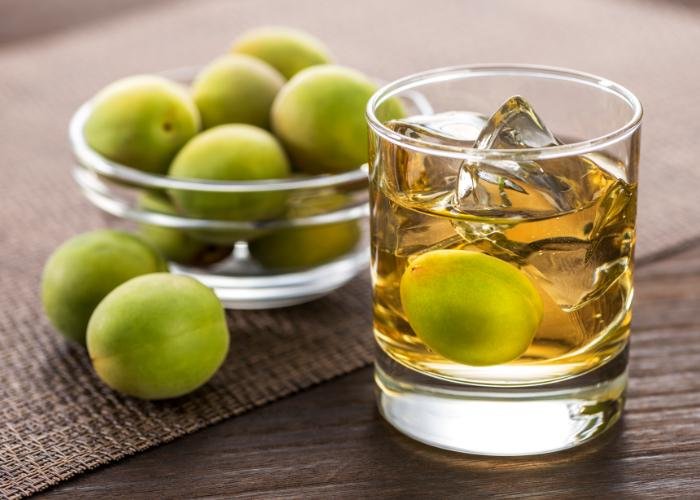 Umeshu or Japanese plum wine, is a sweet, plum-flavored liqueur with a rich taste and a honey-colored look. This alcoholic favorite can be drunk straight but is also delicious when mixed with soda water or even with a splash of water. 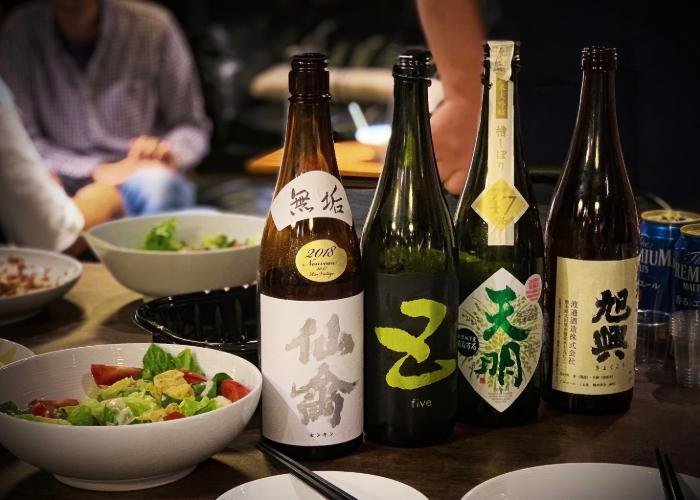 A staple of the izakaya, shochu is a clear alcoholic drink that can be distilled from a variety of ingredients such as sweet potatoes, barley, or rice. Regional variations of shochu can be drunk all over Japan and this is a very popular drink amongst salarymen and women during work parties. 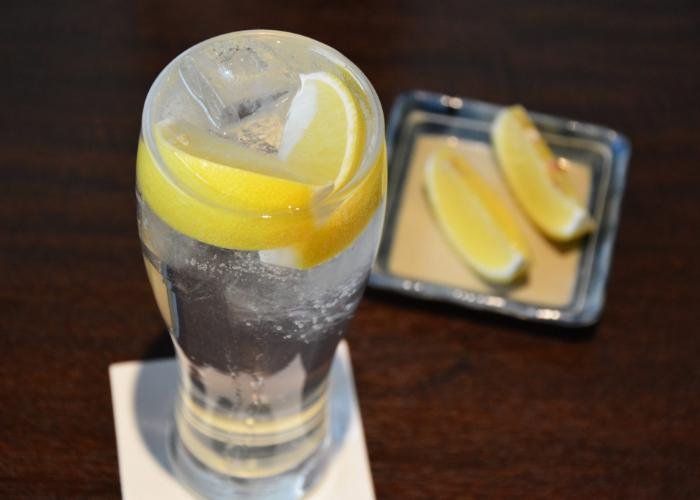 The university and college students’ drink of choice, chuhai is a combination of shochu and a sweet, flavored soda. The most popular variant of the chu-hai is lemon flavor but there are tens of different flavors available. Chuhai is readily available in all convenience stores but a tastier and more refined variation of the drink can be found in many izakaya and bars where fresh fruit is mixed in.

All in all, Japan has a huge variety of different, unique, and wonderful drinks to try. Many of these can be seasonal and completely unique to the region, meaning that for the visitor, there is an endless galaxy of flavors to experience!

Expand your palate. Browse tastings in Japan and become an expert on Japanese sake, whisky, tea, and more!

We strive to be as accurate as possible and keep up with the changing landscape of Japan’s food and travel industries. If you spot any inaccuracies, please send a report.
1
Click clap if you like this post
James Krick
James has had a lifelong passion for travelling and has made it one of his missions to eat his way around the world! These quests have led him to locations as diverse as the Middle East, Korea and to his current home, Japan. Currently based in Tokyo, he continues his exploration of Japan and its culinary delights!
SEE ALL POSTS
You may also be interested in
Travel Tips