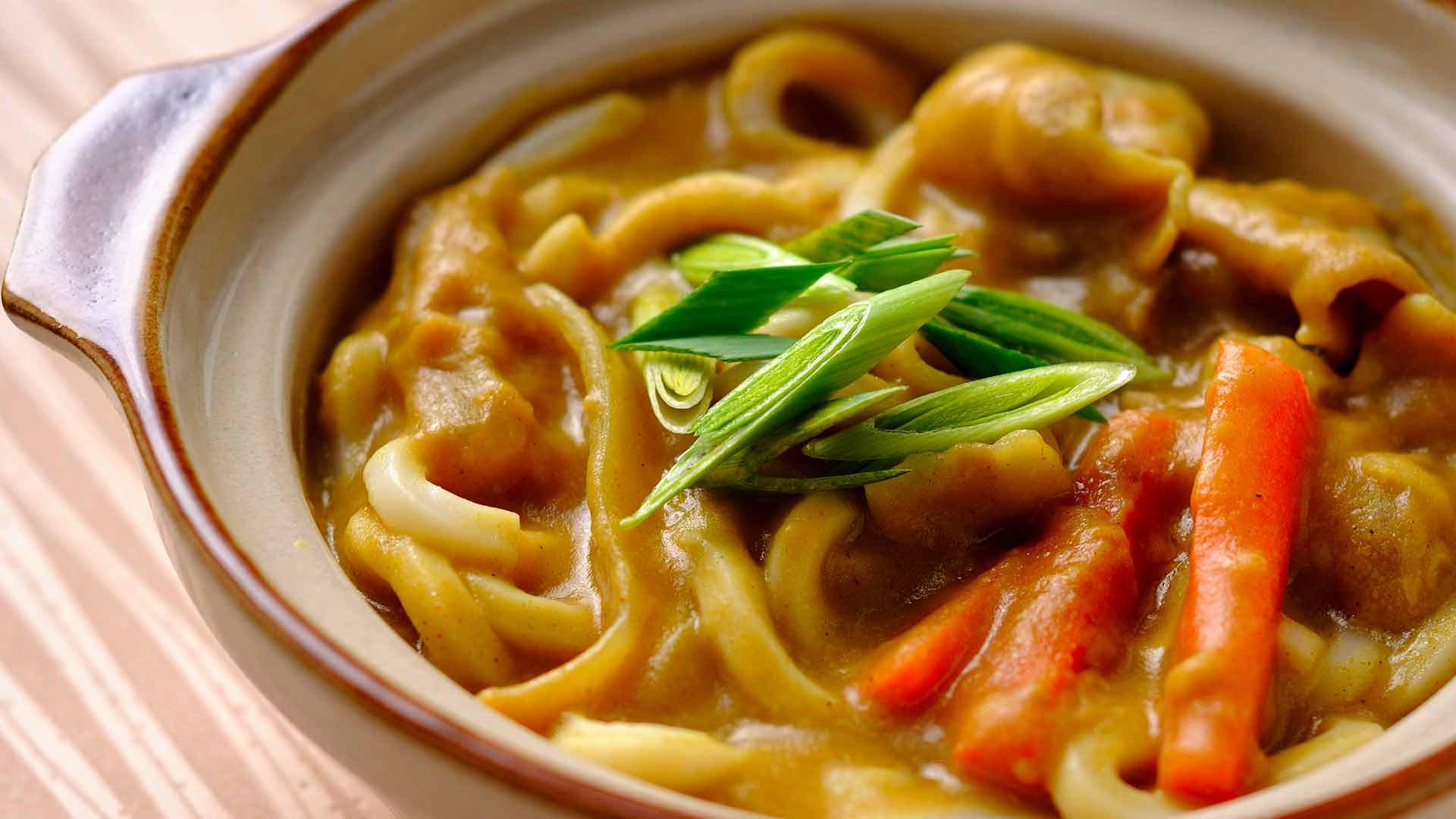 As a California native living in Japan, I revel in those few dry, sunny, spring days that feel like California weather, but I can also enjoy those cold, brisk, even snowy days of winter that I never knew as a child. And it’s on one those snowy winter days in Tokyo that I had my latest adventure. I had convinced two of my friends, one from Mexico and one from Australia, to join me on a trip across town in search of curry udon. The three of us have had minimal experience with winter weather and felt very brave for even venturing out into the cold. We were going to a highly rated udon shop, Maruka Udon, in the Kanda-Ogawamachi district in the northern part of Tokyo.

We thought this would be particularly fitting for the season and satisfy our craving for filling comfort food. The restaurant was a convenient 30-minute metro trip from my house. Once we arrived at the station, we noticed many shops selling ski equipment, snow boots, and goggles. The entire neighborhood was the perfect backdrop for the weather and seemed to suggest steaming hot comfort food.

We navigated pretty quickly with our smartphones, and the restaurant was easy to find. In Japan, it’s not always obvious if you’ve arrived at the right place as the sign may be small, or maybe only written in Japanese calligraphy, or may not exist at all. But at Maruka, in front of the shop was an enormous three-curtain noren with three Japanese hiragana letters spelling out うーどーん（u-do-n), signifying that the shop was open. And running down the street was a long line of hungry patrons. It had to be the place. 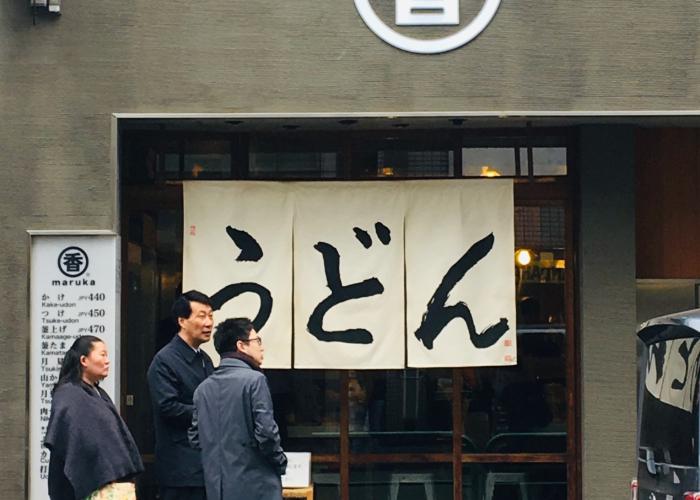 I was a little nervous about the line even though it was just fifteen people. Last month, I waited outside in the cold for two and a half hours at Sosakumenkobo Nakiryu for ramen and that line had only twenty people. It was now beginning to snow lightly, but that was no concern. We were at the front in less than 15 minutes. And while we were in line, we could research the various options on the menu that were displayed outside. The entire process was efficient and fast. As soon as we got to the front of the line, a young lady came outside and took our order. 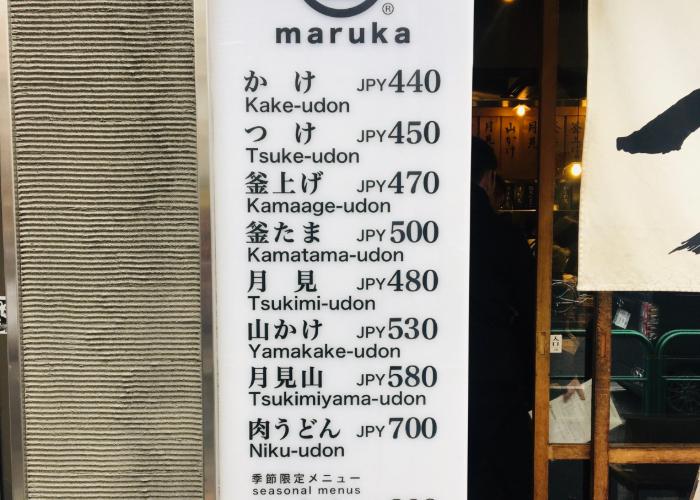 But which type of udon to choose? There was tsuke udon, dipping-style udon with cold noodles and broth served separately. And there was tsukimi udon, a type with a raw egg cracked overtop of the steaming noodle soup. When the egg white starts to cook from the residual heat of the broth, it resembles white clouds surrounding a full moon (the yolk). Fittingly, tsukimi is the Japanese word for moon gazing. And then there was the seasonal curry udon.

Initially, we wanted to try three different types, but the more we thought about it, the clearer it became that nothing else suited a cold winter day in Tokyo as perfectly as curry. For curry udon is a special Japanese winter dish, with a broth that combines sweet curry with dashi (light fish stock) to create an incredibly addicting flavor.

Once inside, we were seated at a small communal wooden table with wooden chairs, as is common at many casual restaurants in Japan. But if you want to sit by yourself, there is also a counter near the front door. In total, the restaurant could seat about thirty people, yet it was relatively quiet as the guests were quickly served, ate their udon, paid, and left. 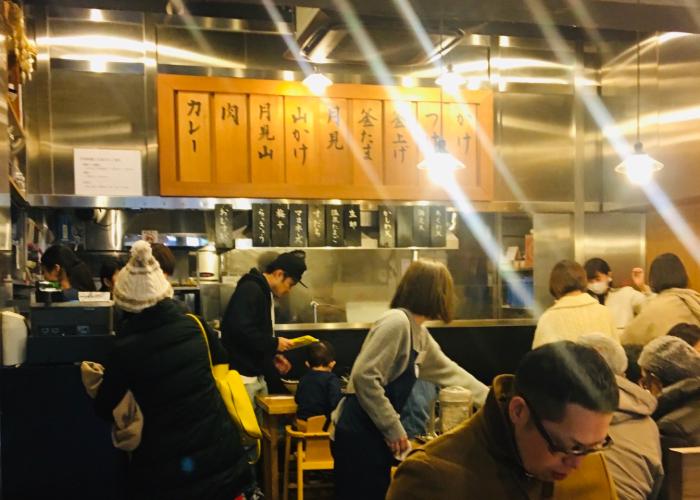 The interior of the shop seemed in complete harmony with the location. Though the Ogawamachi district in Tokyo is quite old, it’s also near the universities so there is a vibrant feel to the neighborhood. And that feeling carried right inside. Everything about the restaurant seemed new, from its young and energetic crew to the bright lights, to the clean floor and the warm wood-paneled walls. Another unusual aspect of this restaurant was its spacious kitchen with a glass viewing partition. Through this sizable counter-to-ceiling window, everyone could see the freshly made noodles being cooked up and the enthusiasm of the kitchen staff.

By the time we were seated, I was eager to try to the udon noodles, and we didn’t have to wait long. But in those few minutes, we noticed that the table next to us were eating two large and delicious looking tempura prawns that were not on the outside menu. Wanting to try them ourselves, we walked back outside and nicely asked for a serving of shrimp for our table as well. We first tried to order in Japanese, but thankfully her English was good, and our order was a success. 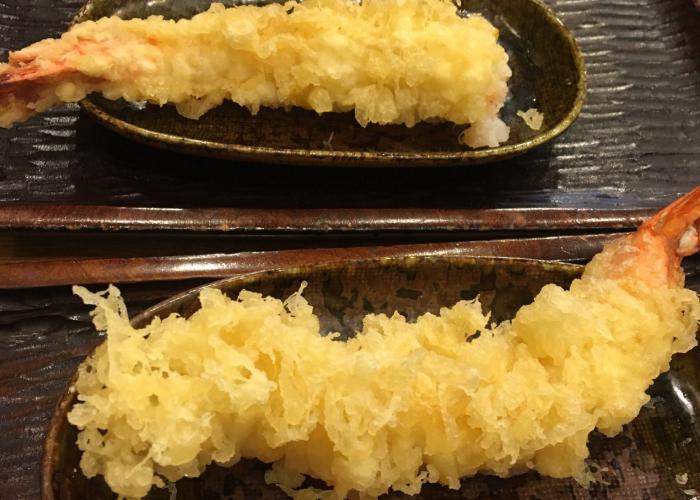 Soon, the bowls of curry udon arrived. The steam was strong, and the sweet curry fragrance wafted straight into my nose. I took a few moments to smell the aromas and try to identify what spices might have been used. Allowed the warm spice perfumes to permeate my senses, I could enjoy that glorious moment of feeling suspended from time and absorbed in the smells, the sounds, the anticipation of the flavors yet to come. The fragrances invited me to focus and enjoy the individual parts; the broth, the noodles, the toppings, and then see how they combined. So with this concept in mind, I began with the broth. Or, I wanted to start with the broth, but there were no spoons. Oh well, I just used my chopsticks, mixed in the green onions and tried the noodles.

What a satisfying taste! The udon noodles were supple yet tender, chewy and flavorful. And the broth was well balanced. It had a noticeable taste of dashi mixed with the curry, and though a little thinner consistency than other curry udon broths, it had depth. There was enough thickness to the broth to provide a fuller mouthfeel which lightly coated the thick wheat noodles. The curry was flavorful and not hot. It was almost sweet, and did I detect notes of anise? 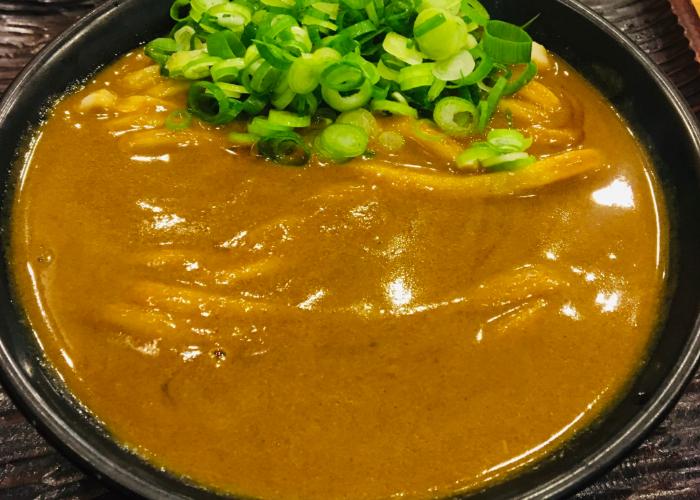 After a few bites, I began to experiment with the condiments at the table, and the real fun began. First, I added the flakes of cooked crunchy tempura batter and sprinkled them over the noodles. The crunch was perfect. Next, I added another dusting of toasted sesame seeds to my curry udon. This deepened the flavor, and so I ground a little more on for depth. Finally, I tried the Japanese shichimi chili pepper, and even though it was mild, it added even more complexity to the curry broth.

Now it was time to try the shrimp. I had waited just long enough for it to cool, but it was still warm. It was perfectly cooked; mildly sweet, buttery, slightly firm. The tempura batter was evenly seasoned and fried to a light golden brown. The combination of crunchy fried batter, sweet fresh shellfish, savory curry broth, and thick wheat noodles was the ultimate snow-day comfort food. It warmed me until I was satisfied, and prepared to return to the chill of the outdoors.

When we left, it didn’t seem quite so cold outside. With the snow still falling, we decided to linger and explore the Ogawamachi neighborhood. We encountered many narrow, inviting eating streets dripping with charm, some with interesting signs and others with brightly decorated lanterns.

We also discovered why there were so many winter sporting sports shops everywhere. Ogawamachi is Tokyo’s famous winter sports gear district. In this 400-meter area, street after street sells everything the avid skier and snowboard enthusiast could desire. There are large retailers, small boutique shops, and even second-hand stores. What a perfect find on this winter day in Tokyo.

After a bit of wandering, it was time to return home. As we made our way back to the station, we thought about what an unexpected adventure this was for these three sun-loving expats. On the surface, it seemed odd to travel 30 minutes on a snowy day to eat a bowl of curry udon, a noodle soup that we could get just about anywhere. But we laughed because we knew it wasn’t about getting our fill of noodles or even about finding the best udon restaurant in Tokyo, of which Maruka is undoubtedly one. It was about spending time together with friends discovering the unexpected perspectives and charms that only Tokyo has to offer.

Have a craving for Japanese noodles? Watch as Shizuka learns how to make udon noodles from scratch!

Kelly Crow
My mission is to help you experience Tokyo’s most memorable meals. I will share with you my discoveries with insights into culinary technique, cultural experience, and value from my distinctive combination of perspectives as a professionally trained Le Cordon Bleu chef, economist, and Tokyo resident.
You may also be interested in