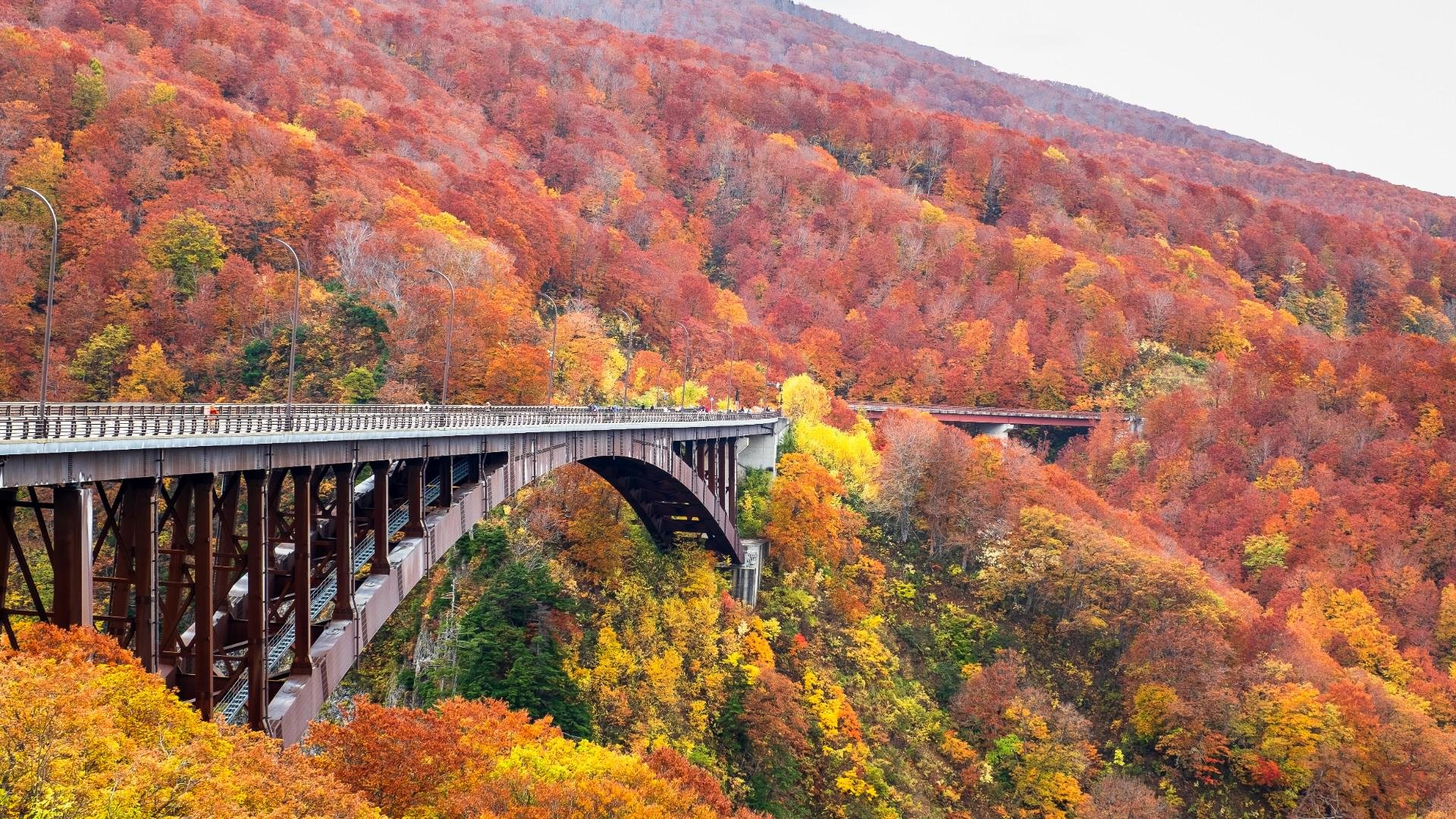 What to Eat in Aomori: Honshu's Northernmost Prefecture

Rugged and remote, the northern reaches of Japan’s main island feature mountainous terrain, crystal-clear rivers, and historic port towns like Hachinohe dotted along the coast. It feels a world away from the likes of Tokyo and Kyoto, a fact which is reflected in the local Aomori cuisine.

The pure spring waters make for delicious sake, the proximity to the colder northern waters of the Sea of Japan yields delicious seafood, and the orchards on the hillsides produce more apples than anywhere in the country. Given the comparatively cold climate, you can expect to find these and other local delicacies in warming dishes likes stews and hearty soups.

The capital city of the same name lies at the very tip of the mainland and was once the gateway to the wild frontier of Hokkaido just a short ferry ride north. Here, all of the fantastic food of the prefecture is gathered into one. You won’t be stuck for choice when deciding what to eat in Aomori. Let’s take a look at what delicious treats are in store for those who brave the long journey north.

What to Eat in Aomori

Here are some top local specialties to eat in Aomori. 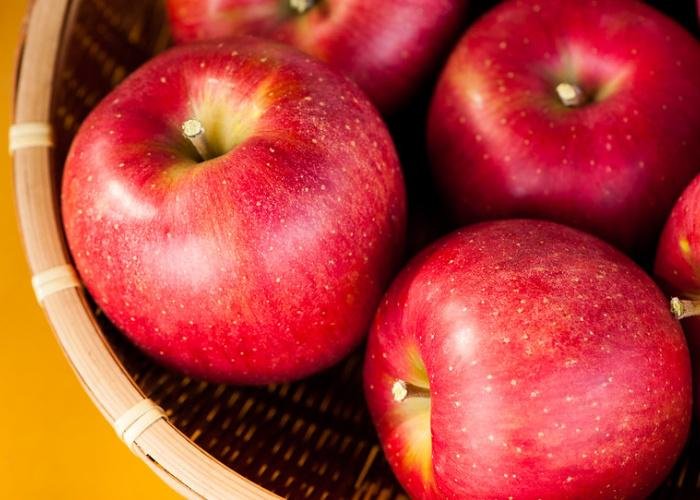 Ask a Japanese person what to eat in Aomori, and the first thing they’ll say is “ringo” — apples. As the most iconic Aomori food, the crunchy texture and juiciness of its apples are famed across Japan. Over half of all Japanese apples are produced here, as the local samurai turned to apple farming after the abolishment of the feudal system in the Meiji era.

Facing the prospect of getting a real job, this previously proud and wealthy class was forced to adapt. While in other prefectures they could turn their lands into rice fields, Aomori wasn’t suited to that crop. However, after importing apple seeds from the USA, the government found the summer climate of Aomori very agreeable for apple growing, so they distributed them among the old lords of the north.

Aomori apples come in many different varieties, the most popular of which is the Fuji, grown in the Tsugaru region. If you’re wondering where to try them, you won’t have to dig too deep indoor research; they’re everywhere in Aomori! There’s even an onsen in the town of Hirosaki where you can bathe in a bath filled with them! 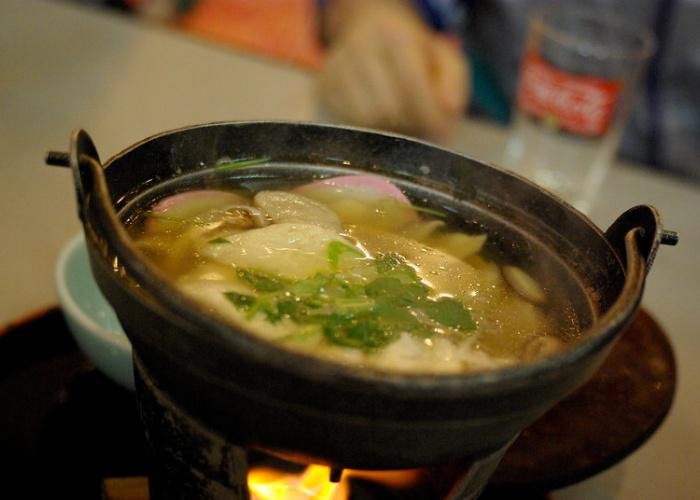 Senbei-jiru is made from a type of wheat cracker, broken up and cooked in a stew. This is a staple dish which would have been served to many a weary traveler at the roadside inns of Aomori, as they made their way north.

The pot traditionally contains a hearty mixture of mushrooms, root vegetables, fish, and game meat. The dish came from the practice of adding the crackers, which were usually served alone as snacks, into soups and stews.

It’s a flexible recipe, with many regional varieties. Some places use buckwheat for the crackers, some feature more fish than meat or vice-versa, and some experiment with the dashi broth base.

Although you might be imagining a soup of soggy crackers, the reality is anything but — the recipe for the senbei has been perfected over the years so that the pieces retain a firm-to-the-bite texture throughout the meal. 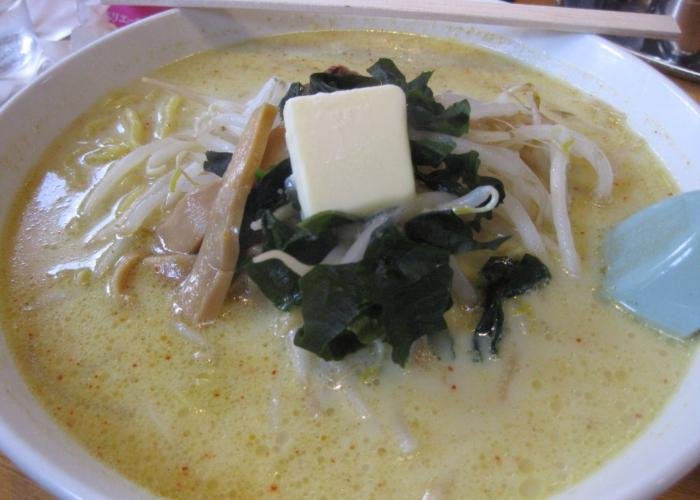 Experimenting with ramen is like alchemy. Some top chefs have made a name for themselves over the years by creating iconic new noodle soup dishes, but it’s easy to imagine that there were some less-appetizing culinary misadventures along the way. With that in mind, which category do you thing Aomori miso curry milk ramen fits?

Although the name reads like an adjective salad, the result is actually surprisingly delicious! The soup base is like a standard miso ramen, but with creamy milk blended in, and curry flavoring. The coup de grace is a cube of butter on top, which melts over bean sprouts, bamboo shoots, pork, and seaweed.

The dish was created by a ramen chef from Sapporo, who moved to Aomori City in the 1970s. Against all odds, his madcap original concoction is now the city’s most iconic dish! 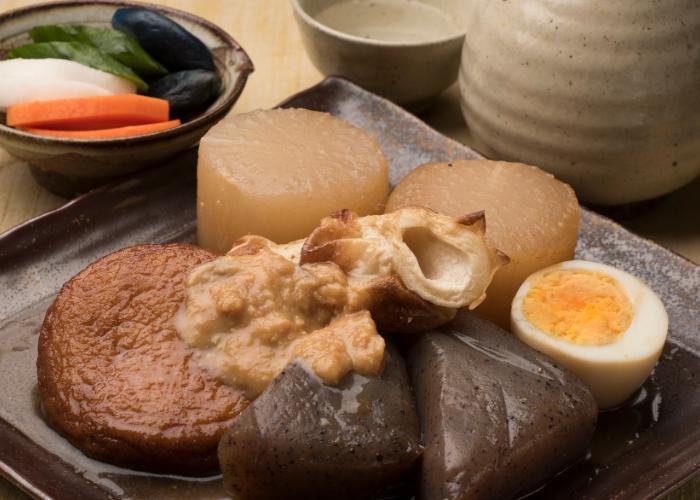 Oden stew is a ubiquitous Japanese dish when the dark nights and cold days of winter come along. You’ll see it in every convenience store, at food stalls, and on the menu of many an izakaya. The premise is simple: a light broth of soy sauce and dashi stock, in which a plethora of different ingredients are slowly stewed.

But Aomori’s own version have a couple of special ingredients on top of that: miso paste and grated ginger. Its origins can be traced back to a food cart vendor who plied their trade near the docks of Aomori City, where the Seikan Ferry to Hokkaido operated.

He drizzled his miso and ginger mixture over the skewered ingredients from the oden to make his dishes even more warming against the frigid seaside cold of an Aomori winter. The practice soon caught on and spread throughout the households and restaurants of the city, where it’s still the most popular local winter treat.

If you have good enough Japanese language skills to understand the name of this dish, you might be picturing something very strange indeed. That’s because the name literally means "boiled strawberries," but the reality is far from that.

This is a soup packed with abalone and sea urchin — two local seafood delicacies well-suited to the colder waters around Aomori. As one of the northernmost prefectures of Japan, Aomori has an abundance of these shellfish, surpassed only by Hokkaido.

The strange name of the dish comes from the supposed resemblance of the sea urchin pieces to strawberries, which is up for debate. The ones who named it thus were probably the fishermen who first invented it, who would cook it up fresh when coming ashore after a hard day at sea.

Jam-packed with the flavors of the ocean, ichigoni is seen as something of a celebration dish nowadays, on account of the premium ingredients inside it. You’re unlikely to find anywhere to enjoy this dish on the cheap, but for such a premium seafood feast it’s worth paying a little extra. 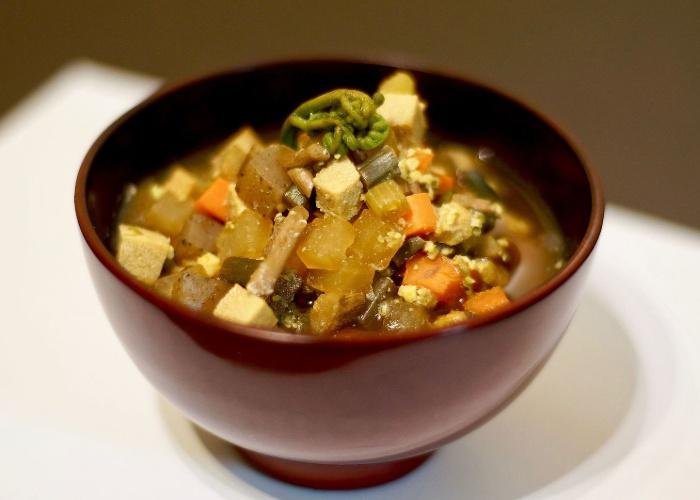 This Aomori home cooking classic is a favorite of everyone from housewives to top city chefs, and epitomizes the hearty soul food of the region. It’s a kind of miso soup made with diced root vegetables, wild plants, and tofu. In the olden days when rice was expensive, dicing up or shredding vegetables was often a cheaper alternative.

The dish is a favorite among home cooks not only for its deliciousness, but also its convenience. As your grandmother might have told you, second-day soup always tastes the best, and the same is true of kenoshiru. This Aomori classic could be prepared in large pots and reheated throughout the week for a quick meal.

On day of the first full moon of the year, it’s traditional to eat a bowl of kenoshiru to wish for a healthy year ahead. In fact, treating yourself to a batch or two each and every day of the year wouldn’t do any damage to your health either — it’s such a nutritious and enriching dish! 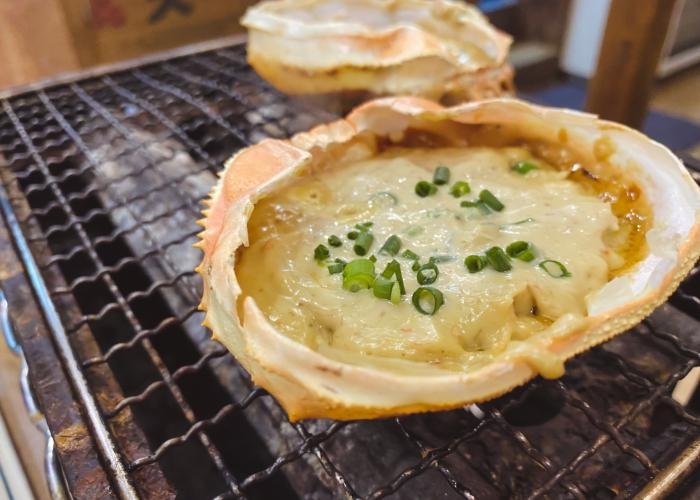 This is far and away the most visually unique dishes on our list of classic Aomori cuisine, because it’s cooked inside a giant scallop shell instead of a pan! Inside, you’ll find a shellfish stew with miso, egg, green onions, and dashi.

Cooking the scallop meat directly in the shell brings out the oceanic flavors nicely, while the miso paste adds a lovely rich flavor and warming effect. Kaiyaki miso used to be especially popular as a revitalizing dish for the sick and infirm, but it’s long been a key part of the home cooking for fishing communities in the Tsugaru and Shimokita areas.

Moving away from the coastal regions towards Hirosaki City, we find an altogether different kind of seafood dish. As was the tradition before refrigeration made fresh fish easily preservable, the local variety of Aomori sushi was fermented to keep the meat edible for longer.

When making sushi from dried squid, the people of Hirosaki found that they had lots of leftover offcuts, including the tentacles. Their waste-not-want-not solution was to chop them up and deep-fry them with vegetables, to make a tasty snack that goes excellently with a glass of beer.

The chewy texture won’t be to everyone’s taste, but if you’re a fan of calamari or takoyaki, this might be right up your alley.

If you’re planning a trip up north, you won’t be stuck for choice when deciding what to eat in Aomori; your culinary itinerary will be full to the brim with all of the dishes mentioned above and more. The rich flavors of this cold northern prefecture make for some delicious winter warmers, but you’ll also be able to enjoy plenty of fresh seafood and juicy apples year-round.

Callum Howe
Originally from Fife, Scotland, Callum is a literature graduate, freelance writer, and English teacher living in Tokyo. An interest in Zen drew him to Japan, so you can often find him visiting temples around Tokyo and beyond. He loves getting involved with the local music, sports, and arts scenes.