Moomin Bakery & Cafe: A Taste of Scandinavia in Tokyo

The Moomin Bakery & Cafe in Tokyo Dome is certainly one of the cutest themed cafes in Tokyo I have ever been to. I have actually been twice in my life, the first time being many years ago on my first solo trip to Japan. Most recently, I went with two friends from my university exchange program where we had a positively cute dinner together!

Swedish-speaking Finnish artist and children’s author Tove Jansson was the original creator of the Moomins in 1945. Starting out as children’s’ books, the Moomins went on adventures in their utopia, becoming iconic characters in books, comics, TV shows, and museums, films, and now, amusement parks. Their legacy has continued for over 70 years, making the characters some of the most recognizable and beloved around the world. 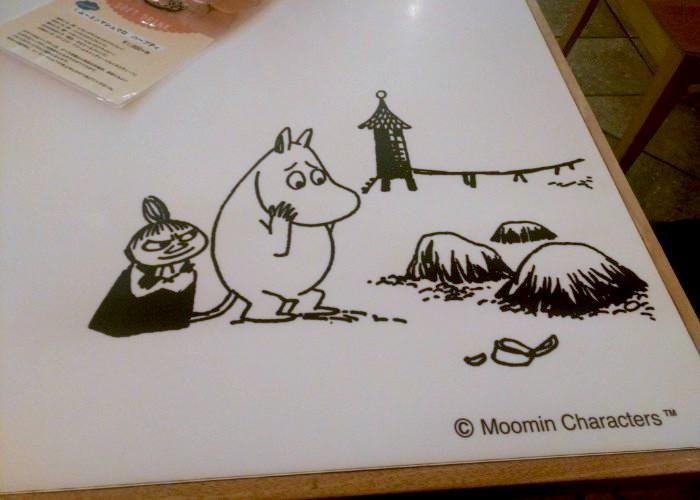 The popularity of the Moomins really grew at the end of the 1960s, when Fuji TV produced an animated series of the Moomins. Incidentally, on my exchange, I took a class about animation and video games in Japan. One of our guest lecturers was a director who helped to bring the Moomins to life in their first cartoon form! Finland and Japan have always had an ongoing affinity sharing arts and culture, and as it turns out, most of the Moomins die-hard fans are found in Japan (50% of the Moomin market is held in Japan, apparently). The most popular Moomin series to date is the Japanese Delight Moomin Family animated series, from the 1990s.

Heading to the bottom floor of Tokyo Dome, the Moomin Bakery & Cafe shopfront looked unashamedly storybook perfect. We were welcomed by two very cute Moomin characters cuddling, marking the entrance (an ultra-kawaii photo opportunity). It was pretty empty on the cold Tuesday evening we decided to go, meaning all the more Moomin magic for us.

We went inside to find Moomin characters printed all over the walls and the tables, their benign little faces looking at us from every corner. To one side, there is the bakery, and to the other is the sit-down restaurant/cafe. The restaurant menu was chock full of cute Moomin-themed dishes and drinks, while also offering a taste of traditional-style Finnish cuisine. 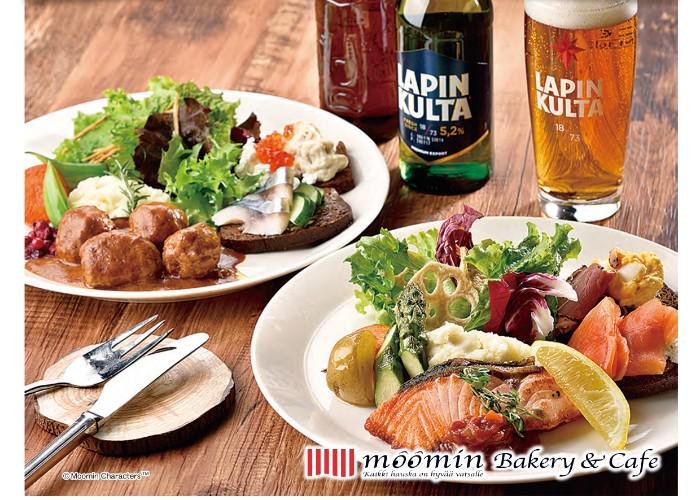 My two friends and I were greeted by a very sweet staff member who showed us to our table. We were offered to dine with a special guest, ie. we were able to choose a life-sized Moomin plush toy character to sit at our table with us. While we opted out of choosing our favorite Moomin character to join us (I know, I was disappointed that the group wasn’t on board with it) but it’s certainly a lovely feature of the cafe for any solo diners to enjoy some cute company. 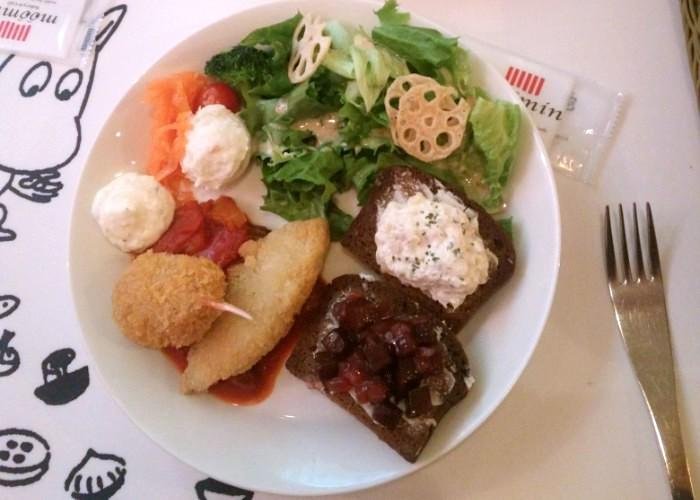 The food was colorful and attractive with different salad elements on my friends’ plates. I chose a gratin-style traditional Finnish baked dish, something my friend from Finland had told me about a few times. Matched with a Finnish beer, of course, I was fully committed to having the whole Moomin experience and bringing honor to my Finnish friend. The dish was cheesy and warming and definitely tasty on a wintery evening. Finnish beer and Finnish cuisine surrounded by cute Moomin characters. What more could you want at the Moomin cafe? 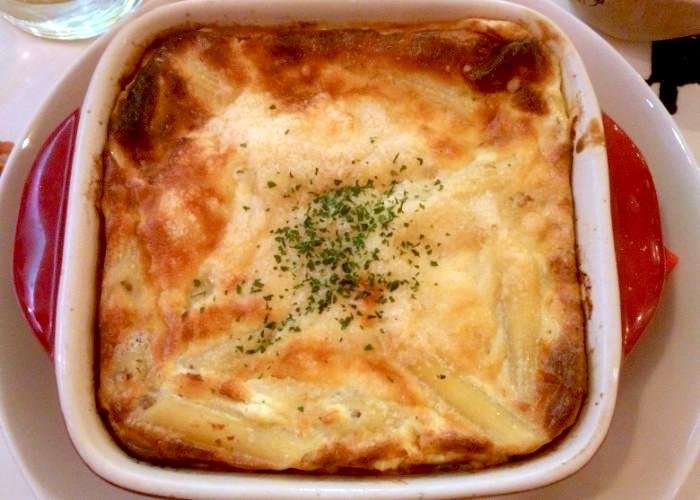 Sadly, we did not indulge in any of the themed desserts and drinks. But, at some point in the evening, the table next to us had a birthday! It was for a little girl with her parents, so all the staff members sang a birthday song, and we joined in, of course. You had to be there, but it blew the cuteness scale out of the park (or maybe I should say Dome?). The tiny birthday girl was unbelievably excited for being served up an extravagant Moomin dessert, literally jumping up out of her seat. 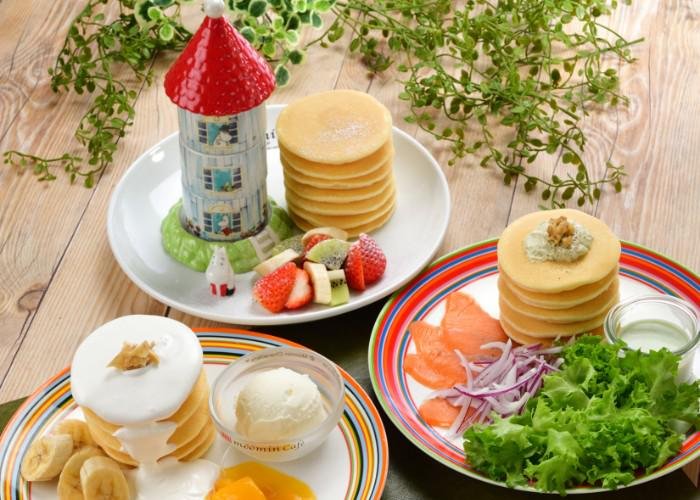 Some of the cafe menu items were a little bit pricey, however, one of the best parts was the Moomin themed bakery onsite! With plenty of Moomin souvenirs and sweets, there were also delicious pastries and breads ready to eat at the cafe or to take home as a midnight snack. We can’t forget the signature: a sweet bread in the shape of a Moomin, a Moomin-pan! A little character bread makes for the perfect snack for anyone with the Moomin munchies. 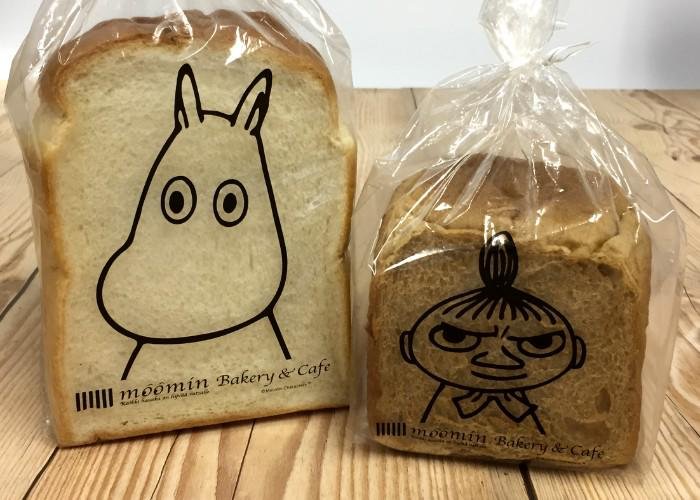 Even for someone who isn’t a major Moomin fan, it was an incredibly sweet experience. Next, I want to go to the Moomin House Cafe, another Moomin themed restaurant located in the Skytree area (they have got pancake stacks, Moomin shaped pasta, and cute themed drinks)! Or better still, the life-sized Moomin Valley Theme Park that opened in Saitama, on the outskirts of Tokyo, earlier in 2019.

We strive to be as accurate as possible and keep up with the changing landscape of Japan’s food and travel industries. If you spot any inaccuracies, please send a report.
21
Click clap if you like this post
Lucy Baker
Never not hungry, Lucy is an artist and foodie from Australia. You can find her hunting for the next delicious deal, documenting her food, or brunching. She lives firmly by the philosophy that food friends are the best of friends.
SEE ALL POSTS
You may also be interested in
Tokyo