What to Eat in Okinawa: The Hawaii of Japan

What comes to mind when you think about what to eat in Okinawa? You might think about a staple food like goya champuru or tender boneless pork ribs or belly. Maybe taco rice even springs to mind.

Okinawan culture differs from that of mainland Japan, and this extends to Okinawan cuisine, too! Most of the local dishes in Japan's southernmost prefecture are quite different from other traditional Japanese dishes due to Okinawa's location and historical background.

Okinawa Prefecture consists of more than 150 islands in the East China Sea, between Taiwan and Japan’s Honshu island. Thanks to the tropical climate, vast beaches, and coral reefs, as well as the Ryukyu Kingdom's history, there are lots of delicious Okinawan food to enjoy during each of the four seasons, from hot food to cold desserts. Due to its unique climate, the cuisine of the Okinawa Prefecture of Japan is distinct from the Japanese cuisine of mainland Japan. The longevity of the Okinawan people is often attributed to the island's food, as Okinawan dietary habits have traditionally skewed toward vegetables and seafood products.

Let's dive into some of the local food and explore what traditional Okinawan cuisine is all about.

Join the Flavors of Okinawa Tour >>

What to Eat in Okinawa

A staple of Okinawan cuisine, Okinawa soba, also known as Okinawa ramen, is a kind of noodle that is generally thick like udon and slightly twisted. It is a local specialty dish of Okinawa Prefecture that uses noodles made in a process derived from Chinese noodle-making. It is easy to find in most local restaurants in different areas of Okinawa

There are also regional styles of this soba dish. For example, if you order this Okinawan dish on Ishigaki Island and the other Yaeyama Islands, you'll find they have thin, straight noodles. The Okinawa ramen of the Yaeyama Islands is called Yaeyama soba. The buckwheat noodles of Miyako Island are also thin and flat without any shrinkage and are called Miyako soba because of the unique characteristics of the ingredients and the way they are arranged. 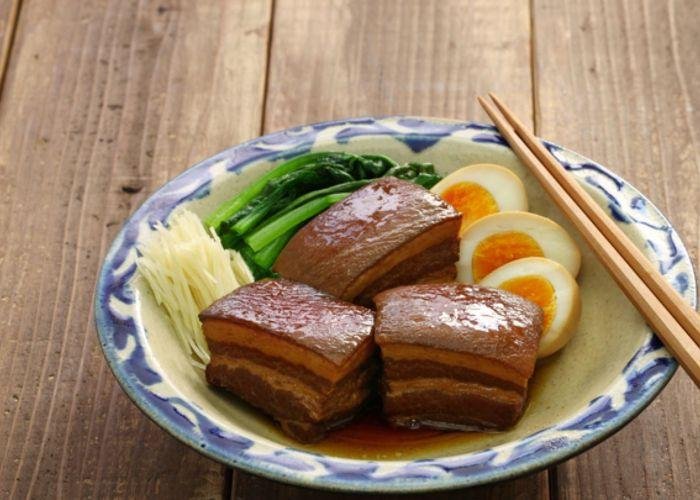 Rafute (braised "pork cubes") is another local dish of Okinawa Prefecture. It is made with skin-on pork belly stewed in soy sauce and brown sugar. During the Ryukyu Dynasty, the Chinese pork dish "Tong Po Lo" was introduced to the Ryukyu kings, who loved it so much that it became one of their court dishes. One of the characteristics of the dish is the use of awamori (an alcoholic beverage indigenous and unique to Okinawa) in the cooking process. One recommended Okinawan restaurant where you can try this dish is Yuunangii (ゆうなんぎい) located in Naha. 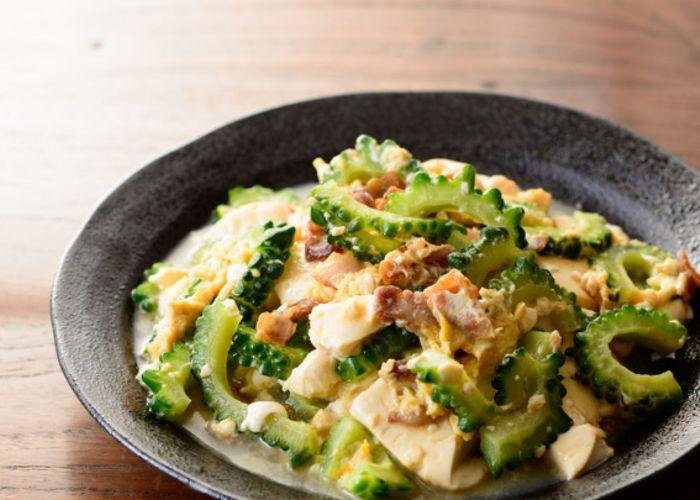 Okinawan bitter melon (“goya”) is known as the "king of summer vegetables" and is a staple food in Okinawa that's rich in vitamins. It is said that one of the reasons why many people in Okinawa live long lives is because they often eat bitter melon, a traditional food in Okinawan cuisine. You can find this Okinawa bitter melon dish easily in most local restaurants in Okinawa.

Check out Goya: 3 Easy Japanese Bitter Melon Recipes for Summer to learn how to cook goya chanpuru and other bitter melon dishes!

When it comes to Okinawa's specialty dishes, Ishigaki beef should be a must-try dish on your list. Ishigaki Island is one of the most popular tourist destinations in Okinawa Prefecture and boasts Ishigaki beef, a brand of beef raised in the warm and natural environment unique to Ishigaki Island.

See our post on Ishigaki Island for Okinawan restaurant recommendations, including places to try Ishigaki beef and things to do! 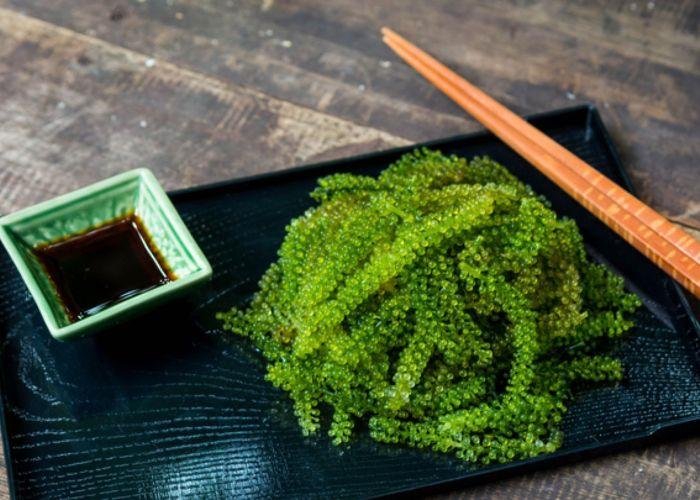 Umibudo means “sea grapes” in Japanese. In Okinawa Prefecture, it has been eaten for a long time and is sometimes called “green caviar” because of its shape. Umibudo is eaten raw, dipped in soy sauce and vinegar as a sauce, and gives puchi puchi popping sensation similar to ikura (salmon roe).

Umibudo is also used as a garnish for sashimi. It is also eaten as umibudo-don (umibudo rice bowl) on a bed of rice topped with sanbaisu vinegar, or as umibudo soba (buckwheat noodles) without seasoning. If marinated in a seasoning solution for a long time, the umibudo beads will shrivel up.

Among all of Okinawa's specialty dishes, the flavors of this one may already be familiar to you. Taco rice is an Okinawan dish consisting of rice topped with typical taco ingredients from the Mexican-American style dish, served with a tomato-based salsa. It was first created in 1984 in Kanatake Town, Okinawa Prefecture. It has become a popular dish in the prefecture and has been used in school lunches since the 1990s.

The rice is with minced meat or dry curry in the way it is eaten. It is usually served with a tomato-based red salsa, but sometimes tomato ketchup is used in place of salsa at popular restaurants and bento shops. 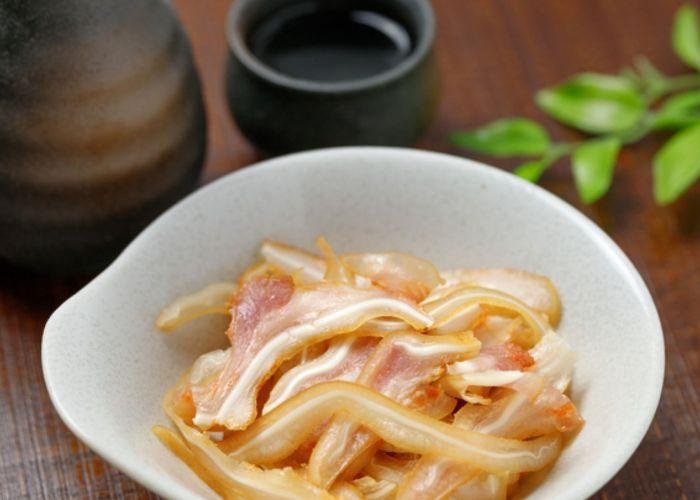 Mimiga (pig’s ear) is an Okinawan dish made from seasoned, thinly cut pig’s ears. The pig's ears are boiled or steamed and cut into strips.

Mimiga is eaten as a vinegared dish, often with sauces such as ponzu, vinegared miso, peanut miso, or just salt. It is characterized by the crunchy texture of the cartilage, similar to that of hardened jellyfish. It is high in collagen and is considered beneficial for health and beauty. When mimiga is eaten cold, it is often called mimiga sashimi. The texture is crunchy and chewy.

Sata andagi (Okinawan donuts) is a type of deep-fried sweet from Okinawa Prefecture. It is a spherical fried doughnut made of sweet batter. It is considered to be a good luck snack and is served at weddings and other celebrations. Because of the sugar content, the small size of the air bubbles in the crumb, and the density of the dough, it is a confection that is satisfying and filling, with a crunchy surface.

In addition to being made at home, sata andagi are also sold at tempura stores, on street corners, and in markets, especially in Okinawa shopping streets such as Ishigaki City Public Market. When sold in stores, the type made with refined sugar is called "white" and those made with brown sugar is called "black.” 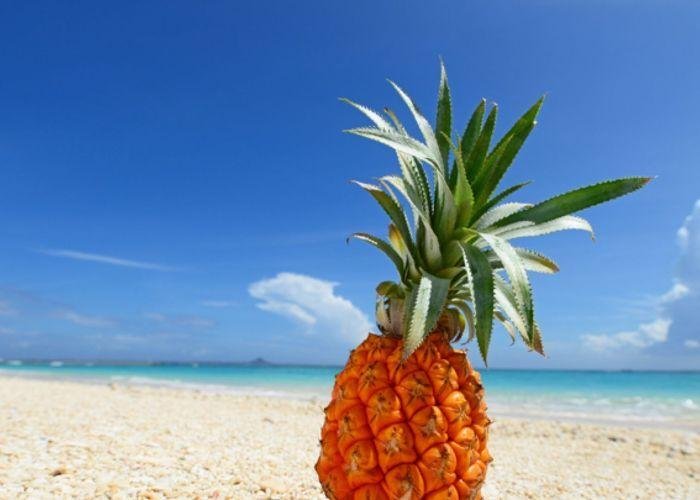 Okinawa is famous for pineapples, so there are a lot of pineapple products to try. The pineapple-flavored ice cream or hyouka (ice) are both worth a try. Especially in summer, these pineapple treats are suitable for cooling off in Okinawa's hot weather.

In traditional Okinawan cuisine, you can taste different flavors such as bitter, sweet, and salty; and enjoy a variety of textures, from popping umibudo to crunchy mimiga. If you are thinking about what to eat in Okinawa, mark down these Okinawan dishes so you can try them while exploring Japan's southernmost island!

Experience Okinawan culture through food! Browse food experiences in Okinawa and check out our YouTube channel to follow along on our food adventures in Japan!

We strive to be as accurate as possible and keep up with the changing landscape of Japan’s food and travel industries. If you spot any inaccuracies, please send a report.
5
Click clap if you like this post
HUI Sum Ping
Sum Ping is a Japanophile from Hong Kong, who always explores Japan and deep Japanese Culture. He has been an executive member of the CBS Japanese Culture Club in Hong Kong Polytechnic University for 2 years and always shares information about Japan with his schoolmates.
SEE ALL POSTS
You may also be interested in
Travel Tips

20 Top Things to Do in Okinawa, From Beach Activities to Cultural Deep-Dives