The Art of Japanese Knives

Thanks to their artisanal craftsmanship and the precise cuts they produce, Japanese knives are highly regarded all across the world as being among the finest culinary tools you can have in your kitchen arsenal. They come in a wide variety of designs, including versatile multipurpose options and specialist blades created for one specific task.

In this article, we’ll go into more detail about what makes Japanese kitchen knives so special, as well as some of the different styles that are available. Hopefully, this will help you to choose the perfect Japanese knife for your needs! 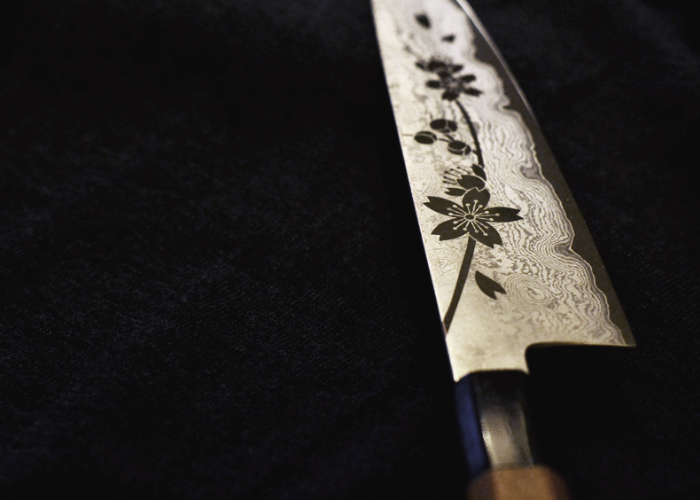 The history of knife-making in Japan

The art of crafting Japanese knives was greatly influenced by the art of making katana, traditional Japanese swords. Even today, they are handmade by blacksmiths using traditional methods that have been passed down through the generations. First, a blank block of steel is heated in a forge and pounded into shape with a hammer, before being quenched in cold water to strengthen the metal. This cycle is repeated until the blades are ready to be sharpened and polished, thinning the cutting edge. Finally, the handle is attached, and it’s ready to be used.

Among the most famous locations for knife-making in Japan are Seki City in Gifu – which was once home to master swordsmith Motoshige – and Sakai city in Osaka, which began producing blades to cut tobacco 600 years ago and now provides the majority of professional chefs’ knives in Japan. 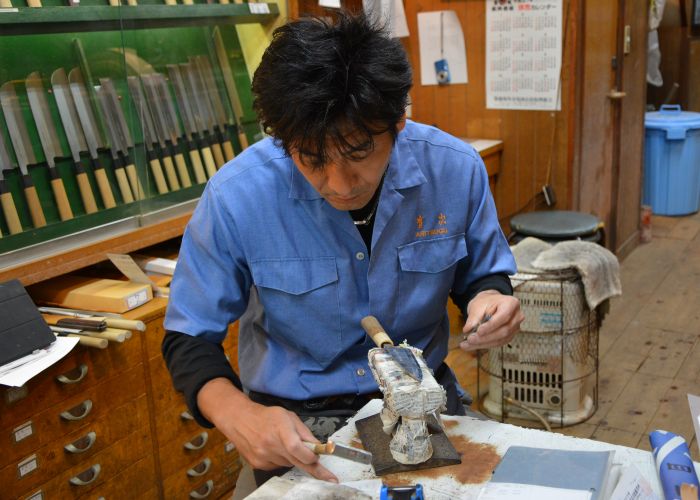 Looking at how Japanese knives are made helps to explain why they are so highly valued. Japanese kitchen knives tend to be forged from very hard steel, and sharpened until the edge of the blade is extremely fine. This sharpness ensures that the knives cut more smoothly and cleanly, with minimal damage to the surface and texture of the ingredients – something especially important when preparing foods such as sushi and sashimi.

In addition, unlike western varieties, it’s common for a Japanese knife to have a single-bevel blade. This means that the edge is only sharpened on one side, making it easier to achieve high precision cuts.

Are Japanese knives cheaper in Japan?

Such expert traditional craftsmanship produces knives of high quality, which is why they tend to be more expensive than those from other countries. However, if you’re visiting Japan you’ll be able to pick one up as a souvenir at a cheaper price from specialist locations such as Tokyo’s Kappabashi district. Just remember to leave it sealed in its box in your checked luggage until you get home, to avoid any problems at the airport! 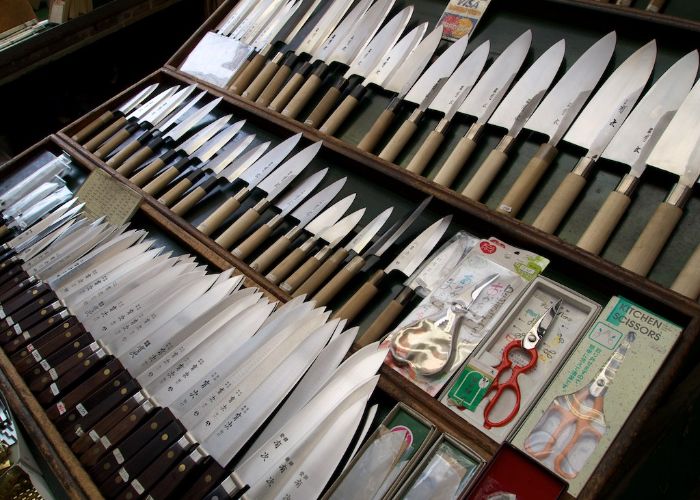 There are a huge variety of Japanese knives out there, ranging from all-purpose styles to those designed to cut one particular ingredient. Here we’ll introduce ten of the most common types:

This is a versatile chef’s knife, which can be used for cutting a wide variety of ingredients from vegetables to fish. It’s typically lighter and thinner than equivalent Western blades, and a great choice if you’re looking for a multipurpose Japanese knife. 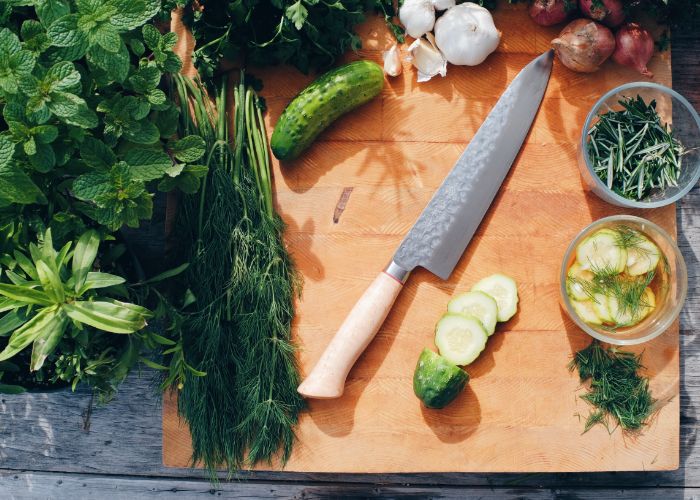 Another all-purpose Japanese knife, the santoku (meaning ‘knife of three virtues’) can be used to cut vegetables, fish and meat. It tends to be a little shorter than a gyuto knife, with a flatter tip. 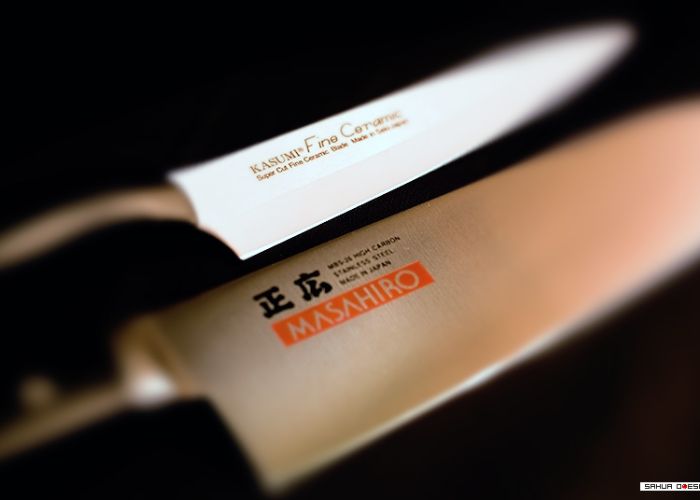 This is a long, thin knife designed for slicing ingredients such as fish. It has a sharp tip with a steep angle, allowing you to make very precise cuts with it. 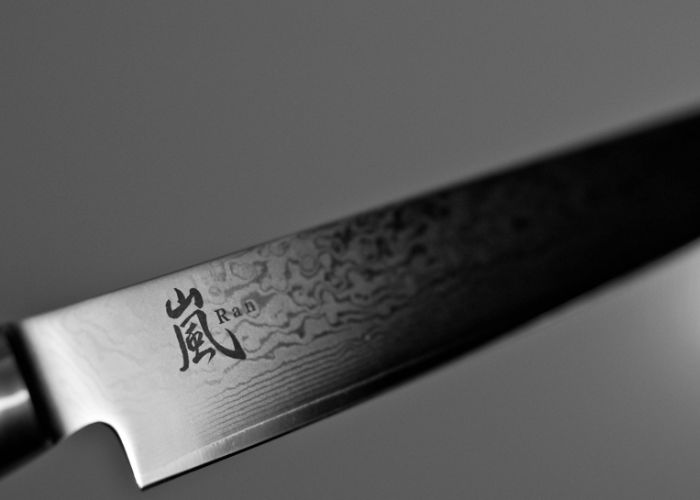 Deba knives are heavier blades made for filleting fish, and are durable enough to cut through thin bones. There are several kinds of deba available for more specific uses, such as ko-deba for smaller fish and kanisaki-deba for shellfish such as crabs. 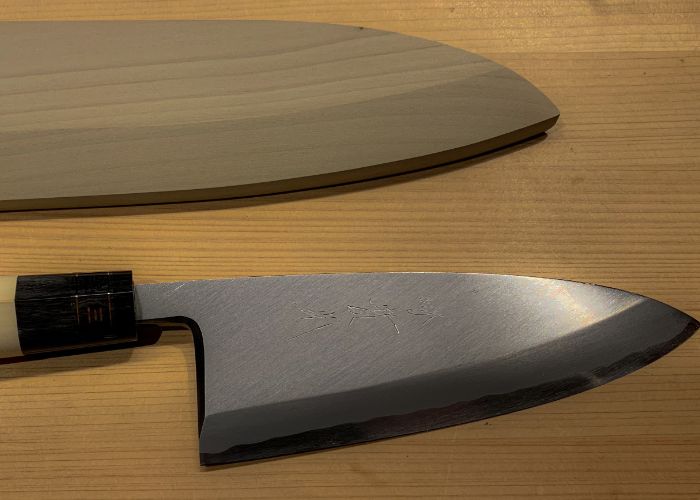 An usuba is a thin, rectangular Japanese knife that’s designed for cutting vegetables. It has a straight blade with a narrow edge that’s only sharpened on one side, making it ideal for getting precise, paper-thin slices. 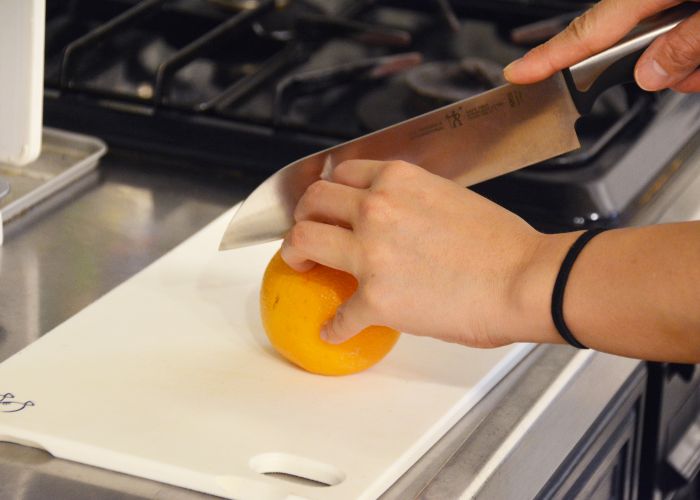 Nakiri Japanese kitchen knives are also crafted for use with vegetables and have a straight rectangular blade and flat tip. This style is more suitable for thicker-skinned vegetables than an usuba knife, and is popular with home cooks. 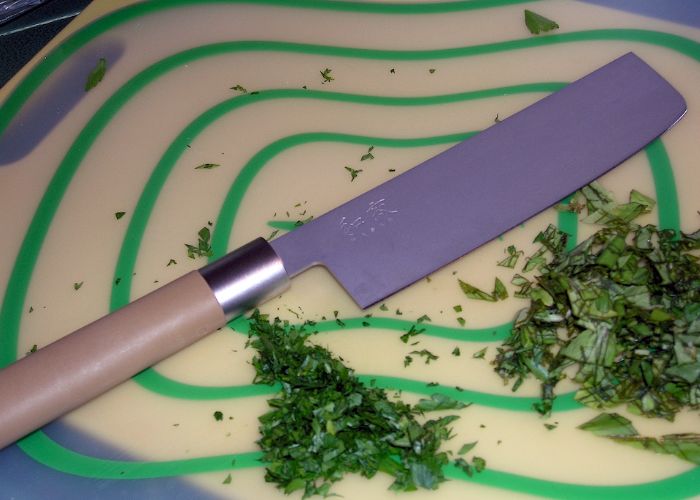 A petty knife is also referred to as a utility knife or paring knife, and is a mini version of a gyuto. It’s used when a bigger blade would be unwieldy, for instance with delicate tasks such as peeling and cutting fruit or other small food items. 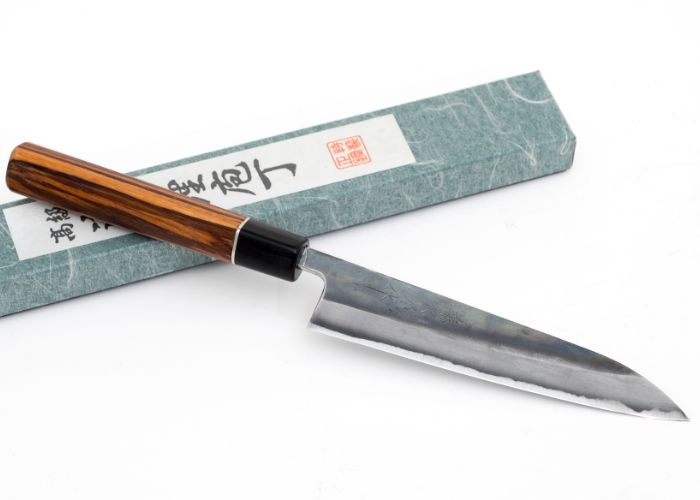 The yanagiba, meaning ‘willow blade’, is a specialist Japanese knife used for preparing sashimi. It has a long, slim blade that can slice smoothly through raw fish in one stroke, helping to preserve the flavor and texture of the ingredients. 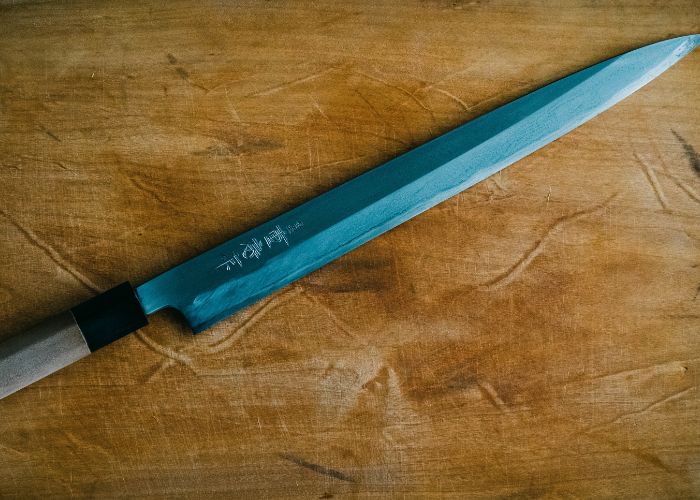 This is a boning knife also known as a sabaki, with a distinctive triangular blade and sharp tip, which is commonly used in the preparation of fish and for deboning poultry. There’s also a thicker and longer version known as the garasuki, that can be used for larger birds and cuts of meat. 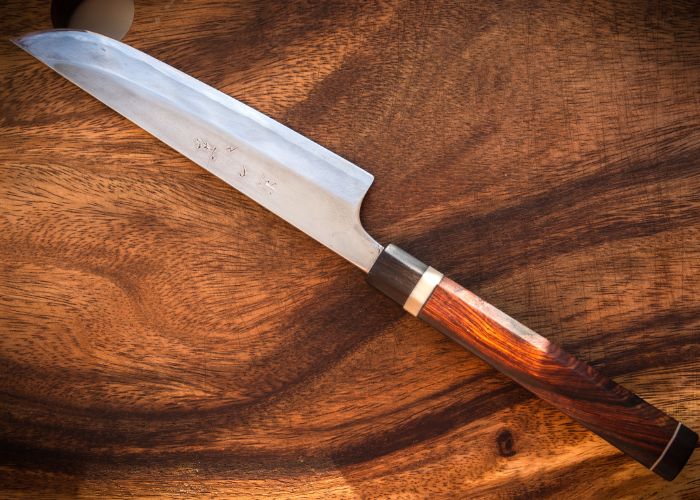 A menkiri is a characteristic Japanese knife designed for cutting udon and soba noodles. It has a large flat blade similar to a cleaver, that extends to the end of the handle so you can cut the entire length of dough in one go with a perfectly straight slice. 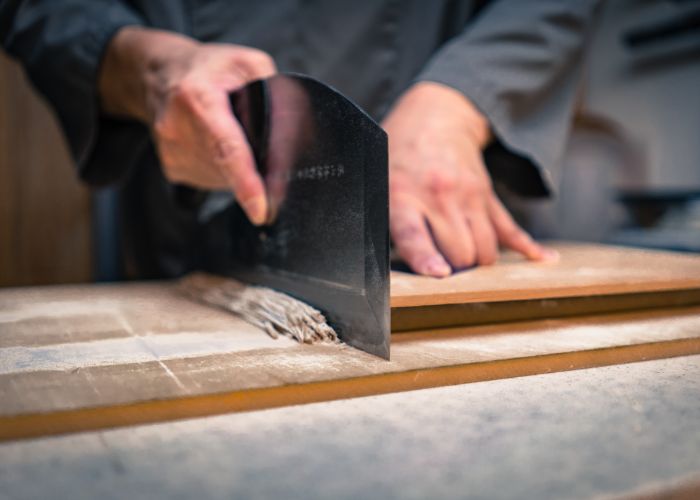 What is the best Japanese knife?

As you can see from the list above, it doesn’t really make sense to ask which Japanese knife is the best, because each type has its own unique purpose. Therefore a more appropriate question to ask is which Japanese knives are best for you. The answer will depend on factors such as what kind of ingredients you intend to cut with it, whether it’s for home or professional use, and the style that you personally feel is most comfortable to use. It’s also worth thinking about your own skill level, and how easy the blade is to care for. 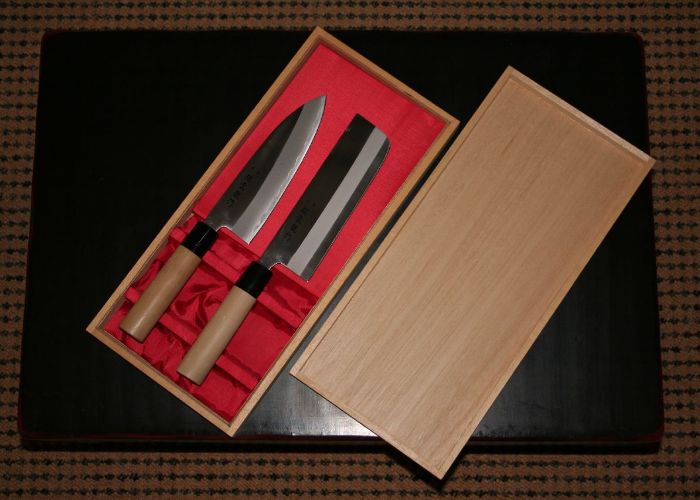 Japanese kitchen knives are not the only ones that have a top reputation, and keen cooks will know that German knives also come highly recommended. This leads to the inevitable question of which style is better. However, just as there is no ‘best’ Japanese knife, it’s impossible to say whether Japanese knives are ‘better’ than German knives – it all depends on the purpose you want to use the blade for.

As a general guide, Japanese blades tend to be sharper, harder, thinner and lighter than German ones. This makes them more suitable for delicate and precise food prep such as slicing fish or cutting vegetables. On the downside, it also means the knives are more prone to breaking and chipping. Meanwhile, robust and durable German knives are ideal for heavy-duty work such as cutting through tough vegetables, meat or bone. 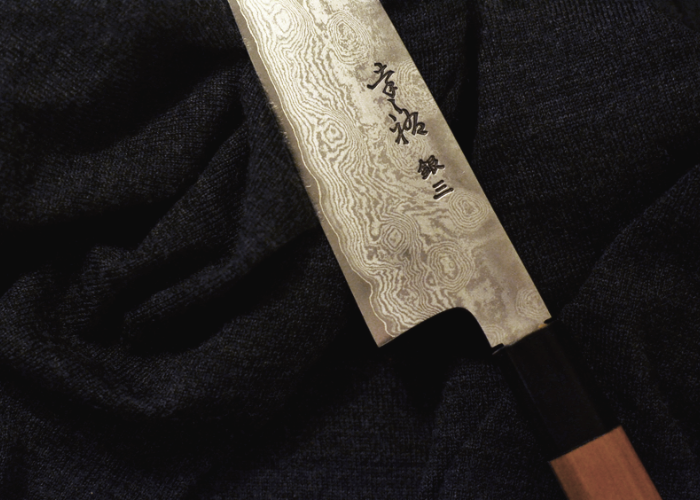 How to maintain Japanese knives

Taking good care of your Japanese kitchen knives will ensure that they last as long as possible. You can do this by always washing them by hand (not in a dishwasher), and drying them thoroughly to make sure they don’t rust. It’s also best to use a Japanese knife with plastic or wooden chopping boards rather than ones made of harder materials such as glass or granite that might chip the blade.

When it comes to how to sharpen Japanese knives, for many people the best option is simply to take them to a professional. Alternatively, you can purchase a whetstone and sharpen them yourself at home with the help of online video tutorials. Steer clear of pull-through sharpeners though, because these may damage the blade. 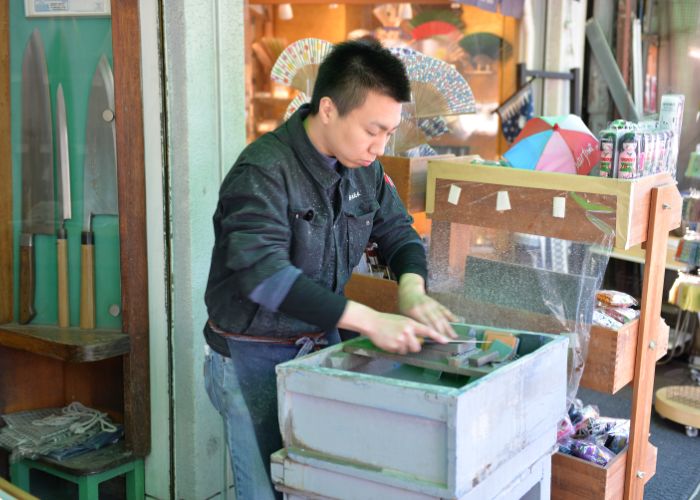 Hopefully, this post has given you a good introduction to the art of Japanese knives, and what makes them so highly sought-after. If you’re planning to get one of your own to level up your culinary skills and are wondering where to buy Japanese knives online, be sure to take a look at our product page. Happy cooking!

We strive to be as accurate as possible and keep up with the changing landscape of Japan’s food and travel industries. If you spot any inaccuracies, please send a report.
12
Click clap if you like this post
Ashley Owen
Ashley is a freelance travel writer from the UK who spent the last two years living in Japan, and is about to embark on her next adventure to New Zealand. She's always on the lookout for exciting new vegan treats wherever she goes!
SEE ALL POSTS
You may also be interested in
Culture