What to Eat in Hiroshima: The Peaceful City of Water

Situated to the south of the island of Honshu, Hiroshima now stands tall looking onto Hiroshima Bay, forever a symbol of the tragic bombing in 1945. Initially thought to be uninhabitable after the explosion, the beautiful city of Hiroshima as we know it today has been reborn, an amazing feat, just some 70 years after the bombing became one of the most harrowing memories in history.

Like many visitors, perhaps you're making a stop in Hiroshima to pay your respects at the A-Bomb Dome and the Peace Memorial Park, with a quick trip via Miyajima island for a deer selfie and a street food snack. Yet, if you stop and take a moment to appreciate the city, you’ll find that Hiroshima has its own heartbeat and soul. Welcomed by wide boulevards and the friendliest people, Hiroshima has blossomed into its own in previous years. A bustling scene downtown with restaurants and bars are built into the heart of Hiroshima’s own vibrant food culture. To help you discover Hiroshima through food, this is the ultimate guide to what to eat in Hiroshima and Miyajima island.

Six rivers flow through the city and down into Hiroshima Bay, and so Hiroshima is often referred to as “The City of Water.” A lot of famous dishes in Hiroshima developed from inspiration in Hiroshima Bay, where it was relied on to supply seafood and local ingredients. Food in Hiroshima also benefited from products and harvests feeding in from the greater Hiroshima prefectural area, where Hiroshima could borrow the best dishes developed in regional cities within the region.

What to Eat in Hiroshima

Here are some must-try Hiroshima specialties! 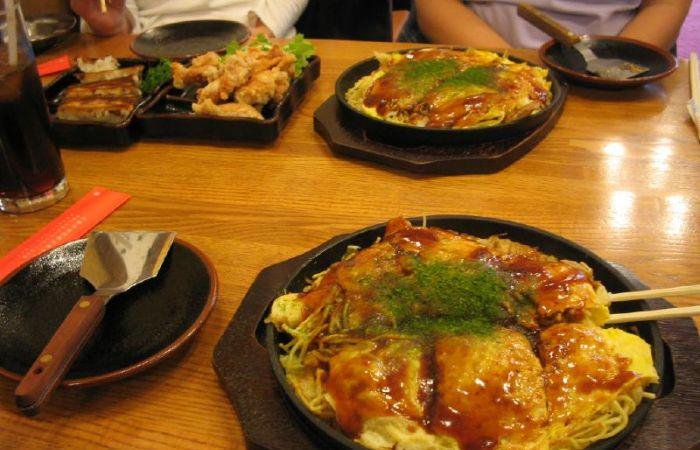 Hiroshima is the humble birthplace of the Hiroshima-style okonomiyaki, often simply called Hiroshima-yaki. This layered savory pancake grew out of the postwar years and has since gained popularity as a famous dish in the region. In stark contrast to the Osaka-style okonomiyaki, which has its batter and bits thoroughly mixed, Hiroshima okonomiyaki has the batter, eggs, meats, and cabbage individually layered on the pancake. More cabbage is traditionally used in Hiroshima than for Osaka okonomiyaki, and adding soba or udon noodles is common as well. You can easily find this local dish everywhere in the city, but the Okonomiyaki Village (Okonomiyaki-mura) in downtown Hiroshima has three floors of okonomiyaki madness with all sorts of toppings to round out how you like it.

Hiroshima supplies the rest of Japan with 60% of its oyster consumption as the top oyster-producing city, so it’s no wonder that kaki (oysters) are a must-eat when in Hiroshima. Oysters tend to be particularly divisive seafood, but if you can handle it, between October and March the oysters from Hiroshima are not only massive but also juicy and full of flavor. Six separate rivers run through the city to Hiroshima Bay, passing on the nutrients from the mountains of Chugoku to give the oysters their bulk and richness. Oyster lovers can have them fresh, grilled, deep-fried (kaki-furai), in a kaki-no-dote-nabe earthenware hot pot, or inside a mouthwatering slab of Hiroshima okonomiyaki. The best place to get them is at a kakiya, an oyster specialty shop. You’ll find many of them on the island of Miyajima, sitting off to the side in Hiroshima Bay, where you can have set meals of kaki or as a street food snack.

Lemons, you say? That’s right, lemons! A little-known fact about Hiroshima is that the surrounding prefecture is the main grower of lemons in Japan. Grown in the sunshine and mild climate caused by the nearby Seto Inland Sea, the vibrant color of the lemons is a sign of the nutrients and fresh flavor held within each fruit. They’ve got characteristically juicy flesh with a strong aroma, even the green lemons are eaten as a snack or used as a garnish in drinks.

Marked with a red stamp of approval, akashu, these high-grade lemons are quality assured. In the production of these Hiroshima lemons, they avoid using pesticides and preservatives, leaving the lemon’s fragrant skin safe to be eaten too, or grated and used as a spice. A fresh squeeze of lemon juice over a Hiroshima okonomiyaki is also a delicious use of the Hiroshima lemons, elevating the dish, while of course the area also produces a range of lemon-infused sakes and drinks. But of course, what a perfect match to squeeze a local lemon over a local oyster, freshly picked from Hiroshima Bay.

Salt water eel (anago) is the other seafood to be tried in Hiroshima. Not to be confused with unagi, which is a river eel, anago is known for having an extra soft texture. Taste the eel either grilled or in an anago-meshi, meaning rice bowl topped with eel. Gently smoked over charcoal and slightly sweetened with a hint of mirin seasoning and shoyu soy sauce, the flavors seep into the rice below. This dish is so famous that there’s even a Hiroshima bento box featuring anago and rice, especially handy if you don’t have time to queue at the popular stores (although fresh of course is optimal for your tastebuds). 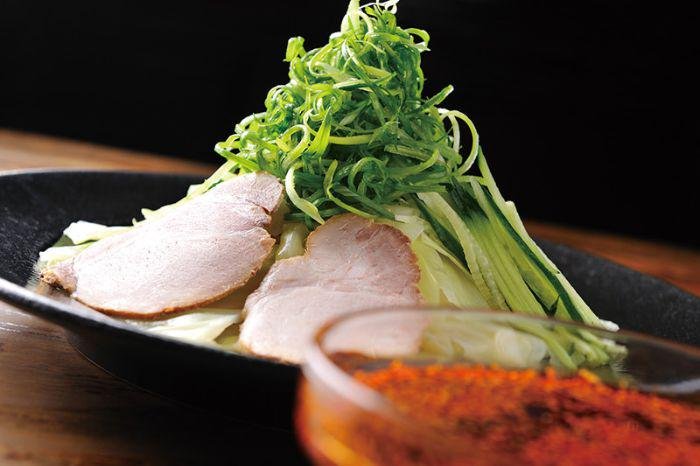 While you can get tsukemen all over Japan, tsukemen in Hiroshima is perfect if you’re a lover of spicy food. These noodles are really popular in Hiroshima and unique for being notoriously spicy. Hiroshima tsukemen noodles are generally served cold and dipped in a separate bowl of broth with the spice level of your choice. You can go hard on the pepper if you’re up to the challenge; this sesame-topped red soup is the Hiroshima noodle dish for those who can handle spicy food! 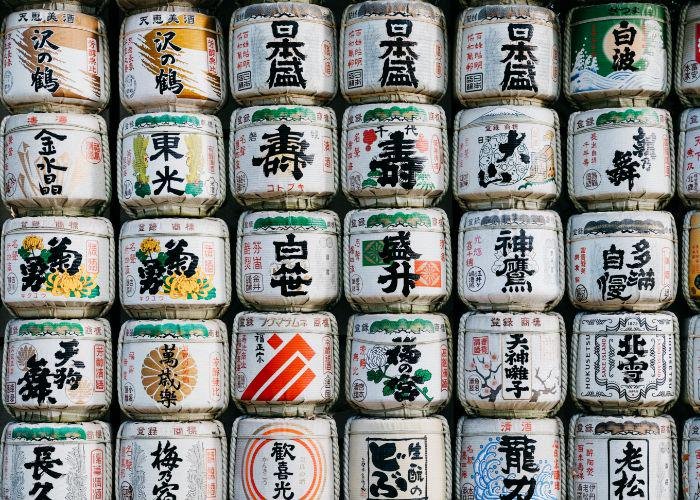 Hiroshima is proudly one of the top three ranking sake-producing cities, home to approximately 50 sake breweries which are busy creating some of the finest tipples in Japan. Sidling up close and personal next to Fushimi in Kyoto and Nada in Kobe, the Saijo sake district is Hiroshima’s hard-hitting player in the sake game, whose breweries collectively make up Hiroshima’s world-class “sake town.” Hiroshima hosts an annual Sake Festival each year in the fall, and is home to the National Research Institute of Brewing and Japan’s annual sake awards. Sake made in Hiroshima is meant to be richer and of course top quality, with different styles of sake made throughout the year, like new brews in spring, shinshu, and single-pasteurized sake in the fall, hiyaoroshi.

The famous ramen in Hiroshima is Onomichi Ramen, which originally comes from Onomichi, a small town to the east of Hiroshima Prefecture. An otherwise unsuspecting town, the picturesque city slopes and numerous temples in Onomichi have been used as filming locations for many period films and television dramas. Hiroshima was a bit sneaky, stealing some of Onomichi’s fame through its ramen, but nonetheless, it's hearty and it’s delicious. A bowl features fine, firm noodles inside a broth of soy sauce and dashi fish stock. This is finished off with a dollop of pork lard to enhance the flavor of the toppings including menma (bamboo shoots), chashu (grilled pork slices) and negi (green onions). In Hiroshima, the ingredients are made from local seafood caught from the Seto Inland Sea, connecting to Hiroshima Bay.

Usually sold dried, fresh koiwashi (baby sardines or anchovies) are one of the popular things to eat in Hiroshima. Koiwashi are delicious and versatile, another seafood to add to your Hiroshima food repertoire. Koiwashi can be grilled or eaten fresh as sashimi, or put into crunchy tempura dishes or tasty sushi. This local specialty is best to be had in Hiroshima, as the baby fish are delicate and otherwise tricky to eat at their freshest. 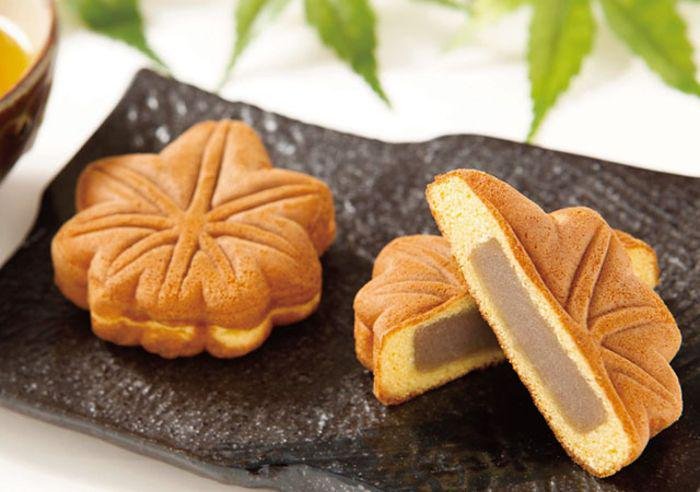 A momiji manju is a sweet bun in the shape of a Japanese maple leaf, and is one of the must-try snacks while in Hiroshima. It’s a local omiyage, a souvenir treat traditionally filled with red bean paste, to take home to your family as a gift commemorating your Hiroshima trip. It's a wagashi (Japanese sweet) you’ll actually find it at tourist destinations all over Japan, however, in Hiroshima momiji manju is particularly associated with being a sweet treat while you wander around Miyajima Island. This “shrine island,” a mere 10-minute ferry ride across Hiroshima Bay, is formally named Itsukushima, and is home to Itsukushima Shrine. Iconic for its “floating” torii gate rising from the waters of the Seto Inland Sea, Miyajima is a popular tourist destination, with deer roaming freely and street food on every sidewalk. Now available in flavors other than just anko red bean, pick up a momiji manju as a souvenir or a snack on your trip to Miyajima from Hiroshima.

Wobbly and pale, strips of sashimi konnyaku is a popular dish in Hiroshima, hailing from the city’s Yuki-cho area. Konnyaku is a kind of root vegetable, often used in Japanese cuisine. Processed into noodle form or manageable chunks, konnyaku tends to be speckled and gray, semi-transparent with a rubbery texture. Does it sound vaguely delicious yet? Well, the wild konnyaku roots grown in the Hiroshima area are fed with fresh flowing water thanks to the Chugoku Mountains. High-quality konnyaku from Hiroshima is often called yama-fugu, “mountain pufferfish,” referring to the konnyaku root’s mountainous origin and the processed konnyaku’s pufferfish-esque texture when finely sliced. Like regular fish sashimi, yama-fugu is eaten with wasabi and dipped in soy sauce. Yama-fugu is served chilled, and sometimes with vinegared miso instead of wasabi.

Japanese curry is popular throughout Japan, so it’s no surprise that it’s eaten every Friday for lunch in many units of the Maritime Self-Defense Force, or kaiji in Japanese. With the Maritime Forces close by in Hiroshima, Japanese curry has become popular with kaiji-kare sold in different flavors, commonly at souvenir shops. It comes in nifty pouches to take home with you and easily reheat for a delicious curry in your tummy any time. The city of Kure in Hiroshima Prefecture is known for having restaurants selling Kure-kaiji-kare, but in Hiroshima oyster curry or kaki-kare is the local variety. Topped with some local seafood, Japanese curry is a tasty and delicious dish in Hiroshima.

What to eat in Hiroshima is no longer a mystery as there’s so much diverse seafood and regional produce to try. Food in Hiroshima is heavily influenced by seafood from Hiroshima Bay as well as ingredients and dishes from cities in the greater Hiroshima Prefecture. Hiroshima has so many local foods on offer, while Miyajima Island also has delicious restaurants and street food to explore.

Have a taste for travel? Browse food experiences in Hiroshima or follow us on Instagram for the latest in Japanese food news!

We strive to be as accurate as possible and keep up with the changing landscape of Japan’s food and travel industries. If you spot any inaccuracies, please send a report.
0
Click clap if you like this post
Lucy Baker
Never not hungry, Lucy is an artist and foodie from Australia. You can find her hunting for the next delicious deal, documenting her food, or brunching. She lives firmly by the philosophy that food friends are the best of friends.
SEE ALL POSTS
You may also be interested in
Hiroshima