The Art of Hospitality at Komago: 3 Star Michelin Restaurant

The Art of Hospitality at Komago: 3 Star Michelin Restaurant

One of Hyogo Prefecture’s Michelin 3-star restaurants, Komago sits quietly on the periphery of Koyoen, nestled in the residential estate of Nishinomiya.

The mansion Komago resides in has been passed down through generations, and is currently in the hands of the third descendant, Kenichi Fujiwara, chef and owner of Komago. The restaurant is housed in a sukiya-zukuri teahouse, a traditional architectural style that connotes refinement, cultivated taste, and elegance. The teahouse was previously a Japanese inn where travelers could stop and rest as they traipsed through the north of Hyogo to visit hot springs, but Fujiwara has since transformed the inn into a restaurant and opened it officially as “Komago” in October 2002. 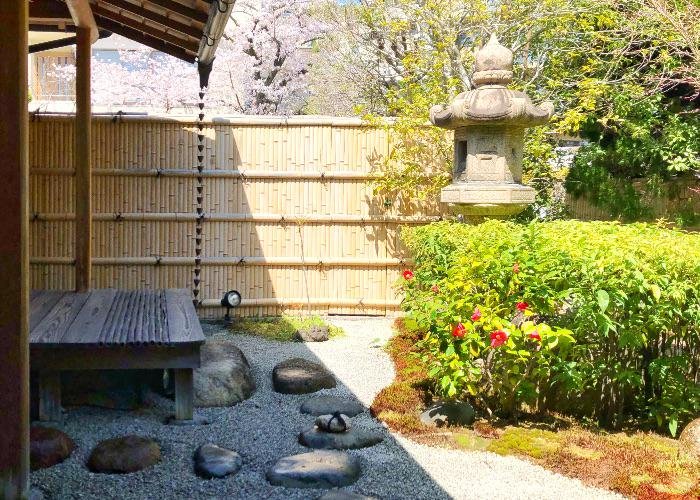 It is interesting that the kanji characters that make up Komago (子孙) literally translate to “posterity” or “offspring,” which is perhaps a nod to Komago’s dedication to tradition and heritage, demonstrated in the multiple elements that constitute Komago’s holistic kaiseki cuisine experience - the interior decorations, the atmosphere of the restaurant, and the dishes that are presented.

The restaurant itself has a rustic layout. Guests are first greeted by a traditional Japanese garden separated from the dining area by only a glass panel, which seems to blend the dining area and the garden together to allow guests to feel almost as if they were dining in the tranquil garden itself. A modest dining area welcomes diners, its interior minimally but elegantly decorated by natural materials, with wooden columns and floor-to-ceiling shelves furnishing the room. Scrolls of calligraphy and carefully arranged flowers (ikebana) adorn the room as well, complementing the wooden beams around them and the wooden weaves of the ceiling.

The natural aesthetic of sukiya-zukuri is highly understated in modern times, and Komago seeks to bring that aesthetic back to the forefront, to preserve the delicate charm of this tradition for posterity, as its namesake suggests. The quality of tranquility that welcomes one upon entering Komago is later translated into its kaiseki cuisine as well.

A meal here will take well over 2-hours, as service is impeccable and unhurried. Take time to slowly savor not just the delicious cuisine presented, but to also embrace Komago’s hospitality that encompasses all the elements of dining, to truly make your 3 Michelin star dining experience at Komago, a leisurely and an unforgettable one.

Different types of kaiseki cuisine courses are offered at Komago, ranging from ¥10,000 to ¥35,000. Komago takes pride in only using the freshest locally sourced ingredients, harvested at their peak, to ensure superior quality. Dishes are also presented elegantly and simply, to draw focus to the natural, authentic flavors of each ingredient.

Showcased below is Komago’s kaiseki cuisine course, Tsuki 月, in spring. Since it was at the height of the sakura season, the running motif through the kaiseki menu was of course, cherry blossoms. 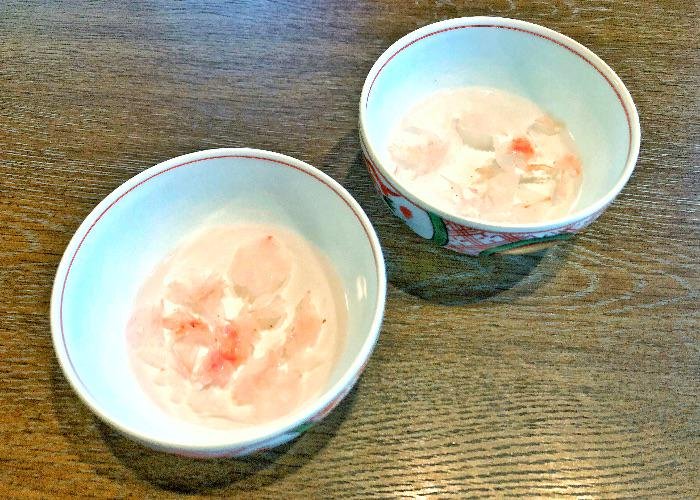 Diners are first presented with a warm tea upon settling down at their respective tables. This season, floating atop a pale white tea were pink translucent cherry blossom petals, immediately flaunting the sakura-centric theme that would be carried through the courses. 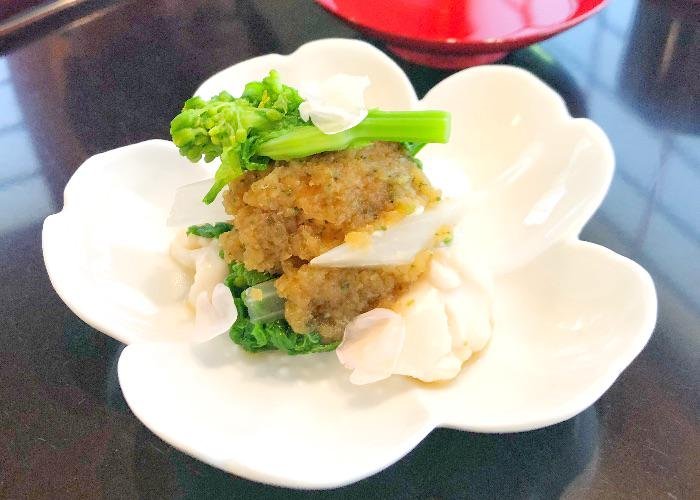 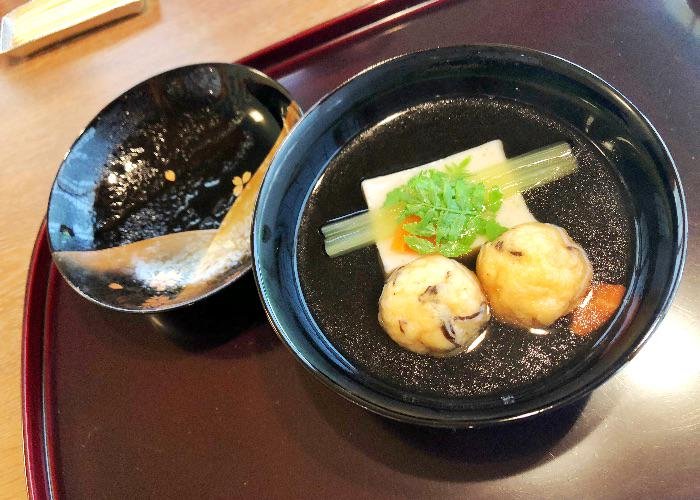 Appetizers were light and delicious, and the suimono, a light-bodied appetizing soup, helped stimulate our taste buds for what was to come. Edible flowers, as we would soon find out, would be lavishly used across the whole course. 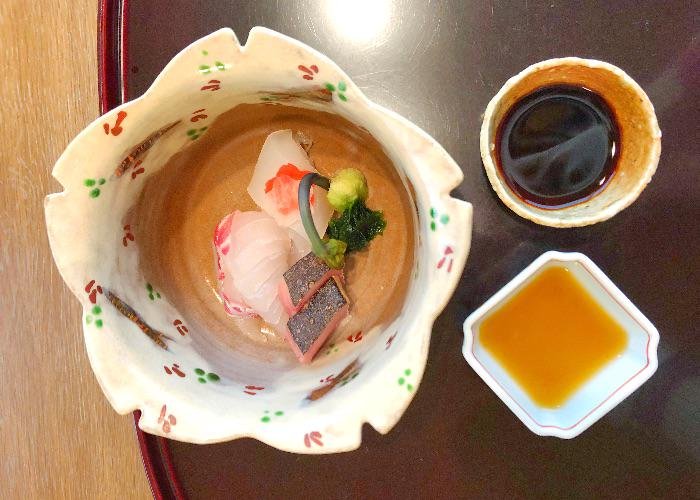 A petite bowl of sashimi was introduced after the appetizers, with pieces that have been skillfully scored and plated. Homemade sauces were served on the side, providing diners with the choice between a strong shoyu sashimi sauce or a sweet vinaigrette. 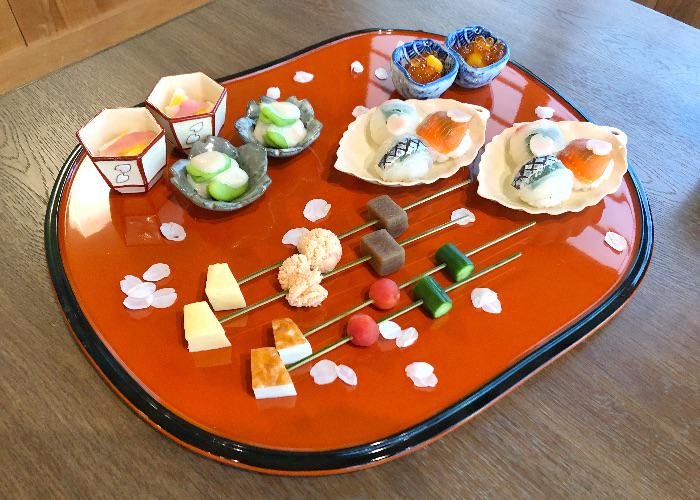 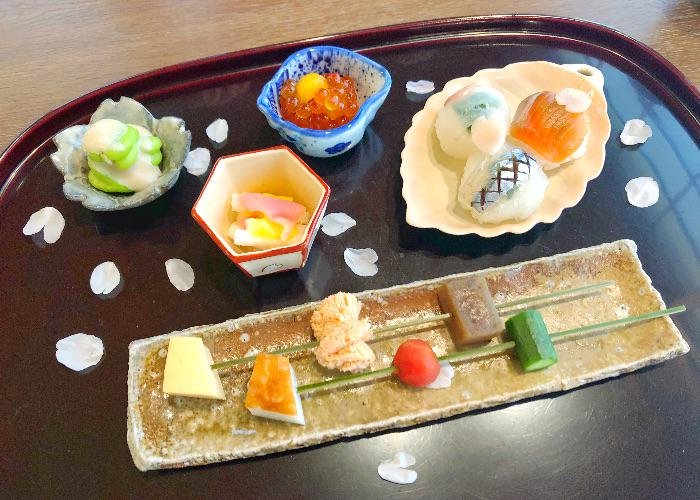 The showstopper that afternoon was, without a doubt, a beautifully ornamented platter that came in after we had a short break from the third course.

The small dishes clustered on a lacquered tray was a sight to behold and a true feast for both our eyes and palettes. The flavors were light and delicate, and used some of the prettiest dishware to contain each individual dish. Each individual item is served to each diner individually, after the presentation of the platter. 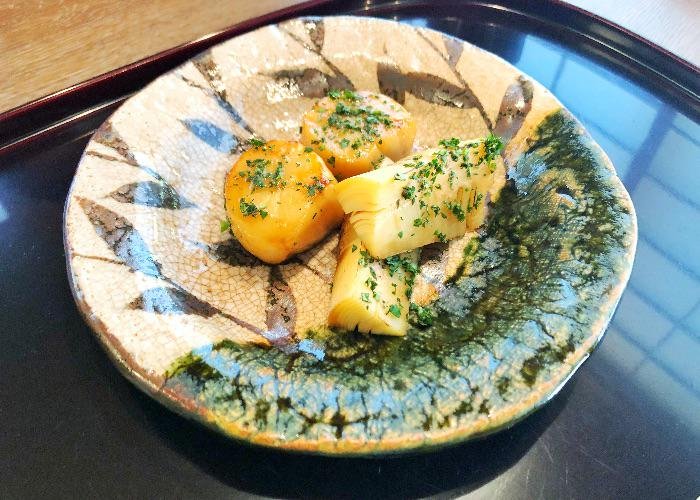 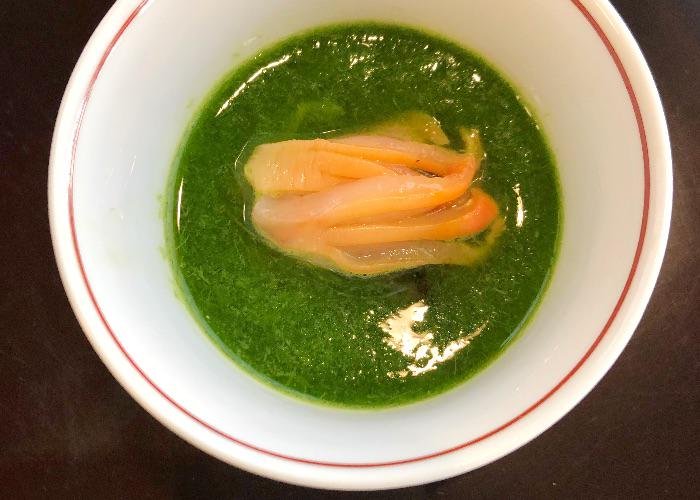 The dishes that followed after, leaned more heavily towards the savory end, with delectable flavors. They likewise feature cherry blossoms through a variety of means - dishware used for service, artfully arranged petals across the dishes themselves, right down to how each article of food was laid out across each diner’s plate, and truly reflects how well-thought out and composed the entire kaiseki course is. 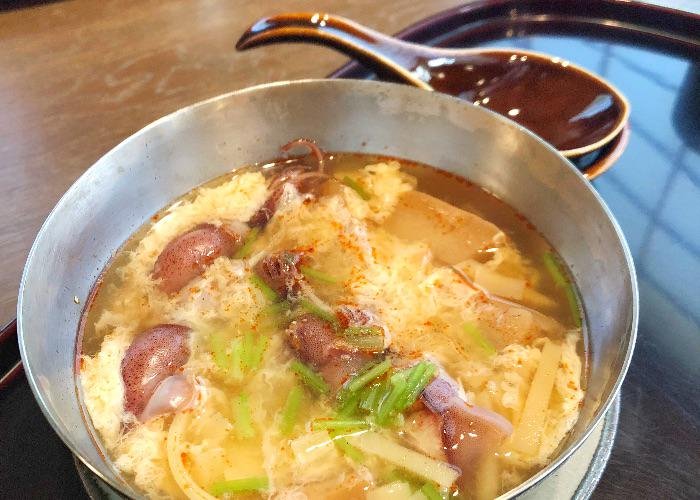 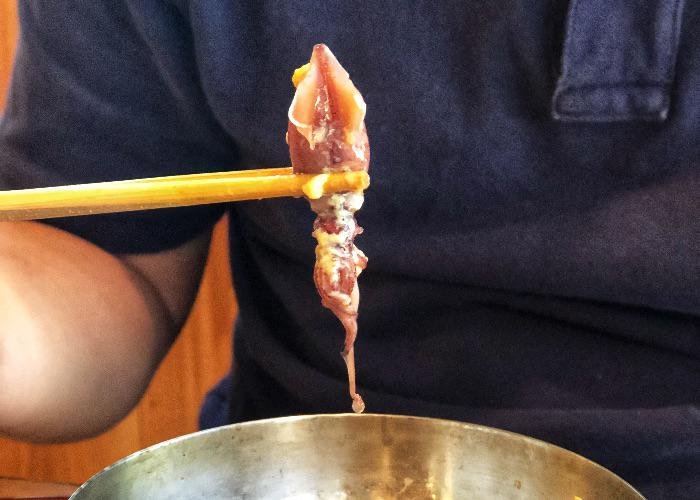 In line with what Japan offers as fresh produce during spring, one of the last few courses we had was a soupy bowl of hotaru-ika. A seasonal delicacy available only during the brief period between early and late spring, hotaru-iku is also known as firefly squid, typically said to be heavy in taste. However, Komago has chosen to present its hotaru-iku dish in an egg-broth, which resulted in a sweet and savory mouthful with every bite. 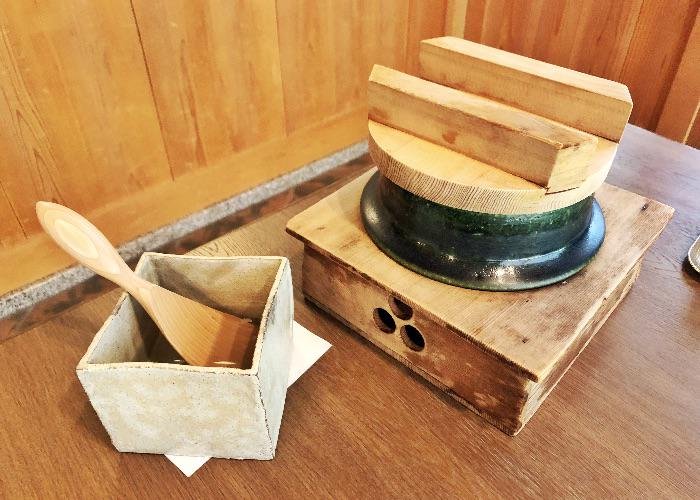 Rice is typically served at the end of a kaiseki course, and Komago’s gohan course is served in the earthen clay pot it was cooked in. While waiting for the rice to be cooked, a lightly simmered broth is presented to cleanse the diners’ palates before the rice dish. The rice was later served with a selection of pickled vegetables and miso soup. 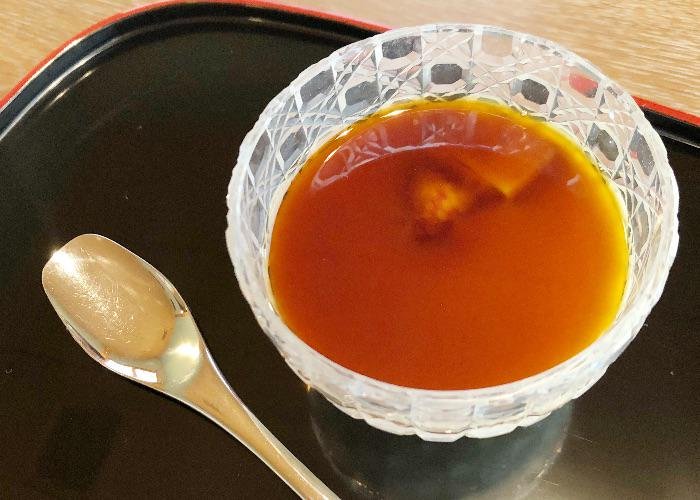 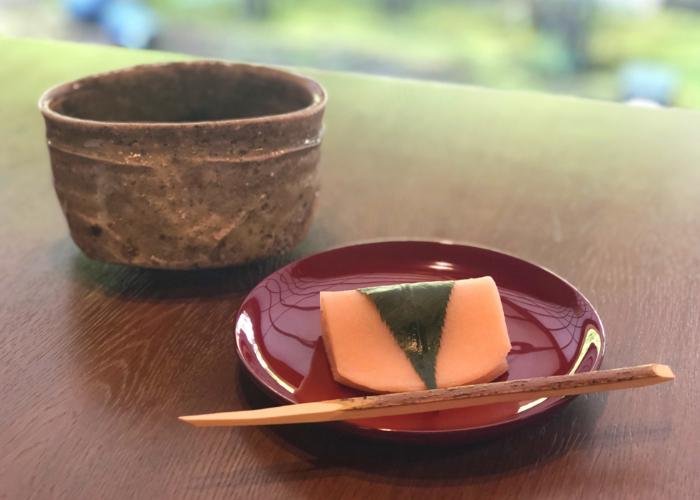 Any meal would not be complete without dessert, and Komago was sweet enough to wrap up the full kaiseki course with not one, but two desserts. The first was a perfectly torched crème brûlée which, when tucked into, had a satisfying crunch that came from the crisped caramelized sugar layer on top. A hot cup of ocha (Japanese tea) with a sweet mochi confection, tinted a sakura pink, brought to a close the sakura-themed meal, ensuring that the meal concluded on a sweet and comforting note.

Overall, Komago’s dishes are served in a manner which expresses careful thought and consideration. The avoidance of showy or ostentatious presentation allowed them to focus on the high-quality ingredients they serve, complemented by the use of skillfully crafted traditional Japanese earthenware and dishware. Service was also incredibly meticulous, right down to the timing the dishes were served, to ensure that diners could take time to enjoy the food and the moment, reinforcing once again, the art of hospitality that Komago has down pat.

This is truly an ichigo-ichi, a once in a lifetime experience that will open your eyes to the Japanese concept of washoku, through Komago’s kaiseki cuisine.

Want to try the traditional Japanese multi-course meal for yourself? Browse kaiseki experiences in Japan! 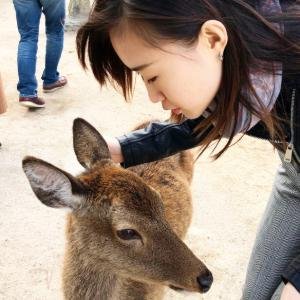 Sue Gan
A closet bibliophile, when she’s not on the hunt for delicious grub, Sue takes armchair expeditions to feed the bookworm eating at her soul.