Where to Eat in Yanaka Ginza

Relish in the nostalgic charm of Tokyo as you walk through the streets of Yanaka Ginza, a shopping district that has preserved the glory of old Tokyo in the midst of the city's ever-evolving landscape. Yanaka Ginza is a peaceful and feline-friendly haven with a cherry blossom-lined cemetery that serves as a popular hanami (cherry blossom viewing) spot, with numerous family-run shops touting homeware, tea, traditional Japanese snacks, and street food. The shotengai (traditional shopping street) of Yanaka Ginza is also central to the local community during the summer festival season in August, coming alive as young and old alike come together to celebrate. 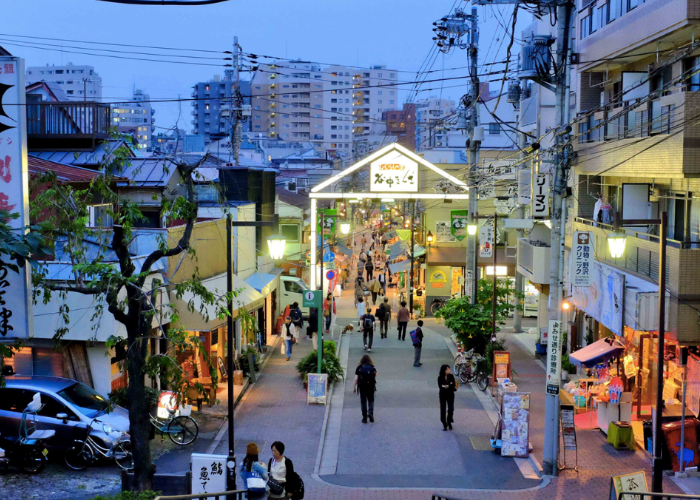 Let's walk down memory lane and delight in the nostalgic beauty of this old shopping street. The word "Ginza" in Yanaka Ginza was derived from the bustling and luxurious shopping district of Tokyo. However, Yanaka Ginza's charisma is embodied by the small stores that sell traditional and artisanal Japanese accessories, treats, and souvenirs. Read on to discover where to eat in Yanaka Ginza! 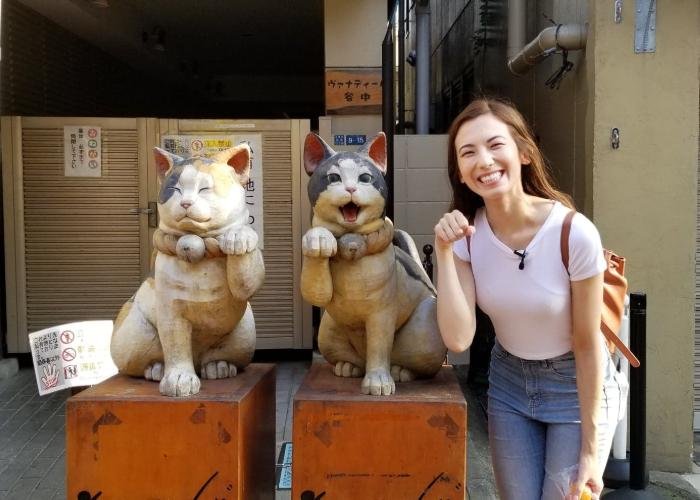 Where to Eat in Yanaka Ginza

Here are some fantastic places to eat in the charming Yanaka Ginza neighborhood.

Shopping can get a tad tiring and what better way to replenish your energy than by getting some grub sold along Yanaka Ginza. Pancakes are a popular food in Yanaka Ginza, however, contrary to conventional pancakes, many cakes sold here are on the savory, rather than sweet, side. For some ikiyaki (grilled squid pancakes) visit Iyaki Yakiya, where you can add meat or cheese to your order of ikiyaki, for ¥200 more. They also sell unique ika senbei (squid rice crackers) and beer. 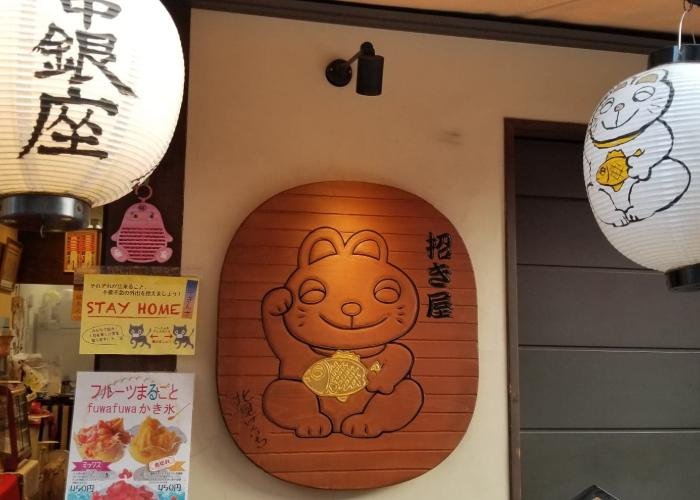 If squid isn't your thing and you're in the mood for something a little bit closer to the Western pancake, head on to Manekiya for taiyaki, sweet red bean-filled pancakes in the shape of fish. Since Yanaka Ginza is famous for cats, Manekiya also makes these sweet Japanese treats in the shape of cats! If you're not into the traditional red bean filling, you can order custard cream or matcha green tea-flavors. 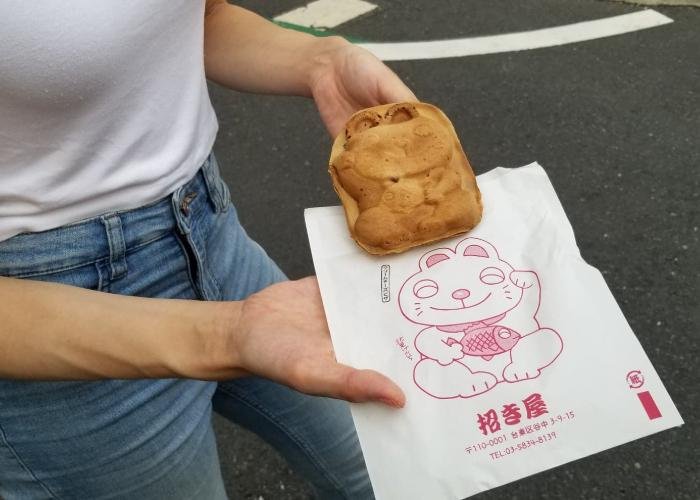 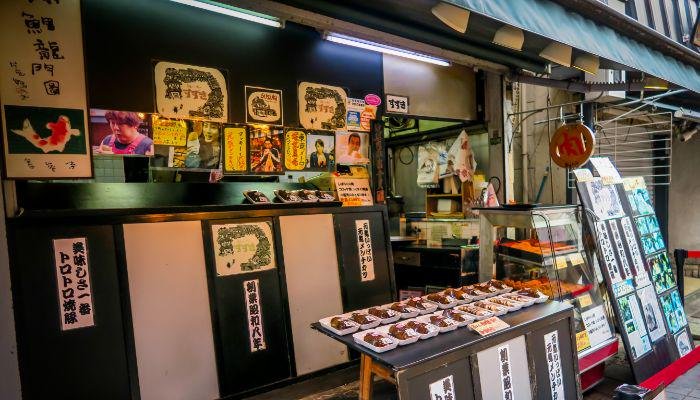 To say that Niku no Suzuki's menchi katsu are famous is an understatement. With television appearances, famous celebrity customers, and lines down the street, Niku no Suzuki is an institution. For the uninitiated, menchi katsu is a meat patty (usually pork or beef) that is breaded and deep fried, beautifully crispy on the outside but with moist, meaty goodness inside. At Niku no Suzuki, the specialty is their Genki Menchi Katsu, which is made with a mix of Japanese and Australian beef. They also make korokke, deep-fried potato croquettes.

Cat-tail doughnut?! Classic Yanaka Ginza. At Yanaka Shipoya, you can get tasty doughnuts shaped like cat's tails. But don't worry, no cats were harmed in the making of their doughnuts. Yanaka Shipoya's specialty cat-tail doughnuts are made with white chocolate and black cocoa to give those distinct stripes. They also sell over flavor variations, which are popular among people of all ages. 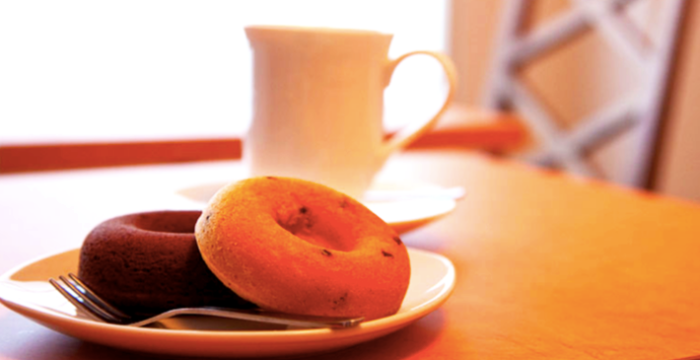 Health conscious folks might wonder where to eat in Yanaka Ginza. Don't worry, you can still enjoy your doughnuts at Yanakamanten Doughnut shop, which sells baked doughnuts rather than the typical oil-fried variant. They are not overwhelmingly sweet and have only a moderate amount of sugar. Tea lovers should try their matcha green tea doughnut! 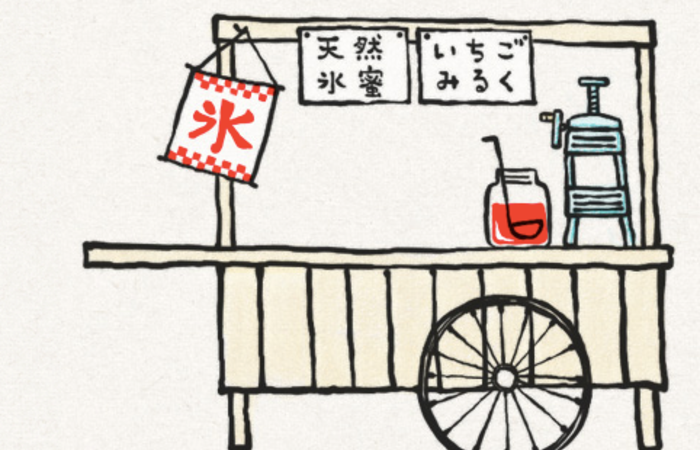 To beat the heat, why not have a bowl of Himitsudo's kakigori (shaved ice). Open all year round, even in winter, this dessert place is such a local favorite that you might have to spend a few hours in line to get a taste of this authentic Japanese treat. In fact, their popular Himitsudo Ichigo Milk Kakigori (strawberry milk shaved ice) is an exclusive winter flavor that is in high demand every year. Himitsudo's kakigori is made from natural ice from Mitsuboshi Himuro in Nikko, which is cut using traditional methods. Fluffy and refreshing, their shaved ice is doused with homemade syrup. 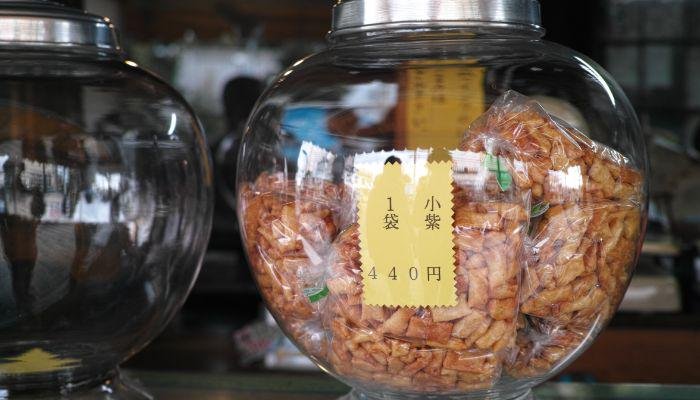 Yanaka Ginza is also home to traditional Japanese snack shops. For a taste of senbei, or Japanese rice crackers, head on over to Yanaka Senbei, a local shop which has been making senbei for over 100 years! Offering traditional rice crackers and a retro feel, stop by this little shop and try the variety of senbei they offer. Yanaka Ginza is also home to a few other traditional rice cracker shops, so you can try a wide variety! Within the modern hustle and bustle of Tokyo lies Yanaka Ginza, a sweet spot of Edo heritage that encapsulates deeply-rooted Japanese traditions. This old-school vibe, along with its artisanal and long-established arts, crafts, and food offerings, adds to the charming appeal of Yanaka Ginza. The food here also reflects the long history of Japan, and Yanaka Ginza is a wonderful place to indulge in your favorite Japanese street food. Now that your curiosity has been satisfied and you know where to eat in Yanaka Ginza, go forth and taste it all.

Craving Japanese street food? Tag along with Shizuka as she eats her way through Ameya Yokocho in Ueno!

We strive to be as accurate as possible and keep up with the changing landscape of Japan’s food and travel industries. If you spot any inaccuracies, please send a report.
6
Click clap if you like this post
Aleli Dorado
Aleli is a wanderlust whose main itinerary is to culture soak in the places that she sets foot on, sinking her teeth in the gustatory offerings that the place has to offer and knowing the story behind it. Food for her is a marriage of the sights, sounds, smells, and tastes of the rich history of every city she explores and uses the pen as her tool to share to the world each unique experience she unravels.
SEE ALL POSTS
You may also be interested in
Tokyo