As I turned the corner of a quiet street in the unassuming neighborhood of Ōtsuka, I was already able to see a queue of people about fifty meters ahead standing outside the understated Nakiryu ramen shop. I arrived at 11:30 am for opening and, after enquiring about which end to join, took my place in the orderly queue of tourists and suited salarymen alike. By this time the queue was already on the other side of the road with about twenty people ahead, with the first ten customers having taken their seats inside. While I was standing in the queue I felt very in-the-know, like I was queueing for something exclusive and secretive which, I guess to some extent, was correct.

Nakiryu was awarded a Michelin star in 2017 still holds onto its star in the 2019 Michelin Guide. Nakiryu translates to “crying dragon” and it’s most known for serving the bright red tantanmen ramen. The restaurant offers four main ramen choices; spicy-sour ramen (tantanmen ramen), a light soy sauce-based ramen (shoyu ramen), salt-based ramen (shio ramen), and dipping noodles (tsukemen ramen). The tantanmen ramen is a type of Japanese ramen based on the Chinese dandanmian noodles that originate from the Sichuan Province and uses the mouth-numbing Sichuan chili peppers. The Japanese version is made with rayu (chili oil), red pepper, and toasted sesame seed. Admittedly, it was my first time trying tantanmen ramen, but as a lover of spice, it sounded like the perfect choice for me.

I was prepared for having to wait at least an hour, so I bought a book with me to help pass the time on the slightly chilly overcast Wednesday morning. An hour and a half passed and by 1 pm I was at the front of the queue, next to go in. Once you cross to the shorter queue, one of the chefs comes out to give you the menu so that you can decide what you’re ordering before reaching the vending machine. The staff keeps a close eye on how many people are in the queue, coming out to note down how many in each party so that they can let people know when the day’s stock runs out which often happens before close, due to their popularity. The closer to the door you get, the more you can smell the sweet-salty, spiced air that fills the shop with your anticipation increasing every time someone leaves, as you become one step closer. 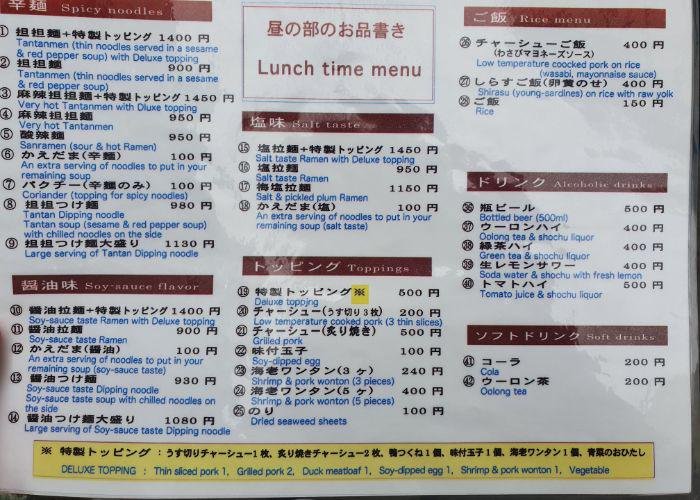 At 1:07 pm I placed my order of Very Hot Tantanmen at the vending machine, took a seat in one of the ten comfy wooden chairs behind the counter facing the kitchen, and eagerly waited for my bowl of ramen. The interior of Nakiryu is simple and modest with white walls, exposed pipes, and a shiny mahogany-colored countertop. Country renditions of classic rock songs such as Livin’ on a Prayer and Paradise City were played in the background, which I thought to be a slightly unusual and unexpected choice. The open kitchen allows you to watch the four chefs darting around, perfectly in sync, preparing customer's orders. After a short wait, my steaming bowl of ramen was ready. 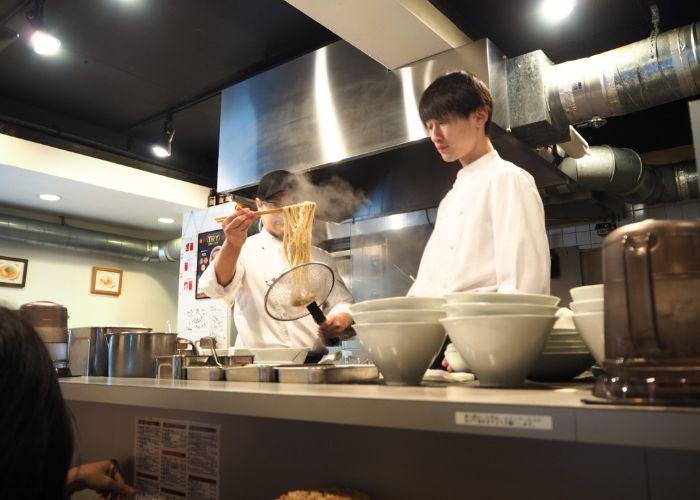 As I lowered the bowl down to me, the sour and spicy smell filled my nose. The presentation was auspiciously orange in color, looking like the inside of a volcano with the frothy chili oil orange broth and a mountain of rich-looking minced pork generously covered with deep red chili powder. There were flecks of white spring onion and peanut floating around with the thin angel-hair noodles just peeking above the surface. 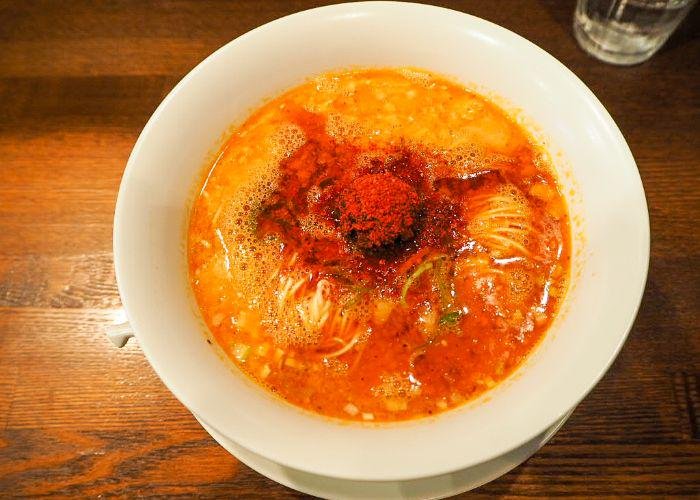 My initial sip of broth without mixing it all together was a whole new explosion of flavor for me, which I had never experienced before. It was a tangy sweet and sour nutty sip with a small hint of spice. After mixing all the ingredients, I took another sip which was far richer in taste thanks to the dense meaty flavor of the dark minced pork. Despite the small portion of pork, it packed a hefty perfectly seasoned punch, tasting more like beef than pork. The sesame brought a deep nutty aroma that was complemented by the lightness of the soy milk. The aftertaste was one filled with ginger and garlic from the pork and a hint of sweetness from an ingredient that was similar in taste to paprika, but I couldn’t quite work it out what it was from.

Initially, I was excited by the promising bold orangey-red color of the broth, expecting it to be extra spicy as the “very hot” name implied. However, disappointingly, the spice level was a lot milder than expected. It seemed that in true Japanese spice level style, it was more of a medium spice. It may be very hot to those who can’t handle their spice, but to those who can, it’s fairly underwhelming with most of the heat staying in the mouth rather than moving down to the soul, not even causing a sweat or a runny nose. There was a whisper of mouth-numbing spice, but nowhere near as much as I was expecting. 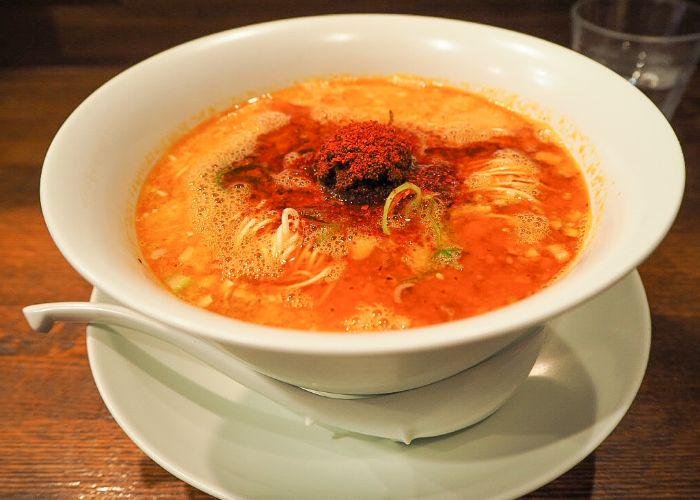 Now onto the noodles. I have to say that the noodles are what saved this dish for me. You can really tell that they are handmade in house and fresh with a wheaten aroma. They were so delicate, and light yet perfectly cooked al dente, quite the triumph for noodles that slender. They are thin and straight, the type that you typically get with tonkotsu-style ramen. For those who like their noodles extra firm, they might be a little soft for your taste, but to me, they were perfect and some of the best, if not the best noodles I have ever had, second only to freshly made angel-haired spaghetti that I had at a three Michelin-starred restaurant in Italy. I cannot emphasize how perfect these noodles were. They were so perfect that I had to order a kae-dama (extra portion) to indulge my gluttony which arrived covered in a generous splash of chili oil. The broth clung onto every strand and served as the perfect vessel to usher spice and flavor into your mouth lightly covered in specks of chili and herbs. 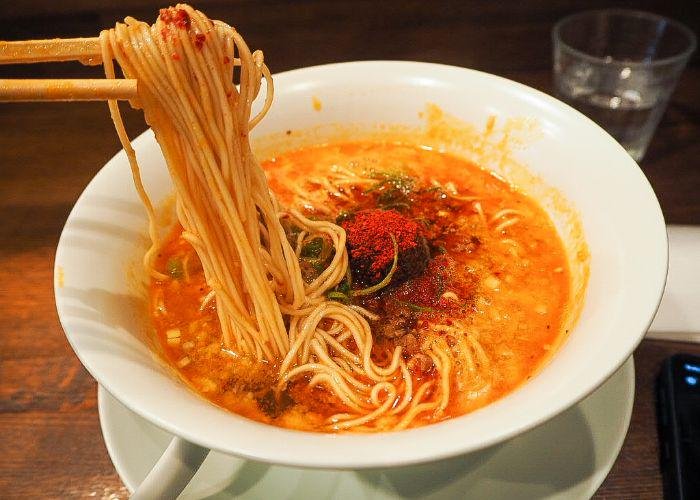 All in all, in my opinion, the noodles are what deserves the Michelin star. The tantanmen broth was slightly disappointing from what I was expecting and became very sickly towards the end, so much so, that I couldn’t finish it. However, Nakiryu is one of the most reasonably priced Michelin-starred restaurants out there. The total price of what I ordered was ¥1,050 which is an incredibly decent price for a Michelin-starred meal in Tokyo, and the portion sizes are pretty big. I would recommend a visit if you have a spare couple of hours, if not just to taste the heavenly noodles for yourself. If I were to go again, I would like to try out their light shoyu ramen and maybe add some extra toppings.

You are only allowed one bowl of ramen per person, so choose wisely.

Try and go on a weekday to avoid huge queues.

Check the weather before and dress accordingly. You most likely will be waiting over an hour standing still exposed to the elements with no shelter, so be prepared.

Add toppings to your dish! If you get the bowl without the additional toppings it doesn’t come with very much, just a refined scoop of minced pork.

Check out other Michelin-starred meals that won’t break the bank in Affordable Michelin-Starred Restaurants in Tokyo and subscribe to Japan by Food on YouTube!