A Beginner’s Guide to Japanese Seaweed

Seaweed is an integral component of Japanese cuisine. It’s a versatile and flavorsome ingredient that’s used in all sorts of dishes, including high-end sushi, hearty ramen broth, on-the-go snacks, and summery salads. Thanks to its high levels of key nutrients, Japanese seaweed is also greatly valued for its wealth of health benefits.

There are actually many different types of seaweed used in Japanese food, ranging from the crisp dried seaweed sheets you’ll find wrapped around onigiri rice balls to delicate powdered varieties used as seasonings. But don’t worry if you can’t tell your kombu from your wakame! Our beginner’s guide to Japanese seaweed will go over everything you need to know about this delicious and nutritious aspect of the country’s food scene. So, let’s dive in! 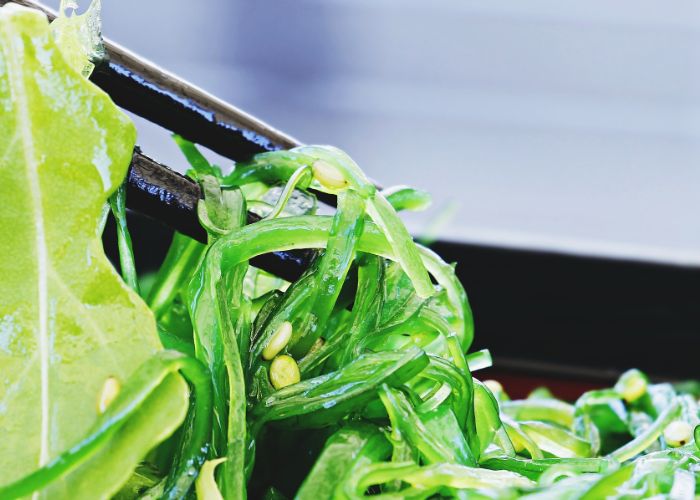 Nori is probably the variety of seaweed that people outside of Japan are most familiar with, because (as we’ll see below) it’s commonly used to wrap onigiri and sushi, as a topping for bowls of ramen, and as a condiment with many other dishes. However, nori is just one of many different types of Japanese seaweed, each of which has its own unique texture, flavor and appearance. This is what makes seaweed such a diverse and versatile part of Japanese cooking. 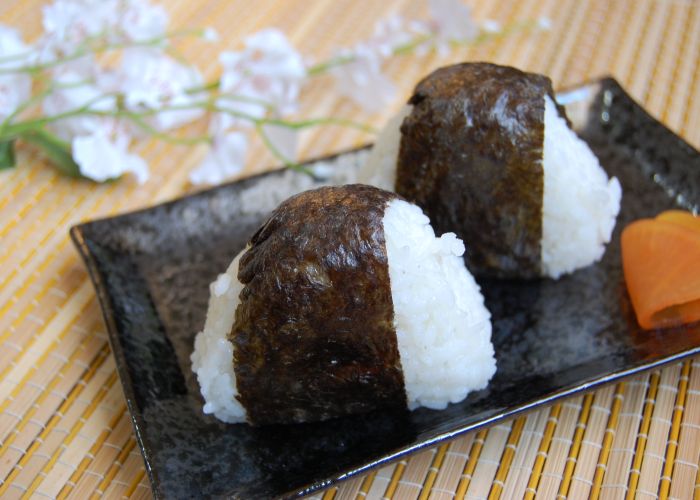 What is Japanese seaweed called?

So, if it’s not all ‘nori’, what is edible Japanese seaweed called? Well, the general Japanese word for seaweed is kaisō (海藻), but each type has its own name. We’ll go through the most common varieties below so that you know what to expect! Seaweed has been an important part of Japanese cuisine for hundreds if not thousands of years and can be either harvested from where it naturally grows or deliberately cultivated. How is Japanese seaweed made? This also depends on the type, because they grow in different locations and can be eaten both fresh and dried. 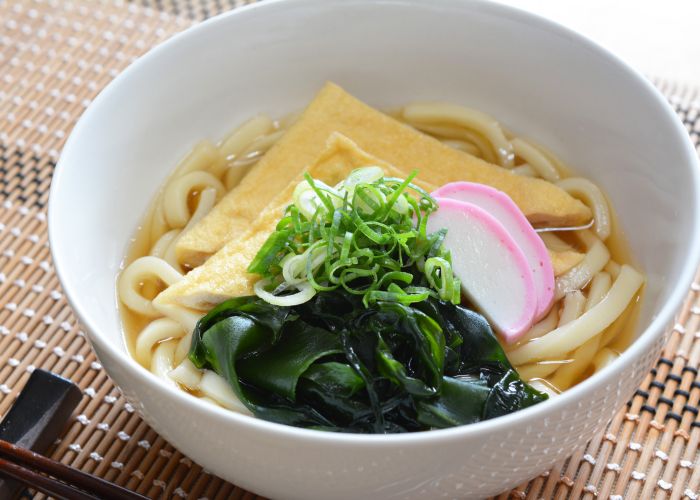 Seaweed can be broadly divided into three main categories: red macroalgae, green macroalgae and brown macroalgae. There are many different species within each, including several that feature prominently in Japanese cuisine. Here are 10 of the most common varieties of Japanese seaweed you’re likely to encounter:

Nori is the instantly-recognizable dried seaweed that’s wrapped around onigiri and certain types of sushi. It’s made in a similar process to paper, with the seaweed being cut up into fine pieces after harvesting and then pressed into very thin sheets to be dried and roasted. Thin strips are often served as a condiment or ramen topping, and you’ll also find shredded nori (kizami nori) used as a garnish on all sorts of dishes. 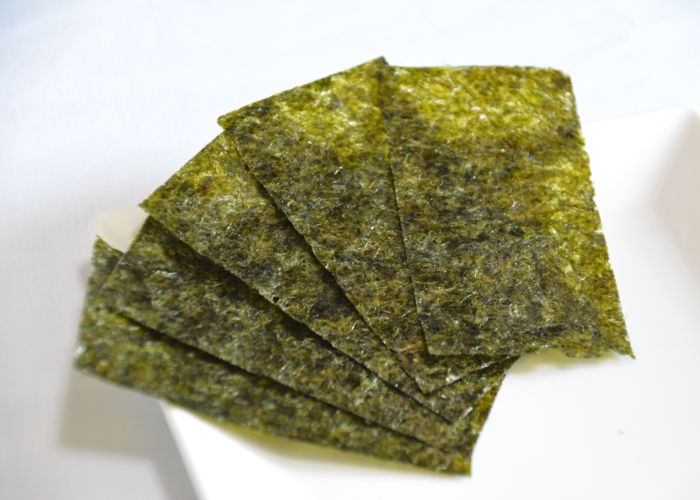 Aonori, or green laver, is a type of dried seaweed that’s been ground up into a fine powder. It’s really easy to use in cooking, because all you need to do is sprinkle it on top of savory dishes such as yakisoba and okonomiyaki as a garnish. The vibrant green color, umami taste and fragrant aroma will definitely enhance your meal! 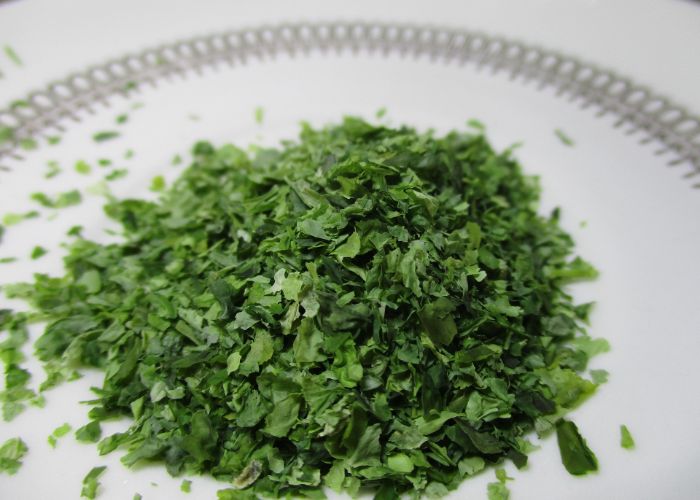 With broad fronds and a deep green color, wakame is a common ingredient in miso soup and side dishes such as seaweed salad. It has a mild umami taste with a hint of sweetness, and a slightly chewy satiny texture.

Wakame is often sold dried, and you can rehydrate it by soaking it in water before cooking with it. You’ll find that it expands quite a bit, so take care not to use too much! 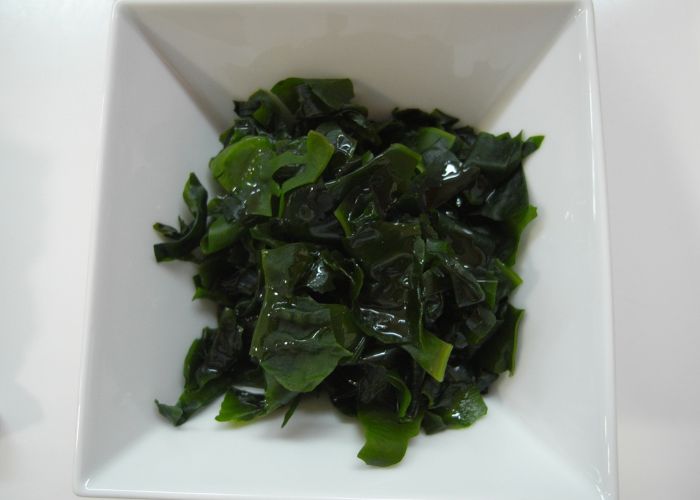 This short, thin, dark brown seaweed grows along rocky coastlines, and in its dried form looks a little bit like black tea leaves. Hijiki has a subtle earthy, nutty flavor, and should be rehydrated before cooking. One of the most common seaweed recipes featuring it is hijiki no nimono, a seaweed salad in which hijiki is simmered in soy sauce, mirin and dashi, along with thin strips of carrot and deep-fried tofu (aburaage). 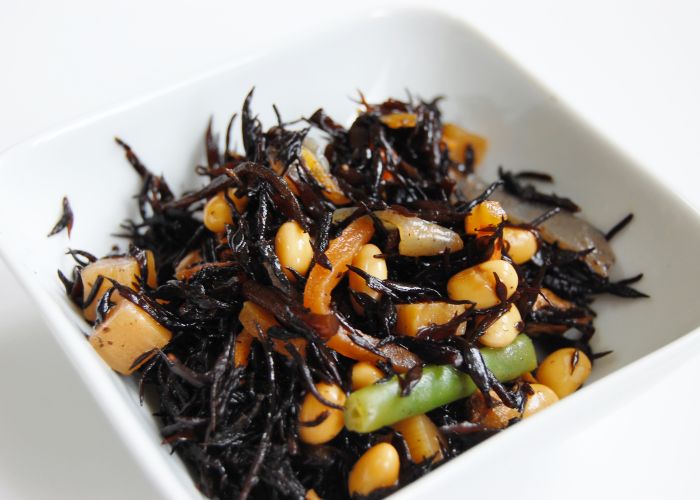 Also known as kelp, the thick strands of kombu seaweed are dark green with a leathery texture and rich umami flavor. It’s mainly cultivated in the northern prefecture of Hokkaido, and is one of the principal ingredients in Japan’s famous dashi soup stock. Kombu can also be sliced up and simmered in mirin, sugar and soy sauce, to be served as an accompaniment to rice or used as the filling for a rice ball. It's even possible to drink it as a tea! 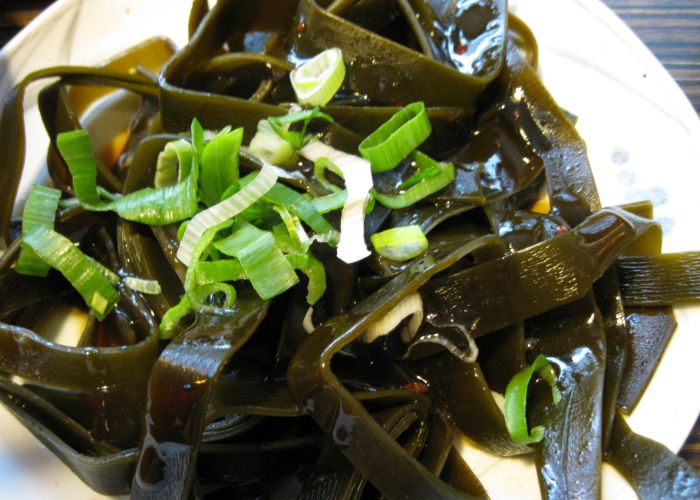 Mozuku is a brown type of seaweed that grows in Japan’s southernmost prefecture of Okinawa. It has a mild flavor, slightly slimy texture, and long thin leaf strands that look a bit like noodles. You can enjoy mozuku raw or cooked, and it’s often served seasoned with vinegar as a side dish. 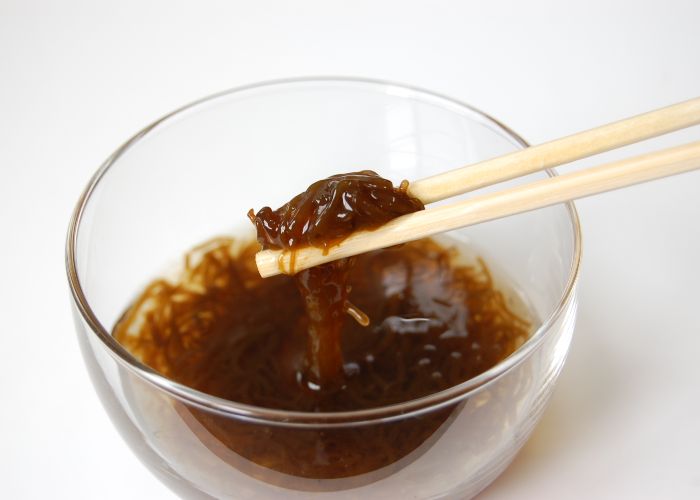 Mekabu is the flowering part of the plant that wakame comes from, but has a slimy texture that’s more similar to mozuku. It consists of soft and thin green strands, and goes well in a seaweed salad or paired with ponzu (a citrus and soy sauce dressing) as a side dish. 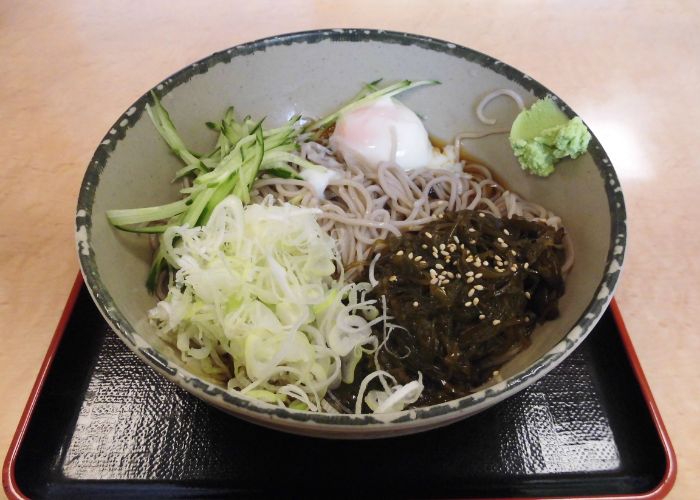 Literally translated as ‘sea grapes’, umi budou is a true Okinawan specialty. The stems are covered in tiny green spheres that look a little bit like caviar, and burst pleasantly in your mouth to release a hit of salty goodness. Umi budou is best served fresh, and seasoned with a touch of vinegar, ponzu, or soy sauce. 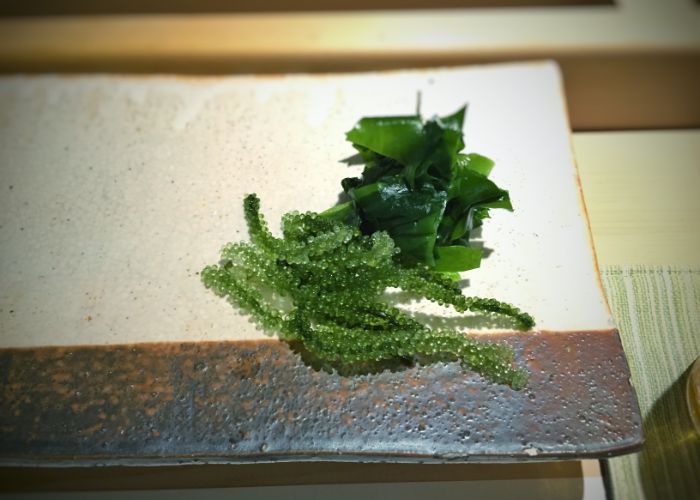 Similar to hijiki, arame is dark in color and comes in thin strips. It has a delicate and slightly sweet flavor that makes it perfect for seaweed newbies, and can be added to all kinds of dishes from salads to noodles or stir-fries. 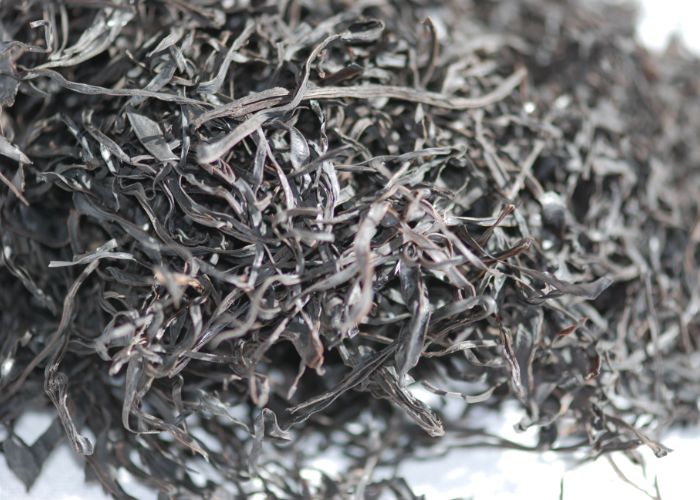 Kanten, also known as agar agar, is a little different to the other types of seaweed on this list because it’s flavorless and used a thickening or gelling agent rather than eaten on its own. It’s a vegan-friendly alternative to gelatin, and can be found in traditional Japanese desserts and wagashi sweets such as yokan and anmitsu. 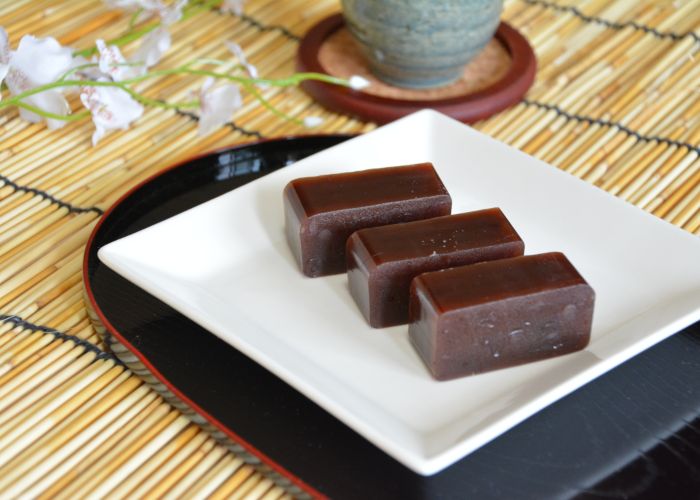 The health benefits of Japanese seaweed

In addition to its rich flavor, seaweed is a highly nutritious ingredient to include in your diet and offers a wealth of potential health benefits. This is because it’s a great source of fiber as well as containing plenty of key vitamins and minerals, including iodine, the amino acid tyrosine, and antioxidants. So, exactly what is Japanese seaweed good for? Here are just some of the many possible ways that eating seaweed benefits you:

In Japan you’ll find plenty of seaweed in almost every supermarket you visit, however if you live overseas you can order lots of different types of dried seaweed online instead.

Including it in your cooking is a fantastic way to add an extra depth of flavor and make your Japanese dishes more authentic. There are loads of delicious seaweed recipes you can try, from soups to seaweed salad, so you’re sure to find something that tantalizes your taste buds! 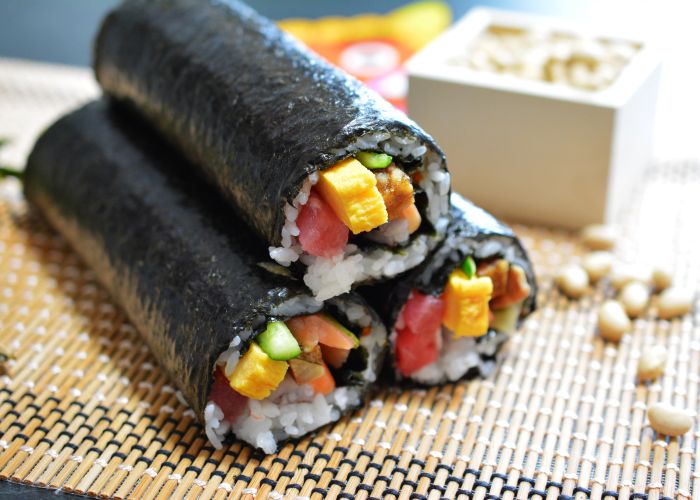 There’s so much to explore when it comes to Japanese seaweed, whether you’re tucking into it at restaurants or having a go at using it to create authentic dishes at home. It’s super healthy and adds a fantastic depth of flavor, so work your way through the types of seaweed on this list and see which you enjoy the most!

We strive to be as accurate as possible and keep up with the changing landscape of Japan’s food and travel industries. If you spot any inaccuracies, please send a report.
6
Click clap if you like this post
Ashley Owen
Ashley is a freelance travel writer from the UK who spent the last two years living in Japan, and is about to embark on her next adventure to New Zealand. She's always on the lookout for exciting new vegan treats wherever she goes!
SEE ALL POSTS
You may also be interested in
Culture