The Cult of Ramen Jiro: Legend, Lore, and Lingo

Everything about Ramen Jiro is aggressive. Thick-as-udon, tough-as-nails noodles. Pungent mounds of raw chopped garlic. Globs of pork back fat swimming in a soy-sauce based broth. That rich unctuousness that coats your mouth and threatens to bust your gut. Scour the internet and you’ll find stories of overconfident grown men being bested by “small” bowls at Ramen Jiro. So when a friend mentioned this fast food ramen shop, you really can’t blame this Hobbit-sized writer for being intrigued. 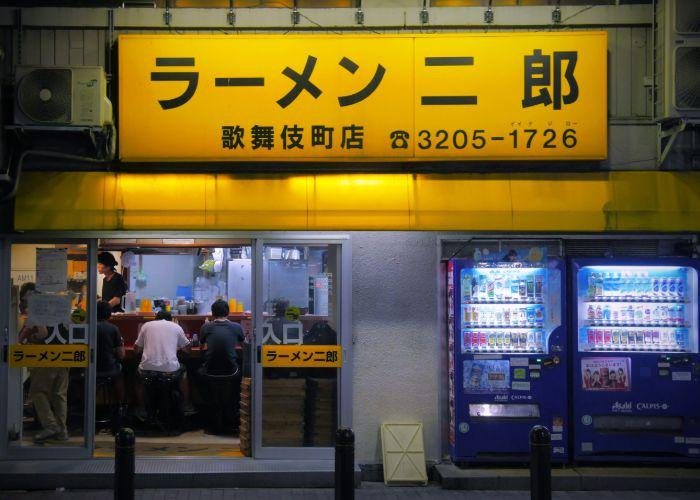 What is Ramen Jiro?

In the 1960s and early 1970s, ramen became the fuel of blue-collar workers in Japan. As its popularity grew, ramen chains sprung up en masse and new styles of ramen like Hakata ramen and Sapporo ramen were born. It was in this climate that Ramen Jiro's legacy began, a category unto itself.

Ramen Jiro is said to be so unlike other types of ramen that it doesn’t even classify as ramen. If your typical bowl of ramen is akin to a New York slice, Ramen Jiro is Chicago deep-dish pizza (or, as New Yorkers call it, lasagna).

This cult ramen shop is notorious for its three barriers to entry: (1) Ramen Jiro’s portions are big enough to give a grown man the meat sweats, (2) Ramen Jiro's staff are known for having a bit of an attitude, and (3) you have to say a magic spell to order your ramen.

Let’s break down these statements.

1. "The Portions at Ramen Jiro are Huge" 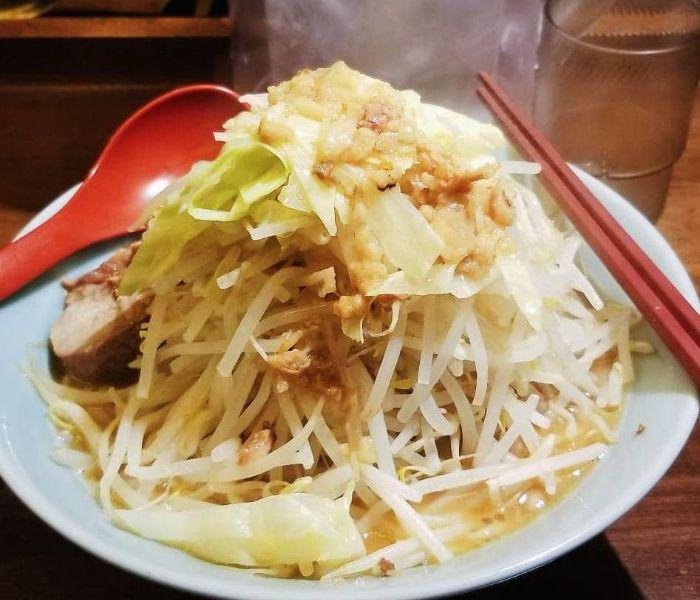 But of course, the fun part is customizing it; you'll want to top it off with some extra vegetables, fat, and meat. The concentrated broth, cloudy with pork fat, carries a fearsome amount of sodium and truly shines when watered down by an order of mashi yasai (extra veggies). Yeah, it's big. And we won’t even go into their “large” size, which many Ramen Jiro staff refuse to make for first-timers until they’ve proved their mettle.

2. "The Staff at Ramen Jiro are Rude"

Ramen Jiro staff are notoriously gruff, but feeding the masses is not an easy job (especially when the "masses" consists of rowdy teenage boys, college students, and haggard salarymen). The unwritten rules and lingo can be intimidating for newcomers, and the staff don’t hide their impatience when newbies hold up the line by stuttering out an order.

They might even pretend that they can't hear the order, inducing the stammering customer to repeat themself. And when you’re elbow-to-elbow with others at the counter, sitting in silence except for your neighbor’s ramen slurping sounds rattling in your ears, an offhand comment from the shopkeeper would be very audible by the whole room. But that’s not to say all Ramen Jiro staff are unfriendly; each Ramen Jiro shop has its own distinct personality, just don’t expect service with a smile. Ramen Jiro's not that kind of ramen joint.

The lingo of Ramen Jiro is perhaps the highest barrier to entry. The ritualized ordering process consists of a series of “calls,” and the chantlike order has a mystical, tongue twister-esque quality. The ordering system is comparable to that of a Philly cheesesteak-slinging joint, with the stubborn dedication to gruffly serving up hoagies “wiz wit,” not “with Cheez Whiz and onions.” Ramen Jiro is like that, on steroids.

Here are a few of the basic customizations you can make. For a crash course on the ordering process, customizations, and Jiro jargon, check out How to Order at Ramen Jiro. 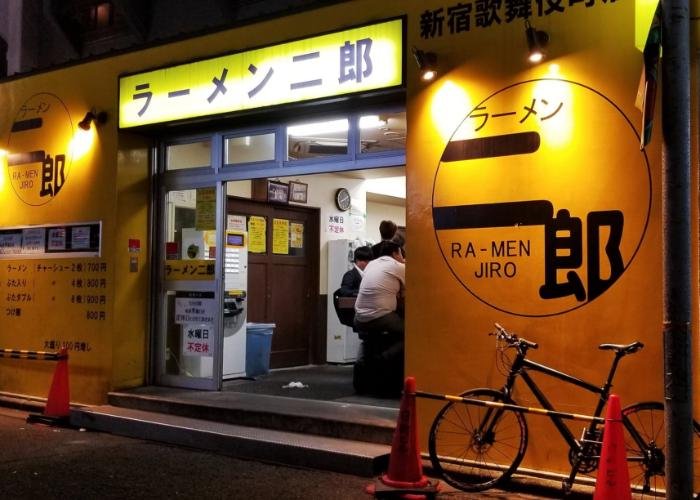 Once you’re seated at the bar and your bowl is just about ready, the shopkeeper goes one-by-one, prompting each customer with a question (the call). When he asks, “Ninniku iremasuka?” (Do you want garlic?) or "Toppingu wa?" (Toppings?), you can imagine it's easy to get tongue-tied trying to say something like: "Yasai mashi mashi, ninniku nashi."

There’s a nervous energy in the room. It feels like being in a classroom, waiting for the teacher to ask a tricky question. You might rehearse one order but a different order will find its way tumbling out of your mouth. And in that state of panic, if you utter those magic words, "zenbu mashi mashi" or "extra, extra everything," well, you’re going to be in a world of pain later because there’s no leaving your seat with your dignity intact until you’ve finished up every last straggly bean sprout and noodle in the bowl.

I first heard about Ramen Jiro on a show called Ramen Loving Girl, or Ramen Daisuki Koizumi-san, a J-drama based on a manga of the same name, which follows a ramen enthusiast high school student as she tries famous ramen shops around Tokyo. In one episode, she introduces a friend to Ramen Jiro. When the two high school girls walk in, they’re taunted by the male customers, self-declared “Jirorians,” or Jiro fanboys. They worship not ramen, but Ramen Jiro. Their jeers are quieted by shock as Koizumi-san crushes Ramen Jiro’s largest bowl, their Everest. The whole scene is dramatized but it isn’t totally off the mark.

Another testament to the Jirorian dedication is one Twitter user’s daily (sometimes twice daily) micro-reviews of Ramen Jiro from March 16, 2015 to February 7, 2016. Going by the handle habomaijiro, they amassed 35k followers with their detailed log including the photo, price, and location of each Ramen Jiro bowl. Due to a mysterious "accident" (health-related, perhaps?), habomaijiro announced an end to their Jiro reviews on February 13, 2016. Another Twitter account, toroBderoMkutaY, who some believe to be habomaijiro, has recently taken up the mantle in their absence.

Even more bizarrely, the cult following of Ramen Jiro has extended to the tech world. Using just a photo of a bowl of Ramen Jiro, machine learning software developed by Kenji Doi can pinpoint to 94.5% accuracy the exact shop where the bowl of Ramen Jiro was made. Some shops have different toppings available or dole out varying portion sizes, for example, the chashu pork at Ramen Jiro Shinjuku in Kabukicho is a much leaner cut than the one at Ogikubo, and Hachioji is one of the few Jiro locations that offer negi, or green onions, as a topping. The differences can be quite subtle, another testament to the growing power of AI. 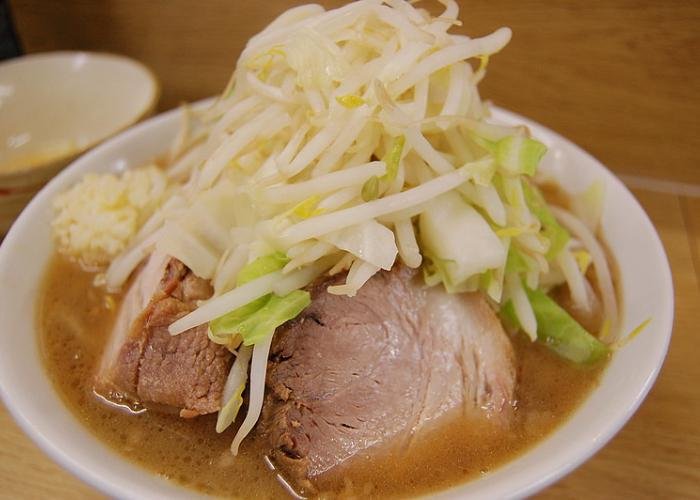 The ramen scene in Japan is rife with Ramen Jiro imitators like Ramen Dai and Tachikawa Mashi Mashi. It was at the latter ramen joint where I had my first encounter with Jiro-style ramen, ordering ninniku, yasai mashi (garlic with extra vegetables, 0.8kg of veggies to be exact). The noodles were thick, tough, and dry, rendering them virtually unslurpable.

Now, having eaten the real thing, I’m still impressed by Tachikawa Mashi Mashi’s portion size. It seemed, dare I say it, larger than Ramen Jiro’s. Their noodles were tough and barely-cooked, bean sprouts were piled high, and the chashu was ringed with tender fat. But it had that distinct Ramen Jiro taste and texture: globs of pork backfat swimming in soy-sauce based soup, leaving an oily film over your tongue and gums, with an aftertaste of mouthwatering umami. 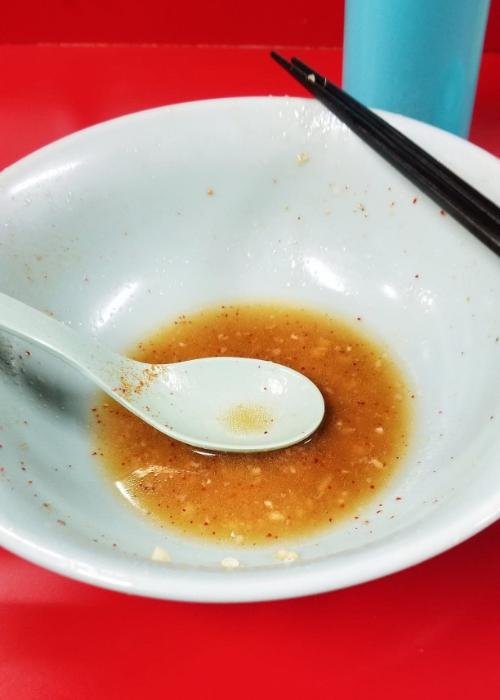 One bowl of Ramen Jiro Ogikubo, another from Ramen Jiro Shinjuku (Kabukicho), and a Tachikawa Mashi Mashi copycat ramen later, and I still feel like this is just the tip of the Ramen Jiro iceberg. Like I’ve just stuffed myself with yasai mashi mashi and there are still depths of meat and noodles and broth to explore yet.

It's the universal Ramen Jiro experience... Leaving the shop, your belly aches and the taste of fat and salt still hangs in your mouth. You think you won’t go back for a while; maybe a big salad would be nice for a change. A couple of weeks later you’ll find yourself sitting at that infamous red counter being barked at by the sweatband-wearing owner, “Toppingu wa?” Maybe, in your astonishment, you’ll stutter out a "mashi" or two.

Learn the lingo in How to Order at Ramen Jiro or find another food adventure in Japan!

We strive to be as accurate as possible and keep up with the changing landscape of Japan’s food and travel industries. If you spot any inaccuracies, please send a report.
59
Click clap if you like this post
Rika Hoffman
Rika is a sourdough enthusiast, amateur film photographer, and pun-lover, born and raised in the suburbs of Philadelphia. A carb-based lifeform, she is always on the lookout for tasty bakeries in Tokyo.
SEE ALL POSTS
You may also be interested in
Tokyo