9 Best Food Tours in Osaka: The City of "Eat 'Til You Drop"

Osaka is home to a vast range of Japan’s favorite dishes, from okonomiyaki to takoyaki to yakiniku... the list is endless! Kyoto may have a monopoly on historic Japanese dining culture, but it’s Osaka that’s the real culinary playground for the 21st century. After touching down in this neon-bathed metropolis, you might be wondering just where to start.

Japan’s third most populous city is at times an extravaganza of organized chaos, with an endless number of restaurants, food stalls, bars, clubs, and blaring pachinko parlors all clamoring for attention. To cut through the noise and tap into the beating pulse of Osaka’s thriving entertainment scene, you need to get yourself on an Osaka food tour.

Here’s our pick of the very best tours to help you maximize your experience of the best food in Osaka, while making a few new friends along the way.

Kicking things off with a bang, The Ultimate Osaka Night Tour is your window into the ultra-cool, ultra-varied drinking culture of Osaka. You’ll start by preparing yourself for the night ahead with a visit to a local izakaya (Japanese gastropub), where you’ll get a showcase of casual Osaka dining with a drink included.

This will be followed by a bar-hop around Namba, the city center area packed with loads of small bars of all styles and specialities. The tour ends with a trip to the city’s nightclub district, via the famous Dotonbori Canal. An added benefit of this three-hour tour is that you’ll get a ticket which gives you discounted entry into some of the bars and clubs around the area, so if you want, you can keep the party going until the morning!

You’ll know you’re near Osaka’s Shinsekai district when you see Tsutenkaku Tower stretching up above. On the Nostalgic Shinsekai Osaka Street Food Tour, you’ll meet up with an expert guide who’ll show you around the retro-feeling area at the base of the tower, a major entertainment center in Osaka for over a century.

This cluster of streets, packed with restaurants and bars, is a Japanese street food haven. Across 5 food stops, you’ll get the chance to sample some kushikatsu (breaded and deep-friend skewers), along with the takoyaki (octopus batter balls) no Osaka trip is complete without!

You can choose to visit in either the daytime (great for avoiding crowds) or after dark (best for soaking up the full atmosphere of the area). Either way, you’ll spend a memorable three hours exploring the very best that Shinsekai has to offer. 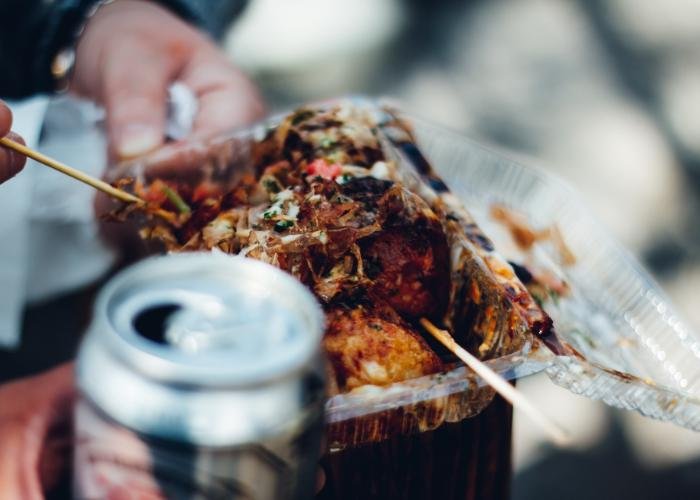 For a panoramic insight into the ins and outs of Japan’s most celebrated foodie city, the Osaka Namba and Dotonbori Food Tour is the tour to go for. You’ll start at the city’s pantry, Kuromon Market — filled to the brim with fresh fish, meat, and farm produce — before heading up the street where the best chefs of the city source their artisan gear.

Moving into the downtown, you’ll visit Dotonbori and see why the city was part of the inspiration for Blade Runner; all neon signs and captivating chaos. Across each of these three areas, you can enjoy seven different local foods, including takoyaki, yakitori, sushi, and okonomiyaki!

Perfect for those who only have a limited time to unlock the secrets of Osaka’s food culture, this is probably the most jam-packed three-hour crash course there is. 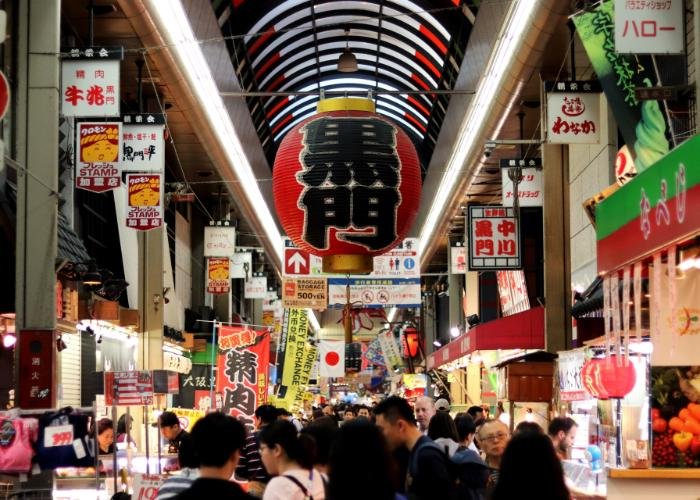 Kuromon Ichiba Market is the beating heart of Osaka’s restaurant culture. Every day, hundreds of restaurateurs descend upon it to snatch the best seafood, produce, and meat. There is a vast range of greengrocers, fishmongers, and butchers, alongside around two dozen restaurants where you can enjoy some of the freshest food in the city — straight from market to plate!

On the Osaka Kuromon Market and Kitchen Town Tour, you’ll be led around this bustling foodie playground by an expert guide who will give you insights into the various regions and foods represented here. You’ll have a chance to try some for yourself, of course! With five food stops across the three hour timespan, you’ll sample some of the goods from the various food stalls, including Osaka’s famous takoyaki.

Continuing on, you’ll also take a look at the Sennichimae Doguyasuji Shopping Street which keeps the city’s top kitchens running, with a vast number of artisan dishware and cooking utensil stores. 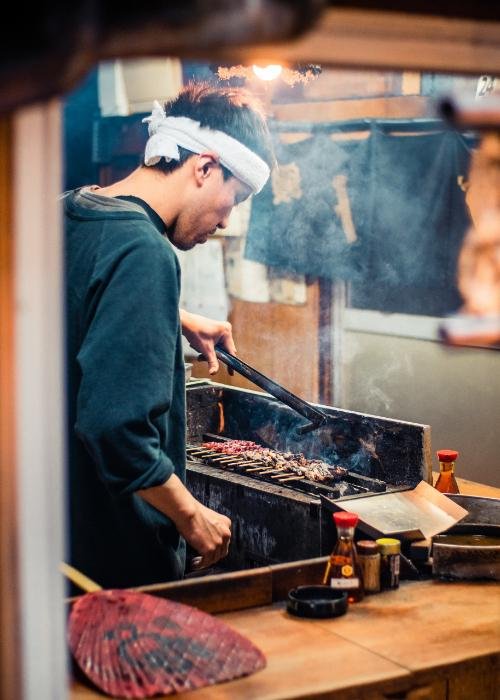 Although the popular downtown areas are great for soaking in the chaotic atmosphere, some locals tend to avoid them for that very same reason. On the three-hour Evening in Osaka Food Tour, you’ll get a chance to discover some of the lesser-known local spots where Osakans hide out instead.

The first is Tenma: home to great shopping and the famous Tenmangu Shrine. Here you can enjoy street food stalls and drinking alleys where couples and youths spend their evenings. The second stop is Kyobashi — a nostalgic area near Osaka Castle, filled with rosy-cheeked salarymen belting out karaoke tunes.

This tour reveals the other (more authentic) side of local life. You’ll dine like a native Osakan at standing bars and restaurants, trying dishes like local-style sashimi and kushikatsu fried skewers. With three drinks included, and a hearty heap of delicious foods to try, this is one of the best access points to the true Osaka experience. 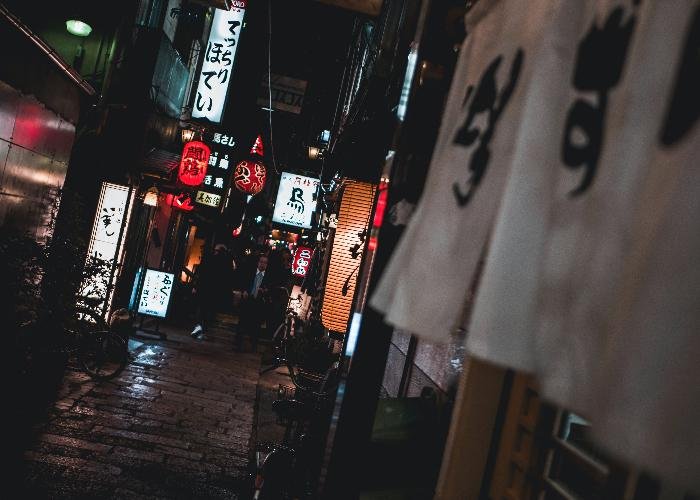 Warning: Japan is crowded. So crowded that sometimes you’ll even have to squeeze onto trains, nose-to-nose with a mass of weary commuters. Osaka’s Dotonbori area can get like that during the busy night hours. Instead of getting swept away by the masses into some subpar tourist trap, jump on the Backstreets of Osaka Food Tour at Night to beat the crowds and discover the real hidden gems this area has to offer.

Ducking and diving through the alleys and side streets of Dotonbori, your local guide will introduce you to some of the best small standing bars and izakaya gastropubs, with an Osaka food showcase along the way. This includes grilled skewers, tempura, sukiyaki hotpot, kushikatsu skewers, and Michelin-starred takoyaki!

If you feel like keeping the party going after the three-hour tour finishes, your guide will give you a suggested itinerary to see you through the rest of the evening. Or you could wing it yourself — by then you’ll be a local expert yourself, after all.

Book the Backstreets of Osaka Food Tour at Night >> 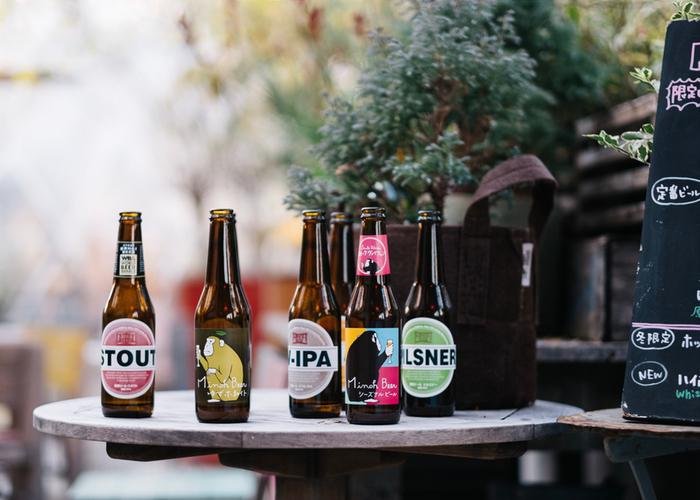 Did you think craft beer was just a Western craze? Think again! In fact, Japan has such a thriving brewing scene that it can give any of the global big guns a run for their money. Many of the big companies produce their own small-batch varieties, while hundreds of independent breweries mix up innovative creations.

One such small brewery is Minoh, named after the waterfall in a national park on the north side of Osaka. What better way to enjoy this beer than while gazing at the eponymous waterfall itself? That’s exactly what you’ll do on the Minoh Falls Japanese Craft Beer Hike. 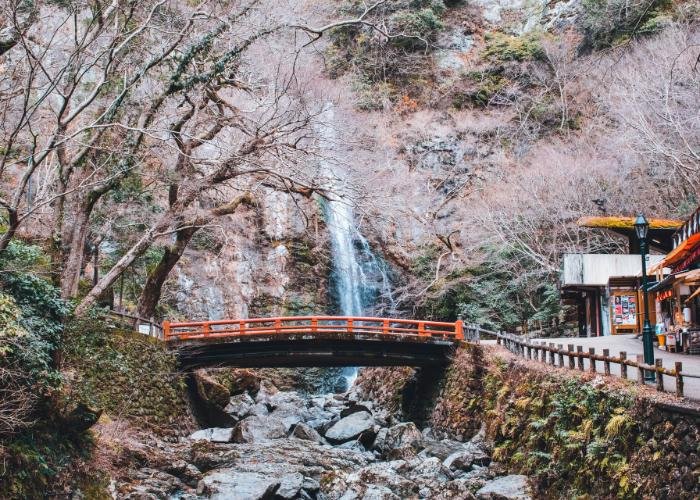 After taking a fairly leisurely hike across paved pathways through the national park, you’ll enjoy a bottle of beer while taking in the view. After that, you’ll head down to the Minoh Beer Warehouse to sample a couple more varieties, under the guidance of your beer expert and tour leader. 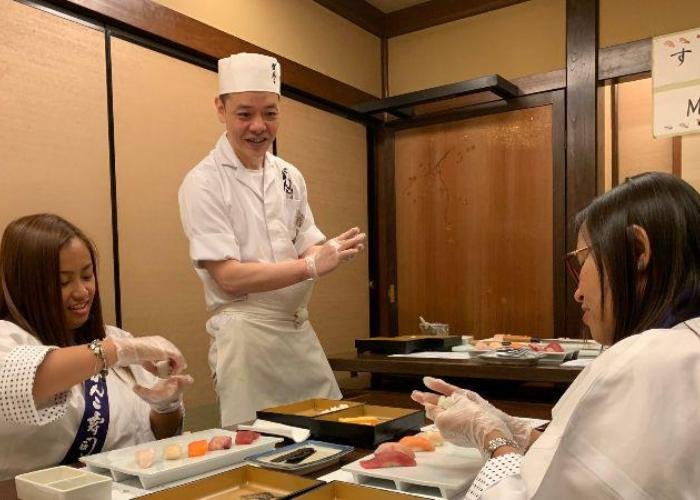 This market has been the heart of the city’s seafood industry for more than a century. On the Kuromon Market Food Tour in Osaka with Sushi Class, you’ll get the lowdown on the range of stores and products in this Osaka institution, grabbing a few samples of local favorite dishes on the way.

On top of that, you can take a walk up the nearby kitchenware shopping street to grab some souvenirs. Chopsticks? Artisan ceramics? Unique Japanese cookware? They have it all.

Okay, so now you’ve seen where it all comes from, it’s time to learn how its put into practice. The second half of the four-hour tour is comprised of a hands-on sushi workshop, led by a pro chef! You’ll be able to make you own nigiri sushi, and learn about the intricacies of this deceptively complex craft. 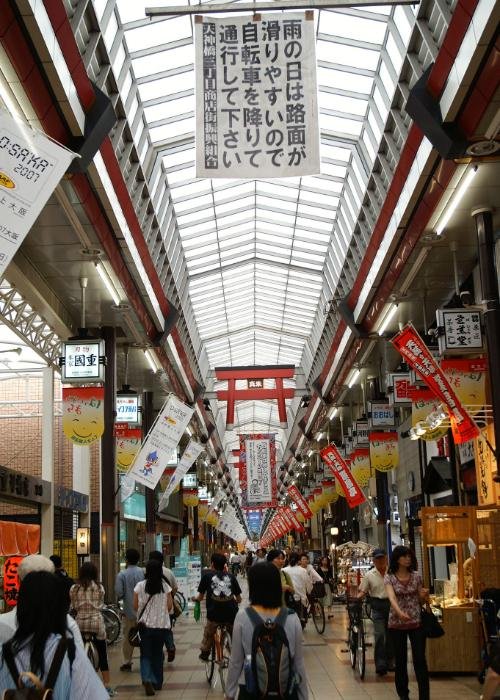 Osaka is a great place to be at any time of the day, but the city really comes alive at night. The Osaka Night Life: Eating and Drinking Tour is a perfect window into the nocturnal culture which makes Osaka Japan’s coolest (and probably rowdiest) city.

You’ll rub shoulders with the native Osakans in true local style, visiting Tenjinbashi-suji Shotengai — the longest shopping street in Japan. Here, locals gorge themselves on traditional Japanese foods and drinks, and you’ll get a chance to do so to with takoyaki, sushi, sake, wagyu yakiniku, and ramen.

The two and a half hours of this Osaka for tour really sum up the local term kuidaore, meaning “to eat yourself to ruin.” In true local style, the four jam-packed stops of this food tour will leave you ready to drop.

So there you have it — the nine best food tours in Osaka. Whether you’re a big drinker, a big eater, or just a big culture lover, you’ll love every second of your time spent in this city. Take your pick of these fabulous food tours to maximize your time and unlock the hidden secrets of Japan’s modern foodie Mecca.

For more food experiences, see our full list of food tours in Osaka!

We strive to be as accurate as possible and keep up with the changing landscape of Japan’s food and travel industries. If you spot any inaccuracies, please send a report.
27
Click clap if you like this post
Callum Howe
Originally from Fife, Scotland, Callum is a literature graduate, freelance writer, and English teacher living in Tokyo. An interest in Zen drew him to Japan, so you can often find him visiting temples around Tokyo and beyond. He loves getting involved with the local music, sports, and arts scenes.
SEE ALL POSTS
You may also be interested in
Osaka