Where to See Cherry Blossoms in Osaka

American ornamental cherry trees are strong. I had one in my yard in a home near Seattle. It held its blossoms for nearly a month—even through some heavy rains. Japanese cherry blossoms, on the other hand, gain much of their beauty from their ephemeral quality. They are a metaphor for the fleeting nature of beauty, pleasure and life itself. They are a physical reminder to live in the moment. My home is not Seattle now—I live in Osaka. Then, if I am not to miss this moment, I must decide where to see cherry blossoms in Osaka this year.

The cherry blossom festival, or sakura matsuri, in Japan has undergone some changes in the last 30 years. It was formerly common to have company cherry blossom viewing parties, complete with a BBQ and karaoke machine powered by a portable generator. Heavy drinking was de rigueur. Junior employees would stake out a large area under the most graceful branches with blue sheets and stand guard all day until the evening party. This has fallen out of favor. Young employees today prefer to have their free time to themselves and to separate work and play. Nowadays, those people staking out the best Osaka hanami spots are more likely to be families, couples and groups of friends. 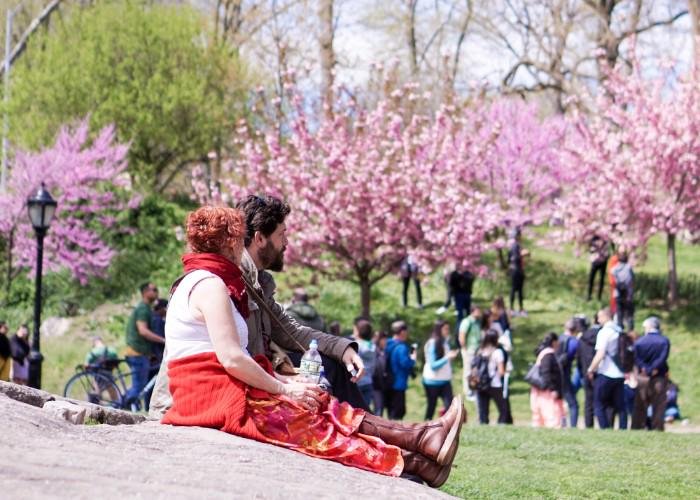 The best places to see cherry blossoms in Japan are generally castles and temples, tree-lined walkways and riversides, and parks. Of that, more in a moment. First we must talk schedules. It is odd to think that to live in the moment one must plan ahead, but so it is. I visited Mino waterfall in December this year hoping I might see a few remnant red leaves, but found a bald hillside instead. So it is with the cherry blossoms—make a plan and act on it or miss the moment.

When is Cherry Blossom Season in Osaka?

As for the best time to see cherry blossoms in Japan, the Japan Meteorological Agency issues official maps of the expected dates of the first opening and peak viewing dates on its website. In general, the season progresses from south to north and from lower to higher altitudes. The cherry blossom Japan schedule also appears on Japanese TV news as the season approaches. However, there are several private websites that are already making such predictions—for the cherry blossom Osaka forecast, the consensus is that it will begin around March 21-25 and run into mid-April depending on elevation.

These predictions are all based on the blooming of the Somei-Yoshino cherry tree, the most widespread cultivar in Japan. Somei-Yoshino cherry trees cannot be grown from seeds and are instead propagated by grafting onto Oshima cherry tree rootstock. As they are thus all genetically identical, they can be used as a common denominator for tracking the progress of the cherry blossom viewing season.

Where to See Cherry Blossoms in Osaka

Here are some of Osaka's top cherry blossom viewing spots! 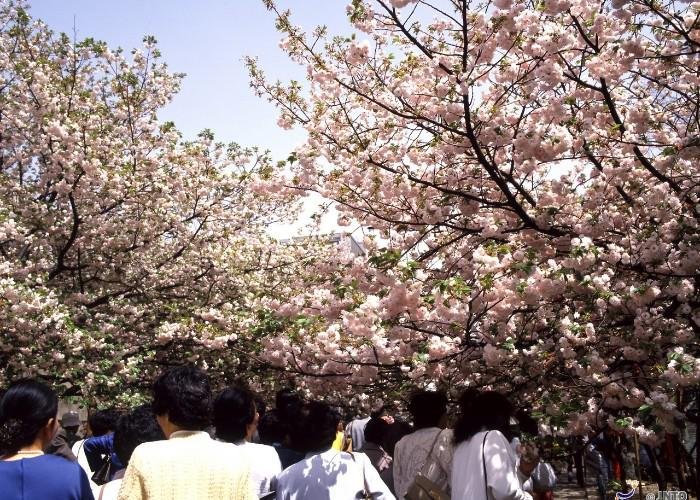 The Osaka Mint (where coins are made) has a cherry-tree lined walk running parallel to the O River for 560 meters. This is open to the public for one week during the cherry blossom season. The open dates can be found on the Mint’s website. In 2018, it was open April 11-17 ; and in 2019, it was open from April 9-15 . It is very crowded, and you will have to shuffle along to the outlet with the other lemmings. This is a one-way path (south to north), so start near Temmabashi Station (Tanimachi Line) and end near Sakuranomiya Station (JR Osaka Loop Line).

There are no hanami picnics, nor even stopping, allowed here. The special attraction is the huge diversity of cherry trees—338 trees of 134 varieties—with contrasts of form and color. The branches form a tunnel and the Osaka Mint cherry blossoms are beautifully lit at night. Admission is free. 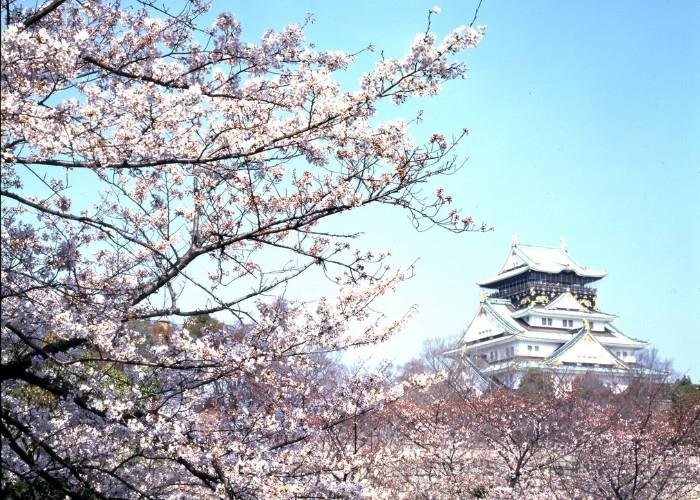 Osaka Castle Park cherry blossoms are quite numerous—there are over 4,000 trees. But that doesn’t mean you won’t have to arrive early to get a choice spot—this place gets crowded. Try a weekday for a lighter crowd. Access is from Morinomiya Station on the JR Osaka Loop Line. Nishinomaru Garden at the western part of the Osaka Castle grounds is the most suitable place for hanami picnics. The trees here are illuminated at night, so it is also a good place for an evening stroll. Access to the grounds is free. 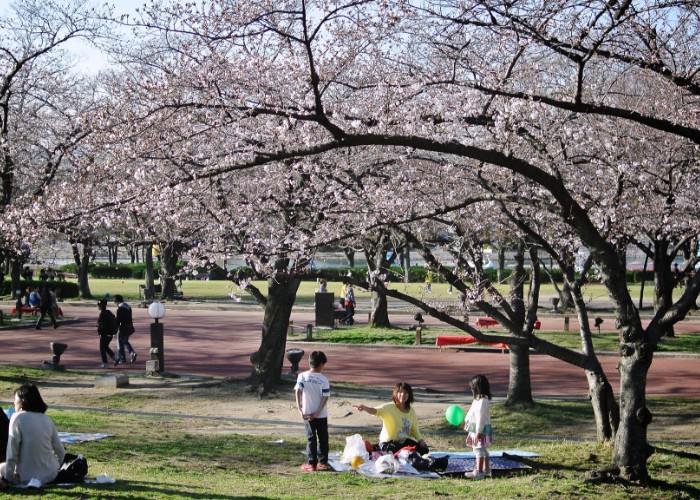 The Expo ‘70 Commemorative Park flower calendar lists a Cherry Blossom Festival as taking place from early to mid-April, but it may be earlier, depending on when trees are in bloom. You are bound to find a picnic spot here as this park is so big, and has so many trees—about 5,500 cherry trees bloom inside the park, about half of them Somei-Yoshino, while some of the others have a vermillion red color. Look along Higashioji Street in the Natural and Cultural Gardens section of the park.

The park usually closes at 5:00 and is closed on Wednesday, but hours are extended to 9:00 pm (last entry 8:30 pm) for the cherry blossom festival. Access is from Bampaku-kinen-koen Station of the Osaka Monorail. 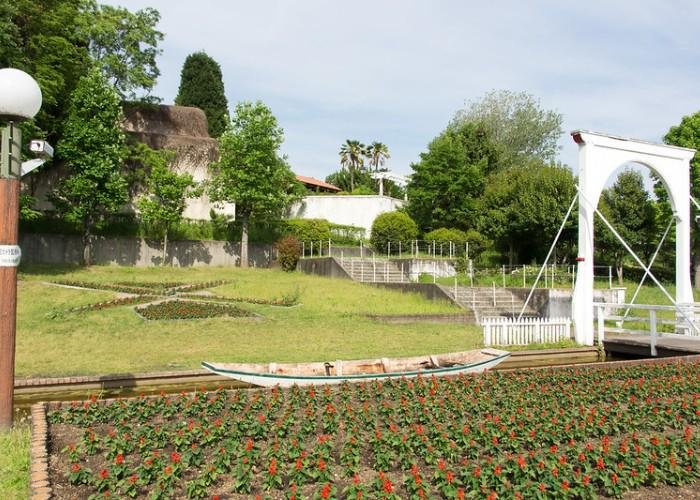 Tsurumi Ryokuchi Park is a large botanical garden of 210 hectares. Another good choice for a picnic—plenty of grass and plenty of space, though there is a fair amount of foot and bicycle traffic along the paths in the season. Try the Mountain Area or Flower Valley sections of the park to find cherry trees. Access from is Tsurumi-Ryokuchi Station of the Nagahori Tsurumi-ryokuchi Line. Admission is free. 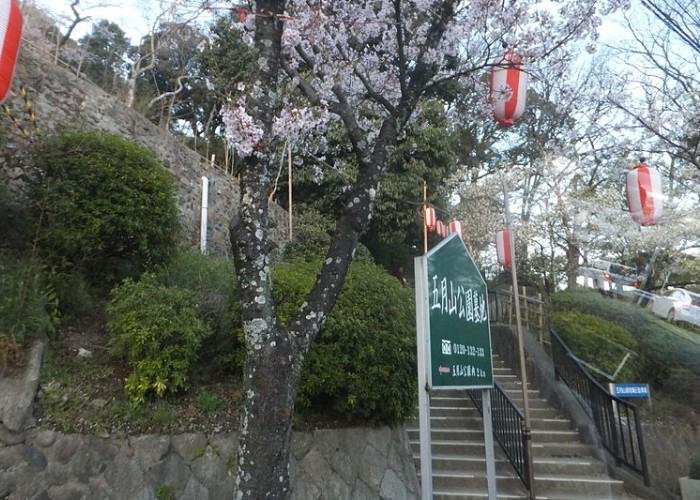 Do you like wombats? I have never seen a wombat, but if you want to see a wombat and enjoy cherry blossom viewing on the same day, this would be the place for you. Satsukiyama Park in Ikeda City has both a zoo and sakura. It’s a 10-minute walk from Ikeda Station on the Hankyu Takarazuka Line. (Ikeda is also the home of the Cup Noodle Museum, which I seriously recommend—though that is on the other side of the station.) This is also an area that can be enjoyed by car, if you have one. The Satsukiyama Driveway is lined with blossoms. Admission is free, though parking is charged. Reviewers highly praise the park’s clean bathrooms. 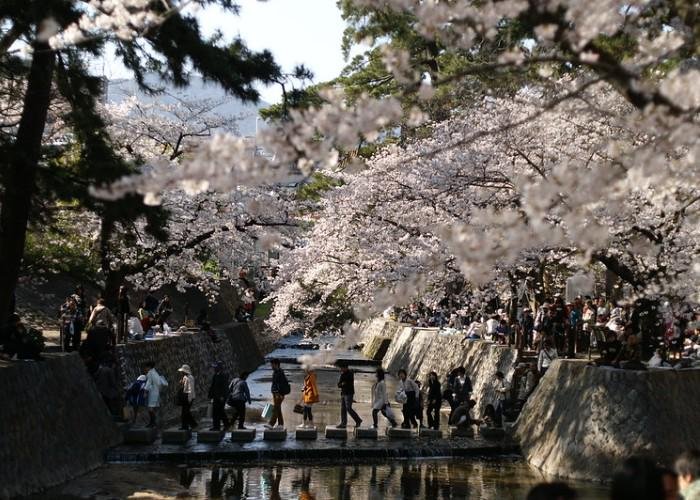 Well yes, I realize that Shukugawa Park is in Nishinomiya City, and that Nishinomiya City is in Hyogo Prefecture and not even in Osaka Prefecture. Still, it is within easy reach from Umeda or anywhere around the north-west corner of Osaka. It is a river—hemmed in with concrete like many Japanese rivers—but still a river, with picturesque cascades over small concrete retaining dams (built so the river doesn’t dry up completely in summer). And along the sides of the river are flowering cherries, and the branches of the trees extend gracefully over the water. And behind the row of cherry trees is a row of tall pines. It sounds very man-made, and it is, but the effect is not bad. There is a walkway next to the water, below the level of the trees, and you can picnic too. Really, it’s better than it sounds…

Starts from Sakura Shukugawa Station of the JR Kobe line and returns by Koroen Station of Hanshin Railway. 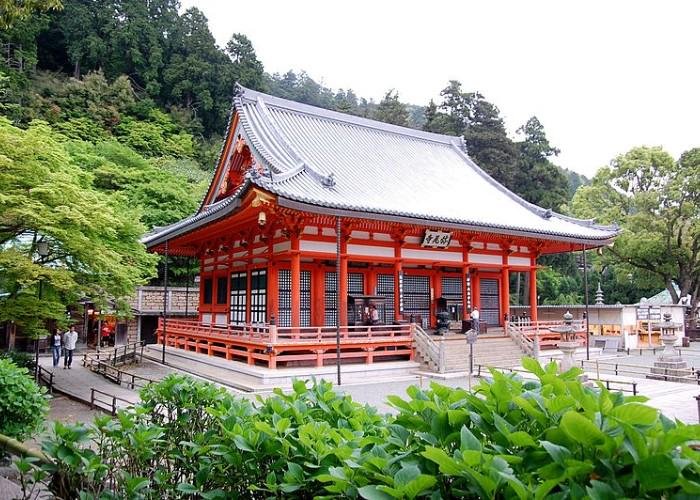 Katsuo-ji Temple is a 15 minute taxi ride from Mino Station of the Hankyu Mino Line. However, if you’re up for a hike, you can trek from Mino Station to Mino waterfall and then to Katsuo-ji (about 5.6 km in all). I would allow 40 minutes for each leg of the trip. A taxi to the top and the hike down would also be an easier option. Proper shoes are needed. A map of the route is available here on Wikiloc. There are many daruma dolls decorating the shrine, and the garden area around the shrine has interesting Higan-zakura, Shidare-zakura, Yae-zakura, and Yama-zakura varieties of trees. Due to higher elevation, these may bloom a bit later (mid-April to the beginning of May) than the lowlands. Admission is 400 yen. 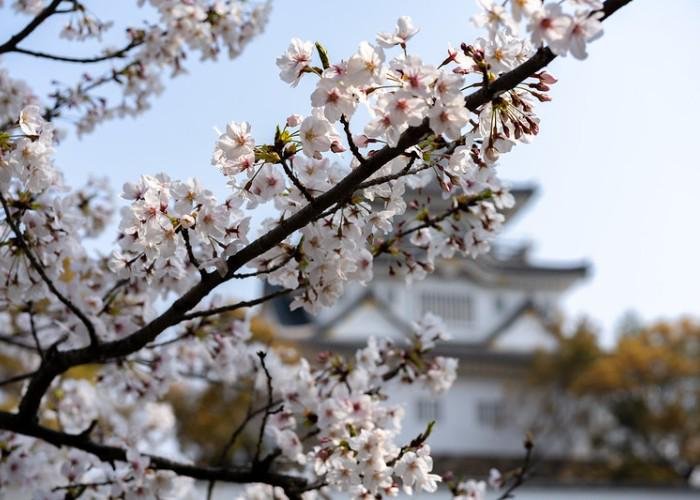 Kishiwada Castle was built—in its current incarnation—during Japan’s great castle-building era of the late 1950s. The building is near Kansai International Airport. Access is from Kishiwada Station of the Nankai Line. The charm of the spot is to see the castle with its moat as a background while picnicking under spreading boughs. Less crowded than Osaka Castle, and cherry blossom viewing is free of charge. The entrance fee for the castle tower is 300 yen for adults, free for middle school students and below. 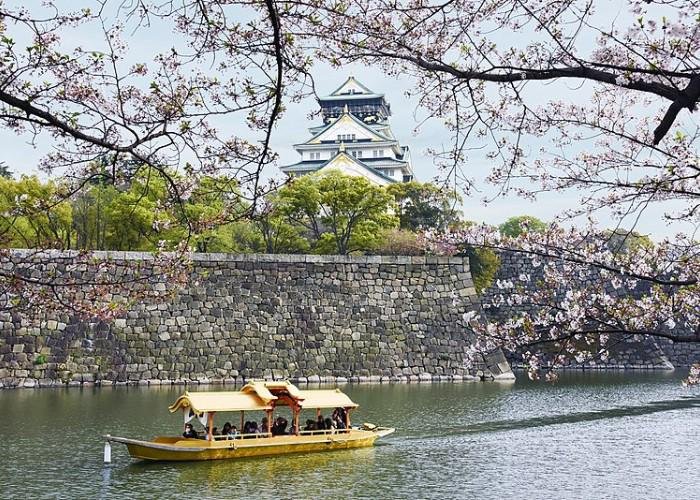 Osaka Water Taxi offers an easy way to see the trees lining the O River from the comfort of a glass-roofed boat. The previously mentioned Osaka Mint and Osaka Castle are visible, and can also be combined with a cruise. Osakajo Pier is near the castle. Between March 28th and April 15th the fare is 2,000 yen for adults and 1,000 yen for children, but you can also take only segments of the full cruise at lower prices. Check out the Osaka Station Guide site for boarding locations and schedules. 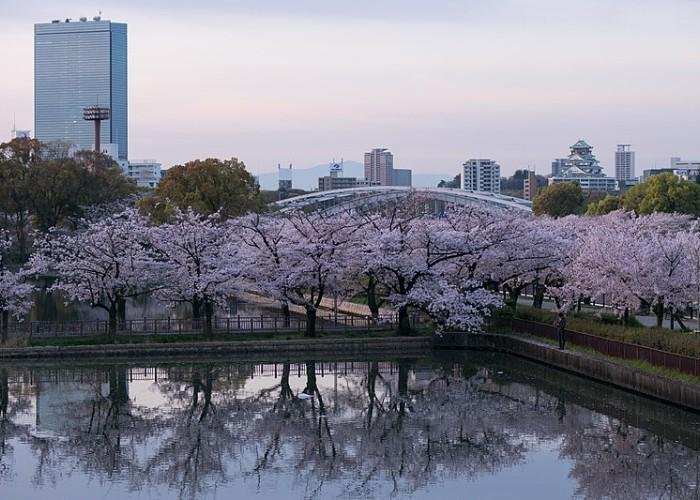 Kema Sakuranomiya Park runs along the O River, and contains 4,500 cherry trees. You can access it easily from Umeda—just two stops on the JR loop line to Sakuranomiya Station, making it easy to propose on a whim. You can walk along this river, as I once did, hand in hand with a beautiful young woman…eat the bento she prepared with love…rest your head in her lap and close your eyes, occasionally opening them to glimpse her sweet face framed in swirl of pink blossoms…

There is melancholy in things that do not last, but this makes them somehow more beautiful.

To experience the magic of hanami season in Osaka, book the Osaka Cherry Blossom Food Tour.

We strive to be as accurate as possible and keep up with the changing landscape of Japan’s food and travel industries. If you spot any inaccuracies, please send a report.
0
Click clap if you like this post
Chris Loew
Chris Loew reports from Osaka, where he has lived for 20 years. He writes about food, Japanese companies, and marine policy issues. He previously worked for two years in the purchasing department of a Japanese meat importer, and for five years as export director for two Seattle food companies, selling to customers in the Far East. He has co-authored two college-level language texts. When not writing, he proofreads Japanese-to-English translations.
SEE ALL POSTS
You may also be interested in
Osaka