Festivals in Tokyo: Matsuri for Every Season

When people think of Tokyo, their first impression might be of a modern metropolis bustling with people and lit with neon lights. But, in fact, Tokyo has a long history as Japan’s capital, dating back to 400 years ago when the city was known as Edo. It is one of the best places for you to spend holidays in Japan, as you can explore all facets of this wonderful country, from its history to contemporary culture, traditional festivals to the latest trends, with plenty of festivals for you to experience the local vibes! Here, we have listed some of the major festivals in each season, so you will never run out of things to do in Tokyo!

The day of the winter solstice is deemed as the darkest day of the year, alongside the arrival of icy winter, therefore the celebration of this traditional festival is aimed to bring light and courage to the people, so the next day will be brighter and merrier. Join the festival in two neighboring locations in the Waseda area, the Anahachimangu Shrine and the Hojoji Temple, where you can buy a charm called Ichiyo Raifuku to guard yourself against the chilly winter and wander around the winter market for winter-related goods and hot food. 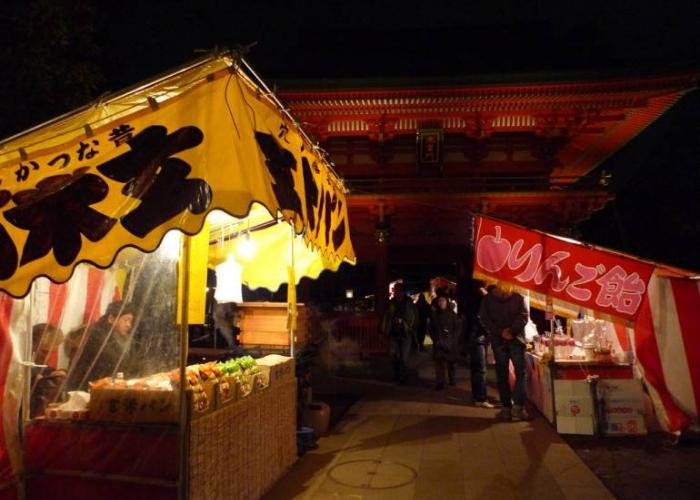 A satisfying way to celebrate the Japanese New Year would be filling your belly with Japanese food! With the motto of “Foods from all over Japan,” you can save the money you might have used for flight tickets and enjoy a wide variety of Japanese delicacies from different cities in this festival. For those who’d like to wash the food down with booze, there are plenty of choices from sake the rice wine to local craft beer. While enjoying the good food, you will also be entertained by traditional performances that bring a lively and festive ambiance. 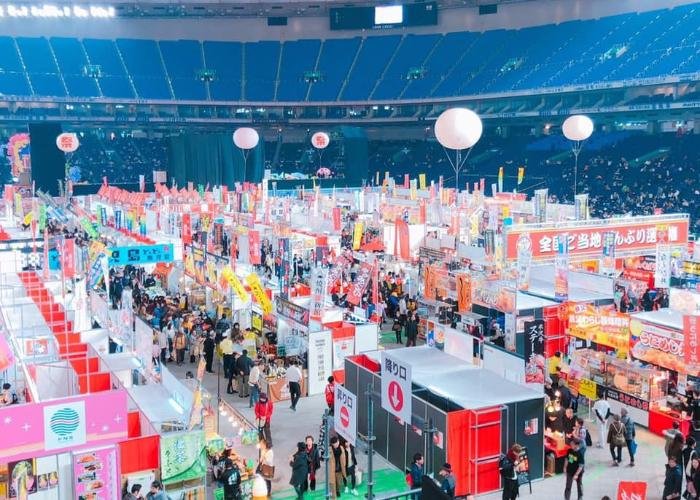 One of the Japanese traditions to celebrate Oshogatsu (Japanese New Year) is literally full of beans! Setsubun is the day of chasing away the devils to welcome good fortune for the new year. The bean is a symbolic token, as mametsu, meaning “bean-throwing,” also has a second meaning related to expelling demons (“mame” sounds like the word for “demon eyes”). In the festival, you will see people merrily throwing out soybeans from the stage, while there is also someone dressed as a demon and doing some “exorcism” practice. There is also a food tradition - eating the sushi roll called eho-maki. Eat the whole sushi roll quietly while facing the lucky direction of the year, and make a wish! It is believed to be bring you blessings in the new year! 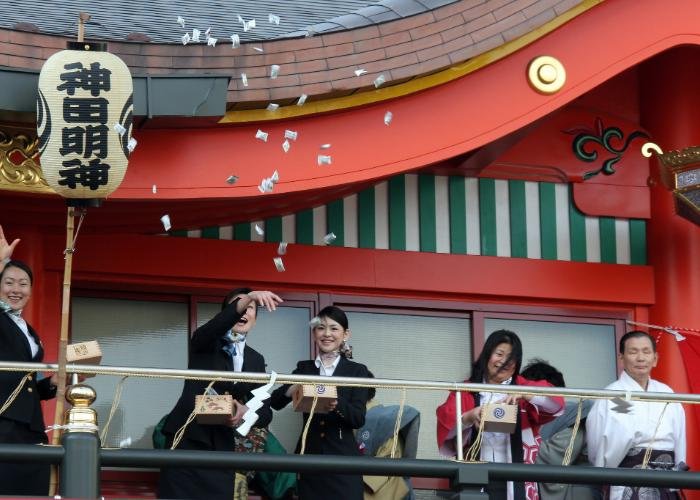 The cherry blossom festival is predicted to be held around March to April. Popular hanami spots include Sumida Park with over 600 cherry trees that explode in pink, Ueno Park with 800 cherry trees and a beautiful lake where you can even enjoy the gorgeous view on a boat, Nakameguro the canal-side promenade surrounded by pink sakura (perfect for a romantic stroll); and lastly, Kitanomaru Park where you can see flowers in full bloom along the moat of the ancient Edo Castle. There will also be food stalls at the festivals so you can have a feast for both your eyes and appetite. Cherry blossom is not only a daytime activity - Yozakura is also available in most parks where the cherry trees will be illuminated after sunset. The sakura glimmer in the lights, creates a more mystical and wondrous atmosphere. 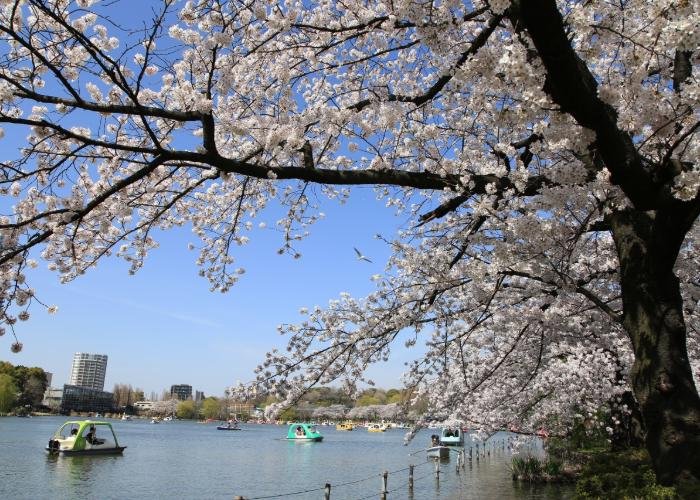 If you are a fan of Japanese culture and art, remember to include this spring event on your trip to Tokyo! To celebrate the arrival of spring and also Golden Week, Tokyo’s most notable and biggest shrine Meiji Jingu will be holding a grand festival over a week. There will be a wide variety of impressive traditional performances performed by the extraordinary experts in the fields, including Bugaku (court dance and music), Yabusame (mounted archery), Budo (martial art), Kyudo (Japanese archery), Sankyoku (chamber music) and many more. 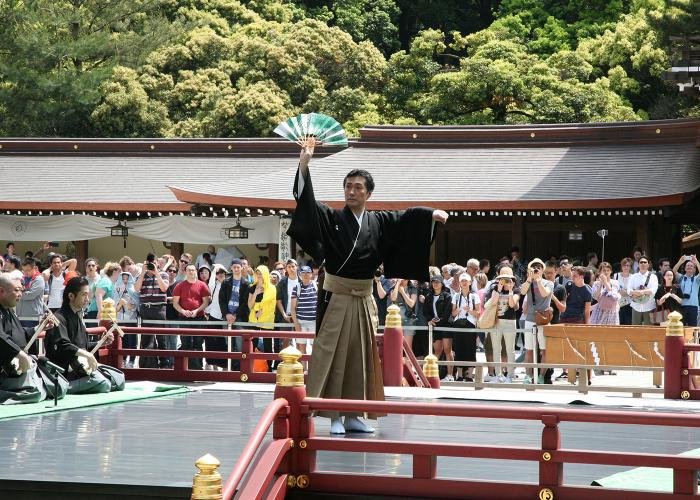 Want to experience the hype of a traditional festival in Tokyo? Do not miss the Sanja Matsuri in May, the festival that has been considered as one of the largest and liveliest traditional festivals in Japan. Join the crowd to watch how hundreds of mikoshi (portable mini shrine) that carry kami (gods) parade along the street in Asakusa with the aim of bringing blessings to the local businesses and residents. The festive vibes will continue throughout the full weekend, with various food and game stalls and shops in the shrine area. 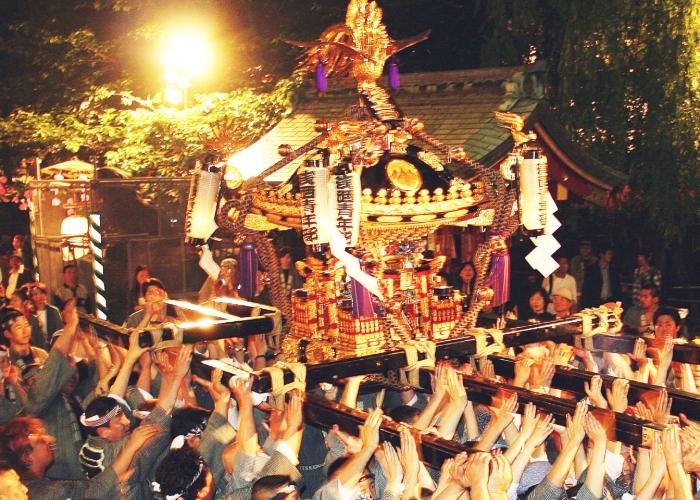 If you are in Japan during late spring, don’t worry about missing the cherry blossom or arriving too early for the summer events, the rescheduled firework festival is here for you! Due to the 2020 Olympics, this July event has moved forward to May this year. For Japanese, hanabi is the symbol of the summer season. The faint smell of fire powder in the air and the colorful fireworks lighting up the night sky are summertime memories that will last a lifetime. Fireworks festivals are also considered to be one of the most romantic festivals in Japan, therefore it is a popular date spot for loving couples, with some Japanese choosing to confess love to their crush under the blooming fireworks. 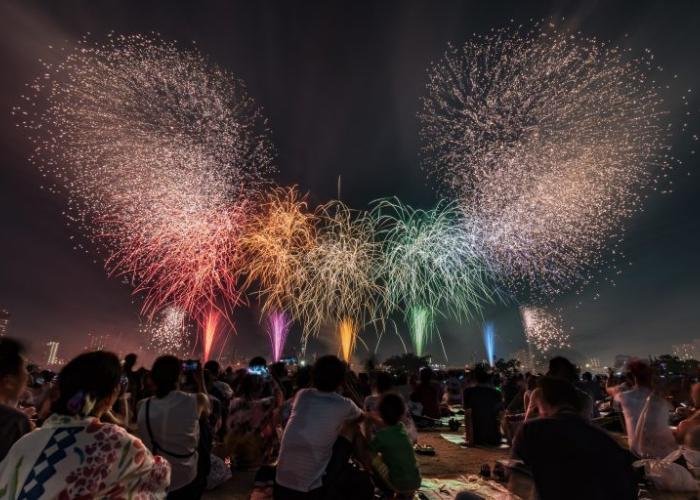 As one of the three grand historic festivals of Edo, Sanno Matsuri lasts for 10 days and includes a grand parade and a series of events such as traditional music and dance performances. The most important part of the festival is the main procession which consists of kami carried in mikoshi , which will pass by several sacred places including the starting point Hie Shrine (where the visitors may also cross through the large straw ring as an act of purification), Yasukuni Shrine, and Tokyo Imperial Palace. If you want to witness this impressive 9-hour parade, join the festival on June 8th (Friday) from 7:30 am until 4:45 pm. 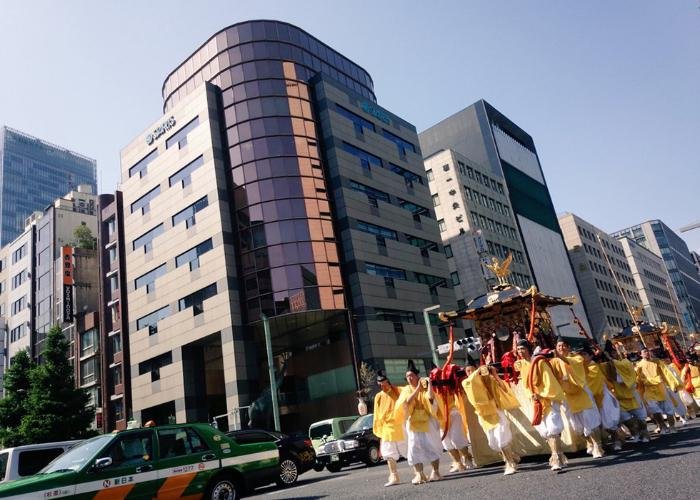 Obon is a Japanese Buddhist ritual that the locals celebrate during the summer, while Mitama Matsuri is one of the biggest Obon festivals in Tokyo. During the daytime, there will be various performances including mikoshi parade, gagaku classical music, and kappore dance. After sunset, the shrine’s entrance will be lit up with countless golden lanterns to welcome the visitors who stay up late, while the nighttime highlights are the Awa-odori dance and the colorful Nebuta float. 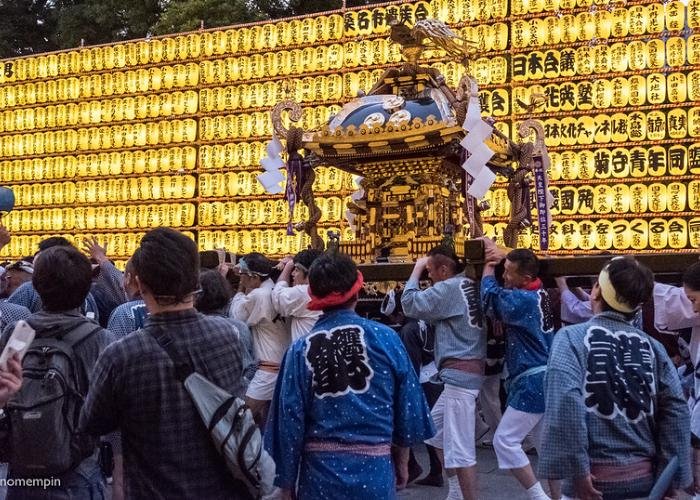 Here’s another summer bon festival in August, the largest Bon Odori in Tokyo. A tip for those who wish to blend in with the locals: wear a summer yukata and join the bon odori dance! You will see men and women, old and young, all waving their uchiwa (paddle-shaped hand fans) and dancing merrily around a fountain centered in Hibiya Park. The dance is accompanied by the catchy song Marunouchi Ondo, which you might find familiar as it forms the basis for the most well-known bon odori song, Tokyo Ondo. 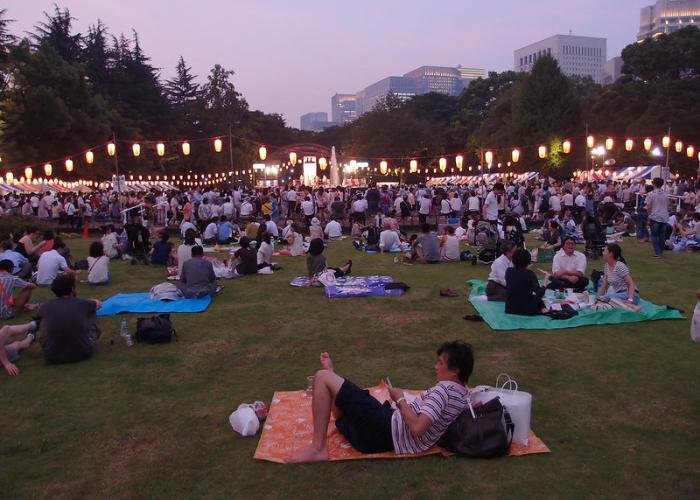 Daradara means “endless” which hints at the extraordinarily long duration of this festival. It also has an amusing nickname of Shoga Matsuri as there will be fresh ginger sold on-site, which is a tradition that has continued ever since the naturally antibiotic plant reportedly saved the lives of the people of Edo when their water was poisoned. Just like any other classic Japanese matsuri, there will be bustling food stalls leading up to the shrine, while the main parade of mikoshi with kami will fall on the main festival day (to be announced). One of the festival highlights will be the sale of an exquisite charm for good marriage - Chigibako, which is popular among Japanese women but extremely rare to find elsewhere. 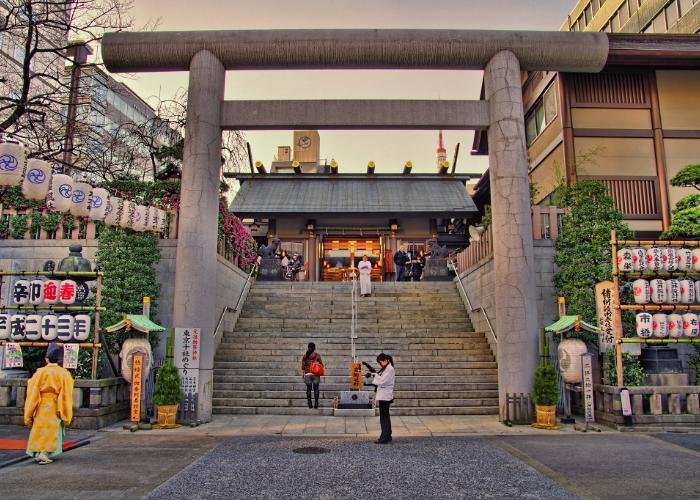 Oeshiki is a Japanese tradition to commemorate the death of the notable Buddhist saint Nichiren. As the exact place where Nichiren passed away, Ikegami Honmon-ji temple has become the most famous place for the festival. The festival highlight will be the mando parade with around 3,000 people carrying sacred flower lanterns from Ikegami Station to the temple. Kindly note that the main lantern parade will be starting from 6pm on October 12th. The summer matsuri will be held over 3 days. Wear a yukata and enjoy the lively festival by getting Japanese street food like candy apples and takoyaki, playing games such as scooping goldfish, and getting your fortune told. 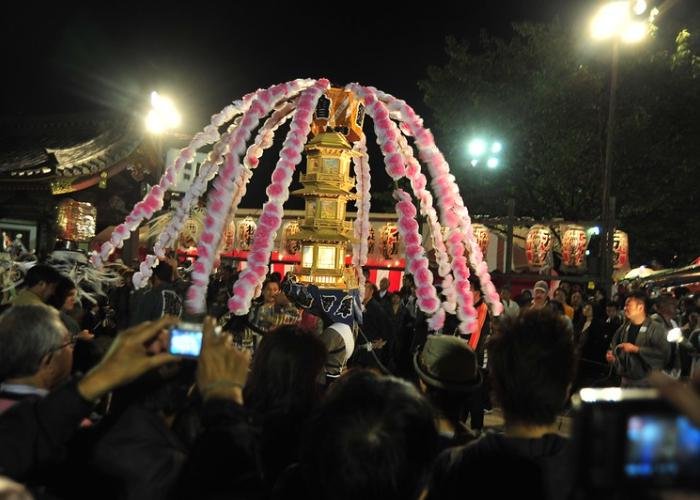 Aoyama Festival is held annually during the first weekend of November, organized by the local merchants association and students of Aoyama Gakuin University. Not far from the famous Shibuya crossing, this festival has welcomed a huge crowd every year. There will be food stalls, talk shows, concerts, and there was even a fashion show in the previous year’s festival. As many students help run the festival, it carries a more stylish and youthful vibe that is different from a typical traditional matsuri.

Time: (to be announced) 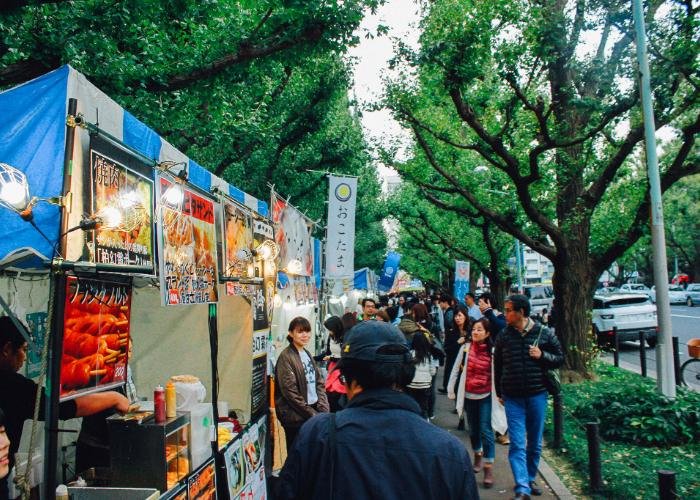 Hagoita, the rectangular bats, are used for the traditional game Hanetsuki, but now Japanese artisans have turned them into eye-catching ornamental pieces which are popular to use as decoration, gifts, and good luck charms. Enjoy browsing the colorful hagoita while you can observe Japanese cultural elements from the designs, such as beauties in gorgeous kimono, imposing kabuki actors, and even the famous celebrities and cartoon characters. A fun tradition of the festival, after you buy a Hagoita, the seller may applaud you for the purchase! 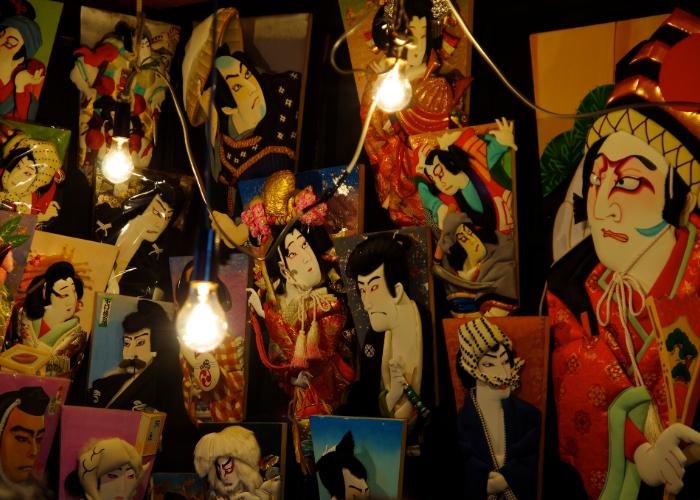 These are all the fun festivals in Tokyo that you should not miss. Enjoy the jolly vibes and experience the authentic Japan, the traditional way!

For more things to do in Tokyo and beyond, from cooking classes to food tours to tastings, explore food experiences in Japan!

We strive to be as accurate as possible and keep up with the changing landscape of Japan’s food and travel industries. If you spot any inaccuracies, please send a report.
0
Click clap if you like this post
Tan Cai Ee
Echo is a forever-18-year old travel and food addict from Malaysia, currently studying in Hong Kong and now taking an internship in Tokyo. She genuinely believes that trying out local food is one of the most essential things for every satisfying trip. Here’s a comment from an anonymous travel buddy – “We could never save budget on food as she always pulls a long face whenever she’s hungry.”
SEE ALL POSTS
You may also be interested in
Tokyo