Kōyō: 17 of the Best Places to See Autumn Leaves in Japan

Autumn is one of the most beautiful seasons in Japan, thanks to the stunning fall foliage known as kōyō that transforms the country into a breathtaking landscape of vibrant red, orange, and gold leaves. Viewing autumn leaves in Japan is an absolute must if you visit at this time of year. There are a wealth of amazing places to do so, from epic national parks with picturesque hiking trails to serene temples and shrines surrounded by Japanese maple trees in gorgeous hues of crimson. Read on for our recommendations of the best times to see autumn leaves in Japan, and the top spots where you can admire them in nature.

When to See Autumn Leaves in Japan

﻿With the weather conditions varying every year, the forecast for peak fall foliage season changes annually too. Generally speaking, the leaves begin to turn in the northern areas of Japan first – as well as those at higher altitudes – and then sweep south and to lower altitudes in a wave of red and gold. Here’s a quick overview of when to see autumn leaves in Japan by region:

The mountains of Hokkaido, Japan’s northernmost prefecture, are the first places you can enjoy Japan’s fall foliage. Here the colors start to change in mid-September, and gradually spread to lower altitudes where you can view them until around the end of October.

The Tohoku region tends to see the kōyō season begin in early October and last until the middle of November. The more southern parts of the area, such as Sendai, often enjoy the autumn leaves until the end of November.

Kanto, in the center of the country, tends to benefit from a longer season for viewing autumn foliage in Japan. The leaves can begin changing color as early as late September and last till early December in Tokyo.

Kansai is among the later regions for seeing Japan’s fall foliage, with the leaves usually starting to change color in late October and lasting all the way to December in Kyoto and Osaka. 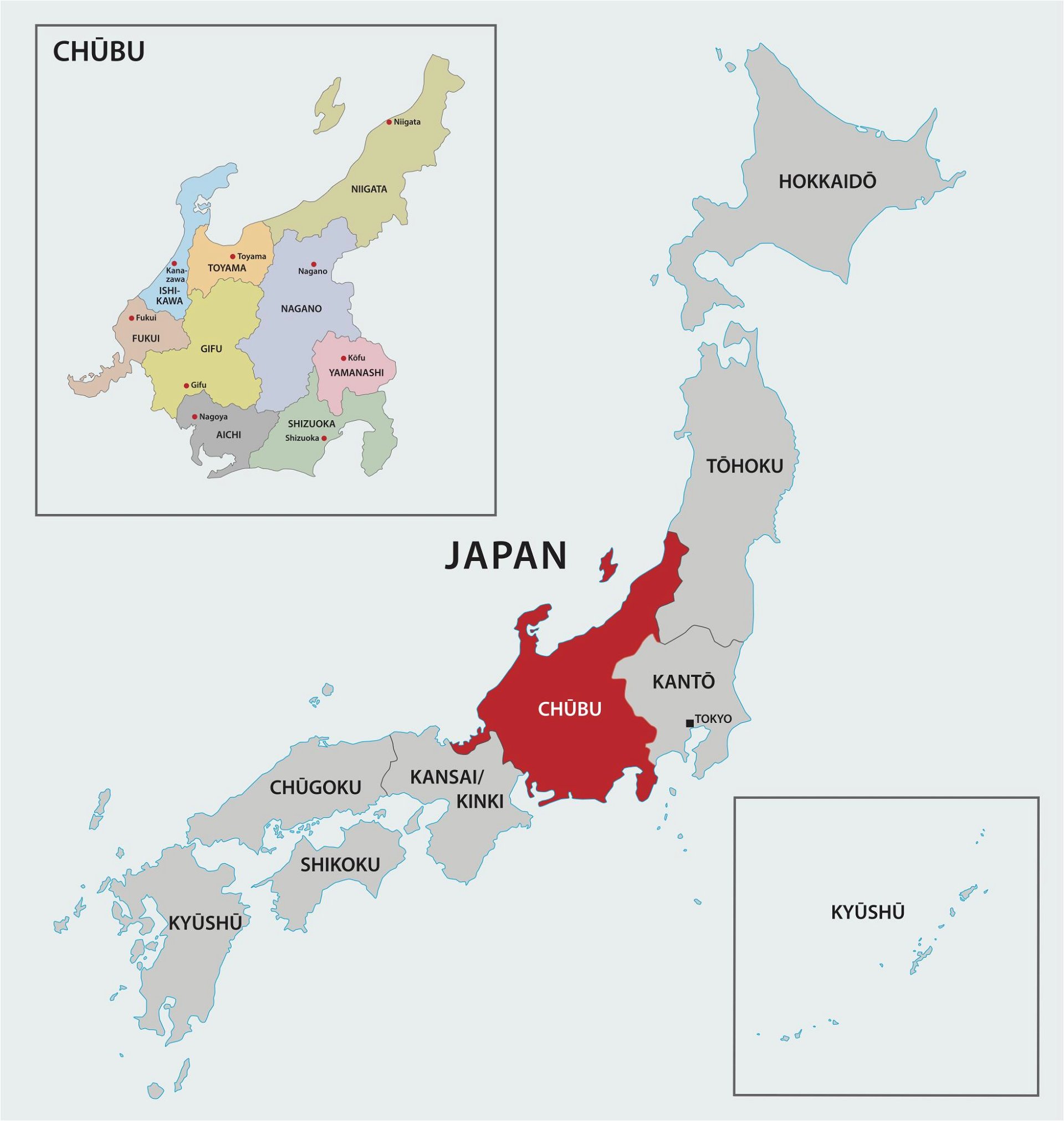 Chubu is another region with a long kōyō season. In high-altitude locations, the leaves can turn as early as late September, spreading to lower and more southerly areas until early December.

The Chugoku and Shikoku regions are among the last to experience Japan’s fall foliage, with the colors usually appearing around late October and lasting until late November in places like Miyajima.

Down south on the island of Kyushu, autumn leaves can be seen as early as mid-October and last until the end of November.

Due to its sub-tropical climate, Okinawa doesn’t tend to experience much in the way of fall foliage.

Kōyō: 17 of the Best Places to See Autumn Leaves in Japan

Here are some of our top recommendations for where to see autumn leaves in Japan: 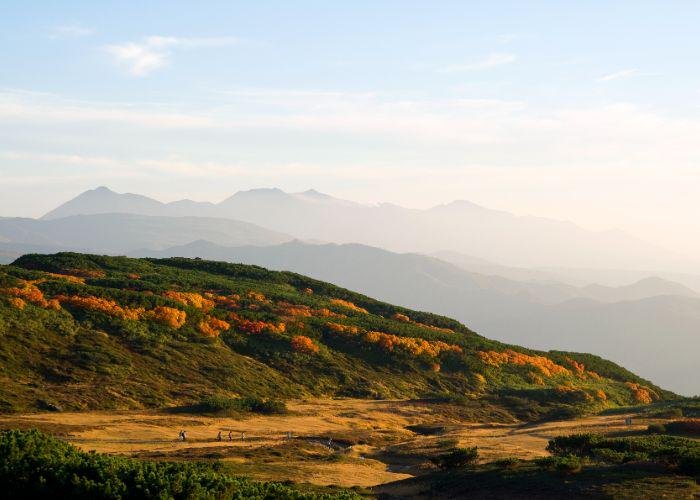 Rugged Daisetsuzan is the largest national park in Hokkaido, and usually boasts the first autumn foliage Japan sees. The hike from the Ginsendai trailhead to the peak of Mount Akadake offers some of the best panoramic views of the colorful slopes carpeted in vivid shades of red and orange. 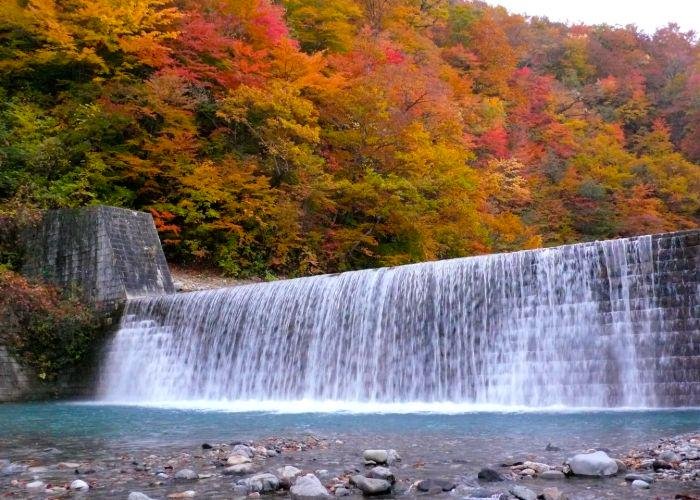 The mountains of Hachimantai span three prefectures and are among Tohoku’s best areas to enjoy kōyō. Some epic locations to head to include the picturesque Onuma Pond, which has an easy one-kilometer hiking route around the perimeter, and the volcanic Goshogake Onsen. 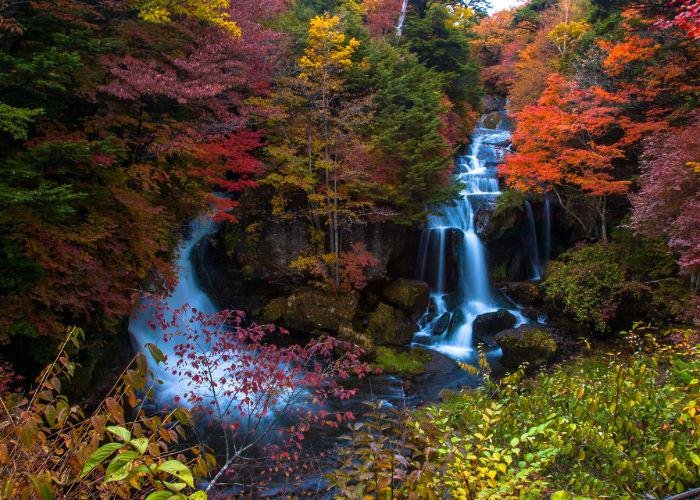 Okunikko, to the north of Tokyo and west of Nikko City, is bursting with stunning spots to see the autumn leaves in Japan. Ryuzu Waterfall finds itself surrounded by fiery red and orange trees, while the majestic 100-meter-tall Kegon Waterfall and scenic Lake Chuzenji are also extra impressive at this time of year.

Check out our guide on where to eat in Nikko to learn about the local specialties. 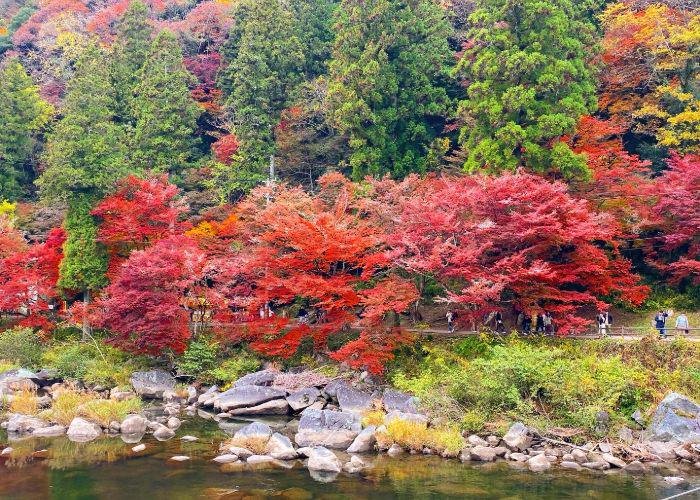 Korankei Gorge near Nagoya is renowned as one of the best places in the whole Chubu region to view fall foliage. There are around 4,000 Japanese maple trees along the Tomoe River and the path towards Kojakuji Temple, which were planted by a priest and local residents. One of the most photogenic spots is the bright vermilion Taigetsukyo Bridge, which has become a symbol for the area. 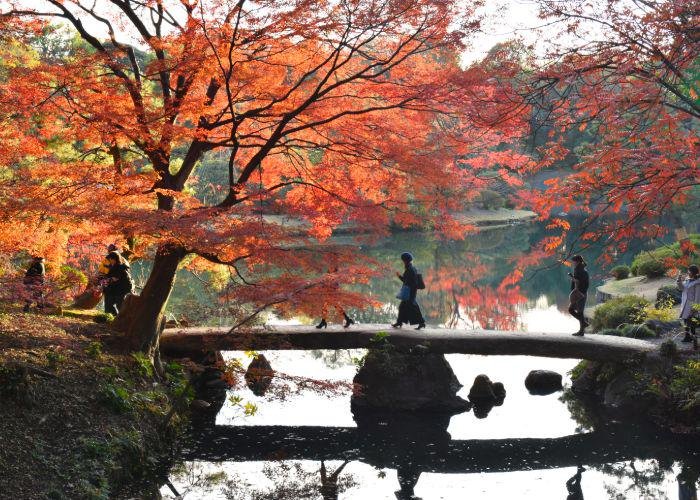 An Edo-era strolling garden designed to replicate scenes from six famous poems, Rikugien is undoubtedly one of the most beautiful spots for kōyō in the country. Head for the Tsutsuji no Chaya teahouse and Togetsukyo Bridge to admire the leaves, and consider staying late for the striking evening illuminations. 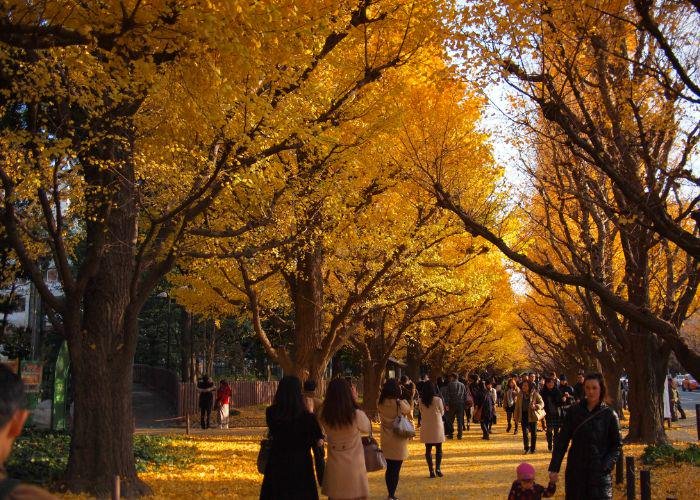 The Aoyama Icho Namiki ginkgo avenue in Meiji-jingu Gaien Park is a truly spectacular sight. The road is lined with towering ginkgo trees that turn a dazzling gold in the autumn to create a vivid tunnel over you and blanket the path beneath your feet with bright yellow leaves. 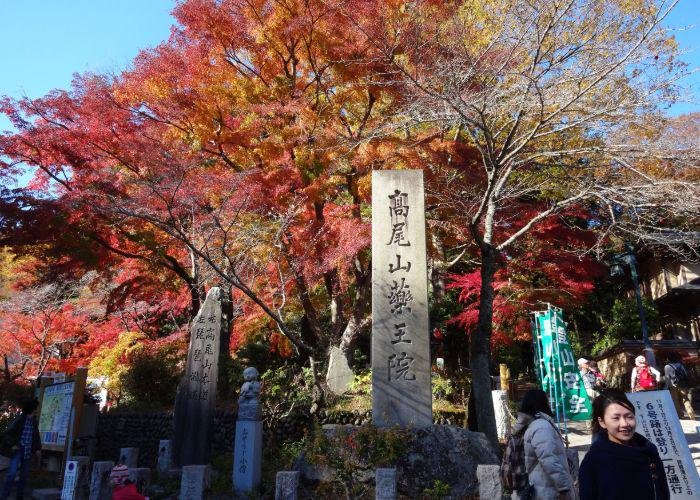 Takaosan is one of the closest hiking spots to Tokyo, making a fantastic day trip if you want to go walking among autumn leaves in Japan. Alternatively, you can take the cable car halfway up and admire the view in comfort. Be sure to stop by the colorful Yakuoin Temple on your way to the summit. 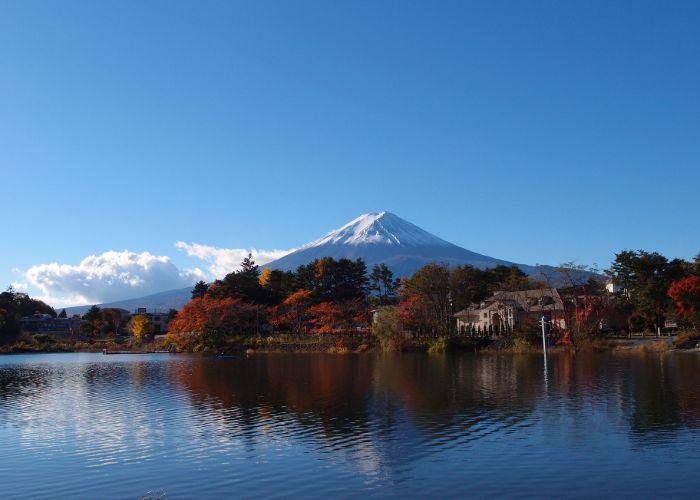 Located at the base of Mount Fuji, Kawaguchiko (Lake Kawaguchi) offers an unbeatable opportunity to view fall foliage and this iconic peak at the same time. The Momiji Corridor lined with about 60 Japanese maple trees is a particularly beautiful spot, and is lit up during the area’s autumn festival. 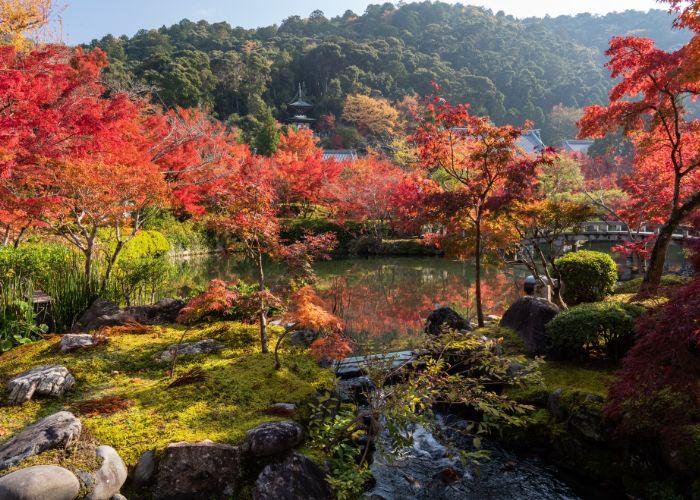 Kyoto is overflowing with breathtaking kōyō locations, one of the most famous being Eikando. The temple’s striking Tahoto Pagoda offers fantastic views out over the grounds as they’re transformed into a sea of vivid red and orange, while the garden circling Hojo Pond is delightful to stroll around – especially when illuminated after dark. 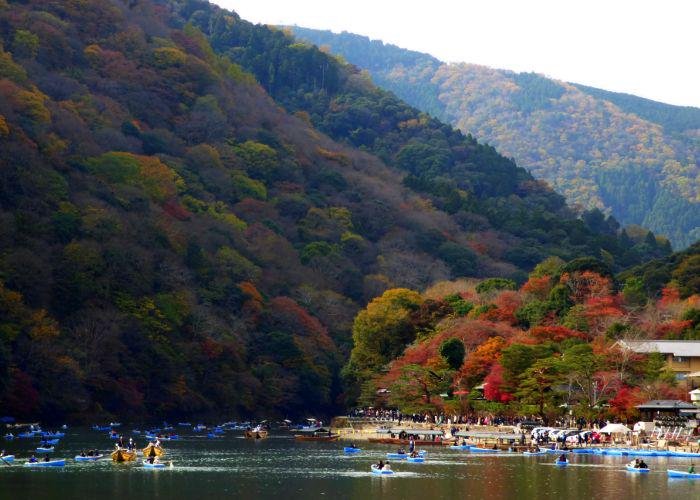 The Arashiyama district in western Kyoto might be best known for its bamboo grove, however it’s also a wonderful spot to view autumn leaves in Japan. The image of the Togetsukyo Bridge with the forested mountainside behind it ablaze in hues of red and yellow is unmissable. For a truly serene experience, rent a boat and enjoy the views from the water. 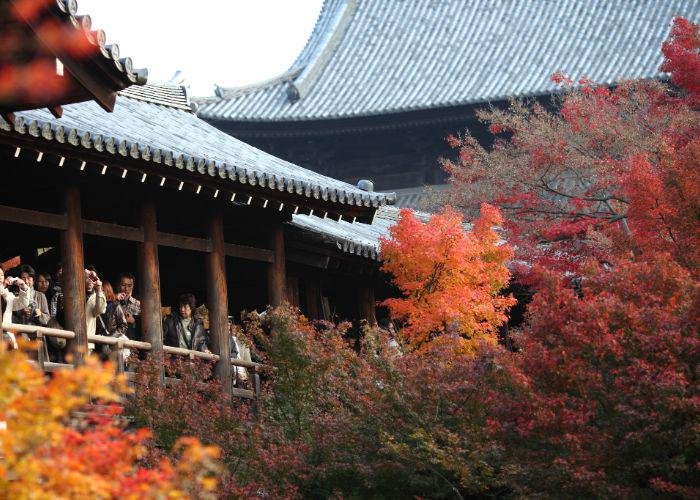 Easily one of the most legendary spots in Japan for kōyō, the autumn leaves at Tofukuji Temple will take your breath away. The highlight here is Tsutenkyo Bridge, which soars across a valley of Japanese maple trees – the view is equally impressive from on the bridge as it is admiring it from afar. 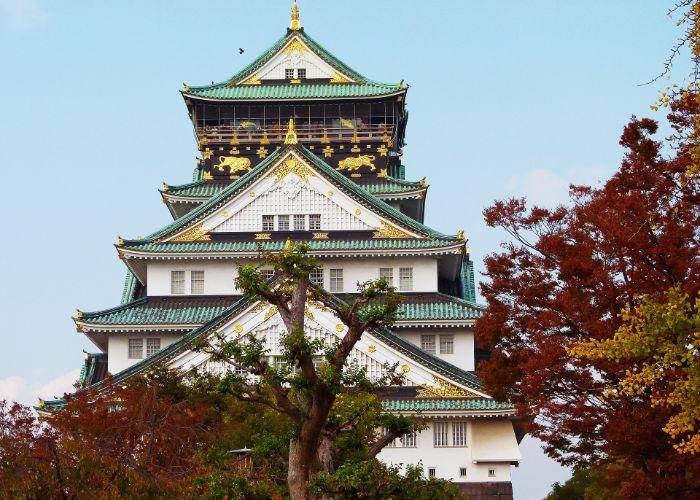 Osaka Castle is one of the most iconic and beautiful sights in the city, and it becomes even more attractive during the fall when the ginkgo trees turn a glorious golden hue. Climb to the top of the tower for a panoramic view of Osaka in all its autumn splendor. 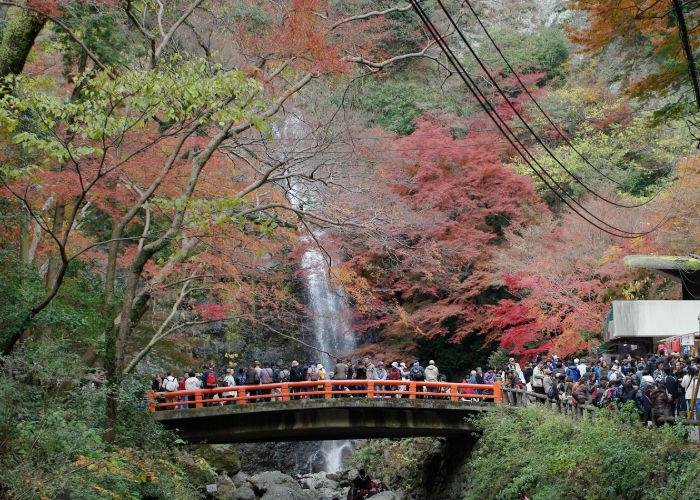 This forested region just outside the bustling city is one of Osaka’s top spots for viewing autumn foliage in a natural setting. Take the three-kilometer hiking path to the cascading Minoh Waterfall to reach the most picturesque location – be sure to pick up some sweet fried maple leaves on your way!

The 280-meter-long Hoshi no Buranko suspension bridge in Hoshida Park is one of the absolute best places to view autumn leaves in Japan – as long as you’re not afraid of heights! Soaring 50 meters above the ground, it offers unrivaled views of the forested valley below. 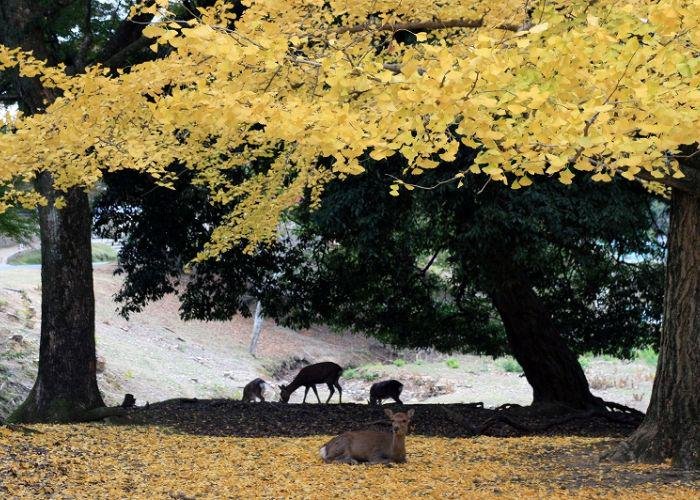 To enjoy autumn leaves in Japan with an extra cute vibe, Nara Park is the place to go. Here you can watch adorable deer frolic among the golden ginkgo leaves and crimson Japanese maple trees, as well as admire the sights of Kasuga Shrine, Todaiji Temple, and Kofukuji Temple’s stunning five-storied pagoda. 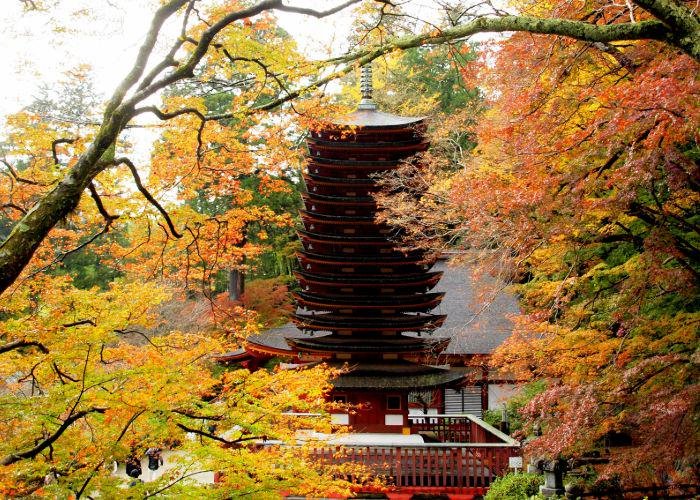 This stunning shrine to the south of Nara prefecture seems to have been made especially for viewing fall foliage. Its unique 13-storied pagoda is surrounded by approximately 3,000 Japanese maple trees, and the balcony of the shrine’s main hall is lined with dark metal lanterns that contrast beautifully with the red leaves beyond. 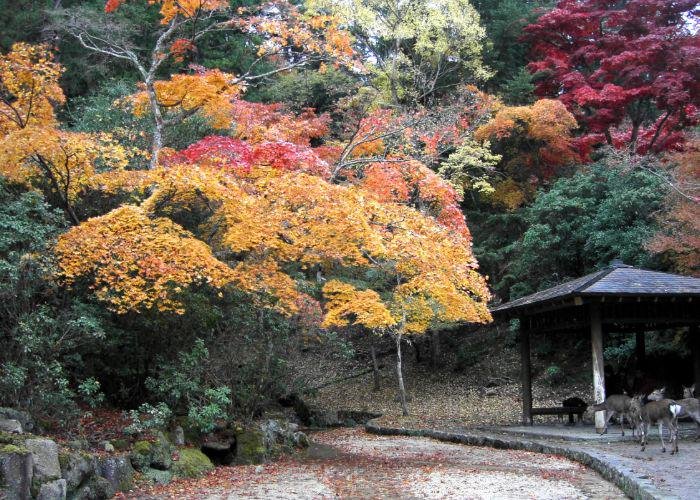 Miyajima island’s Momijidani Park and sacred Mount Misen are both transformed into oceans of blazing red and orange during autumn. Hike up to the summit for a magnificent aerial view, or stroll across the scenic vermilion Momijibashi Bridge to feel as though you’re walking through a painting.

Hit downtown Hiroshima with a tour guide and taste local specialties during the Food Tour Adventure in Hiroshima at Night!

These are just some of the many achingly beautiful locations to view autumn leaves in Japan. The sight of the gorgeous red and gold fall foliage will be something you never forget, so try and get out and explore as many kōyō spots as you can!

Ready to start planning your next trip to Japan? Browse online experiences and in-person food experiences in Japan!

We strive to be as accurate as possible and keep up with the changing landscape of Japan’s food and travel industries. If you spot any inaccuracies, please send a report.
4
Click clap if you like this post
Ashley Owen
Ashley is a freelance travel writer from the UK who spent the last two years living in Japan, and is about to embark on her next adventure to New Zealand. She's always on the lookout for exciting new vegan treats wherever she goes!
SEE ALL POSTS
You may also be interested in
Culture