Walking along the busy aisles of Shibuya’s Tokyu department store if you head towards the cashier on the B1F you might stumble across a small unassuming sushi shop, if you’re looking for it, it might be a bit more challenging. It’s slightly hidden away from the other food stalls, but the traditional navy noren (traditional Japanese curtains) covering the entrance signifies that you’ve come to the right place. It’s rather small and unassuming, but sitting here is one of the best-rated non-Michelin starred sushi shops in Tokyo, Uoriki Kaisen.

Uoriki Kaisen translates to “strong fish” and that’s representative of the business here. First and foremost, the business is a seafood retailer supplying supermarkets and department stores with fresh seafood directly from the world-famous Tsukiji Fish Market. They have access to some of the best fish on a daily basis and because of this, they are able to supply high-quality fresh fish at competitive, reasonable prices. The shop itself is very popular and rated very highly with 4.7 stars on Google which is hard to find in Japan without it being in the Michelin Guide. 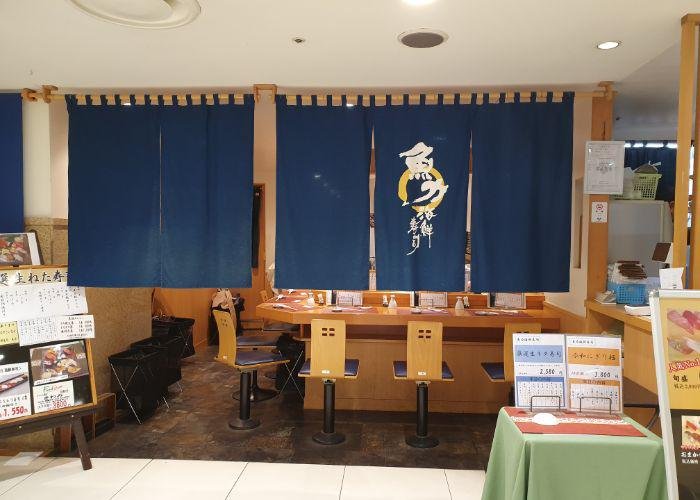 Chairs are lined up neatly outside indicating that this seemingly quiet shop can see longer queues during peak hours. Luckily, I arrived at 11:15am as there was no queue with only a couple of other customers seated inside.

The interior is casual with light brown, wooden counters with the seating facing the two sushi chefs in action. They are older in age, and you can tell that they have been practicing this art form for many years. They use the knife with ease and precision and have warm, welcoming smiles. You can hear the hustle and bustle of life outside, with the constant Japanese chatter of staff welcoming customers to the store, and the beeping of check out machines. Inside, there’s quiet chatter from local women having a catch-up over their seafood bowls, and silent salarymen having a quick energy refill before carrying on with their day.

There were many options on the menu, including shun mori (seasonal ten-piece sushi set), hon maguro kamatori nigiri (bluefin collarbone fatty tuna set) and kaisendon (seafood rice bowl) and other nigiri sets that come with a side of miso soup. They also offer sushi a-la-carte, as well as sushi rolls. I opted for the eight-piece omakase nigiri set which costs ¥1,500 and comes with miso soup. Once you place your order, one of the staff brings over a hot cup of matcha tea. 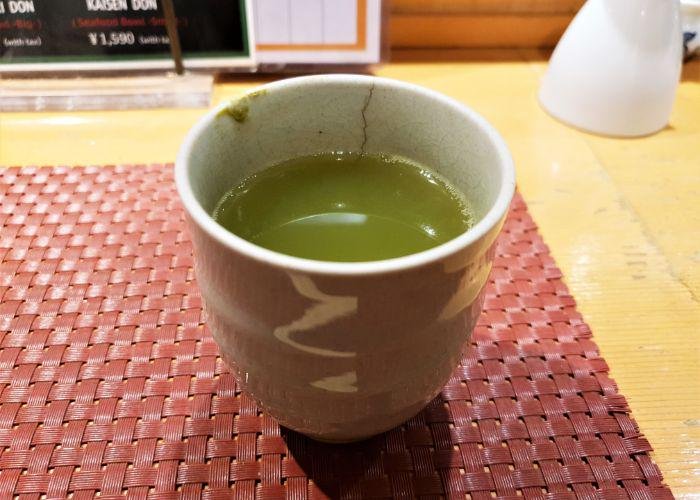 I sit watching one of the chefs prepare my meal, placing each piece with extreme care. He moves them around, changing the order on the wooden platter. His hands work fast but apply each slice of fish atop the rice with great precision, with a light dash of wasabi between the two. Within a short while my eight-piece set is ready to be eaten, and I couldn’t be happier. The smiling chef hands over the neatly presented wooden platter with eight gorgeous pieces of sushi on top. The top right corner plays host to a generous amount of gari (pickled ginger) to cleanse the palate after each bite. The treats on offer were tuna, sawara (Spanish mackerel), sanma (Pacific saury), hata (grouper), hamachi (yellowtail), salmon roe, ebi (prawn), engawa (flatfish), and tamago (sweetened egg omelet). 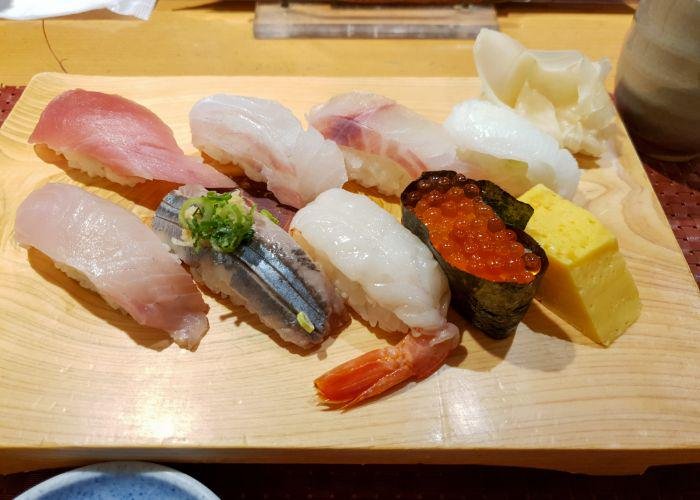 I uttered “itadakimasu” before digging in. First, I tried the ebi which was lovely and light, very smooth and had the perfect amount of wasabi. The dash of wasabi on each piece was perfectly balanced and just right as it first sings on your tongue, before making its way up to your nose. It wasn’t overpowering or bitter like most wasabis, which leads me to think that they use real, fresh wasabi which is notably lighter than the typical wasabi you get with sushi. It was perfect, and I found that balance with each nigiri I tasted. 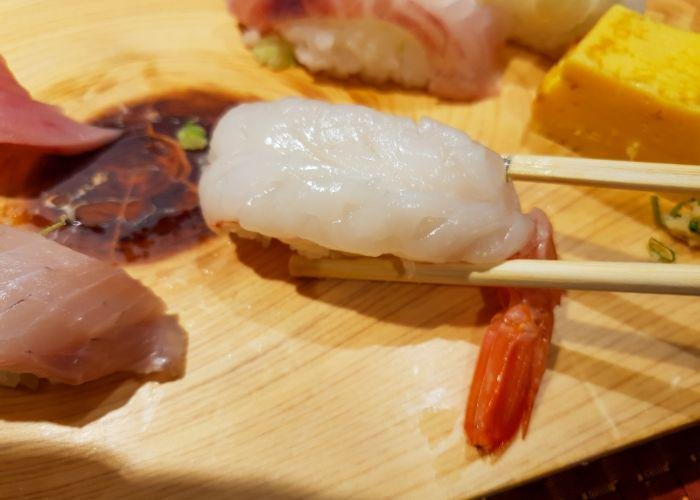 The miso soup arrived and was notably savory and salty and a little fishy in taste. I discover that there are three clams inside and their shells gently clink together with each sip. I swirl the bowl it to mix the soup and it’s like watching tiny volcanic eruptions of sand swirl under the salty sea. It’s nice, but a little too salty for me. 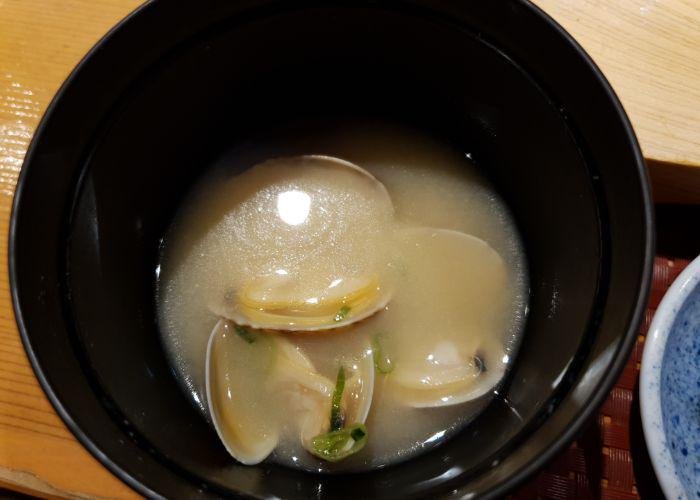 I have to admit that I have never tried salmon roe before, having always been a little afraid of it. My concern lies primarily in the texture and the taste. I, personally, don’t like it when things pop in my mouth, like bubble tea, and I was worried about the fishy taste it might have. For fear of being rude, and for the thought that here is the best place to try it than any, I picked it up and popped it into my mouth wishing for the best. Luckily, it was a hit. I say hit, it was actually a lot better than expected, not my favorite option, but maybe one that can grow in the future. 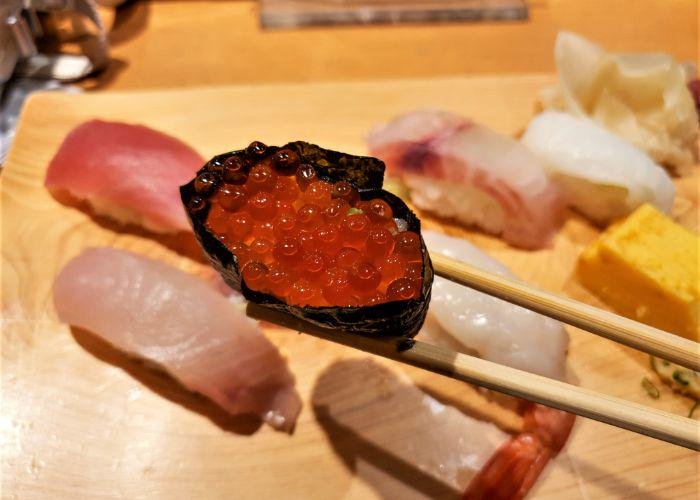 Each piece was notably light, fresh and soft, not tough like other (I assume) bad quality sushi I’ve had in the past. None of them had an overwhelming fishy taste suggesting their freshness. The only slightly below par one was the engawa which was slightly tough. My favorite had to be the tuna, and I have had other tuna nigiri in the past that was too thick and not cut against the grain, making it almost crunchy, most likely form low-grade fish, but this was the complete opposite. I knew this shop served various grades of tuna, so I tested my somewhat ropey Japanese and ordered two pieces of ōtoro, one of the highest quality fatty cuts of tuna.

The ōtoro caught my attention while scrolling on Instagram before I came. I saw some pictures of it and I was astounded. They looked like strips of A5 quality, Kobe wagyu. Once I ordered a self-restrained two pieces, I waited excitedly to see it for myself in real life. I can happily say that they exceeded my expectations. The marbling of fat on these cuts of fish was nothing like I had ever seen before, and they were generous slices of light, blush-pink, fatty tuna. 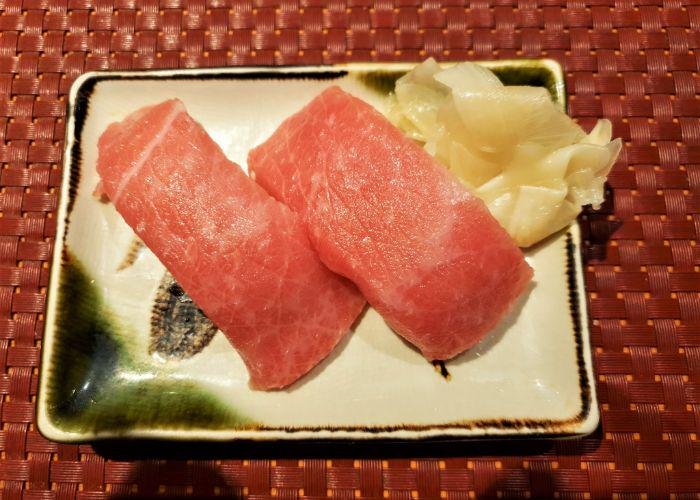 The food critic in me tried a small bite without the rice, attempting some self-restraint. I bit down and it was like butter. The cliché melt-in-your-mouth springs to mind, but I’m trying not to be that basic, although it is hard because that’s exactly what it did. If it wasn’t for the rice, I can honestly say you wouldn’t need to chew at all. The tuna to rice ratio was extremely generous with a large slice presented on top of minimal rice. This led to the smallest whisper of wasabi as not to overpower the gentle flavor of the fish. The two pieces cost just over ¥900, which could be a little pricey you might say, but in my option, it’s a million percent worth it. 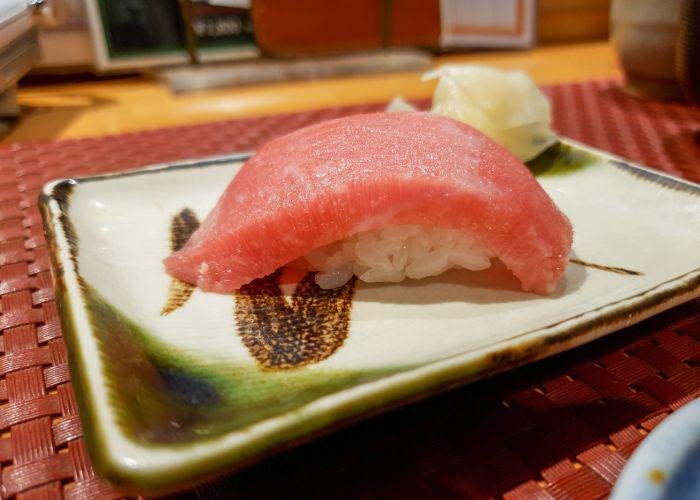 This is some of the best quality sushi I’ve had while in Japan, at some of the most affordable prices. You need to go and check this place out for yourself!

Cash and card accepted, so no need to worry about cash.

Try to go on a weekday and at off-peak hours to avoid queues.

Directions: Look for the fresh produce and cashier area then go to the right and you will see the blue noren.