Miyagi is known for their historical attractions, onsen resort towns, and iconic picturesque seascape views that attract people from all over. The Miyagi Prefecture faces the Pacific Ocean and is located in the central part of Tōhoku with Sendai being the largest city. Matsushima is made up of 260 small pine grove covered islands and it is known as one of the three most scenic views in Japan. There are many quirky attractions to the area such as Zao Fox Village, where foxes roam freely, Cat Island, with over 100 resident cats, and Tanabata Festival which attracts more than two million visitors at the beginning of August.

As many of the towns and cities are situated along the coast, it is no surprise that fresh seafood plays a big part in the food culture here. Although devastated by the 2011 Tōhoku earthquake and tsunami, the region has made a great recovery and now’s the time to go out and explore the food scene within Miyagi. Our guide to what to eat in Miyagi is going to tell you the local specialties that you must try when visiting Miyagi Prefecture.

Here are some of the top Miyagi foods to try during your travels! 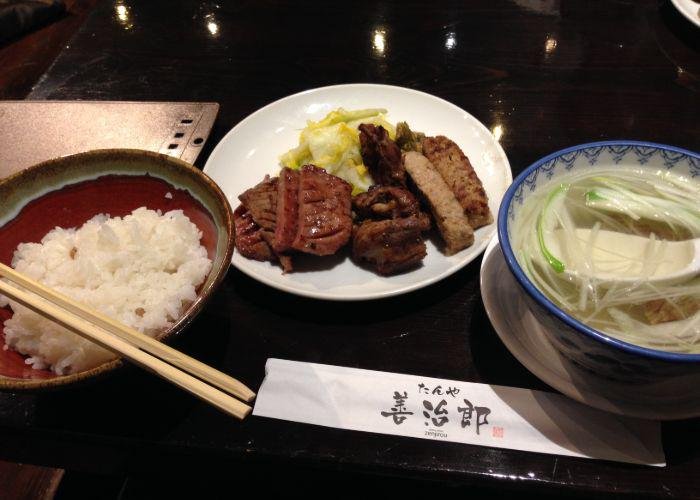 The love for gyutan (grilled beef tongue) is a relatively new one as the dish only came about post World War II. It began at yakitori restaurants in Sendai’s Ichiban-cho area where a local chef realized that he would make more money and reduce waste by making use of parts that were often thrown away, such as tongues and tails of the cow that was left behind by the US forces. Now, it is one of the most beloved dishes of the region. It’s typically grilled over charcoal to bring out the flavor of the meat. Each establishment grills the beef tongue and seasons it with its favored seasoning; salt, miso or their own special sauce. It’s often served as a part of a set meal with rice and barley, oxtail or miso soup, and pickled vegetables. 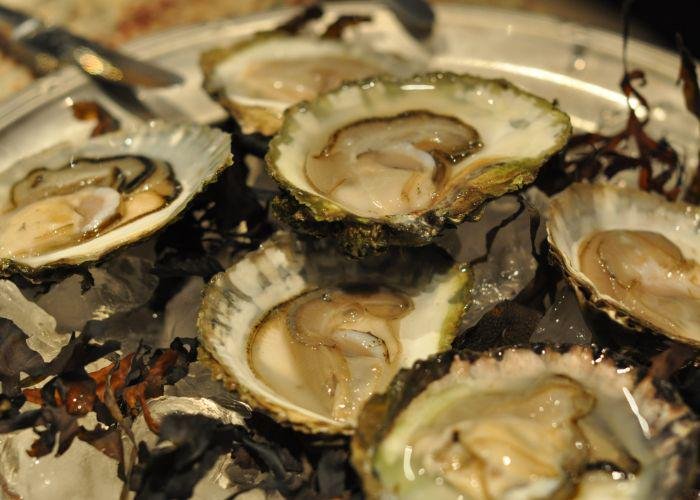 One type of seafood that the area is renowned for its oysters, particularly from Matsushima. This delicacy is only available between October and March, so be sure to plan your trip accordingly. Onagawa and Matsushima are known for their all-you-can-eat oyster restaurants and if you venture to Miyagi during the start of February, don’t miss the Oyster Festival. There are a variety of ways to eat oysters, but we advise you to try them raw first, particularly if they’re super fresh. However, if that doesn’t take your fancy, they can also be enjoyed fried or in a kaki-don (oyster rice bowl). 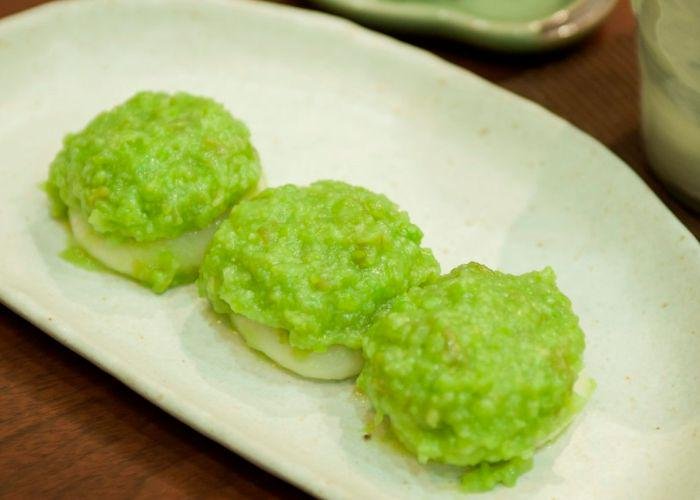 Zunda is a bright green sweet soybean paste. It is made by boiling edamame (young soybeans, which gives it its notable bright green color), crushing them, and then seasoning them with sugar and salt. There are a number of ways of enjoying this sweet treat: from cakes and mochi to ice-cream and milkshakes, the options are endless, and all are delicious.

It’s the fishing city of Ishinomaki who we have to thank for the creation of this dish. Although the soba is a similar color to that of traditional soba, there is a difference; Ishinomaki yakisoba is made with a brown noodle. The brown soba is steamed twice before it is finally fried and as a result, it’s able to absorb more flavor from the sauce when cooked. It’s topped with a fried egg, giving you all that goodness that you could possibly want from a fried noodle dish. 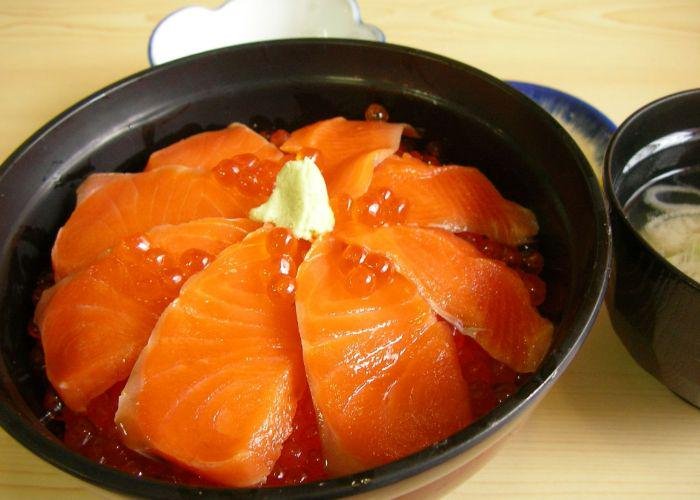 Harakomeshi is a traditional dish from the Watari area that consists of salmon and roe (harako) served on rice. It may seem like a simple meal, but we assure you that the salmon has a light melt-in-your-mouth consistency while the roe adds pops of salty-sweet umami flavor when burst. While it’s sold all year round, it’s considered best from September to early December and is so popular that shops at Sendai Station often swap out their pre-made bento to feature harakomeshi instead. 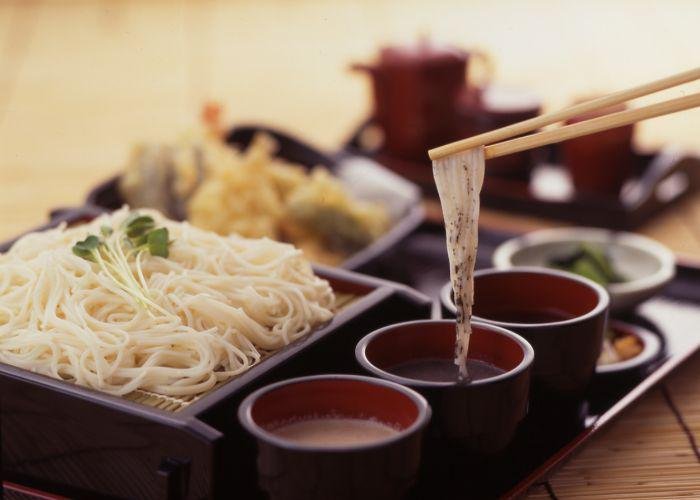 Shiroishi umen originates from Shiroishi City. It’s a light meal with a tradition going back over 400 years. Rumor has it that a child whose father had a stomach illness was taught to make the noodles by a traveling monk. Shiroishi Castle then named the noodles “umen” (warm noodles) in honor of the warm, compassionate heart of a child who is devoted to their parents. The short wheat flour noodles are smooth and are prepared without oil, making them easy to digest. The noodles can be served hot or cold, so it’s perfect to eat all year round. 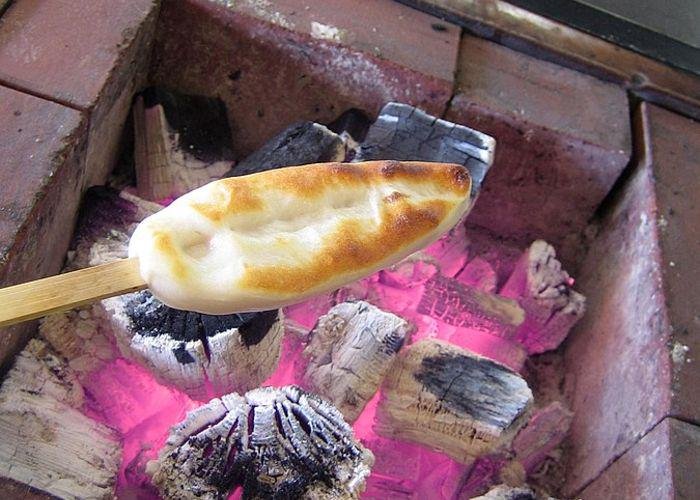 Kamaboko are fish cakes that are made by forming minced fish into small loaves that are then seasoned and either baked or steamed, creating tasty, light fish cakes. It varies in texture from region to region, but specifically, sasa kamaboko is a bamboo leaf-shaped fish cake made with flounder fish. This type of fish cake is not usually served with any additional condiments and it is usually a side dish to accompany soups and rice.

As we have previously mentioned, being situated on the coast provides an abundance of high-quality fresh fish. Sendai zuke-don is a specialty rice bowl dish of fresh white fish marinated in a unique sauce. Zuke usually means marinated tuna, which is a method used to preserve both preserve sashimi and improve the taste. Sendai is conveniently located in one of the richest fisheries in the world, so they created a new-style zuke-don with white fish which is light and flavorful. 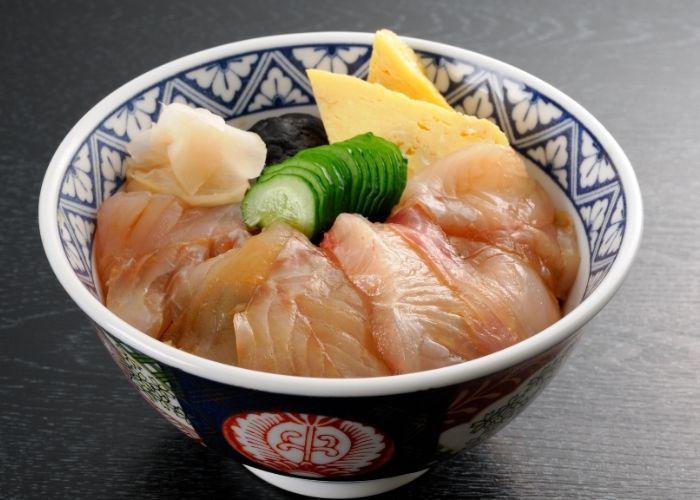 Aburafu is deep-fried wheat gluten which is simmered in a sweet-salty mixture of soy sauce and sugar and donburi is a rice bowl. This dish was handed out in the Edo Period when the castle town in Toyoma was prosperous. It’s mixed with a multitude of vegetables such as mushrooms, spring onion, ginger, leeks and is then topped with an egg or made into egg-drop soup. The concept of deep-fried gluten doesn’t float everyone’s boat granted, but it’s low in fat and extremely tasty and is sure to warm you up on a cold evening. 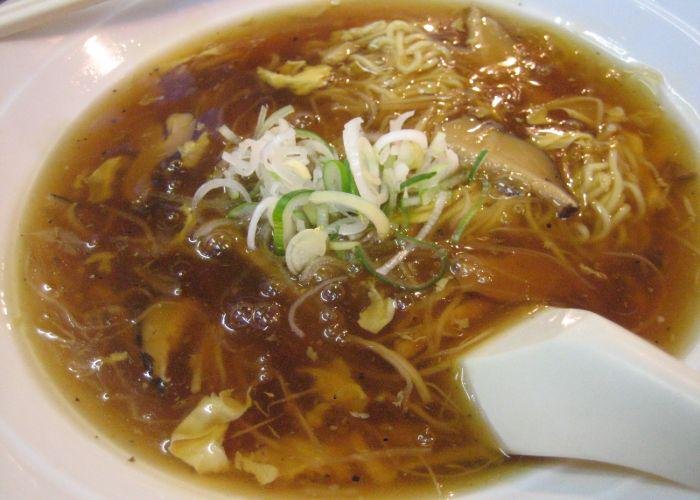 The most authentic shark fin in Japan can be found in Kesennuma City. Shark fin can be enjoyed in a multitude of ways including raw, boiled or the newly created shark burgers and the popular shark fin soup. Many hope that the rise in popularity of shark fin will help bring more business for Kesennuma’s fishermen. However, there have been tougher international regulations by shark protection groups requiring the use of the whole shark, instead of just the fins.

Now you know what to eat in Miyagi, feel free to eat and explore your way around Miyagi Prefecture; a place where ancient food with compelling backstories are still enjoyed hundreds of years later. Whether it’s high-quality fresh oysters, charcoal-grilled beef tongue or an Ishinomaki yakisoba of dreams, the Miyagi cuisine covers all bases making the most of their lush land and abundant ocean.

We strive to be as accurate as possible and keep up with the changing landscape of Japan’s food and travel industries. If you spot any inaccuracies, please send a report.
20
Click clap if you like this post
Georgie Morgan
Georgie is a photography enthusiast, ramen obsessed and a self-confessed travel addict. She has visited 49 countries and counting and enjoys eating her way around the world trying unique foods that are specific to each country and region she visits. She hates breakfast food, loves spicy food and can eat eight tacos in two minutes.
SEE ALL POSTS
You may also be interested in
Travel Tips