10 Japanese Food Movies and Anime to Marathon at Home

As food culture is huge in Japan, it’s no surprise that there are countless Japanese films and anime that revolve around Japanese cuisine.

Delve into Japanese culinary culture by watching these 10 top-rated Japanese food movies and anime, all while you stay home, snuggled up under your blanket.

Here are 5 Japanese food movies to marathon at home.

Nothing is more central to Japanese food culture than ramen. Tampopo is a Japanese classic that involves a huge cast of wacky characters, each with their own food-related storylines.

In the beginning, the film follows two truck drivers, Goro and Gun, who seek solace in a humble, local ramen shop during a heavy downpour. The owner of the store, Tampopo, is a troubled widow who’s striving to create the perfect ramen recipe, and naturally Goro and Gun decide to lend a helping hand on her quest. A mix of comedic and heartfelt moments, Tampopo is definitely one to watch, even better if you do so while slurping a bowl of ramen.

Jiro Dreams of Sushi is a documentary about the life of Jiro Ono, the legendary sushi master behind the Michelin-starred restaurant, Sukiyabashi Jiro. The supporting roles are Jiro’s sons who are both sushi chefs, following in their father's footsteps. Watch the compelling story of Jiro Ono, a man who has dedicated his life to the pursuit of perfect sushi, and his sons who have inherited both his legacy and the pressures that come with it.

Sweet Bean is a movie with the Japanese pancake dorayaki at the forefront. This treat is made of a generous amount of sweetened azuki bean paste sandwiched in the middle of two pancakes.

Watch this moving Japanese film, which follows the friendship of a dorayaki store owner and a 76-year-old woman with a secret sweet red bean recipe. As he teaches her the techniques of dorayaki making, Sweet Bean sheds light on the central morals involved in Japanese culinary culture, including patience, perseverance, and dedication. Not only does this movie teach you the meticulous yet satisfying process of making dorayaki, but the relationship between the two main characters also pulls on your heartstrings.

4. Akanezora: Beyond the Crimson Sky 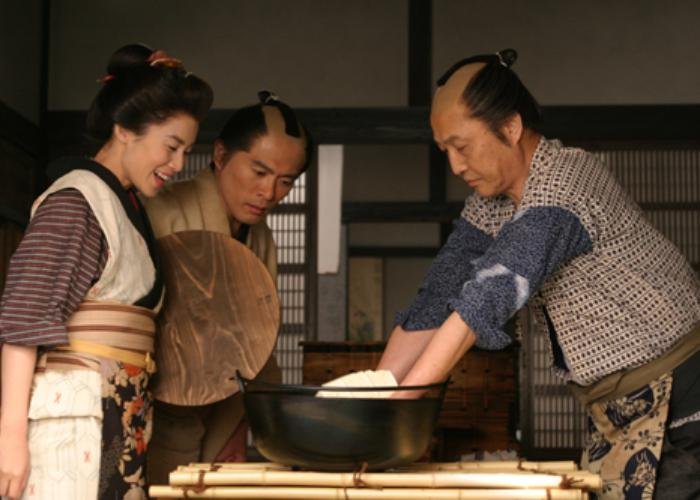 This Japanese movie is set in the mid-1700s in Edo, which is now known as Tokyo. Akanezora: Beyond the Crimson Sky is based on an award-winning novel by the famous Ichiriki Yamamoto, and it follows the journey of a young tofu maker, Eikichi, who travels across the country, seeking to set down roots for his very own tofu-making business.

As Eikichi learns the tofu craft from a famous master in Kyoto, he realizes that his tofu doesn't suit the taste buds of the locals in the Edo region. Akanezora: Beyond the Crimson Sky not only comments on the variety of regional dish variations around Japan, but also educates about the place of tofu in Japanese cuisine and the beauty of its creation process.

5. Papa’s Lunchbox is the Best in the World

There’s nothing like a packed lunch from a mother. Papa’s Lunchbox is the Best in the World offers a twist on the traditional family dynamic. Instead of having the matriarch of the family preparing the lunchbox, or bento in Japanese, this movie follows the journey of a father as he struggles to prepare bentos for his high school daughter.

Papa’s Lunchbox is the Best in the World offers an insight into the importance of the bento. Traditionally, a bento always contains rice and one main dish with several other side dishes, all presented appealingly. While many may feel like it’s just an ordinary lunch meal, Japan takes it to a whole new level. By the end of the movie, you’ll learn that the Japanese bento is not just about the food, but the love, connection, and dedication put into it by family.

Here are 5 Japanese food anime to watch at home.

Bartender pays tribute to the exquisite drinks one can get at an upscale bar and shows the art of concocting elaborate cocktails. This isn't the entire premise of the show, however. The customers come in with a set of problems of their own, and the bartender aims to help them with soothing, flavorful drinks.

Craving the kind of connection you used to have at your local bar? Join the Online Happy Hour in Japan for a virtual cocktail class and a chat with a food tourism professional in Tokyo.

One of the first Japanese food anime on your list should definitely be Shokugeki no Souma. This anime is arguably one of the most popular cooking anime series ever, and it follows a teenage boy’s journey on his quest to become the best chef in his culinary academy.

The culinary school is known for "food wars" where students compete in cooking challenges to showcase their skills. The elaborate acts and unbelievably real-looking dishes will get you into the competitive spirit of Shokugeki no Souma.

Another Japanese food anime to have on your list is Yumeiro Patissiere. It’s no secret that the Japanese are head over heels for pastries, and this anime just emphasizes the significance of baked goods in everyday Japanese life.

While the anime series targets the younger, female audience with a dash of romance, it’s suitable for everyone to watch. With competitive cooking and mouth-watering baked goods, best believe that you’ll be craving a pastry after every episode of Yumeiro Patissiere.

Named after the main character of the anime, Toriko follows the adventures of a food investigator who aims to find the most unique ingredients in the world. His trusted partner, Komatsu, joins in on the journey. While it may sound like a peaceful experience at first, expect more than a few fighting scenes in every episode.

The duo faces obstacles like monsters that they have to fight and conquer, and these rare beasts are used as ingredients as they piece together their dream "Lifetime Full Course Menu."

Take a breather from the standard cooking anime and get started on Ben-to, a comedy/action anime about people battling over the best food discounts offered at the supermarket. From this anime alone, you’ll see that the Japanese don’t kid around when it comes to their bento.

Give these Japanese food movies and anime a watch and dive into the culinary culture of Japan, without even hopping on a plane. From the history of ramen and sushi to the significance of lunch boxes, it just goes to show that cultural immersion can still be achieved even when you stay at home.

Want to watch more Japanese content? Check out these 10 Japanese dramas or take a virtual Japan tour with these 10 travel videos!

We strive to be as accurate as possible and keep up with the changing landscape of Japan’s food and travel industries. If you spot any inaccuracies, please send a report.
0
Click clap if you like this post
Azra Syakirah
Usually tucked away in a cafe anywhere she goes, Azra Syakirah is a fashion designer and entrepreneur living in Tokyo, Japan. Born and bred in Singapore, her heart belongs to the world. Also a language enthusiast, she virtually scribbles her thoughts on a blog as well as freelances as a writer.
SEE ALL POSTS
You may also be interested in
Tokyo