Just a stone’s throw away from flashy Tokyo, Yokohama is the girl next door. A chill and down-to-earth city with gorgeous natural scenery, flourishing Japanese gardens, and cute cafes, Kanagawa's capital also has a vibrant downtown area. Rivaling Tokyo by population as well as with its diverse attractions like Yokohama Chinatown, Sankeien Garden, and Yamashita Park, Yokohama is also a very liveable and family-friendly city with ample parks and greenery to break up the skyscrapers and office buildings.

Ever since the tiny fishing village first opened up port in 1859, just before the Meiji Restoration, letting in Western ideas, inventions, and cuisines, Yokohama began to rapidly Westernize and pioneered many Western developments in Japan. Ice cream, tennis, photography, gas lamps, and beer were all first introduced in Yokohama before spreading throughout Japan. Soon, the port became a hub of foreigners, like sailors and merchants, and for a brief moment in history, there was even a "Yokohama Dialect" or "Yokohamese," a pidginized form of Japanese used between foreigners and Japanese locals. The food equivalent of this would be yoshoku, Western-inspired Japanese dishes such as korokke (croquettes) and omurice (an omelet stuffed with fried rice).

Yokohama has always been a city on the cutting edge, adapting and remixing traditionally Western or Chinese dishes with a unique Yokohama spin, and this diversity of culture and people in Yokohama is still apparent today. One moment you’ll be walking down the cobbled brick of Motomachi, a shopping street with a certain European je ne sais quoi, and the next you’ll find yourself in line for a steamed bun at Yokohama Chinatown, drawn in by the magnetic force of the crowd.

Stuck for what to eat in Yokohama, you might be tempted by the Shin-Yokohama Ramen Museum or Cup Noodle Museum, but don't get trapped inside on a beautiful day, explore Yokohama's diversity of food with these local Yokohama food specialties!

Here are some of the top foods to try in Yokohama, Kanagawa's capital. 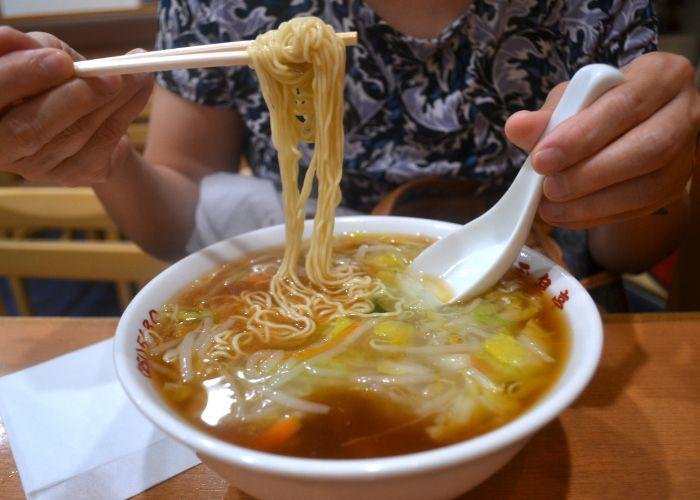 Originating from Yokohama Chinatown, sanmamen is the specialty ramen of Yokohama. Sanmamen consists of a bowl of light, soy sauce-based ramen, topped with stir-fried vegetables like cabbage and bean sprouts, as well as wood-ear mushrooms and pork. The noodles are thin, straight, and super slurpable, and the veggies pack a satisfying crunch. This is a perfect dish for veggie-lovers, as the natural sweetness of the cabbage and carrots can really shine.

While ramen is known as an iconic Japanese noodle dish all over the world, it is actually derived from the Chinese "lamian." A dead giveaway to its Chinese origins, ramen (ラーメン) is written in katakana, the Japanese alphabet used for loan words and onomatopoeia. Sanmamen is the first, but certainly not the last, Chinese-inspired Yokohama dish in this guide to What to Eat in Yokohama.

If you're a fan of ramen, make sure to check out the Cup Noodle Museum in Yokohama during your visit.

Gyu-nabe is another dish with a Yokohama origin story. The forerunner to Kanto-style sukiyaki as we know it today, gyu-nabe is usually made in a cast-iron pot. Large chunks of beef and other ingredients like vegetables and mushrooms are cooked up in the pot, simmering in soy or miso-based sauce until juicy and tender. Perfect for a big party or family get-together, cooking gyu-nabe is a communal activity reserved for special occasions, especially during the winter holidays.

While gyu-nabe is a uniquely Yokohama dish, it only came about 150 years or so ago with the ushering in of the Meiji Restoration, a time of rapid Westernization and modernization. Comparatively, the Japanese had stuck to a meatless diet for around 1200 years, as Emperor Tenmu had banned the consumption of meat in Japan in 675 AD. However, the Japanese also had a long-standing belief that meat had medicinal properties, and some aristocrats indulged in game hunting a few times per year despite the ban. In 1872, the Meiji Emperor finally put an end to the taboo by eating beef to celebrate the New Year. It was a radical move, as the consumption of meat was considered uncivilized and heavily associated with the West. But it was also commonly believed that the consumption of meat was the source of Westerners' strength, so embracing Western meat-eating culture (in addition to other inventions and ideas) was thought to revitalize Japan. 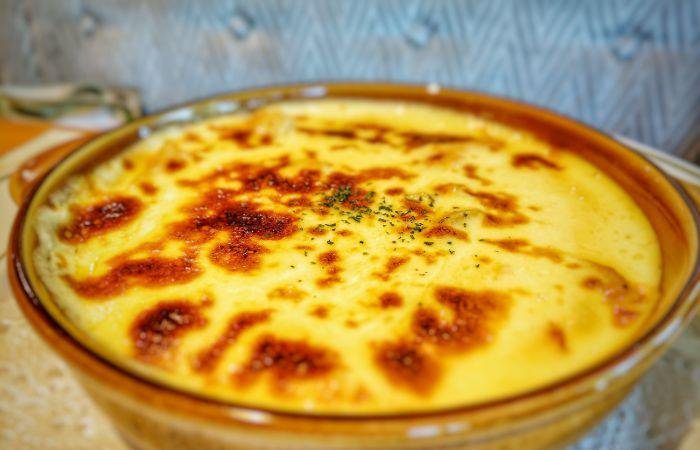 Creamy, cheesy, and carby... What's not to love about doria, a must-eat Yokohama dish influenced by Western cuisine. Doria is a baked, casserole-like dish made with a generous amount of béchamel sauce and cheese, and often with seafood or meat. This delightful, decadent celebration of dairy and carbs came to be in the 1930s at the Hotel New Grand in Yokohama. Chef Saly Weil of Switzerland was tasked with coming up with something soothing and warm to serve a sick guest at the hotel, and she created doria, a Japanese take on the French gratin, using rice rather than potatoes. These days, there are numerous takes on this classic Yokohama dish, not just seafood or meat doria, but also Japanese curry doria. In whatever form it takes, this Western-style Japanese dish (yoshoku) is the perfect comfort food.

Another Yokohama yoshoku dish, spaghetti napolitan also came to be at the historic Hotel New Grand in Yokohama. When General MacArthur used the hotel as headquarters towards the end of World War II, Chef Irie Shigetada had the responsibility of cooking for him and the U.S. generals. To suit their American taste buds, Chef Shigetada made spaghetti napolitan with the ingredients he had on hand: spaghetti, tomato paste, garlic, onion, mushrooms, and ham. It was so well-received that other hotels in the area got wind of this new dish, and started making their own versions. And while these days spaghetti napolitan is usually made with a ketchup-based sauce (cue the collective cringing from Italians worldwide), the original spaghetti napolitan can still be enjoyed at Hotel New Grand. 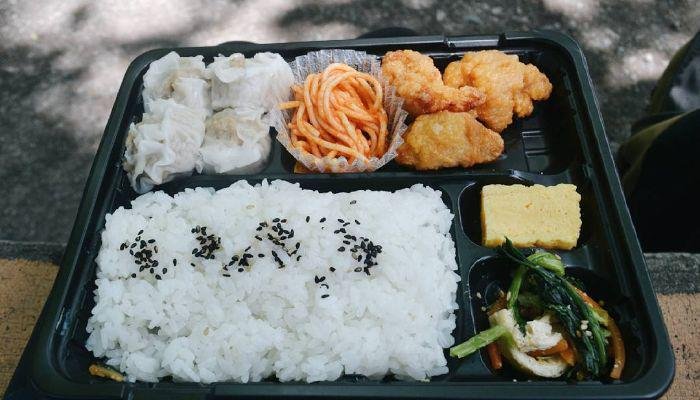 Just passing through Yokohama and in need a quick lunch or something to take on board the shinkansen? Many stations in Japan have their own special ekiben (train station bento boxes) made with proudly sourced local ingredients and regional specialties; Yokohama's is the shumai bento. This iconic Yokohama bento features steamed Chinese-style dumplings, a testament to Yokohama’s melting pot of cultures. Kiyoken is the most famous maker of shumai bento, and has been selling their pork-and-scallop shumai since 1928. Their steamed dumplings are served with a dollop of karashi (Japanese mustard) for a hit of that sinus-clearing spice, alongside tsukemono (Japanese pickles), karaage (fried chicken), bamboo shoots, tamagoyaki, kamaboko (fish cake), and a generous serving of rice. But you don't have to go to a train station to find shumai bento; you can also purchase them in supermarkets and convenience stores all over Yokohama.

These fluffy, succulent steamed meat buns can be found nationwide, but the number one place to go to get nikuman is no doubt Yokohama Chinatown (Yokohama Chūkagai), Asia’s largest Chinatown with over 500 shops and restaurants. The massive nikuman here have a soft and pillowy exterior and an interior absolutely packed full with a generous serving of pork, juicy and bursting with flavor. And since you’re already in Yokohama Chinatown, why not try their other famous street foods. Read all about their scaldingly hot yaki shoronpo (pan-fried soup dumplings), custardy egg tarts, crispy-chewy fried sesame balls, and more in the Yokohama Chinatown Street Food Guide.

If you have a bit of a sweet tooth, you're probably wondering what to eat in Yokohama for a little afternoon pick-me-up or dessert. How about some creamy, decadent Yokohama ice cream? Japan’s first ice cream shop was established in Bashamichi in central Yokohama in 1869 by Machida Fusazo. While this ice cream shop no longer stands, there are still many ice cream shops in the area that are inspired by that original ice cream recipe made from eggs, milk, and sugar, as well as shops that put their own unique Japanese twists on this summertime favorite, making flavors like matcha green tea and goma (sesame) ice cream. Another Yokohama Chinatown specialty, annin soft serve, is a super smooth ice cream with a mild almond flavor and subtle sweetness; a refreshing dessert to follow up some of those heavier Chinatown street foods. 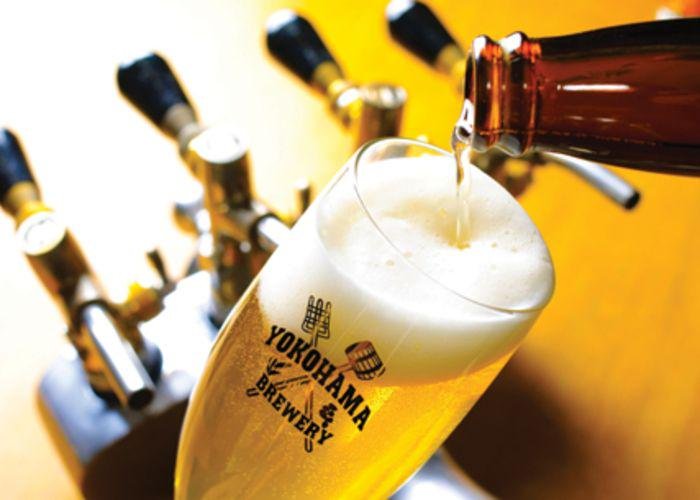 If you're craving a foamy pint or two, Yokohama, the birthplace of beer in Japan, should be on your list. Yokohama has more laid-back vibes than its somewhat wound-up neighbor, Tokyo, and is home to a vibrant jazz bar scene, the perfect accompaniment to a cold beer. And (as an added bonus) the lower rent prices mean lower pint prices so you can get more beer for your buck.

Notable Yokohama beer breweries include beer-brewing powerhouse Kirin Beer, which got its start as the Japan Brewery Company in 1885 before beginning to market their Kirin Beer in Yokohama in 1888, and more recently, Yokohama Brewery. Established in 2010, Yokohama Brewery has become a big contender in the craft beer world, not only in Yokohama but also across Japan, with beer aficionados praising Yokohama Brewery's hoppy flavors and bold beers. Kanagawa's capital is also home to the Great Japan Beer Festival Yokohama, Japan’s largest beer festival which is held every September. The Yokohama craft beer revolution is only growing stronger, so why not order up a pint or two, sit back and watch it all happen.

With options like sanmamen (Yokohama-style ramen), hearty and meaty gyu-nabe, Yokohama Chinatown street foods, and Western-style eats, hopefully, this Yokohama food guide has satisfied your curiosity about what to eat in Yokohama. And for more information about some of the best Yokohama restaurants and places to eat, check out our guide, Where to Eat in Yokohama. A stunning but often overlooked city where so many Japanese fusion cuisines were invented, you'll be able to truly taste the culture and history of this innovative and historic port city.

We strive to be as accurate as possible and keep up with the changing landscape of Japan’s food and travel industries. If you spot any inaccuracies, please send a report.
0
Click clap if you like this post
Rika Hoffman
Rika is a sourdough enthusiast, amateur film photographer, and pun-lover, born and raised in the suburbs of Philadelphia. A carb-based lifeform, she is always on the lookout for tasty bakeries in Tokyo.
SEE ALL POSTS
You may also be interested in
Yokohama

Where to Eat in Odawara