5 Places for the Best Breakfast in Osaka

The list of five spots with the best breakfast in Osaka that I’ll present to you contains no Japanese-style breakfasts. A few of the spots are inconveniently located—but I’ll explain why they belong here anyway. And it’s heavy on Japanese pancakes, because I’m crazy about fluffy Japanese pancakes. While I have no rice and raw egg here, I have managed to pick up some Osaka cafés that roughly fall into several categories: pancakes, local, and bakery, as follows.

Here are a few spots serving up tasty breakfasts in Osaka.

The Elk New York Brunch (in Abeno Q’s Mall near mega-tall building Abeno Harukas) serves a mean eggs Benedict with sausage, and some abnormally fluffy pancakes. The pancakes I make at home are flat and rubbery, but these are inches thick and light as air. How do they do it? I suspected an incredible amount of baking soda—but when I tried that at home it didn’t do the trick (though it did clear up my acid reflux).

At a recent visit to their other Osaka location near Shinsaibashi Station, I saw a staff member making pancakes in what looked like a large tako-yaki pan—that is, there were depressions to hold the shape of the pancake and prevent it from spreading out too much. I asked her why it was so fluffy and she told me it was whipped like a meringue. Then she put a cover over the top to gently flatten the top (no flipping), though it still ended up several inches tall. My cakes (I ordered two for 880 yen) were served warm off the griddle after a longish wait, with whipped butter and honey, and had the airy texture of a soufflé. This airiness takes time—more like baking a cake than frying. So be patient.

The atmosphere was relaxed—you pick up your own water and menus—and there was a variety of seating including a line of small tables near the entrance, a lounge area with plush sofas where some pretty girls were preening, and some 4-tops and more 2-tops toward the back. The lighting, background music, and customer chatter were all at comfortable levels.

I’m not that into interior decorating, but if the goal was to create spaces for various levels of intimacy that are interesting without being distracting, they have succeeded. Couples found privacy for quiet flirting in the back. A mom and her teen kid shared a larger table. Each area was suitable for its purpose and all customers could find a space to their liking.

The atmosphere at the mall location is more brightly lit, as is typical of mall shops, with a New York industrial theme décor, but it has a more extensive menu and is close to Tennoji Park and Zoo, shopping at the mall, and the view from Japan’s tallest skyscraper. For the shop itself, Shinsaibashi is better. 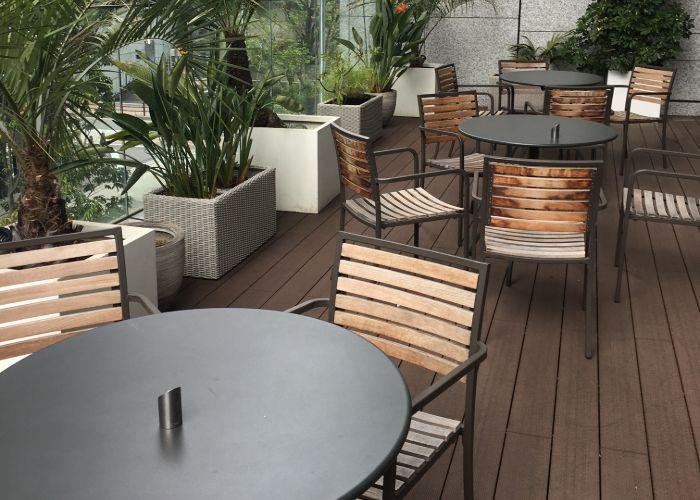 Competing in the Hollandaise Sauce ‘n Pancake category, but with the strong addition of omelets, is Eggs ‘n Things at EXPOCITY, which is a stone’s throw (if you have a very good arm) from Expo Memorial Park and its lovely Japanese gardens. Between the Elk and Eggs n’ Things, one of these may offer the best pancake in Osaka.

This chain also has a second location, just a block and a half from the backside of the familiar Kinokuniya bookstore at Hankyu Umeda Station. When I visited this shop, a staff member was piling up a huge stack of fluffy pancakes ready for the addition of various toppings when the orders came in. I take points off for the pre-cooking—hot tastes better, though cutting wait time may justify it.

I had a good impression of the shop in Chayamachi. While it was in a convenient location, it was neither small nor crowded, and there was a large balcony. The mood was relaxed and the staff were friendly.

Hawaiian BBQ Hulichiki, close to Hirakata Medical University and one stop from Hirakata Koen Station (near Hirakata Park—an amusement park) made the list because Japan is in the midst of a Hawaiian café boom. And this one seems fairly authentic, though small.

This shop is a local gem. By the way, if you’re looking for the best local breakfast in Osaka, you should know that the Japanese use the word “local” differently than a native speaker would. “Local” here means small (or rural), rather than nearby. So, in the sense that Hulichiki is small and individually owned rather than chain stores, it qualifies as an excellent “local” breakfast joint—whether or not it is near you.

Their morning service runs from 8:00 AM to 11:00 AM. The coffee is high grade: they use specialty coffee beans from local Hirakata roasters, Mahoroba, and brew it with an AeroPress. It may be the best coffee in Osaka—at any rate, it’s the best on this list.

The offerings include French toast made from Danish bread, open-faced sandwich on rye Campagna bread, and a daily special sandwich. If those dishes don’t sound very Hawaiian, you could come later for the broader lunch and dinner menus. But I think you will like the individuality of the place regardless. It would also mesh well either before or after a visit to Hirakata Park, which is—let’s face it—the only likely reason you would be travelling out to Hirakata.

West Wood Bakers has an appealing egg, bacon and (normal) pancake breakfast that resembles what I would make at home. I think the menu will please and that’s why it’s on this list, but for me the atmosphere was too busy. All of the closely packed tables in the compact shop were populated with young women chattering like magpies. I think this may be pleasant in a way, if you are a young woman with friends and can take your share in the chattering. But I came alone and had nothing to contribute. I don’t mean to say that only women can be loud—rather I mean to say that the design of the space was aimed at maximizing occupancy, not at creating a relaxed mood.

Come for the food, if you don’t mind noise. The location is a middling hike from Yotsubashi Station.

The City Bakery in Umeda’s Grand Front Building (basement level 1) made the list because you can eat your food inside or take it to-go and eat it in the large courtyard, “Umekita Plaza” outside—which is a refreshing change in the crowded Umeda area. The indoor area features one very large table, similar to what many Starbucks have, and several smaller tables. If you go for the bacon, egg, croissant, and salad dish, then by all means sit here and eat, but do grab something to go afterwards and enjoy it outdoors. It’s like a picnic, and who doesn’t like a picnic?

So there are my picks, for what they’re worth. But just to recap, if you are going to EXPOCITY, Tennoji Zoo, or Hirakata Park, take the opportunity to try the places near those destinations. The others are clustered in Umeda and near Yotsubashi/Shinsaibashi. Of those, I would go for fluffy pancakes on the balcony of Eggs ‘n Things or at the Elk respectively. Fluffy pancakes rule!

Looking for more restaurants in Osaka? Take advantage of the weather and check out these 7 Osaka cafes with outdoor seating or browse Osaka food experiences!

We strive to be as accurate as possible and keep up with the changing landscape of Japan’s food and travel industries. If you spot any inaccuracies, please send a report.
19
Click clap if you like this post
Chris Loew
Chris Loew reports from Osaka, where he has lived for 20 years. He writes about food, Japanese companies, and marine policy issues. He previously worked for two years in the purchasing department of a Japanese meat importer, and for five years as export director for two Seattle food companies, selling to customers in the Far East. He has co-authored two college-level language texts. When not writing, he proofreads Japanese-to-English translations.
SEE ALL POSTS
You may also be interested in
Osaka