Where to Eat in Ryogoku

Ryogoku continues to be an icon of the Edo era, with the Edo-Tokyo Museum standing proudly as a reminder of Tokyo’s past, as well as the Sumida Hokusai Museum which is dedicated to the artist of the Great Wave off Kanagawa, Katsushika Hokusai. The streets of Ryogoku are home to several sumo stables where sumo wrestlers train daily. When not in practice, these wrestlers can be seen traversing the Ryogoku streets in their kimono (traditional Japanese dress) or yukata (Japanese summer dress).

During tournament season, which is usually held in January, May, and September, one can watch matches at Ryogoku Kokugikan (“Ryogoku Sumo Hall”) along with Japan’s elites, who often occupy the prime seats of the arena. This experience of watching a traditional Japanese sumo tournament is an excellent way to appreciate Japanese culture.

And after an awe-inspiring sumo game or a tour of Ryogoku’s must-see places, there’s no better way to cap off the day than to get your fill of Japanese cuisine at notable restaurants in Ryogoku. Find out where to eat in Ryogoku, including chanko nabe restaurants (a staple of the sumo diet), izakayas, traditional sweets, and even a Michelin-starred restaurant in Ryogoku.

Where to Eat in Ryogoku

Here are some recommended spots to visit for a great meal in Ryogoku!

So, you’ve seen a sumo tournament and probably wondered about what sumo wrestlers eat to maintain their physique. Why not immerse yourself in the sumo lifestyle for a day, with a meal at a chanko nabe restaurant in Ryogoku? Chanko nabe is a type of Japanese hot pot that is similar to a stew cooked with a variety of vegetables, meat, and tofu. It is a hearty meal, especially suitable for chilly winters, which is sure to provide you with the energy of a sumo wrestler. Kappo Yoshiba, touted as the oldest chanko nabe restaurant in Ryogoku, is located in a former sumo stable, with a ring still present at the center of the restaurant. Sometimes they even have in-house entertainment, like piano performances, sumo-themed music, and live shamisen (a 3-stringed Japanese instrument) entertainment. Their chanko nabe course will set you back by ¥6880. Made with ingredients from Toyosu Fish Market, you know it’s a high-quality place to eat in Ryogoku. 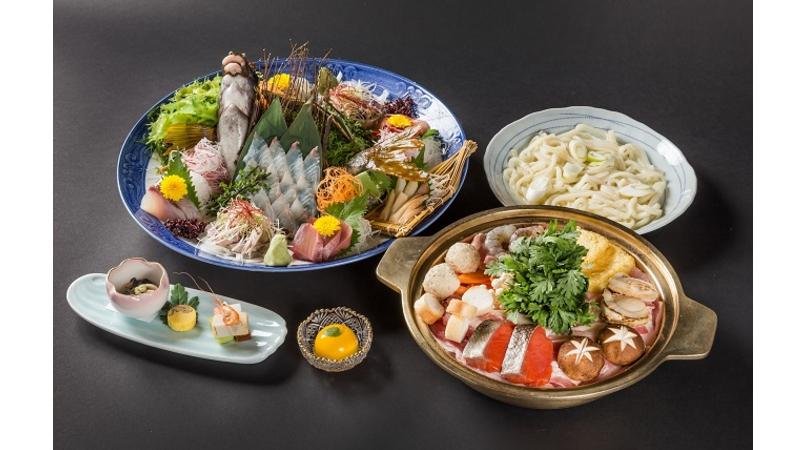 Another well-liked chanko nabe restaurant in Ryogoku is Chanko Tomoegata, which serves three types of chanko nabe. Enjoy one of their 3 chanko nabe kaiseki courses, which are named after sumo rankings. The Yokozuna (highest sumo rank) course includes 9 dishes for ¥8640, Ozeki includes 8 for ¥7020, and Sekiwaki includes 6 for ¥5400. Dishes include appetizer, sashimi, seasonal dishes, chanko nabe, udon, and dessert.

Read more about kaiseki, Japan’s traditional multi-course meal in our Introduction to Kaiseki Ryori, so you know what to expect. Or, if you don’t have the time or the budget for a multi-course meal and would rather just have hot pot, the large chanko nabe will cost between ¥3000 and ¥4320. Types of chanko nabe offered include the soy-sauce flavored version with beef, salty sardine soup with seafood, miso flavor with fish and shellfish, or ponzu flavor with seafood.

Ami Ryougoku Souhonten, a chanko nabe restaurant just minutes away from Ryogoku Station, has mastered the preparation of chanko nabe, and has several varieties to offer for all price ranges. Their seafood chanko is made with scallops, fish, prawns, and squid in a miso-based broth, while the original chicken chanko nabe is made with a soy-sauce based broth and chicken from Kagoshima. They also offer warming curry chanko, fragrant with spices, for around ¥2000 and yaki-chanko which includes an entire domestically-raised chicken with veggies for under ¥3000. If you want to go all-out, try a chanko nabe course meal with a nomihoudai (all-you-can-drink) plan, ranging from ¥6000 to ¥8000 yen.

The sumo-themed izakaya, Happyakuyacho Hananomai Ryougoku has a sumo ring right in the middle of the restaurant. On some nights, they host events such as sumo comedy shows, sumo matches, and even tuna carving shows from 7:0 pm onwards. Their prices are quite affordable, with chicken chanko nabe starting at ¥900. Their nomihodai (all-you-can-drink) and tabehoudai (all-you-can-eat) plan is priced at ¥3,980. In true izakaya fashion, they offer a massive menu including beer, chuhai, cocktails, highball, wine, ume-shu, shochu, and Japanese sake. With both an English and Japanese menu, this restaurant in Ryogoku is very foreigner-friendly.

To add to the Edo experience, head over to Ryogoku Edo Noren. Situated at the former Ryogoku Station, which was built in 1929 and recently renovated, this food court houses several shops and restaurants serving traditional Japanese cuisine and touting local products. The sumo ring, which is used during cultural events, is central to the station. It’s a fun place to congregate to enjoy Edo food culture. 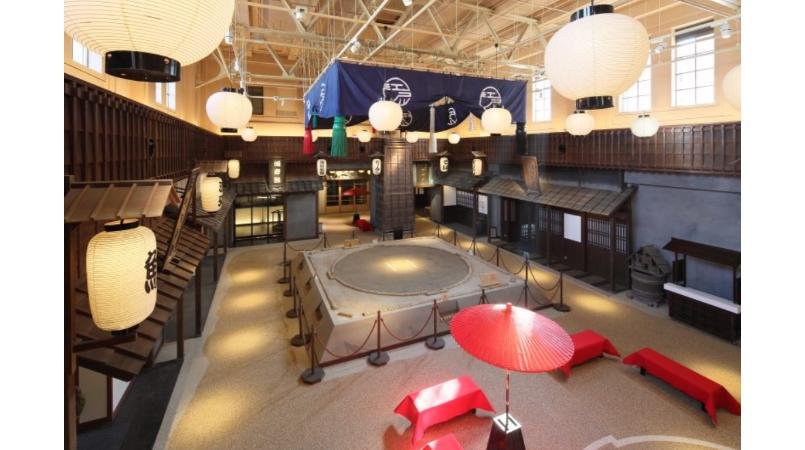 Those who are keen to visit a Michelin-starred restaurant in Ryogoku, check out Edosoba Hosokawa, with one Michelin star. The owner-chef, Takahashi Hosokawa, uses high-grade buckwheat for his soba, which he mills in-house. Popular dishes include chilled kaki soba and anago tempura (battered and fried conger eel). Other dishes are also available to compliment your soba. Meals costs around ¥3,000 to ¥6,000. See our article about the Most Affordable Michelin-Starred Restaurants in Tokyo for more highly-acclaimed eateries. 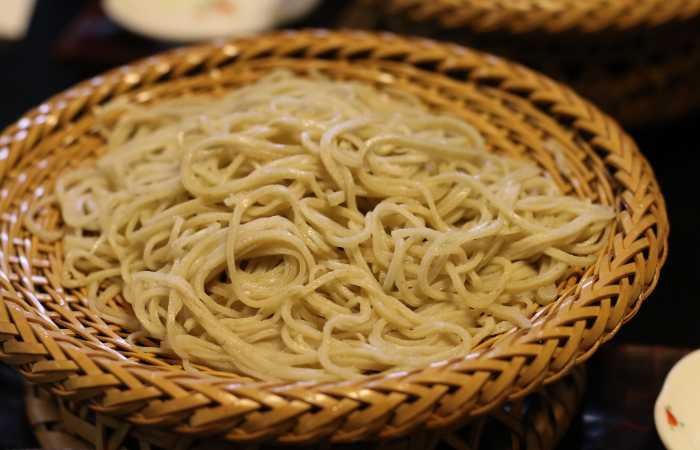 Meanwhile, those with dumpling cravings in Ryogoku can enjoy the timeless taste of pan-fried gyoza at Gyoza Kaikan Bandaisan. This store offers a gyoza challenge wherein gyoza is free for men who can finish 100 gyoza within an hour, and women who can finish 50 gyoza within 30 minutes. There’s a catch though, if you fail the challenge, you’ll have to pay ¥8000. If you do attempt it, try to channel your inner sumo wrestler. The menu is in Japanese, but it should be easy enough to order, just choose the number of gyoza you’d like!

Wondering where to eat in Ryogoku for dessert? Head to Kokugido, founded in 1923. This little Japanese dessert shop sells not only sumo merchandise, but also sweet treats, with a cafe that offers tasty and unusual Japanese desserts. For a sugar fix, order their fan favorite roasted mochi with anko (red bean paste) filling or anmitsu, a type of Japanese-style parfait that includes jelly, fresh fruits, red bean, sweet syrup, and mochi. Read our Beginner’s Guide to Mochi to learn about the wide variety of different types of mochi, so you know what to order.

Another dessert shop in Ryogoku to visit if you have a sweet tooth is Okawaya, which sells seasonal confections and is famous for its Sumida River monaka, a bird-shaped wafer sandwich containing bean paste filling. They also serve seasonal wagashi, traditional Japanese sweets, like sakura mochi. If you’re a wagashi fanatic, learn how to make your own during a wagashi experience in Japan, or check out these other Wagashi Shops in Tokyo.

Cap off your adventure in Ryogoku at Popeye. Pick your favorite beer from their selection of over 70 craft beers on tap. They carry many beers from local breweries and microbreweries across Japan, and with a bilingual menu you’ll be able to find the perfect ale, porter, lager, and more!

Now that you know where to eat in Ryogoku, explore old Edo and sumo culture in this historic Tokyo area. Ryogoku is a heavyweight, with sights to see and food to eat that showcase the best of both traditional and modern-day Japan. For more places to eat like a sumo wrestler, check out The Food of Sumo Champions: Chanko Nabe in Tokyo.

We strive to be as accurate as possible and keep up with the changing landscape of Japan’s food and travel industries. If you spot any inaccuracies, please send a report.
0
Click clap if you like this post
Aleli Dorado
Aleli is a wanderlust whose main itinerary is to culture soak in the places that she sets foot on, sinking her teeth in the gustatory offerings that the place has to offer and knowing the story behind it. Food for her is a marriage of the sights, sounds, smells, and tastes of the rich history of every city she explores and uses the pen as her tool to share to the world each unique experience she unravels.
SEE ALL POSTS
You may also be interested in
Tokyo