What to Eat in Shizuoka: Japan's Riviera

Shizuoka Prefecture is sometimes referred to as Japan’s Riviera as it’s located along the Pacific Coast. It’s also home to the famed Mount Fuji, a UNESCO World Heritage Site, which is one of Japan’s Three Holy Mountains. Mount Fuji plays an important role within Japanese life and is often used as a symbol of Japan which attracts many visitors each year hoping to catch a glimpse or climb up to the summit for sunrise. The fertile land that surrounds the volcano makes for the perfect conditions to grow and produce some of the countries finest foods and drinks, with green tea being the prefecture’s most famous export.

Shizuoka has a lot to offer in terms of authentic Japanese experiences as it is enveloped in rich history, culture, food, and nature. Visit the cascading Shiraito Falls, gaze in wonder at the beautiful Miho no Matsubara or find your zen at the Fuji-san Hongu Sengen Taisha Shrine. It’s perfect for those who like adventure as there are both high mountains and deep oceans to explore, along with everything else in between. Partake in canyoning, surfing, bungee jumping and more within the prefecture. Stroll around Supu Castle, green tea fields, and museums as well as trying all the local dishes that the region is best known for. We’ve got the perfect list of what to eat in Shizuoka, to make sure that you don’t miss out on any of the region's best delicacies.

What to Eat in Shizuoka

Here are some of the top local specialties to try in Shizuoka! 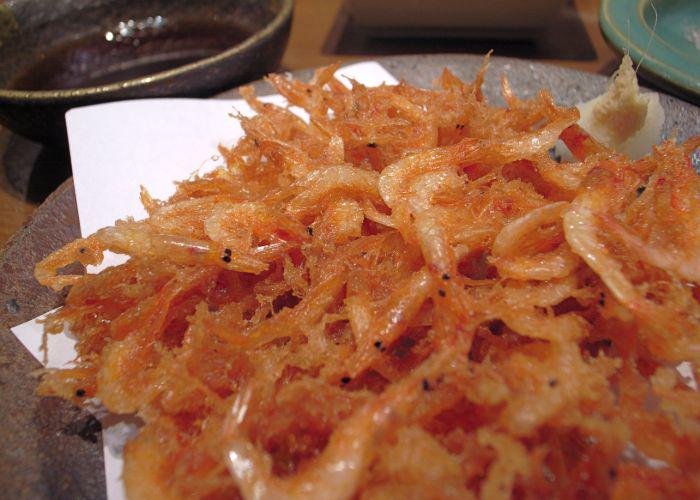 There are only two places in the archipelago of Japan where these little shrimps can be caught; Yui Harbor and Oigawa Harbor, both in Shizuoka. The shrimp can only be caught twice a year and they are popular because of their delicate sweetness. Once caught, they are then dried to preserve their taste. Sakura ebi can be prepared in many ways; boiled, fried, pickled or as sashimi. If you visit in May, Yui holds a spectacular sakura shrimp festival where you can eat as much sakura shrimp as you like! 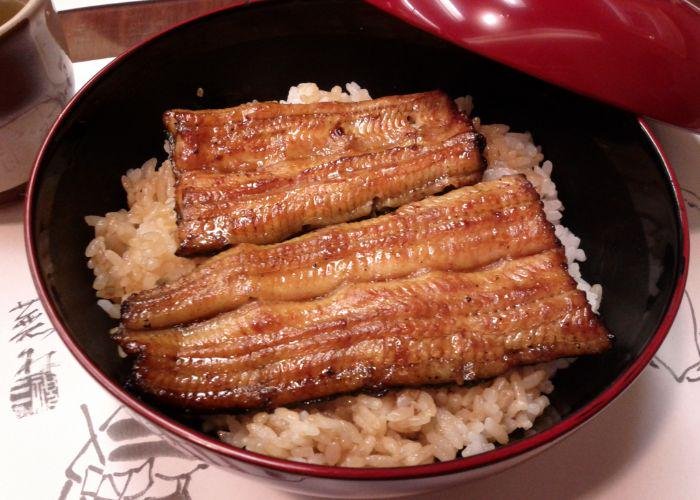 Unagi is a freshwater eel and one region within the prefecture, Hamamatsu, is the top producer of eel in Japan. It’s a delicacy beloved by many and the most common way to enjoy it is over a bed of rice (donburi) as part of a set meal with various complimentary side dishes. It was a dish that started out as a commoner’s food, but it has ascended in true Cinderella fashion into a national delicacy. It’s particularly enjoyed in the summer months, and is a highly favored Shizuoka food. 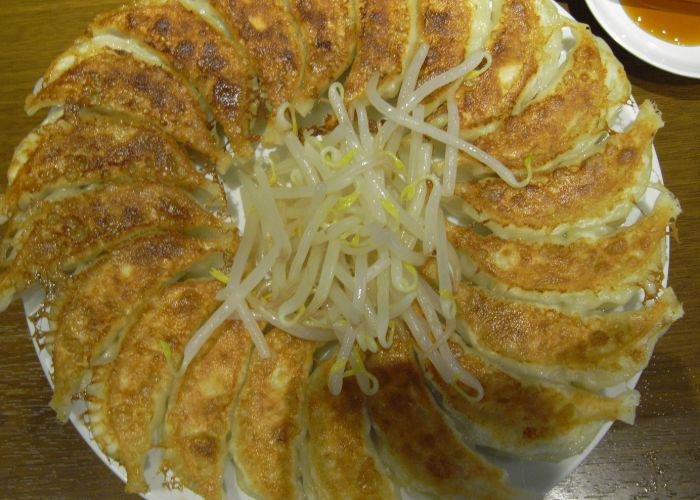 These pan-fried dumplings are a Japanese staple, and are deeply loved throughout the country. Hamamatsu City, in Shizuoka, is famous for gyoza that are filled with minced pork, cabbage, leek, and served with a hefty bundle of bean sprouts. Hamamatsu City actually has the highest consumption of gyoza in the country, making it an essential dish within Shizuoka food culture. 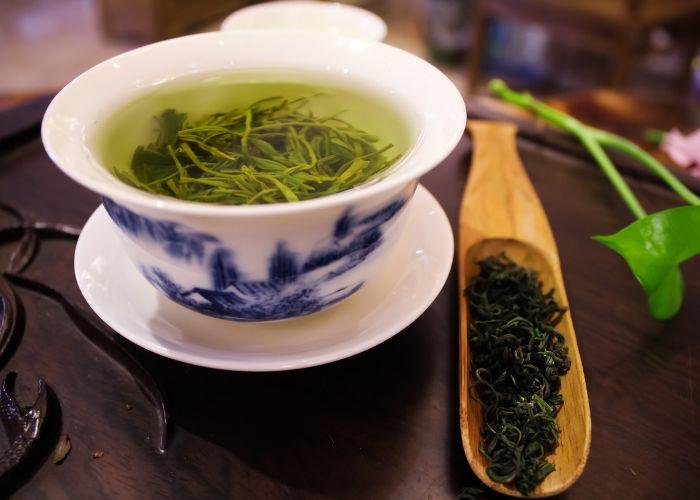 Not technically a food, but the Shizuoka green tea is famed for its quality as it’s grown in the rich soil of Shizuoka’s volcanic mountains. Many think that Kyoto is the green tea capital of Japan, but Shizuoka actually produces 40 percent of the green tea grown throughout all of Japan. The tea plantations here date back to around 1241 when a monk planted green tea seeds that he obtained when on a trip to China. Shizuoka’s climate, along with its high-quality water and proximity to ports make it perfect for green tea production.

The beverage boasts many benefits, as it is loaded with antioxidants and nutrients that can improve brain function, improve digestion, and even reduce your risk of cancer. It’s an important part of Japanese culture and green tea is the central element of the Japanese tea ceremony. The beverage can be enjoyed hot or cold, but there are many other ways to enjoy it. Why not try green tea leaf tempura, green tea ice cream, or green tea waffles; the possibilities are endless! 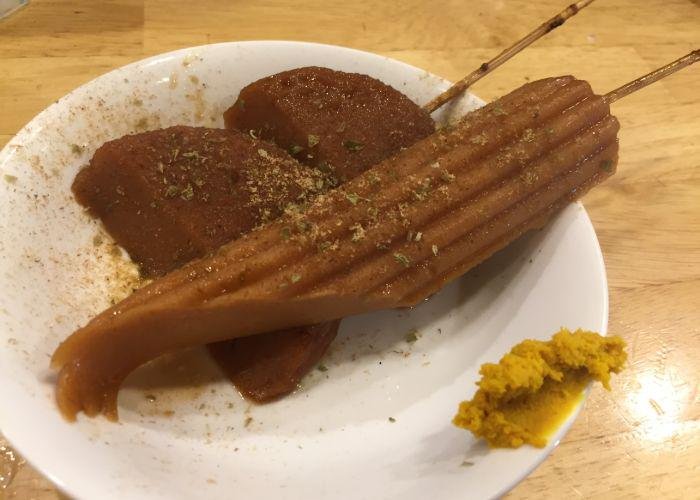 Shizuoka is known for its regional spin on oden, which is typical Japanese comfort food that is especially popular during the cold winter months. This prefecture serves its version on a stick. The dashi (Japanese soup or stock) packs a rich umami punch that’s flavored with strong soy sauce, beef tendon stock and seaweed, dried fish powder and karashi (Japanese mustard). The darker the broth is, the longer it’s been boiling for. Shizuoka city hosts an oden festival every March, so if you’re oden obsessed, make sure you plan accordingly. 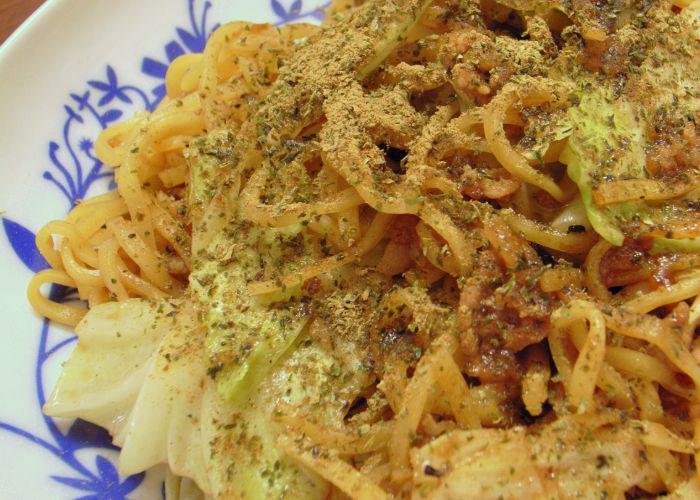 Fujinomiya yakisoba is a regional yakisoba dish that is popular within the district and has been awarded a B-1 Grand Prix, which is a competition for casual inexpensive regional food. There are twelve rules that need to be met in order for the dish to be called Fujinomiya yakisoba. Some of the rules include that the soba noodles need to have been produced in a designated factory within the city of Fujinomiya and pork and cabbage from the local area must be used, topped with dried sardines. The yakisoba is also prepared with beer to deepen the flavor. 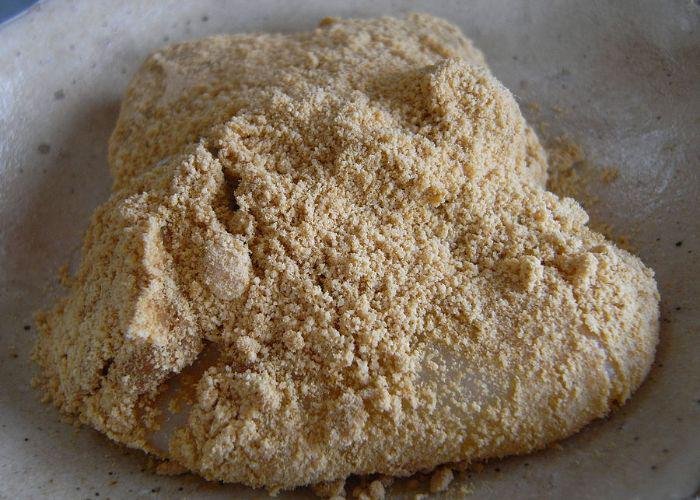 Abekawa mochi is one of the most popular dishes in Shizuoka. The mochi (pounded rice cake) is dusted with roasted soybean powder. It’s incredibly soft and chewy making it the perfect snack to hit that sweet spot. 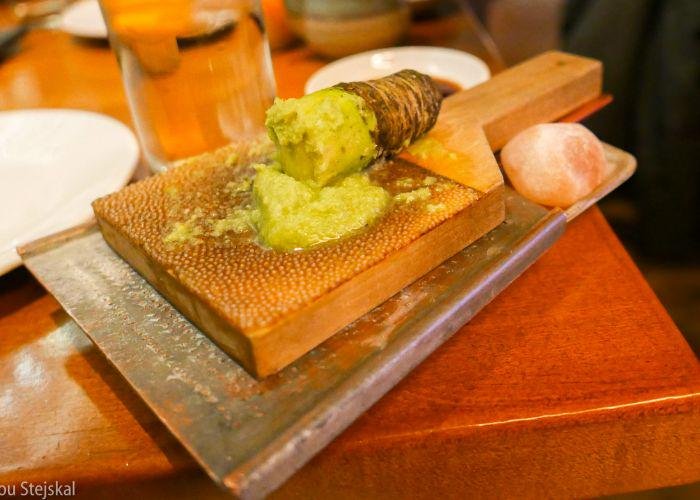 Shizuoka Prefecture is also the birthplace of wasabi, specifically in Utogi. Wasabi is a type of Japanese horseradish that packs a fiery punch similar in taste to English hot mustard with a spice that hits the nose more than the tongue. It’s used as a condiment for sushi and sashimi along with some other foods and a staple within Shizuoka cuisine. Wasabi can be grown in either soil (hatake wasabi) or water (sawa wasabi) and Shizuoka grows some the best wasabi around because of the fresh water that is sourced from Mount Fuji and the fertile soil that surrounds it. You may think you have tried wasabi, but odds are that you haven’t, as most wasabi served outside of Japan is a mix of horseradish, mustard, and green food coloring. Until you’ve tried it freshly grated, you have not tried wasabi!

Now you know what to eat in Shizuoka with byFood’s guide to Shizuoka cuisine. From unagi to wasabi and everything in between, Shizuoka Prefecture offers a great selection of traditional foods, drinks, and sweets that you are bound to love on your visit, proving that there is much more than Mount Fuji to enjoy.

We strive to be as accurate as possible and keep up with the changing landscape of Japan’s food and travel industries. If you spot any inaccuracies, please send a report.
19
Click clap if you like this post
Georgie Morgan
Georgie is a photography enthusiast, ramen obsessed and a self-confessed travel addict. She has visited 49 countries and counting and enjoys eating her way around the world trying unique foods that are specific to each country and region she visits. She hates breakfast food, loves spicy food and can eat eight tacos in two minutes.
SEE ALL POSTS
Stay in the Loop!
We are always discovering the latest foodie trends.Sign up to receive insider tips about the food scene in Japan's most extraordinary areas.