Brief Comparison of Markets in Tokyo

Tokyo’s Tsukiji Wholesale Market was formerly the Mecca for visitors hoping to see exotic fish species and soak in the atmosphere of a working market. Sadly, the popular sightseeing spot was demolished in 2019. A big concern with razing the structure was whether the resident rodents would disperse to neighboring buildings, but in the end the plague of rats did not materialize. Now, the “inner market” wholesalers have moved to the cold-chain preserving, hermetically sealed and vermin-free Toyosu Market. The tuna auction at Toyosu still draws visitors, though it is now by advance appointment and viewed from a glass-enclosed area.

The “outer market” restaurants and shops in Tsukiji are still lively and worthy of a visit. When I went in the fall, they were full of Chinese, Korean, Malaysian and Japanese tourists, poking through the narrow alleys. The only vermin I saw at the lunchtime hour were of the winged variety—pigeons, sparrows and crows. 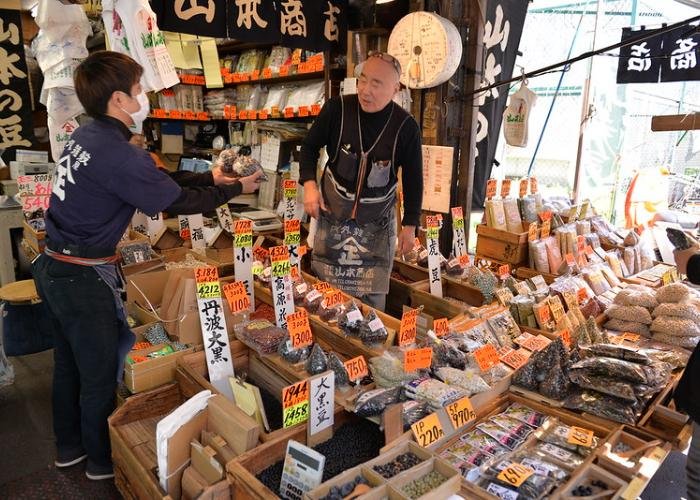 Which Osaka Market Should You Visit?

As for Osaka attractions, I’ll consider the three markets I’ve been to:

The Central Wholesale Market in Noda is a bit dangerous to walk about in with all of the turret trucks dashing around. It’s a real working wholesale market and makes no concessions to gawkers who don’t know enough to jump out of the way. Study groups were previously allowed, but at the time of this writing were stopped due to the novel coronavirus.

Osaka’s Kuromon Ichiba is more of a food-oriented shopping street (shotengai) than a real wholesale market. It’s a good place to try Osaka street food. Located in a shopping arcade near the Namba subway station, it has about 150 shops offering fish, meat and vegetables. The most popular dishes at restaurants and food stalls here are blowfish (fugu), kabayaki-style eel, and takoyaki. But I recommend scallops grilled on the half shell as a quick bite.

Soft-shelled turtle (suppon), though not a common dish in Japan, seems to be featured for the benefit of Chinese visitors, who consider it a delicacy. (Chinese turtle farms raise over 91 million soft-shell turtles annually.) However, I have a Japanese acquaintance who takes her family there to eat turtle once a month. Why—is it good? She says it is. If you’d like to find out, you had better go there. Kuromon has many turtle specialty restaurants.

For me though, because I want to see a huge variety of seafood in a market atmosphere rather than a few tourist-oriented items in a shopping street atmosphere, Osaka Kizu Market is the best Osaka wholesale market. 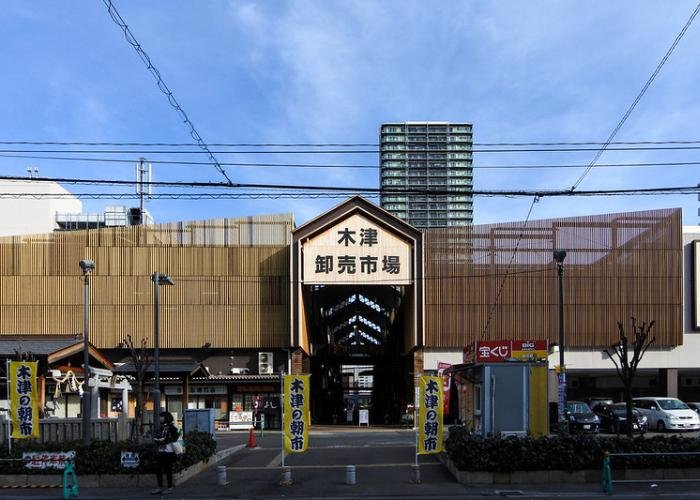 The Kizu area, a little south of Namba, has been the site of informal farmers markets for over 300 years. A public market was officially designated by the city at a site to the northwest of Daikoku Shrine—a different site than at present—in 1810.

In 1926, a central wholesale market system was established to form stable logistics and commercial distribution. This system promoted the idea of one market per city and private markets scattered throughout the country were to be integrated or closed. In Osaka, 30 markets, including the Kizu market, were forced to close. But supporters of a separate Kizu market campaigned and rallied for its preservation. As a compromise, in 1988, a Kizu Distribution Center was established at the Osaka Central Market.

Then, in 1938, it was relocated to its current location and renamed the Kizu Wholesale Market. It was temporarily closed during the war, but was reopened in 1950 as a privately owned wholesale market by volunteers from the former market. In 1974, it was renamed the Osaka Kizu Regional Wholesale Market, and it is now the largest private wholesale market in Japan. Construction for facility renewal was started in 2007 and completed in 2010. 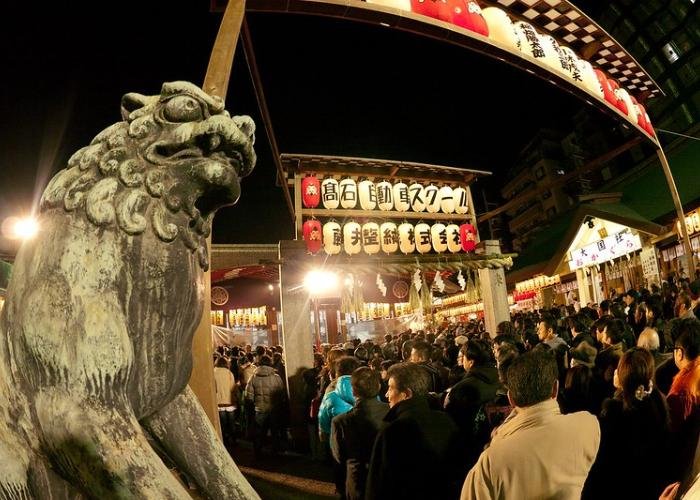 If you’re sightseeing in Osaka in the Minami area in the morning, then why not visit this Osaka fish market?

The easiest destination to combine with Osaka Kizu Market is Imamiya Ebisu Jinja Shrine. Appropriately, the resident god, Ebisu, is the guardian deity for fishermen. But his portfolio has been expanded to include bringing good fortune in business. So, if you’re a business-person, or more particularly a “merchant,” this is the place for you to pick up a lucky charm. The Ebisu Festival is held here from January 9th through the 11th.

The market is closed on Sundays and Wednesdays. Check the website for other closures, as there are some adjustments around various holidays. Twice monthly, on the second and fourth Saturday, there is a tourist event called Kizu Asaichi, ("Kizu Morning Market") where children and adults can enjoy lotteries, auctions, events, and tastings.

There is a real commercial seafood auction at 3 AM and a vegetable auction from 4 AM, but they wrap up quickly, so I doubt that it’s worth figuring out transport at that early hour. Shops open to the public from around 6 AM, and most shops close at 11 AM. For tourists, the hours from 8:30 AM to 10:30 AM are recommended.

Note that the stores are labeled by number on this map on the Osaka Kizu Wholesale Market official website. 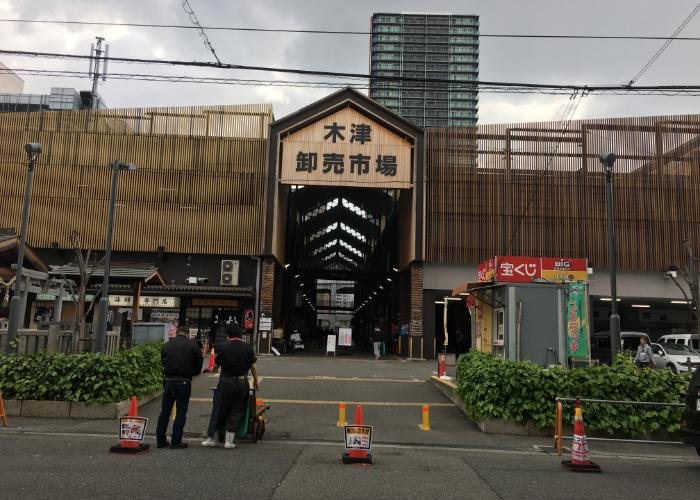 You enter the market through a large arch, which puts you under cover in an arcade with some tables and chairs. 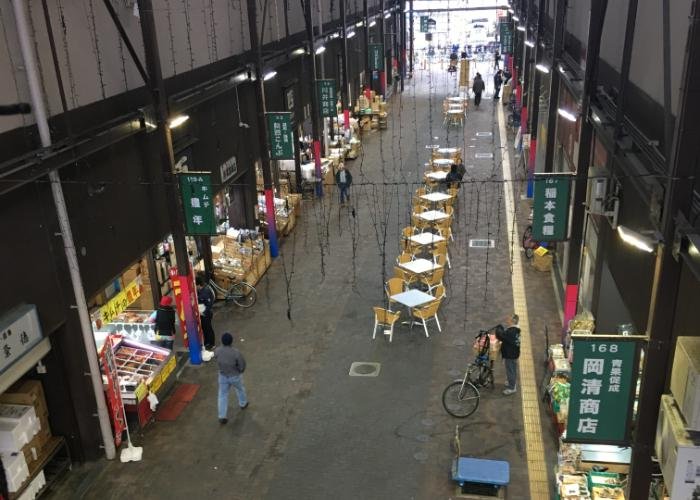 On the right is the ODA supermarket, where you can probably buy anything you couldn’t find in the market. The market hall is on the left. The temperature-controlled hall is separated from the arcade by seven sets of double doors. The closest to the arcade entrance is aisle number seven. Aisles four to seven are for fish (with some other foods like meat and pickles mixed in near the entrances. If you proceed farther down the arcade, the sets of doors from aisle one to three lead to the vegetable section of the market hall. 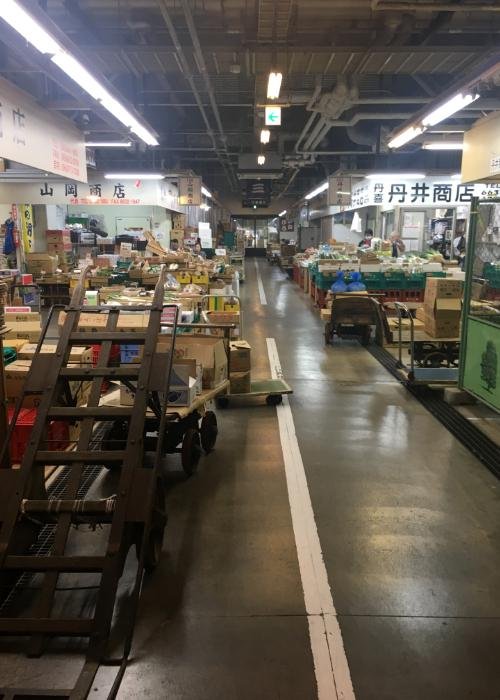 I started in the fish area and bought a large nishigai (Asian rapa whelk) and a watarigani (swimming crab) at Nagara Co., Ltd. I think I overpaid—when I asked the price for the whelk, the answer was 1,000 yen, and I agreed. When I asked about the crab, again 1,000 yen… If you want to haggle, of course you can.

But at least I got to pick the vendor's brain about the seafood. Turns out the crab was a female caught in Okayama Prefecture. He offered to let me have her brother for an additional 800 yen, just to keep the family together. This should have been my cue to offer 600, but there is a limit to how much crab I can eat. 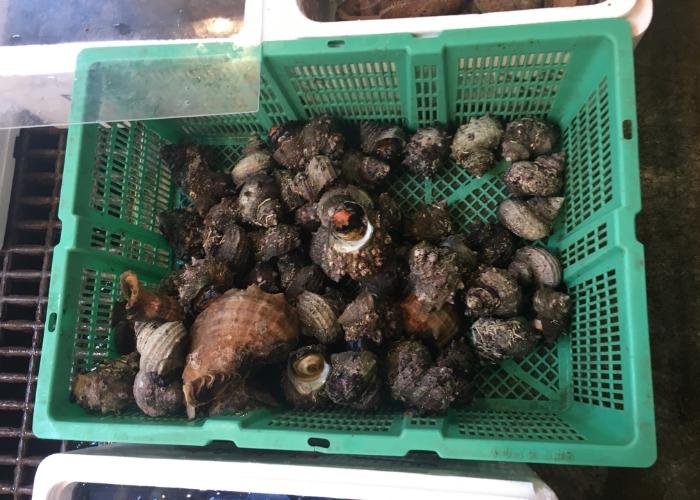 My next deal was better. I bought three shirobaigai (Japanese ivory shell) from Shintaku Shoten Co., Ltd. for the low price of 216 yen (including tax). The shop had an interesting assortment of exotic shellfish. The staff—a couple of old men--were laconic yet helpful in explaining the names of the different items, even writing them down for me, though I only bought three small snails. Importantly, they didn’t quote everything at 1,000 yen. 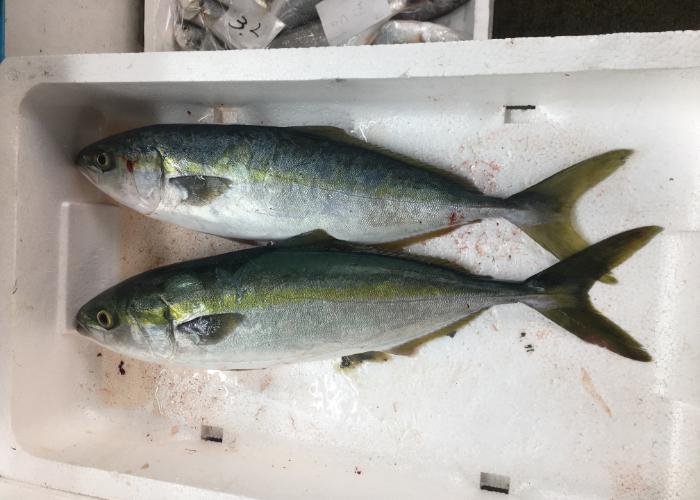 Finally, I got ambitious and bought a 1.2 kilogram young yellowtail (tsubasu) from Takosen Co., Ltd. There are different names for yellowtail as they age and grow, and these vary by region. If my fish had the opportunity to grow, it would eventually be sold as a “buri.” The younger fish has less fat, but you can enjoy the springy texture.

I was more interested in fish than vegetables, because when I see fish for sale at a supermarket, it is often cut up. On the other hand, vegetables appear at the market much as they do in the shops. I found lotus root and bamboo shoot to be the most interesting because I am used to seeing these in a more prepared form. And if you are going to head to Namba for more sightseeing, a bamboo shoot will be less troublesome than a dripping fish.

Ominously, Yamatoku Foods was offering bamboo shoots at a price of… you guessed it, 1,000 yen. But this is still a good deal. In the spring, many (mostly elderly) women boil bamboo shoots with katsuobushi (dried, fermented and smoked skipjack tuna). It is a classic seasonal food. 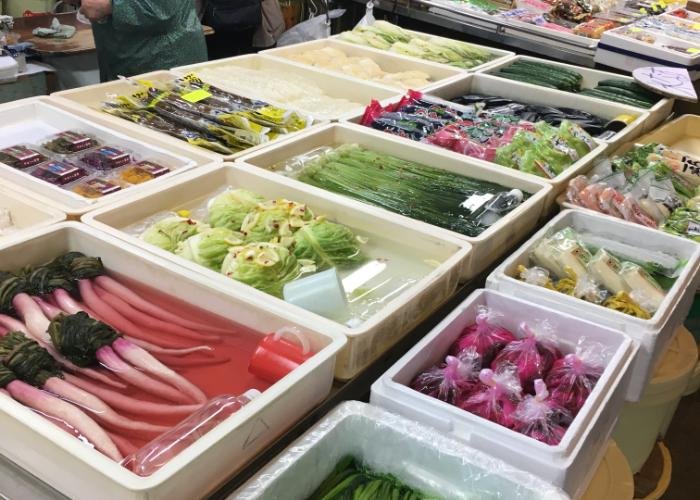 If you’d like your vegetables in a more processed form, Morichiku Shoten offers a wide assortment of pickles (tsukemono). The display is quite beautiful in its color arrangement of whites, yellows, greens and reds. These are not pickles in a jar. They are displayed in bulk, though there are some plastic tubs available too.

Restaurants are located on the outside of the hall to the left of the main entrance. If you pass through the arcade to the outside, there are also some restaurants and freestanding food stalls around a small food court on the left that open in the evening. Some have indoor seating. These were closed when I visited in the morning. 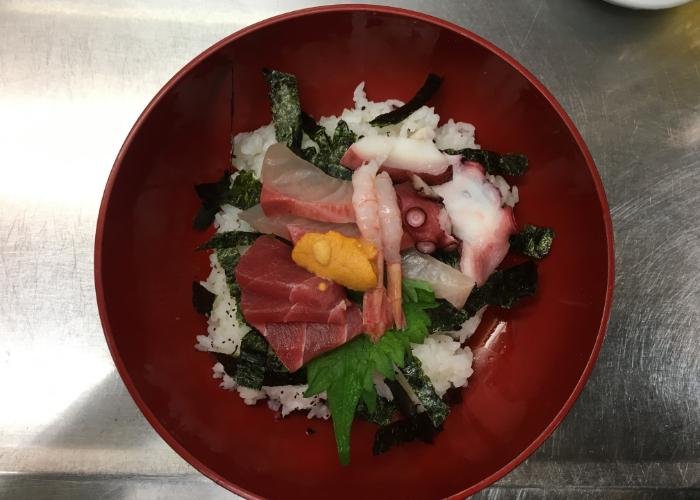 I had breakfast at Ushiro. At a fish market, the best choice is kaisen donburi—basically a rice bowl topped with a variety of fresh seafood. This shop has a “Nokke-don” with five kinds of topping, which comes with hot green tea, for a reasonable 1,100 yen. Mine had tuna, yellowtail, sweet shrimp, octopus, and sea urchin, along with some nori seaweed and a shiso leaf. The old lady who served me chatted in such a friendly way that when I thanked her, said my goodbyes and walked out I forgot to pay… but I was called back. 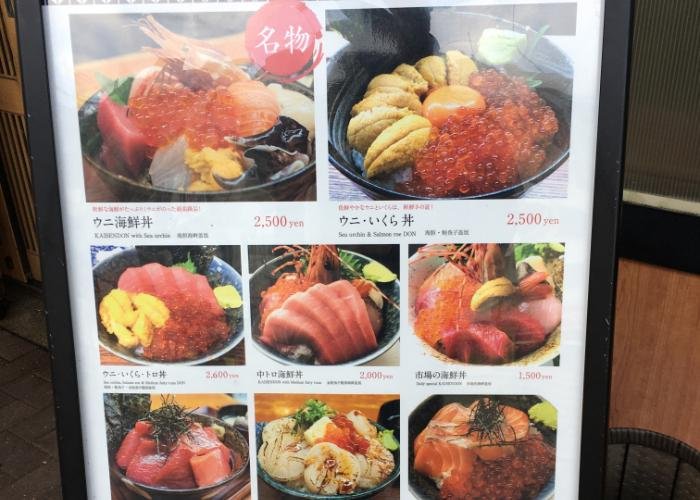 Kizu Uoichi Shokudo (shokudo means “cafeteria”) has similar offerings, but a little more extravagant and more expensive. “Uni Kaisendon” with sea urchin is their signature dish. But it costs 2,500 yen, so I chose the other shop. I don’t know why I didn’t mind to pay 1,000 yen for a giant sea snail, but didn’t want to pay an extra 1,400 yen for a more gorgeous meal. Perhaps because I had never owned a giant snail before. 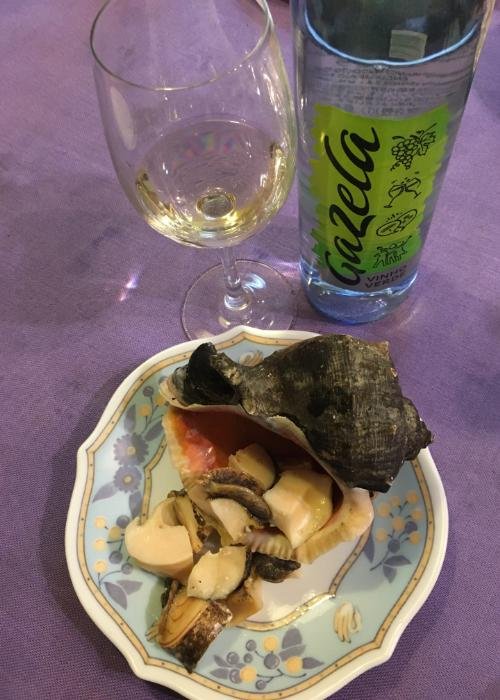 When you buy seafood, the vendor will put it in a plastic bag, perhaps with some ice. This bag will soon start dripping, and will drip all the way home. I suggest you bring a cooler box. Then you will have some freedom to do more sightseeing before heading home. Keep in mind when buying whether you have the facilities to prepare it. 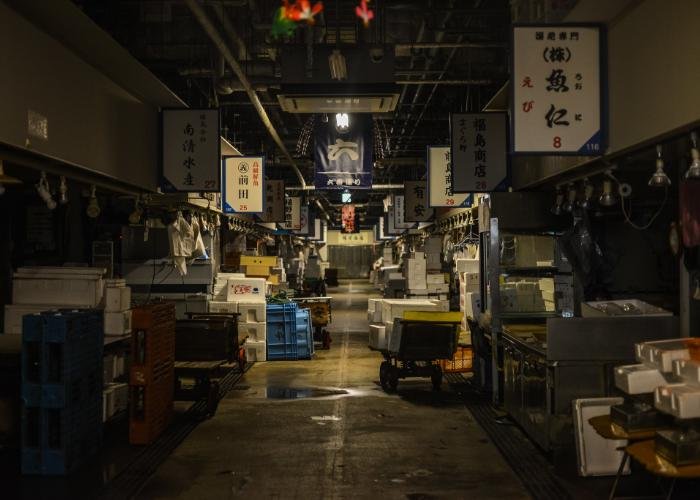 Coming from Umeda, Osaka Kizu Market is most easily reached via the Midosuji line. Get off at Daikokucho Station (Y16, one station south of Namba) and take Exit 1. This will put you at street level facing a FamilyMart convenience store. Turn left, then take the first right and walk straight for two blocks to the entrance. It is also walkable from Imamiyaebisu of the Nakai Koya line.

Read our overview of the 5 best food markets in Osaka to discover more markets and shopping streets, or browse food experiences in Osaka!

We strive to be as accurate as possible and keep up with the changing landscape of Japan’s food and travel industries. If you spot any inaccuracies, please send a report.
5
Click clap if you like this post
Chris Loew
Chris Loew reports from Osaka, where he has lived for 20 years. He writes about food, Japanese companies, and marine policy issues. He previously worked for two years in the purchasing department of a Japanese meat importer, and for five years as export director for two Seattle food companies, selling to customers in the Far East. He has co-authored two college-level language texts. When not writing, he proofreads Japanese-to-English translations.
SEE ALL POSTS
You may also be interested in
Osaka