In the culinary world, there are no Oscars, but Michelin stars, and every chef in the world dreams about being a Michelin-starred chef. Each year, the famous Michelin Guide reviews restaurants in 24 countries from all over the world and delivers the precious award.

The ranking system is divided into three stars; with three stars being the highest score available. Tokyo counts many Michelin-starred restaurants with one or two stars, but the culinary capital also boasts 13 three-star Michelin restaurants while Paris, the motherland of the precious guide book, only has 9.

We've already covered Affordable Michelin-Starred Restaurants in Tokyo for those on a budget and Bib Gourmand Restaurants in Tokyo that are considered "good quality, good value restaurants" by the Michelin Guide. But the capital of Japan also hides three gems in its back alleys, three ramen shops that have been awarded one star each. They are the only ramen shops in the world to have attained the title of Michelin-starred ramen.

But How Are Michelin Stars Awarded?

Launched in 1900 in France, the Michelin Guide has earned a lot of respect in the gastronomy world, and customers follow its guidance avidly. Getting a star is a big deal for a restaurant, it usually increases the reputation and the popularity of the establishment, while losing a star can have the opposite effect.

So how does the guide attribute the stars? First of all, inspectors remain anonymous and pay for their own dishes while assessing the restaurant. They follow a list of criteria such as:

Using Quality Products: The use of fresh produce is essential. No need for fancy ingredients such as foie gras or truffles, fresh and simple ingredients are enough when cooked perfectly.

Mastery of Flavor and Cooking Techniques: The mastery of cooking techniques is mandatory – no over or undercooked products. At the same time, the chef should know how to associate the different flavors and combine them to create a harmonious dish. Some details are also taken into consideration, such as making sure that the food arrives hot at the table.

Value for Money: Defined by the “wow” factor. The value for money is determined by the dining experience: the service, the food, and the ambiance.

Consistency of Food: This is probably the hardest point of all the criteria. Being consistent in the kitchen can be a difficult task for the chef as it often relies on kitchen hands and suppliers.

Ramen is a traditional Japanese food, adored not only by tourists but by locals, too. The popular dish can be found in different forms, with a variety of broths and ingredients depending on the region they are from, such as miso ramen in Sapporo. But in Tokyo, only three shops reached the grail of being awarded a precious star by the Michelin Guide.

In the ranking system, one star means “high-quality cooking, worth a stop,” and we couldn’t agree more! Here are the 3 Michelin-starred ramen restaurants in Tokyo, the only Michelin ramen in Japan! 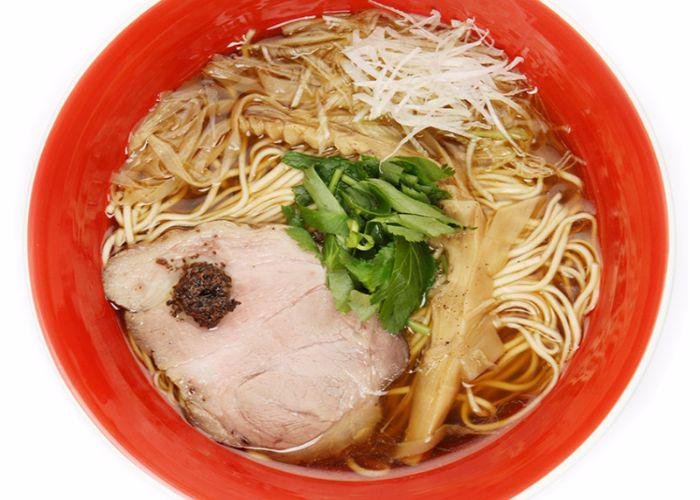 Tsuta ramen is the first-ever ramen shop to receive a Michelin star in the world and it’s definitely worth a try! The pioneer shop’s specialty is “Shoyu Soba,” a unique signature dish made from a delicate house-made soy sauce blend that has matured for two years, combined with a dashi stock made of seafood. The bowl is then topped-up with thin noodles, pork slices, and their unique black-truffle oil, creating a deep umami flavor.

This unique bowl of original flavors was created by Tsuta’s chef, Yuki Onishi. Chef Onishi isn’t a newcomer in the ramen world, his family owned a ramen shop called “Nanae no Aji no Mise, Mejiro.” From a young age, Yuki Onishi followed in the steps of his father and learned from him, following a career path that he left momentarily to become a merchandiser. But thanks to his overseas travels, Tsuta’s chef discovered other culinary cultures and realized the power of Japanese broth. He then returned to his father’s kitchen and developed original ramen dishes. The rest is history, Yuki Onishi opened his own ramen shop and became the first Michelin-starred ramen chef in the world in 2016.

Like every good ramen shop in the city, queuing at Tsuta is necessary to get the chance to dip your chopsticks in that bowl of joy. With only nine seats, it is required to arrive early in the morning, as their queuing system is a bit different. The shop starts issuing a color-coded ticket as early as 7 am; those tickets give you a time slot to come back for your dish. To get a ticket, there is a 1000 yen deposit, which is given back once you are seated.

Once you’ve returned for your time slot (don’t be late!), the traditional ramen vending machine is your first stop to get you closer to your dream ramen bowl. Bring cash as there is no credit card machine, and choose between ramen or tsukemen. Available on the menu are the classic “Shoyu Soba,” the “Shio” (salt) version, and the “Miso” one. Give the ticket to the chef and you’re all set!

Closed on Wednesday and Tuesday night 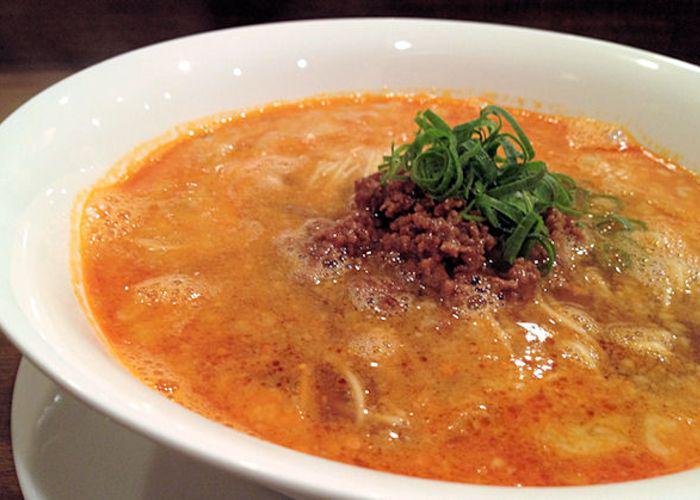 The second Michelin-starred ramen restaurant in Tokyo is Nakiryu, a ramen shop that is highly coveted by locals and tourists. With only 10 seats, it is necessary to queue for a while before eating your bowl of ramen. But don’t worry, the restaurant doesn’t allow more than one bowl per person, helping the queue to move quicker. However, make sure to arrive quite early as Nakiryu has a limited stock each day, and once their out, it’s game over.

Nakiryu owes its Michelin star to their “dandan noodle,” a spicy broth with handmade in house wheat noodles, perfect to suck up the heat from the spices and add another layer of texture to the dish. The ramen bowl is also topped up with the traditional ramen garnishes.

Inspired by the Chinese Szechuan cuisine, Nakiryu offers ramen and tsukemen with different levels of spiciness, from regular to spicy, and also a sanramen, a spicy and sour bowl. It’s a perfect ramen bowl with completely balanced flavors.

If you aren’t into spice, the menu also includes shoyu ramen, with a lighter broth that’s still strong in taste, perfectly paired with a soy-dipped egg and some wontons.

The Michelin-starred ramen shop is unique and cheap, offering the cheapest Michelin meal in the world for only 850 yen.

To order at Nakiryu, the traditional vending machine is at your disposal with Japanese and English translation, to facilitate the order. Although, be mindful that the vending machine accepts only 1000 or 2000 yen notes. 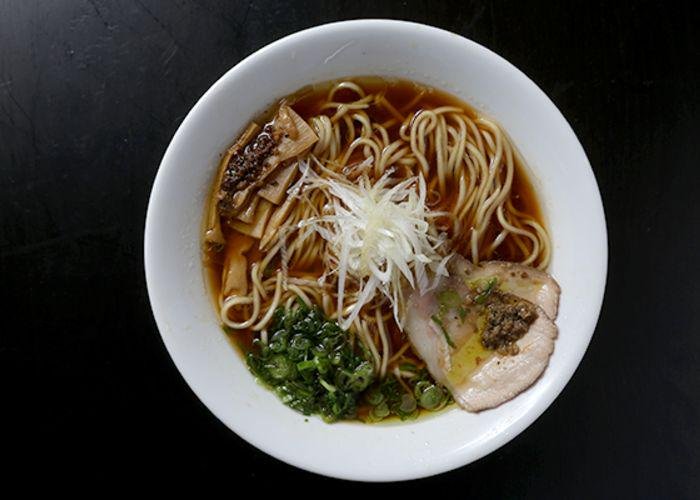 Hidden in the back alley of Shinjuku, Konjiki Hototogisu is the newcomer in the Michelin-starred ramen world; hitting the grail in 2019 with their signature “Shoyu Soba” dish. Konjiki Hototogisu’s ramen bowl is composed of a "triple soup" with homemade noodles. The soup consists of clear pork broth blended with hamaguri (clam broth) and dashi (the traditional Japanese stock). Blended together, those three broths perfectly enhance each other, creating this strong umami flavor. Topped up with porcini oil and flakes and finished with a dash of truffle oil, Konjiki Hototogisu cannot go wrong!

The ramen shop also offers another signature dish, the “Shio Soba” with a clam and red sea bream stock balanced with two different types of salt: Mongolian rock salt and Okinawan sea salt. The homemade noodles are topped up with pancetta, truffle oil, and porcini sauce.

For each bowl of joy, Konjiki Hototogisu’s chef, Atsushi Yamamoto, recommends sipping each sauce first before mixing them together, a way to enjoy each individual flavor before the umami punch.

A victim of its success, the small shop is never empty and people start queuing around 10 am. With only seven seats, the queue can be long, but the wait is worth it!

Not in the mood to line up for Michelin-starred ramen? Browse ramen experiences in Japan and learn how to make ramen noodles and broth from scratch, or taste a variety of types of ramen during a ramen food tour. Or check out our guide to Tokyo Ramen Street, located in the underbelly of Tokyo Station.

We strive to be as accurate as possible and keep up with the changing landscape of Japan’s food and travel industries. If you spot any inaccuracies, please send a report.
0
Click clap if you like this post
Emilie Lauer
Emilie is a passionate traveler always looking for the next adventure. With French and Italian origins, food is her mantra. In Tokyo, you’ll find her in front of a ramen bowl or with her dog, “Sushi.” Her favorite question? What do we eat next?
SEE ALL POSTS
You may also be interested in
Culture