What to Eat in Fukuoka: Kyushu's Rising Culinary Destination

The word is out folks. Ever since Fukuoka made a name for itself in the 2014 Michelin Guide, rivaling the likes of Hong Kong and London, the hidden gem status of Fukuoka has been, well, not so hidden. As of 2019, Fukuoka has 33 Michelin-starred restaurants and 58 Bib Gourmand restaurants, and to top it off, Kyushu's most populous city is ranked as one of the most livable cities in the world by Monocle’s Quality of Life Survey and was included in CNN's 19 Places to Visit in 2019. Naturally, food plays a major role.

If you're wondering what to eat in Fukuoka, be assured there’s umakamon (“delicious food” in Hakata-ben, the dialect of Fukuoka) in every corner of the city. Besides Michelin restaurants, yatai street food stalls offer delicious Fukuoka specialties served in a lively atmosphere at prices that won't break the bank. 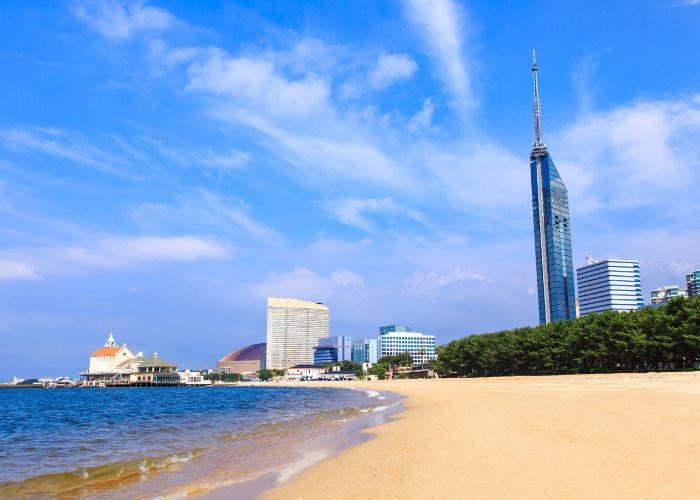 Surrounded on three sides by the ocean, Fukuoka has its share of fish, freshly fetched from the sea. Yanagibashi Market, known as the "pantry of Hakata” is a popular market that has been open since 1916 thanks to the abundant waters of Hakata Bay and the Genkai Sea. Nagahama Fish Market is another spot for seafood lovers, with tuna cutting shows and auctions, and bargain prices.

Sidenote: If you’re wondering what “Hakata” means, the word comes from the old port and merchant town by the same name. After merging with the samurai castle town “Fukuoka” long ago, the city kept the latter name. However, “Hakata” has become synonymous with “Fukuoka,” and is still commonly used to refer to the culture and food of the city. 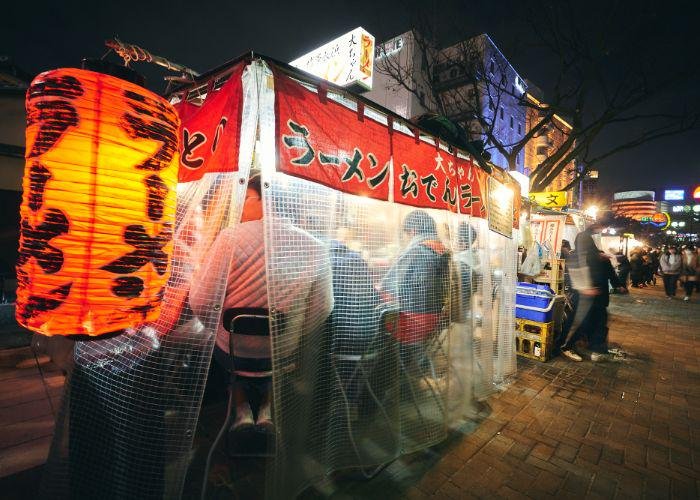 The welcoming orange glow of lanterns beckons you to park yourself on a stool and enjoy some of Fukuoka’s finest authentic foods, from Hakata ramen to classic yakitori, while sitting elbow-to-elbow with locals. Satisfy your curiosity about Fukuoka food culture and what to eat in Fukuoka; read on for our top recommendations.

What to Eat in Fukuoka 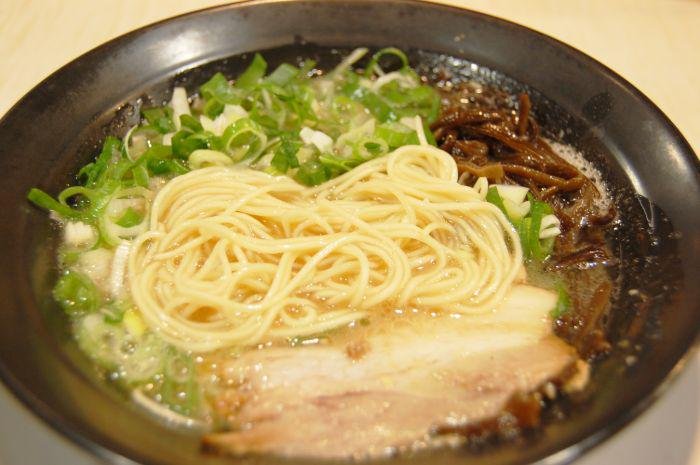 You may have heard of Ippudo and Ichiran Ramen, big names in Japan's ramen scene that both got their start in Fukuoka. If you’ve eaten at these classic tonkotsu chains, you’ve eaten Hakata-style ramen. A milky broth, rich with fat and collagen from pork bones that have stewed away for 8 hours or more, Hakata-style ramen is an indulgent dish. It's considered to be popular among women in Japan, as the collagen from pork bone marrow is said to contribute to skin elasticity and anti-aging. Hakata ramen noodles are straight and thin, just barely cooked so they maintain their al dente texture even amid the residual heat of the creamy tonkotsu broth.

The portion of Hakata ramen noodles you're served might seem a little on the skimpy side, but this is all part of the plan. Here comes that Japanese attention to detail... If a regular-sized portion of noodles was served, the thin noodles would go soggy before you had time to eat them all. This is counteracted by allowing noodle refills, so you’ll get to eat your ramen noodles when they’re at the optimum texture. 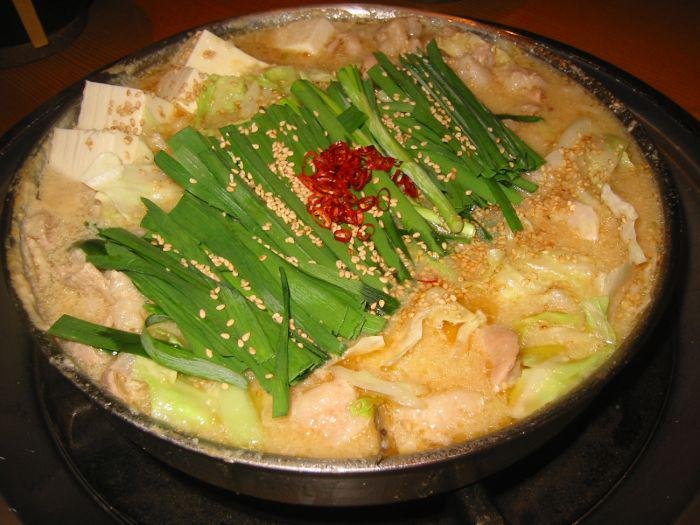 Fukuoka is the birthplace of two distinct types of hot pots, perfect to combat those chilly winter evenings. One is motsunabe. Motsu refers to beef or pork offal, and nabe refers to a hot pot. While not a lot of people are fans of offal (the rather unfortunate homonym doesn’t help its reputation), it’s a good way to use all the parts of the animal ensuring that nothing gets needlessly thrown away. The ethos of mottainai (the sense of regret over wastefulness) is ingrained in Japanese culture, and motsu is enjoyed just like any other part of the animal.

Motsunabe starts with a savory soy sauce or miso-based soup into which beef or pork offal is boiled, before adding ingredients like spring onions and cabbage. The broth gets infused with the flavors of the meats and veggies, and after that, there are really no rules! Feel free to add in more veggies, mushrooms, meats, and even noodles. Like other hot pots, the flavor of the dish goes through an evolution as more ingredients are added, becoming increasingly complex and concentrated. 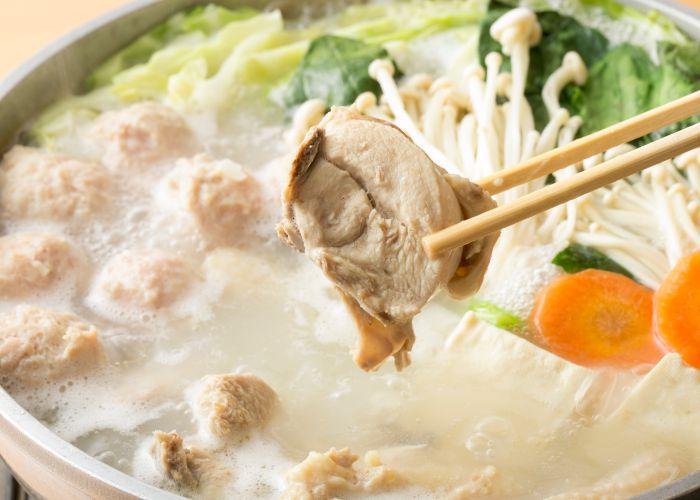 If you’re not sold on the motsunabe, and aren’t swayed by assurances like “It tastes just like chicken,” then there’s another style of Fukuoka hot pot you might enjoy. Mizutaki is a hot pot dish made with chicken stock, chicken meat, and chicken dumplings. The flavor is pure, unadulterated chicken. Of course, there are additional ingredients like cabbage, carrots, tofu, and shirataki noodles to bulk it up, but you won’t forget who the real star of the show is. The citrusy ponzu sauce gives a much-needed brightness to the dish, complementing the natural sweetness of the veggies and the savoriness of the meat. 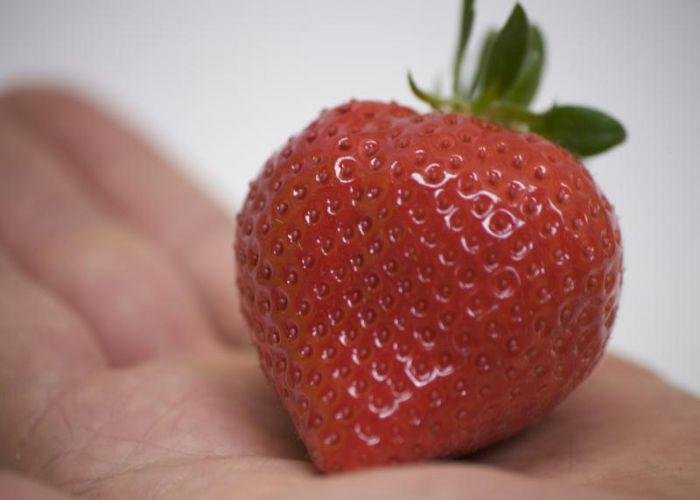 Japan takes its fruits seriously, so when we say Hakata Amaou Strawberries are Japan’s reigning strawberry champion, you know the title carries some weight. Only grown in Fukuoka prefecture, Hakata Amaou strawberries are large, ruby-red, and succulent, bursting with sweet juice. Highly prized in Japan, these strawberries are also exported to Hong Kong and Taiwan. Strawberry picking is a popular activity from winter through spring in Fukuoka, but April is the best time to try it.

Fun fact: The name “Amaou” is actually an abbreviation of several words—amai (sweet), marui (round), ookii (big), and umai (tasty). With a name like that, you bet these are some fantastic strawberries. 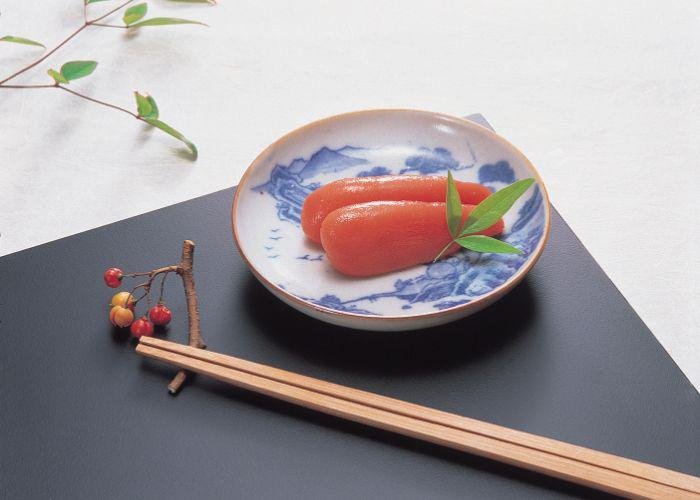 Since the city is known for some of the freshest seafood in Japan, of course, we have to cover what to eat in Fukuoka for all those seafood lovers out there. Mentaiko (pollock roe or cod roe), is a Fukuoka specialty that originated in Korea. A popular ingredient used in all kinds of dishes, from onigiri rice balls to spaghetti to rice crackers, mentaiko can be found in dishes all over Japan, though it got its start in Fukuoka’s yatai street food stall culture.

Mentaiko can be marinated with a variety of flavorings, spices, and sauces, and is an extremely versatile ingredient. Eaten alone, the flavor is not so much fishy as mildly seafood-y. If you want some eggs to go with your eggs, mentai tamagoyaki (mentaiko egg roll) is the dish for you. This Hakata street food has vibrant cod roe wrapped in a beautifully fluffy and pillowy Japanese omelet. 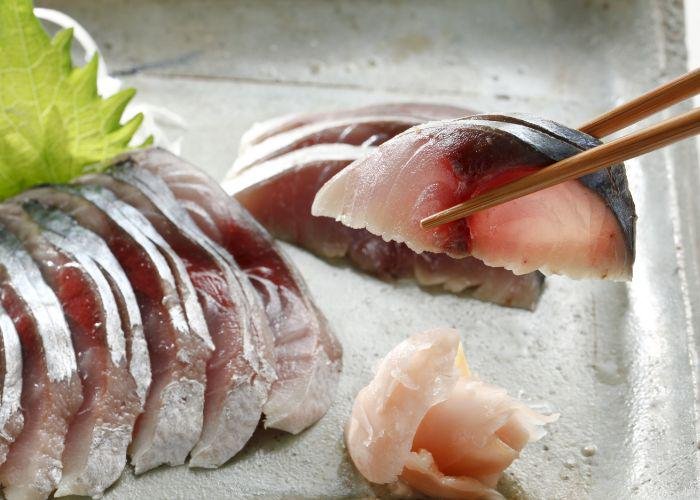 Thanks to Fukuoka City’s strategic location, with mackerel fishing grounds in the Genkai Sea just beyond Hakata Bay, fresh saba (mackerel) comes into Fukuoka City Seafood Market (Nagahama Fish Market) daily. Because mackerel spoils more quickly than other types of fish, it is very rare to be able to eat mackerel sashimi in Japan; Fukuoka City is one of the very few places in Japan where you can try saba sashimi due to its advantageous location.

Goma saba (sesame mackerel) is one of Fukuoka’s delicious local mackerel dishes, consisting of saba sashimi seasoned with ground sesame seeds, mirin (a type of rice wine for cooking), soy sauce, and sake. The aromatic nuttiness of the toasted sesame seeds combined with the sweetness of the mirin and the fattiness of the mackerel makes for an addictingly tasty dish. 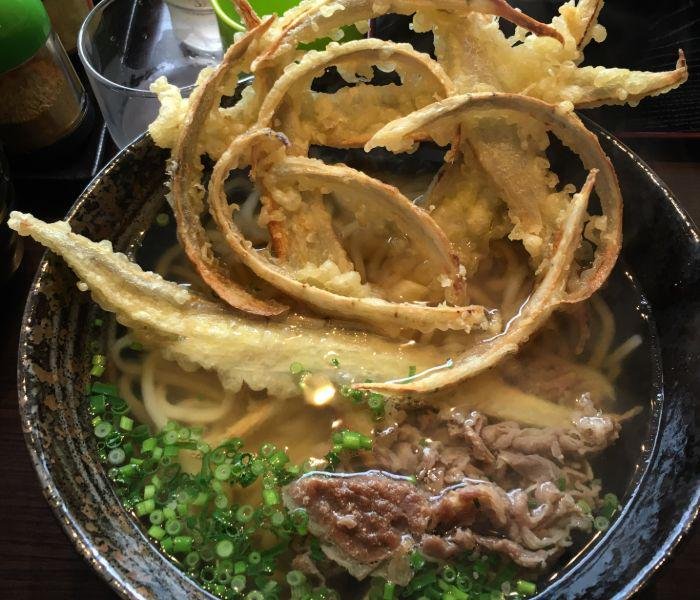 Goboten udon is another Fukuoka signature udon dish, consisting of thick and chewy udon noodles topped with crunchy gobo tempura. Gobo, or burdock root, is a fibrous vegetable with a mild, almost sweet flavor, often used in Japanese dishes. The gobo tempura is prepared differently at various restaurants, sometimes the gobo is thickly sliced and other times it is very thinly shredded before being dipped in tempura batter and deep-fried till crispy. The variations of textures, from the soft and tender noodles to the kari-kari (crispy) gobo tempura, play nicely together, married by the umami flavors of the konbu (kelp) and bonito (dried skipjack tuna) broth. 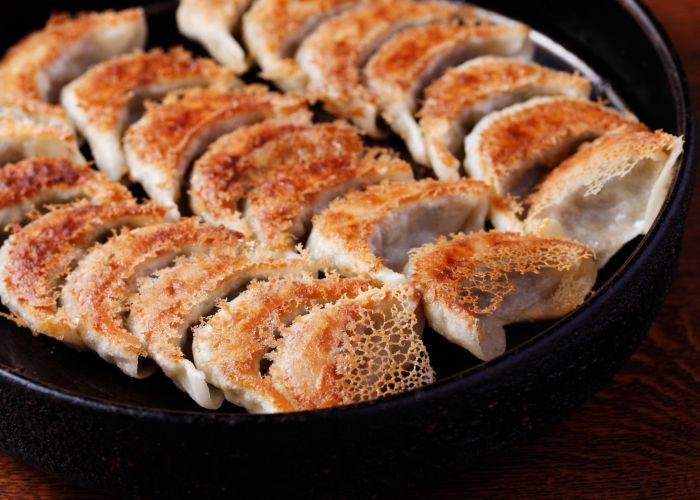 Gyoza is a pan-fried dumpling dish that came over from China by way of Fukuoka. But Fukuoka does their succulent, juicy gyoza a little bit differently, making mini, bite-size dumplings. If you’re a texture person, you’ll love the contrast between the crispy and chewy exterior and the juicy meat filling, especially with that perfect ratio of gyoza filling to skin. It also helps that they’re easy to munch on in between sips of beer. Classic Fukuoka tetsunabe gyoza are grilled and served in a heavy cast iron pan, or tetsunabe. You might want to wait a while to eat them, as they’re served up scaldingly hot, but let’s be honest, you probably won’t. 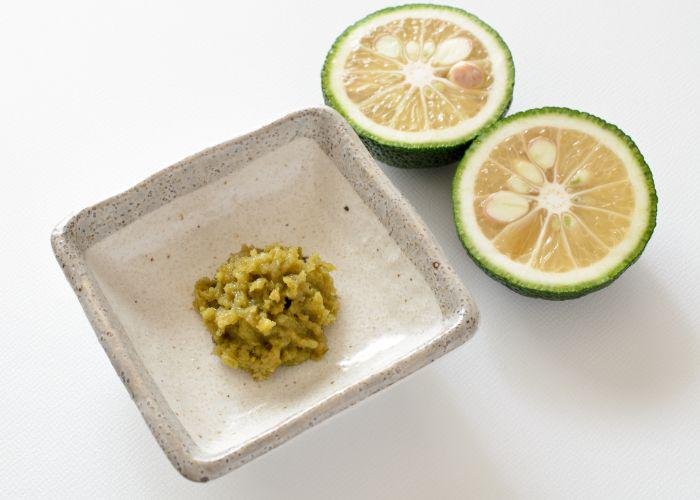 This medley of citrus flavor and chili peppers is bright and vibrant, refreshing and spicy. The peel from the yuzu fruit is combined with salt and chili peppers for a hit of both acidity and spice. To level up pretty much any of the dishes above, from Hakata ramen to gyoza (though we don't recommend it on strawberries), just add some yuzu kosho. The bright flavors will cut through any fattiness or oiliness, bringing vibrancy back to an otherwise drab meal, or giving a zesty hit to a more unctuous and fatty dish. 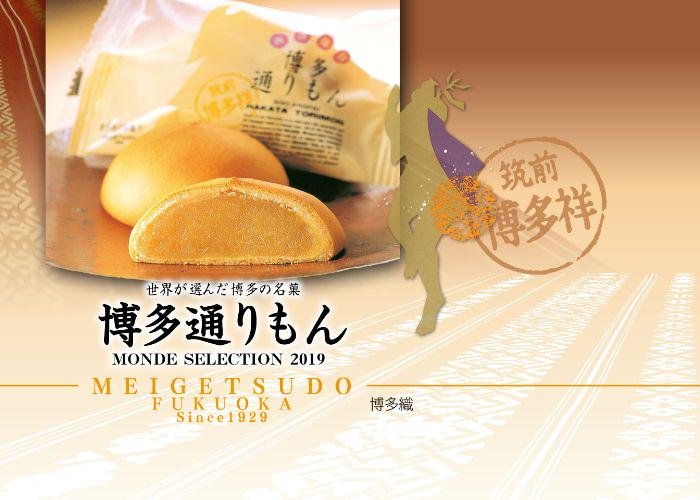 If you’re wondering what to eat in Fukuoka to satisfy that sweet tooth, you’ve got to try Hakata torimon, a manju (steamed bun) unlike any other. A bit of a hybrid between Japanese and Western sweets, rather than the traditional sweet red bean filling, Hakata torimon is made with a mix of shiro-an (white bean paste), butter, cream, and condensed milk, encased in a smooth golden pastry exterior. It’s a dairy lover’s dream, with a melt-in-the-mouth, rich texture. It also makes for the perfect omiyage (souvenir).

With the knowledge of what to eat in Fukuoka, from crispy gyoza to creamy Hakata ramen, plop down in front of a yatai street food stall and order with confidence! Taste the influences of Chinese and Korean cuisine in this up-and-coming gem of a city, while enjoying the mix of urban excitement, traditional craftsmanship, and natural beauty of Fukuoka.

We strive to be as accurate as possible and keep up with the changing landscape of Japan’s food and travel industries. If you spot any inaccuracies, please send a report.
44
Click clap if you like this post
Rika Hoffman
Rika is a sourdough enthusiast, amateur film photographer, and pun-lover, born and raised in the suburbs of Philadelphia. A carb-based lifeform, she is always on the lookout for tasty bakeries in Tokyo.
SEE ALL POSTS
You may also be interested in
Fukuoka