Mention to someone that you’re vegan in Japan, and you’re likely to be met with disbelief or sympathy – how can it be possible to stick to a plant-based diet in the land of sushi and sashimi? Fortunately, however, Japan’s vegan lifestyle scene is growing exponentially, and most of the major cities now have vegan or vegetarian restaurants, or at least ones with clear vegan options on the menu.

There are plenty of animal product-free snacks to be found at konbini (convenience stores) and on supermarket shelves across the country. Many common Japanese foods are also vegan, like wagashi, soy milk, and tofu. However, there are some landmines to watch out for if you're maintaining a vegan life in Japan. That's where this guide comes in.

This blog post is broken into two sections. The first features vegan restaurant guides for Tokyo, Kyoto, Kobe and Osaka, Nara, Hiroshima, and Okinawa. Each guide includes a helpful list of vegan restaurants in the area.

The second section contains our top tips and tricks for surviving as a vegan in Japan, including a handful of helpful Japanese phrases you'll need to know when dining out.

Additionally, you can also browse our directory of vegan and vegan-friendly restaurants in Japan. ByFood also provides a mostly free online service that allows you to make restaurant reservations (note that some premium restaurants require paid reservations) in English.

Want to enjoy dining out while traveling in Japan? Check out these guides covering vegan restaurants across Japan! 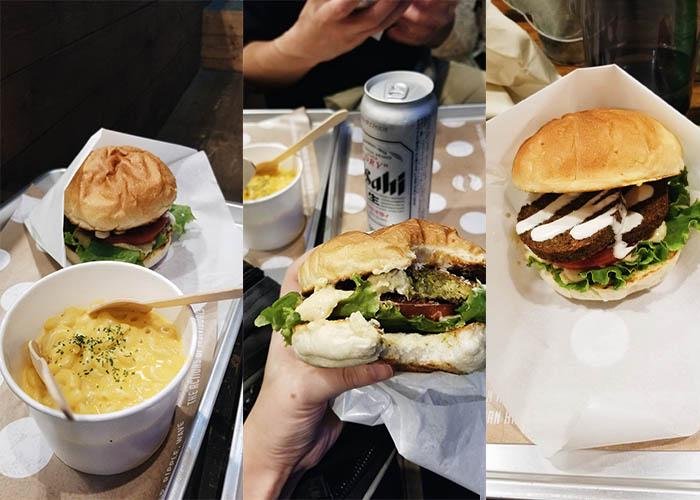 In addition to restaurants, there are a whole host of vegan food experiences in Tokyo that you can enjoy. For example, you can try your hand at making vegan sushi or traditional wagashi sweets, or take a tour of one of Tokyo’s many gourmet neighborhoods. 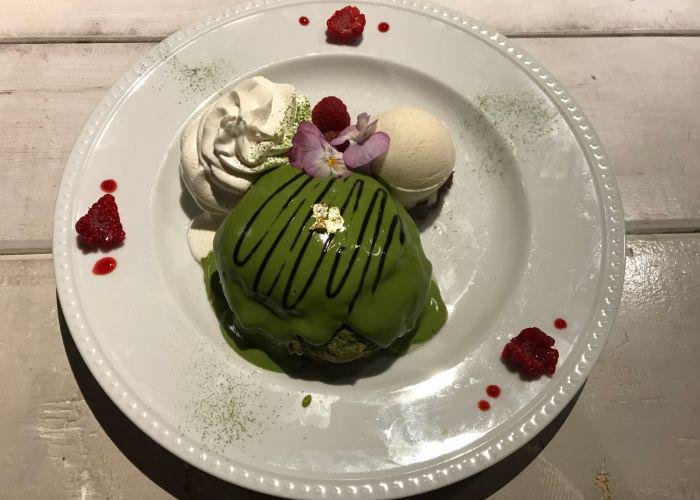 Kyoto is one of the most vegan-friendly cities in Japan, not least because of its long history with the vegetarian Buddhist cuisine, shojin ryori. Kyoto-style cuisine is generally plant-based, so it may be easier to find veg-friendly items. Take a look at our Kyoto Vegan Guide for our suggestions of the best places to eat here, whether you’re looking for an upmarket meal, a decadent dessert, or some delicious vegan junk food.

You can also search for vegan food experiences in Kyoto, like exploring the inimitable Nishiki Market, indulging in an exquisite multi-course kaiseki meal, or sampling the very best Japanese green tea in the nearby town of Uji. 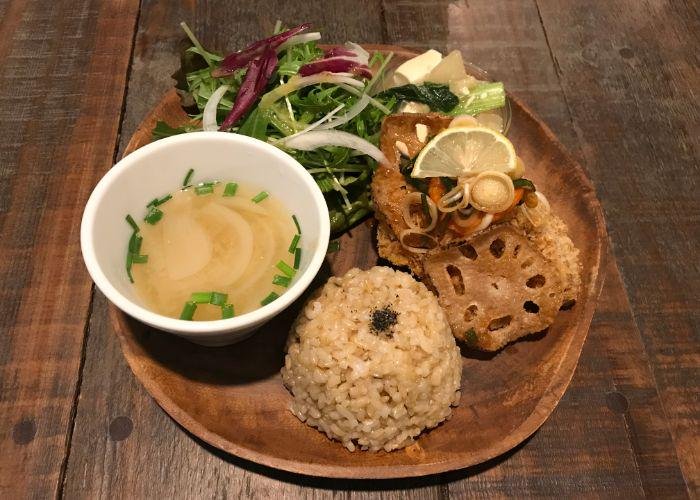 Covering two of Kansai’s other major cities, our Kobe and Osaka Vegan Guide is ideal if you’re spending some time traveling around this area on your trip to Japan. Don’t be put off by Kobe’s beef-heavy reputation – it also has plenty of restaurants where you can enjoy vegan Japanese cuisine.

As you might expect from the city known as “Japan’s Kitchen,” there are several vegan food experiences in Osaka you can take part in, including street food tours, and cooking classes where you can create your own tempura and ramen. 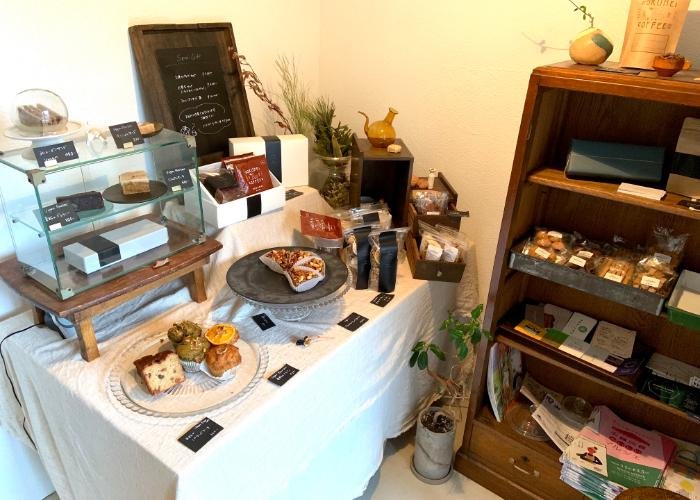 It may come as a surprise, but even the compact, historic city of Nara has several dining options if you’re vegan in Japan. Have a read of our Nara Vegan Guide for the lowdown on some of the best restaurants to check out, including eateries offering locally sourced vegan Japanese food, an adorable sweet shop, and a craft beer bar serving plant-based bar snacks; ideal for keeping you fueled as you explore the city’s many great sightseeing spots. 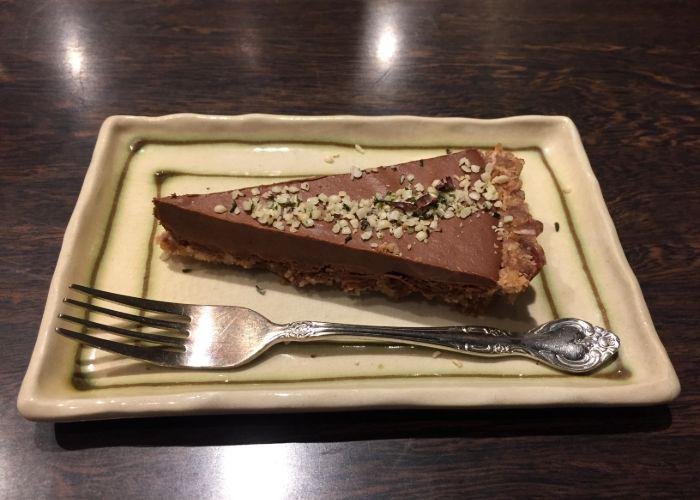 This vibrant and cosmopolitan metropolis has a selection of great vegan-friendly restaurants you can eat at during your stay if you’re plant-based in Japan. Check out our Hiroshima Vegan Guide for an overview of what’s available, whether you want Indian, Mexican, vegan desserts, or okonomiyaki (the city’s most famous local dish).

There are also a number of vegan food experiences in Hiroshima to try, from food tours to tea ceremonies to cooking classes where you can learn how to make traditional higashi sweets. 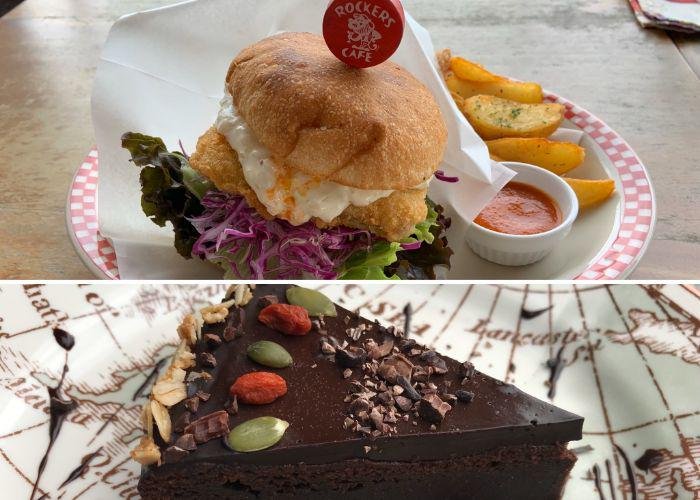 In addition to being a paradise for beach lovers, Okinawa is also a paradise if you’re vegan in Japan. The Okinawa Vegan Guide outlines some of the amazing vegan and vegan-friendly restaurants on the main island, with menus ranging from traditional Japanese food and health-conscious meals, to Mexican and American-style dishes. This plant-based cuisine is the perfect eco-friendly addition to the prefecture’s pristine coastlines and crystal-clear waters.

Tips for Vegans in Japan

Here are our top tips for maintaining a plant-based diet in Japan. 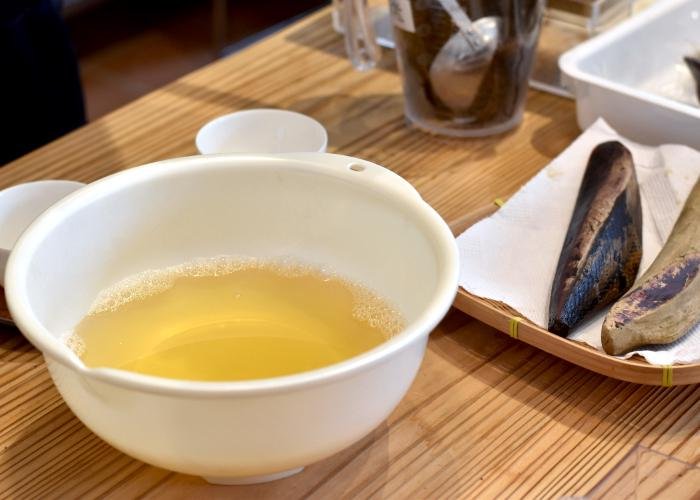 One of the great things about traveling to Japan is trying all the amazing local food on offer. Being vegan doesn’t mean you have to miss out, as there are plenty of plant-based versions of Japanese dishes available, and vegan restaurants to enjoy. However, there are a couple of ingredients to avoid that tend to show up a lot in Japanese restaurants: dashi and katsuobushi.

The use of katsuobushi (dried fish flakes) in dashi (soup stock) means that many Japanese broths are not vegetarian or vegan. Besides soup, katsuobushi is used to season all sorts of dishes – even ones that may look vegetarian or vegan – so keep an eye out and ask your server if you’re unsure. The safest bet is to eat at vegetarian/vegan restaurants when possible, as the presence of animal products can sometimes be undetectable.

One of the biggest challenges for travelers in Japan is the language barrier. We’ve previously covered some basic Japanese phrases for dining out, but if you’re vegan in Japan there are certain other phrases that might be useful to know – particularly if you’re planning to eat at omnivorous restaurants and want to avoid meat products.

However, you might find that servers don’t have a good understanding of what “vegan” means, so instead you can use the following phrase:

If you’re curious about a particular dish, you could ask:

You can then fill the gap with any of the following ingredients:

You can also ask if it’s possible to have a dish without a certain ingredient, for instance:

Could I please have the ramen without an egg? ラーメンは卵を抜きにしてもらえますか？(Ramen wa tamago o nuki ni shite moraemasu ka?) 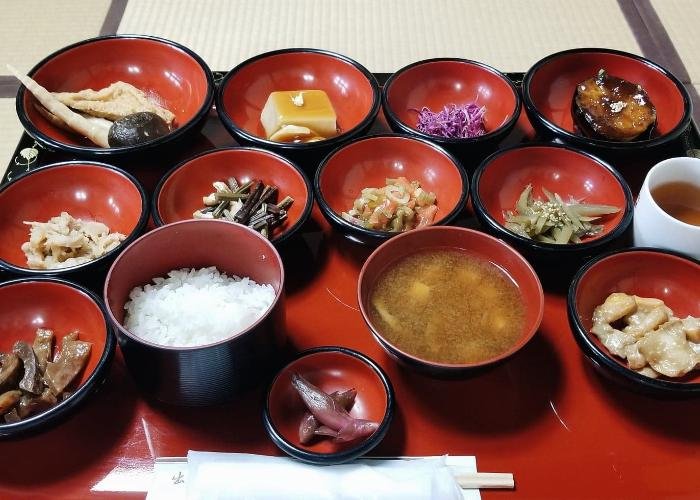 If you’re vegan in Japan, one type of food you absolutely have to try is shojin ryori. This is a traditional type of Japanese Buddhist cuisine that is always vegetarian and usually vegan, adhering to the tenants of Zen Buddhism. 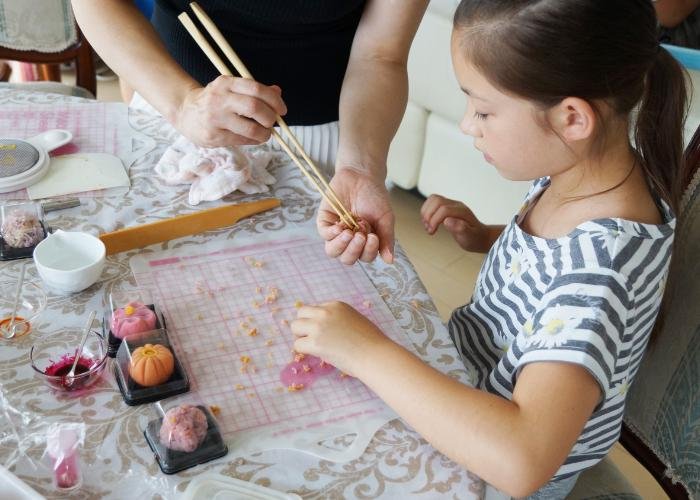 Eating out while you’re here in Japan is one thing, but if you want to be able to enjoy authentic vegan Japanese food after your trip, why not try a vegan cooking class? Have a go at hand-making soba noodles from scratch, constructing adorable character bento boxes, or crafting exquisite traditional Japanese sweets called wagashi. You could also take a vegan sushi cooking class or a vegan ramen cooking class to equip you with all the knowledge and experience you need to recreate these classic Japanese dishes at home. 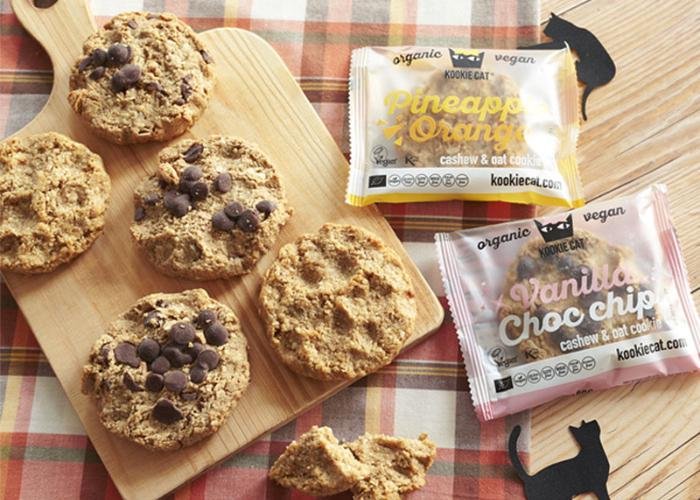 Even regular konbini have plenty to offer though, from onigiri rice balls filled with seaweed, umeboshi (pickled plum), or natto (fermented soybeans – an acquired taste!) to Biokura macrobiotic cookies that come in a whole range of Japan-inspired flavors including sweet potato and Japanese mugwort. Mochi (rice cakes) and other traditional Japanese sweets are also often vegan. While 7-Eleven, Lawson, and FamilyMart are all good options, if you can find a Natural Lawson store, these usually have a wider selection of vegan snacks. 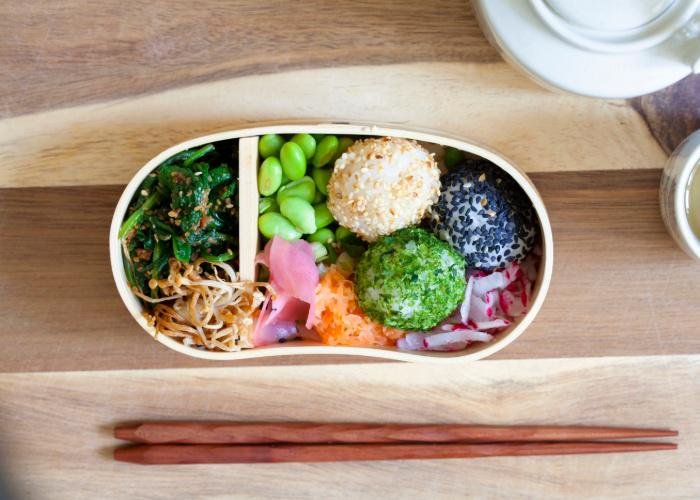 Hopefully, this article has given you more confidence to travel to Japan as a vegan. While it may not seem easy on the face of it, Japan’s vegan food industry is growing and there are now a wealth of vegan restaurants and a lot of great vegan food to enjoy here. With a little forward planning, you’ll soon be tucking into some of the best vegan dishes you’ve ever eaten! Itadakimasu!

If you enjoyed these tips about the vegan lifestyle in Japan, join our Facebook group, Discover Japan by Food, and scroll down to subscribe to our newsletter!

We strive to be as accurate as possible and keep up with the changing landscape of Japan’s food and travel industries. If you spot any inaccuracies, please send a report.
0
Click clap if you like this post
Ashley Owen
Ashley is a freelance travel writer from the UK who spent the last two years living in Japan, and is about to embark on her next adventure to New Zealand. She's always on the lookout for exciting new vegan treats wherever she goes!
SEE ALL POSTS
You may also be interested in
Kyoto

What to Eat in Kyoto: Local Specialties in the "City of Ten Thousand Shrines"